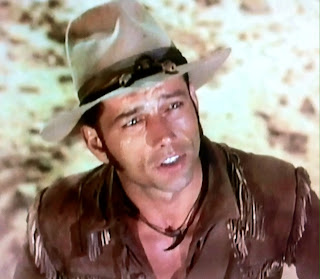 Your lives are meaningless compared to HONDO!


Southwestern Telegraph Company is expanding through Apache territory, making good progress at up to five miles of wire per day.  Vittoro gives the project his tentative blessing, but renegades led by Delgado manage to make Redell's first demonstration to the Chiefs a very public failure, massacring Southwestern's repair crew and wounding Hondo.  Moving in for the kill, Delgado sees Lane wearing Vittoro's eagle claw and recognizes Lane as Emberato.  Learning also that Hondo doesn't work for Southwestern, the renegade's leader relents, with a message for Lane to deliver if he lives.  "Tell Redell that he will die with his singing wire!" 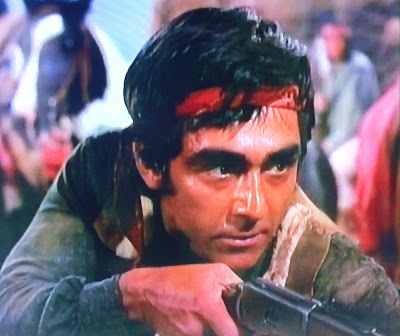 Picking up on a clue from the encounter, Hondo lives to convalesce at the home of Dr. Stanton, a fugitive from justice whose location is known only to the Natives.  Meanwhile, Redell pressures the Army to mount an offensive against Delgado's men.  Captain Richards eventually agrees, but it soon becomes clear that the conflict between Delgado and Redell is a very personal war with the latter considering anyone to be acceptable collateral damage. 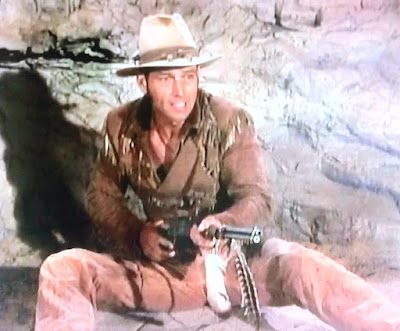 Directed by William Witney (DARKTOWN STRUTTERS) and written by George Schenck (BARQUERO, CRAZY LIKE A FOX), Hondo and the Singing Wire is ostensibly about establishing a needed telegraph service while winning the cooperation of the Apaches and neighboring tribes.  Like that other renegade Silva in the preceding episode, Delgado vows death to the white man who wishes to take Native land.  Any commonality between the two agitators stops there, however. 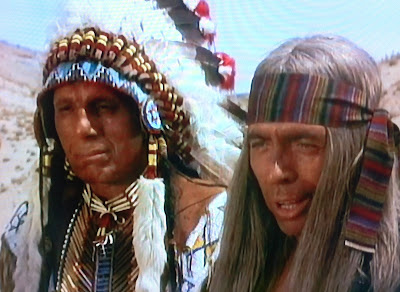 Unlike the disdainful and bloodthirsty Silva, Delgado respects Chief Vittoro, and is only after one white man--not them all.  This dissident is just using the expected rhetoric as a recruiting tool in his personal vendetta against the Southwestern Telegraph company and its owner specifically.  Delgado (whose father was a white settler) has much in common with fellow half-Apache Hondo, something that helps Lane survive their initial skirmish.  Delgado is seeking revenge against the man and the entity that he holds responsible for the death of the person he loved most--just as Hondo himself did during the Civil War. 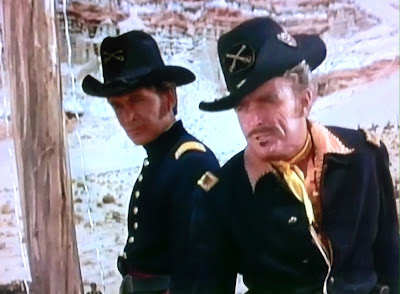 Delgado kills several employees and soldiers in the process, but also offers to spare everyone remaining if Redell is turned over to him.  Given his backstory, the renegade isn't entirely unsympathetic.  The same can't be said for racist, condescending Redell, who proves to be completely uncaring of any life other than his own.  As Buffalo aptly puts it: "he's lower than a snake's belt buckle!"  (Not to spoil anything, but we learn that the acorn didn't fall far from the tree, either.) 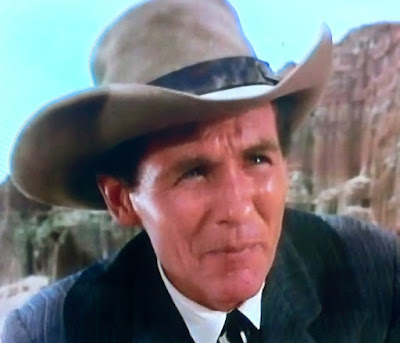 While the regulars take something of a back seat to this grudge match, Hondo and the Singing Wire isn't stolen from them entirely.  Hondo Lane gives further evidence of his resourcefulness and his scouting expertise, and Buffalo mulls a career change (to bounty hunter) near the end of his hitch.  Captain Richards' rigidity is put to the test during the pursuit of the renegades. 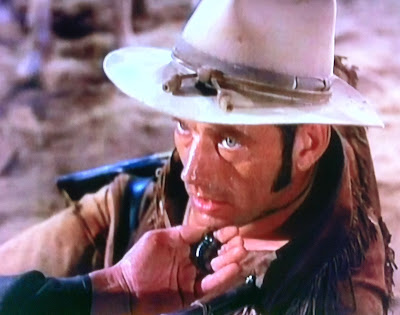 HONDO continues to boast a tremendous supporting cast on a weekly basis.  Lopez (DEATH WISH 4) is properly intense with the episode's plum part, while Conway (TOMBSTONE TERRITORY) does what he can with a one dimensional villain.  Iron Eyes Cody plays a Chief for about the 194th time, and to the surprise of no one familiar with his roles post-RED RYDER, Donald 'Red' Barry's Sergeant turns out to be an opportunistic douche. 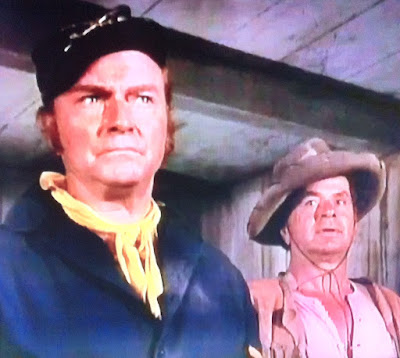 The most memorable impression among the guests is left by another B-movie vet, Donald Woods (NEVER SAY GOODBYE), who has the meaty part of the compassionate but understandably reluctant physician. 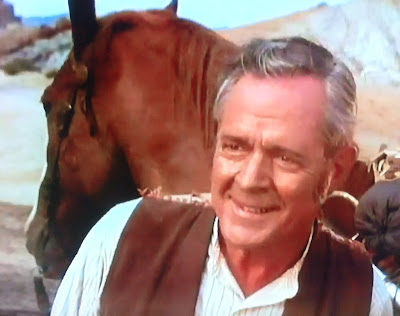 Hondo and the Singing Wire is intriguingly scripted by Schenck, unfortunately fizzling in its final act with one head-scratcher of a plothole: what happened to Delgado's contingent after they surrounded their cornered prey?  It seems more than implausible that they'd all disperse and disappear, since we didn't see Delgado dismiss them.  And why would he?   Doing so would be giving up his huge strategic advantage, which Delgado maintained throughout--he was always two or three steps ahead of the Army and Hondo, even.    Delgado's followers are presented as true believers, so you'd certainly think they'd appear and open fire during the denouement if they've been camouflaging their presence.  It is completely out of character for the calculating renegade, marring an otherwise above average segment. 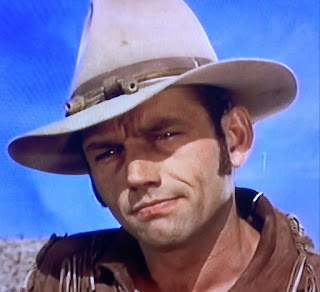 Hondo Lane was busy recouperating from his bullet wound for most of the first half of Singing Wire, and only ends up throwing one punch the entire episode, understandably decking Redell with it.

Since Hondo and Buffalo are too busy to stop in for a beer, Fort Lowell's answer to Madison Square Garden suffers no property damage in Hondo and the Singing Wire. 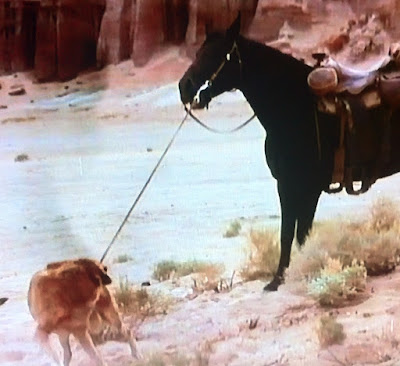 When Hondo is wounded, it's up to Sam to bring him his horse and help lead him to the Doctor.  Later, Sam has a tender paw from their initial travels, putting him on sick call until the episode's epilogue. 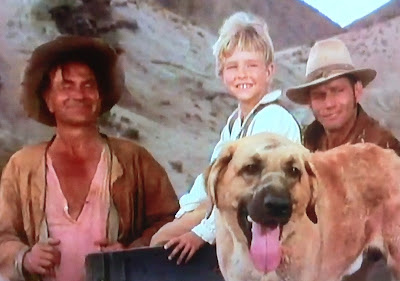 Light on the fisticuffs and a tad heavier on exposition than usual.  Hondo and the Singing Wire is a curious assignment for action specialist Witney, and Delgado's strategic lapse at the end fails to hold water.  Plenty of plusses though: another top notch supporting cast, handsome production values, and the sound foundation provided by Taeger's understated yet consistently effective presence.  Either a weak three star or a strong two and a half--I went back and forth on it and your mileage may vary.  Witney would later helm the outstanding Hondo and the Death Drive.  (*** out of four) 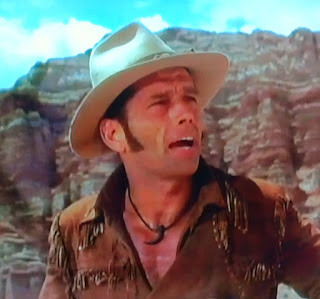 HONDO: THE COMPLETE SERIES is currently streaming at Warner Archive Instant and also airs every Saturday at 3:30 PM Central on GetTV.
Posted by Hal at 5:20 AM