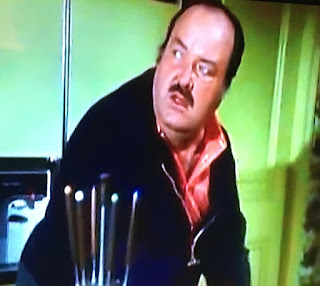 
I've written about CBS' 1971-76 series CANNON before, but never given any of the episodes the QUINCY, M.E. treatment.  And I still haven't, because this isn't a play by play breakdown of Photo Finish, just a normal review.  What can I say, I'm on a pitch count after this hiatus.

CANNON is a Horn Section favorite for a number of reasons.  First, it was one of the few long-running series of the 1970's to feature only one regular cast member.  Second, it's a refreshing throwback in terms of network interference.  With a distinct lack of pandering to audience demographics, the balding, hefty, Fiftyish William Conrad was trusted to keep us interested with no perceived need to bring in a young stud to attract the ladies (i.e. Mark Shera in BARNABY JONES or Joe Penny in Conrad's later JAKE AND THE FATMAN) or eye candy for the men (Lee Meriwether in JONES).  Don't get me wrong: I liked BARNABY too, but I'm a purist, and Frank CANNON stayed a loner for all five seasons that he was on the air. 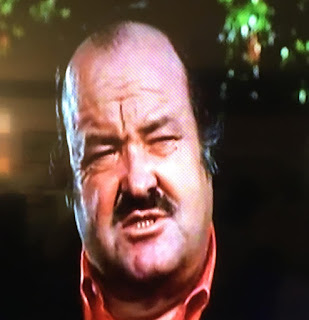 Finally, CANNON had more good scripts than bad scripts, emphasized brains over brawn the majority of the time and didn't overstay its welcome.  You won't get hit over the head with any social issues here, since CANNON was always about the case itself.  Frank Cannon won't preach, but he will stop for a gourmet meal from time to time (like, about three or four times per episode).  He knows judo too, but that doesn't come into play in Photo Finish, the show's first offering for 1974. 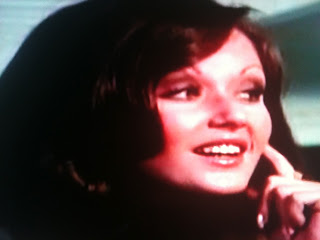 Retired cop turned expensive P.I. Frank Cannon arrives at the firing range to speak with a new prospective client, Mr. O'Hara.  General O'Hara, he's corrected, by Anne Thorpe, a journalist and also clearly an admirer.  Played by COLUMBO villain extraordinaire Jack Cassidy, O'Hara turns out to be the C.O.C. of Polumba, an African nation.  You guessed it: the esteemed General has diplomatic immunity in the United States.  O'Hara establishes himself as a card carrying badass with a perfect showing at the range, though we only see him firing the final shot.  Modestly shrugging off his work as "par for the course at the world class level", the General is ready to get down to business. 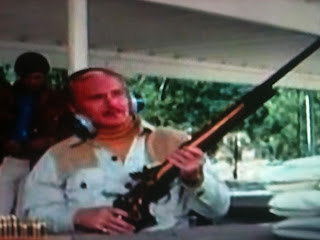 The general's brother was killed in California several years earlier--April 15, 1970 to be exact, and O'Hara wants to hire Cannon to identify the murderer.  It's a tricky assignment--the General's sibling was using an alias at the time.  Also, cryptically stating his distrust of the police, O'Hara insists that Cannon not notify them once he locates the killer: "report to me only".  Cannon refuses, specifically objecting to the latter demand. But O'Hara is persistent about hiring the best in the business, offering a substantial increase in Cannon's already high fee and eventually acquiescing to the P.I.'s insistence on taking any murderer he finds directly to the L.A.P.D. 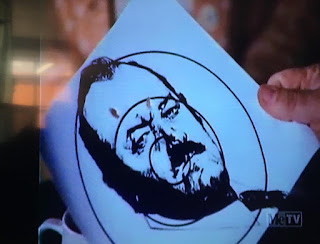 A dogged investigation ensues, with Frank Cannon poring over every homicide victim from the given date meeting the physical description and calling in a few favors with current Lieutenant Strauss.   But someone apparently doesn't want this information uncovered: gunshots are fired Cannon's way in his high rise apartment(!) and, after Cannon's mobile phone is disabled, at a phone booth.  The detective is unnerved, but carries on, checking in with O'Hara every other day.  The entire second act is spent on one seemingly solid lead, only to come up dry and take us back to square one at the halfway mark of Photo Finish. 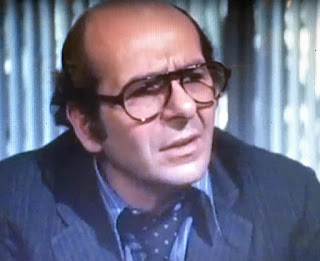 With the assistance of newspaperman Oscar, Cannon finally uncovers the killer who was never brought to justice and more information about his employer's background.  Details involving O'Hara's rapid rise through the ranks cause just as much unease as that persistent stalking, and let's face it: the casting of Jack Cassidy pretty much told you what kind of guy this alleged six star General really is. 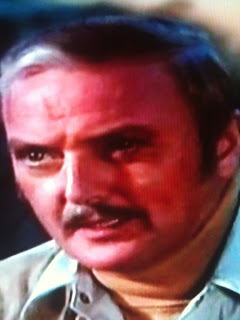 Photo Finish is the only CANNON episode scripted by John Hawkins (BONANZA), and he does a commendable job for about two and a half acts.  Hawkins provides a compelling premise while avoiding two of the show's clichés: as noted earlier, there's a distinct lack of judo.  Cannon also manages to avoid a concussion for once.  Granted, the fictional foreign leader with diplomatic immunity became pretty hackneyed by the end of the decade, but CANNON beat both COLUMBO and QUINCY, M.E. (to name two) to this particular plot convenience. 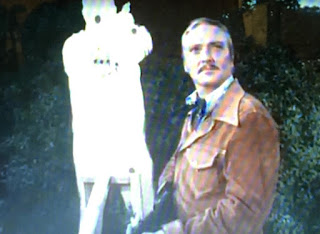 Any Seventies TV fan will be delighted to see the ubiquitous antagonist Jack Cassidy on hand.   General O'Hara might well be the vilest character Cassidy ever played, which is saying a lot.  We learn that O'Hara napalmed and machine gunned villagers who were hopelessly outmanned, directing the slaughters by helicopter (remember, that first sniper reached Cannon's apartment several stories up) and that all of his superior officers were consistently "unlucky" off the battlefield. 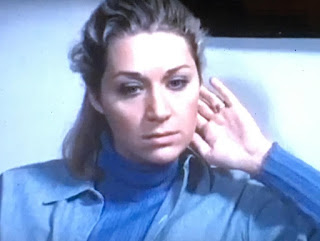 Oscar proves worth his salt, finally uncovering the culprit who slew the General's sibling: then-Detective Frank Cannon, off duty on that April 1970 night but able to stop a madman in the midst of a killing spree.  With the revelation that he's been hired to find himself, Cannon confronts the General about the sniper.  Naturally, O'Hara has left nothing to chance, and none of the bullets fired at Cannon match his custom-made rifles.  He's a good sport following the accusations, smiling as he promises to pay Cannon for his work.  Yup, an eye for an eye: no member of the bloodthirsty mercenary's family can be slain without vengeance, regardless of circumstances. 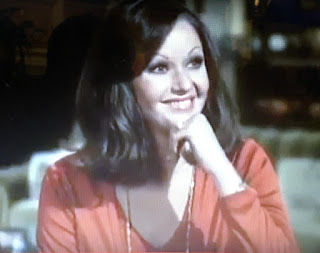 "Running is NOT the answer."

Given the long line of bodies O'Hara has left behind in Polumba---how do scriptwriters come up with these country names, anyway?---the General is the most imposing adversary our portly gumshoe has faced to date.  Would-be biographer Thorpe offers chilling proof of O'Hara's obsession and Lt. Strauss offers round-the-clock protection, but Frank eschews the latter.  Hawkins nicely reminds us why we enjoyed visiting Cannon every week, providing a final act that displays the rotund investigator's courage, resourcefulness and determination.

"Fight fire WITH fire when you're dealing with a madman."

Cannon seizes the advantage with the help of some large-as-life duplicates and a deliberately planted phone call to put the General in a rare situation in which he doesn't have the advantage for once--at the combat range, to boot.  Series ace George McCowan (23 episodes) films it as well as possible, but unfortunately, while the denouement is clever on paper, it's almost Jabootu-worthy in execution, as the world's greatest marksman suddenly can't hit a Cannon-sized target with his high powered rifle after hitting several cardboard Cannons dead center with every previous shot. 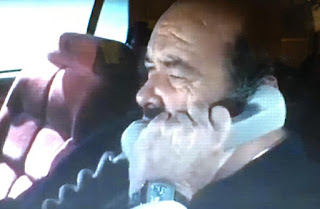 Meanwhile, Frank's .38 snub nose revolver is dead solid perfect from what has to be a hundred yards, easily.  Should have worn some Kevlar, General!  I've seen Frank Cannon make cars and airplanes explode with that thing. 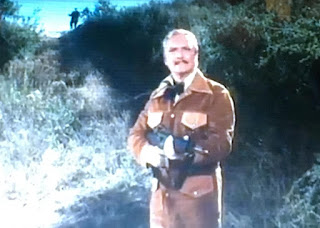 Despite having more than a few nagging questions and/or flaws, Photo Finish is a prime example of why I consider Season 3 to be CANNON at its peak.   Sometimes unintentionally funny, but executed with enough verve to remain highly entertaining.  Check out the chance to see a couple of future TV stars early: Hal Williams (227) is O'Hara's trusted aide, and Gerald McRaney (SIMON & SIMON, MAJOR DAD) is on hand for a line or two.  A mostly solid and enjoyable entry from a season that also met both criteria. (***1/2 out of four) 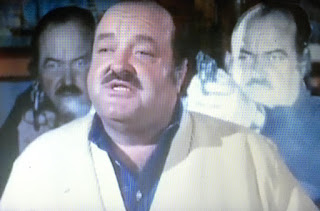 Actually I do have better thigs to do, I just don't want to do them.