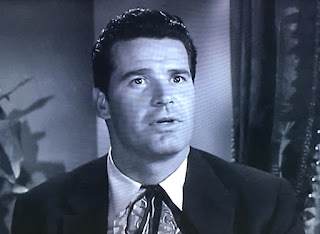 
During the long stage ride to Ten Strike, New Mexico from Tucson, Bret Maverick makes the acquaintance of dance hall girl French.  He does so with reluctance, but finds the effervescent young lady hard to shake.  With only one hotel in town, Maverick is gentlemanly in spite of himself: Bret ends up moving Frankie's considerable baggage and losing a much anticipated hot bath to the showgirl. 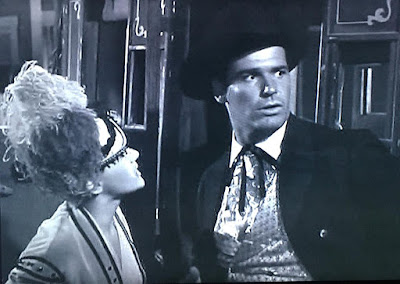 Maverick also finds himself unwelcome in Ten Strike: Nolan and Burke strongly advise him to be on the next stage the morning after his arrival.  Later, they drive the point home physically.  Frankie gets a far warmer greeting.  In fact, she's been summoned to the New Mexico town for her "everlasting benefit" by a mysterious benefactor.  She's flattered, but increasingly smitten with Maverick, who wonders just who wants him out of town.  And why.

Douglas Heyes' penultimate MAVERICK begins as light comedy, with the ever put-upon Bret finding himself constantly intertwined with French long beyond their shared stagecoach ride.  True to form, he makes her pay for the stolen bath but allows himself to be guilted into sharing his meal after it breaks her.  The contrast between perky Frankie and laconic (at least until he's had his coffee) Bret allows for plenty of quick bantering punctuated by Maverick's repeated denials of romantic interest. 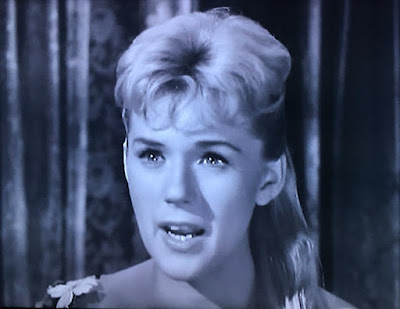 "My Pappy told me there's just about three reasons most men do anything: Greed, Curiosity and Anger."

Frankie is intrigued more by Bret's character than her secret admirer's (presumed) money, and Maverick's failure to heed the friendly warning has her thinking the feeling is mutual.  Nope: it's Pappy's first option that keeps his son past curfew: Bret outstays the stage at Ten Strike's poker tables.  The session is far from profitable, but Pappy knew his offspring well. 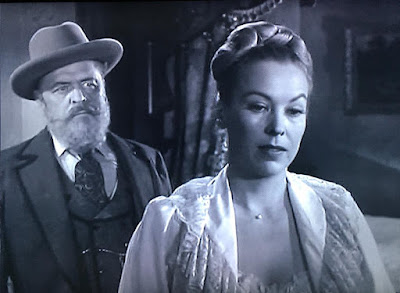 "Pappy said most men, but he was looking right at me when he said it".

A considerable amount of MAVERICK's appeal stems from watching that greed in action, but it was always overstated in comparison with Bret's curiosity, which gets him into more hopeless (but not serious) situations that he'd care to admit.  Upon arrival, Maverick doesn't expect a lengthy stay in the titular town, but sure enough, Pappy's second reason keeps Bret there for the rest of Two Tickets to Ten Strike. 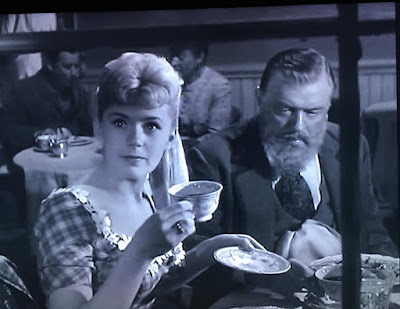 Pappy didn't mention "love" as one of his three reasons, and while Bret never appears to fall for Frankie, the daffy damsel certainly grows on him.  Maverick ends up kissing her three different times, and actually leaves a poker table when he hears she's been jailed!  For once, it appears that Bret's resistance to matrimony might well be futile!  In the end, though, Stevens and French were both one and done in the MAVERICK universe despite this auspicious debut.  You can probably thank her long-running HAWAIIAN EYE berth (which began just a few months later) for that--she's one of Bret's very best leading ladies. 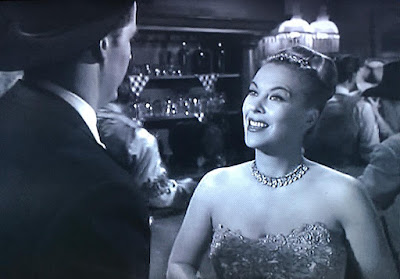 Stevens has formidable competition in the vavavoom department from the always photogenic Andrea King, beginning to make the rounds at Warner Brothers television after a healthy run in features.  King scored multiple appearances on 77 SUNSET STRIP and THE ALASKANS, but despite her memorable turn here as the proprietress with a past, this was her only MAVERICK.  Too bad--you can't take your eyes off her.

Two Tickets to Ten Strike is the first of three episodes for Adam West, who would return in Pappy and A Fellow's Brother during the third season.  And since it's a Douglas Heyes Joint, future screenwriter William D. Gordon is here, too, as West's partner in crime.  A poker dealer in both Escape to Tampico and (uncredited) Two Beggars on Horseback, Gordon would end up writing and producing for IRONSIDE and TWELVE O'CLOCK HIGH among others.  This was the last of his four segments; Gordon's most substantial MAVERICK role was that of a suspicious ranch hand turned would-be vigilante leader in Heyes' frightening Prey of the Cat. 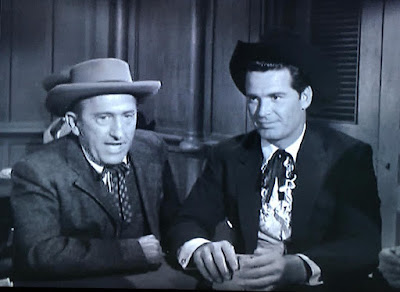 He lost $200 learning how the game is played in Ten Strike, and was preoccupied the rest of the time.  Even when he belatedly made his way out of town, he got dragged away from his next game when a stranger piqued his curiosity.  Speaking of that....

The first proverb from the Maverick patriarch is discussed above, but we get another dose later, and  the second Pappyism is my personal favorite of the entire series: "A coward dies a thousand deaths.  A brave man only once.  A thousand to one is a pretty good advantage."

Not quite on a par with Two Beggars on Horseback, but a solidly drawn addition to the eclectic mix Heyes contributed to MAVERICK's finest season.  Two Tickets to Ten Strike bookends a plot-heavy middle with as close as the show got to classic screwball comedy.  On the downside, the repartee between Garner and Stevens is missed when disappearing for the intrigue.  But there's much more to savor: Roscoe Ates' deadpan cameo, an atypically sympathetic role from LOVE THAT BOB "wolf" Lyle Talbot.  Best of all, two of Pappy's quintessential aphorisms are present and illustrated perfectly by the action that ensues.    (***1/2 out of four) 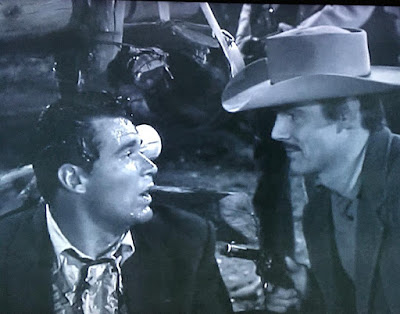 MAVERICK airs every Saturday morning on MeTV at 9 A.M. Central, and every weekday afternoon on Encore Westerns at 3:35 P.M. Central.

All three times on MAVERICK, anyway. He was really funny in the opening scene of A Fellow's Brother.

One of my favorite MAVERICK episodes from the Bret years. Of course, there are a dozen of those....