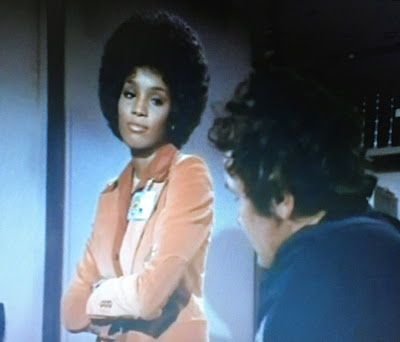 
Introduction to the GET CHRISTIE LOVE! episode guide and review of the TV movie pilot at this link.


An Indian Prince's diamond collection is valued at seven figures plus and goes to auction in Losa Angeles.  Attempting to keep the gems secure for it, Christie goes undercover on the runway as one of eight high fashion models displaying the priceless antiques for potential bidders.  It's all for naught: immediately after the showcase, a masked robber succeeds in snatching the collection while the lovely ladies are removing the jewels.  He has to be a professional, knowing exactly where to strike and who to disarm, taking hostages while making his getaway.  Detective Love gives high speed chase to no avail. 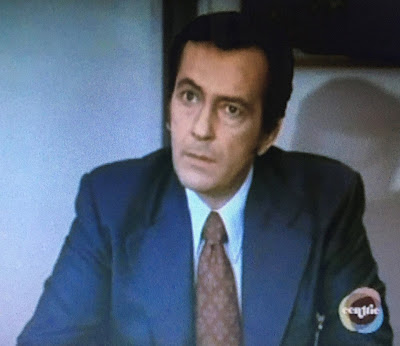 Captain Ryan recognizes the M.O. as that of slippery pro Marty Hazard.  After returning the merchandise through a broker (minus a commission and a "finder's fee"), Hazard consistently avoids capture while making a solid profit.  After all, there's never enough evidence and the resolution always leaves everyone satisfied.  Everyone except Detective Love, who still sees a crime going unpunished.  Ryan gives Christie the diamond-hot assignment and she sets out to find loose ends before they're tied up yet again.  Suspicion soon falls on inside help, which leads a reluctant Christie toward her old school friend Sari, another of the aforementioned models who seems to be living really well. 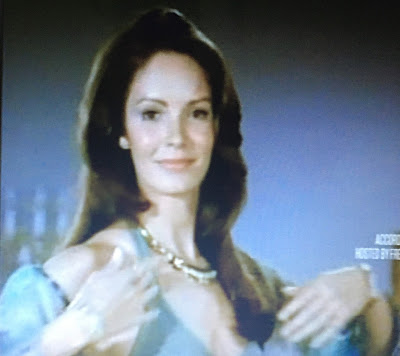 The Glen Larson/Ronald Satlof episodes of GET CHRISTIE LOVE! are filled with casting hooks, ranging from Bobby Riggs and Rosemary Casals playing themselves in The Big Rematch to the LAUGH-IN reunion in Murder on High C.  To the modern eye, a pre-CHARLIE'S ANGELS Jaclyn Smith is the biggest name in A High Fashion Heist.  But while Smith has the largest supporting role, she wasn't the star attraction at the time: Miss World and Miss America were sharing the runway.


Miss World 1973 Marjorie Wallace had the second (and penultimate) acting role of her brief career, with the same role she had in BARETTA a month earlier: the crook's girlfriend.  Wallace was the first Miss World crowned from the U.S., and one of the most controversial: romantically linked with George Best, Tom Jones and (then-recently deceased) Peter Revson, Wallace was stripped of her title after only 104 days, becoming the first of the pageant's winners to lose her title.  She's improved from her first role here, but would remain better known for her offstage notoriety.  1975 brought her first and last TV roles.


1973 Miss America Terry Meeuwsen ended up having far more staying power in front of the camera than anyone else in the cast.  She's been co-hosting THE 700 CLUB since 1993.   However, this was the lone acting appearance of her career, and she has a mere two lines--clearly her niche was hosting religious programming.  (Incidentally Wallace also hosted a long-running syndicated staple, albeit briefly: she was the original 1981 co-host of ENTERTAINMENT TONIGHT, pre-Mary Hart.) 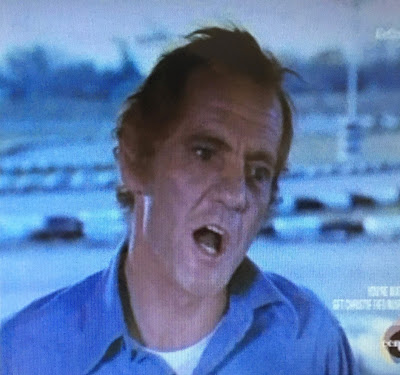 Back at the station, Pataki's Gallagher continues to be used as comic relief, and again commits a major boo-boo when he accepts a meal from elegant suspect Crocker.  This time he has a tad of redemption when his basement research (itself a punishment from the Captain) finally connects Christie with her perpetrator.  The exasperation that Gallagher continually gives Jack Kelly's Captain Ryan provides a spark of life largely missing from the earlier Charles Cioffi/Andy Romano episodes, though you still wonder almost every segment how the Hell Gallagher keeps his job.  Dennis Rucker's Belmont survived the midseason changes, and Scott Peters wrapped up his acting career with the recurring role of Detective Valencia. 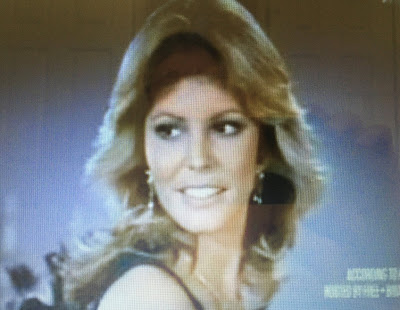 I couldn't find any information on co-writer B. Gerald Bell, but Michael A. Hoey wrote only a handful of teleplays.  Most of his TV credits were behind the camera (FALCON CREST), but Hoey was best known for THE NAVY VS. THE NIGHT MONSTERS.  The duo provides veteran director Friedkin with a decent script, and Friedkin gets around content restrictions by having a fairly spectacular (by prime time standards anyway) novelty death at an electrical plant.  The scene is marred by what would seem to be a severe overreaction on the part of the accomplice, but the flaw isn't too distracting all in all. 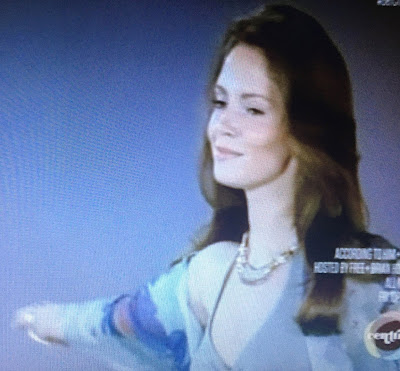 A High Fashion Heist goes down easy, with Jaclyn Smith's early appearance holding the most interest for audiences today.  One can see why she'd be a major TV star just a year later.  It's fun to wonder if Graves might have gotten a call from Aaron Spelling if she'd stayed in show biz--he practically needed a new ANGEL every other season--but since the GET CHRISTIE LOVE! star was only two episodes away from ending her own television career, A High Fashion Heist is as close as we got to that scenario. 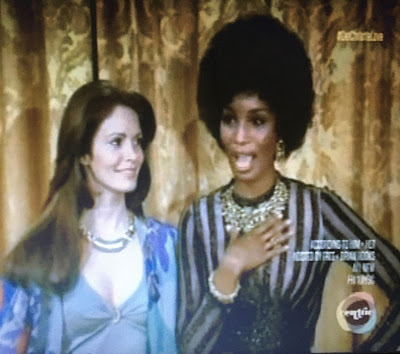 Just one "Sugar" for the mastermind himself. 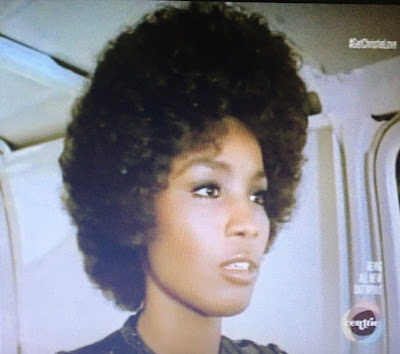 Graves, Smith, Meeuwsen and Wallace.  Casting gimmicks take the vavavoom factor off the charts, and the episode itself is solidly directed and decently written.  A High Fashion Heist focuses on the heist more than the fashion, but remains entertaining while doing either.  (*** out of four)

I think you're giving Don Galloway the short shrift here. "Ironside" was still on the air at the time, IIRC, or had recently ended, and reruns were plentiful at the time. I should know. I watched the reruns after school.

Thanks for reading and commenting Hobbyfan;

I agree with you, I probably should have given Galloway a little ink. He too was credible and probably liked getting to play a villain for a change. Yes, he was winding up his IRONSIDE gig at the time.

Looking at it, he didn't do that many guest spots during his IRONSIDE run, but was really busy with them afterward. I'll give him some ink when I get around to his CRAZY LIKE A FOX episode.

I guess I was too busy talking about the ladies in this one.

Galloway finished the 70's doing commercials (i.e. MasterCard) and tried a game show (The Guinness Game). Aside from the Ironside reunion movie, I don't know anything else he did aside from the "Fox" guest shot.

This is to tell you all about a versatile gentleman named Michael A. Hoey, who in my view really gets short shrift in this post.
Mr. Hoey wrote four books toward the end of his days (in order):
- Inside Fame On Television (He served as an editor, producer, writer, and ultimately a director for most of that series's run.)
- Elvis, Sherlock, And Me (An autobiography of a lifetime in showbiz, covering all bases.)
- Sherlock Holmes & The Fabulous Faces: The Universal Pictures Repertory Company (Hoey's tribute to the Basil Rathbone/Nigel Bruce Holmes movies - and to his father, Dennis Hoey, who played Inspector Lestrade in many of them - as well as the many other character actors who were in them.)
- Elvis' Favorite Director: The Amazing 52-Year Career of Norman Taurog (A biography/tribute to Hoey's mentor in the movie business … as well as lifelong friend; just reading the names in the index will make your head spin.)
Michael Hoey finished this last book just before he passed on, in 2013; odds are that were he still around, he'd have added a few more …
Anyway, these four books should be available, from Amazon and elsewhere, with more lore than you can shake a stick at.
By all means, try and get them - and enjoy!

Hi, Mike, and thanks!

Hey, there were too many interesting people in this episode to cover in detail. Not that that's a bad thing. Thanks for the lead on Mr. Hoey's books. Hey, Woodrow Parfrey and Hanna Landy (as Hertelendy) were in the cast and I didn't get to mention them at all. Maybe this one needed to be a two parter.