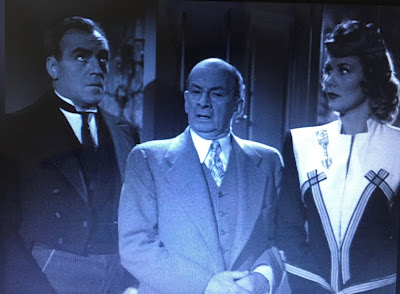 Introduction to the LEON ERROL SALUTE SERIES is at this link.


A national emergency resulting in rationing of raw materials and "non-essential" employees and businesses being told to stand down.  Ripped from today's headlines?  No, a 1945 comedy showing that history does indeed rhyme---an amusing artifact from the tail end of our last "Fourth Turning".

Lingerie tycoon Errol makes the argument that his product is indeed crucial for national morale--soldiers in The Big One need those pin-ups!  Unfortunately he doesn't succeed with it when he petitions the ration board for additional gasoline coupons.  Once Leon learns that carpooling will net him extra vouchers, he risks the misrepresentation penalty (10 years or $10 grand) by hiring people to ride with him, even offering to board them at the mansion while the Mrs. (Bilbrook) is away for two weeks.  Young promoter (and boyfriend to Leon's secretary Riley) St. Angel is quickly hired to start the ball rolling. 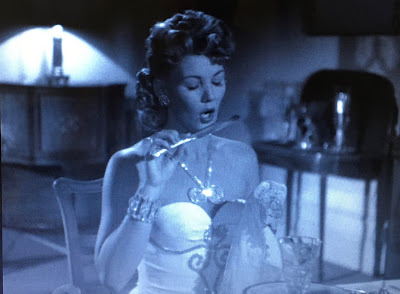 Shifty butler Lane secures the services of laid off dancer Borg to round out a trio of riders, but Errol unwittingly finds himself hosting Borg's entire entourage of racy showgirls.  Simultaneously, bluenose textile manufacturer Kolb (who Leon badly needs materials from) decides to drop in on Errol, forcing unrefined and reluctant Borg to play Leon's "much younger" spouse.  Naturally, Bilbrook returns much earlier than anticipated, giving him too many wives and nowhere near enough bedrooms when the pious Kolbs are forced to stay the night. 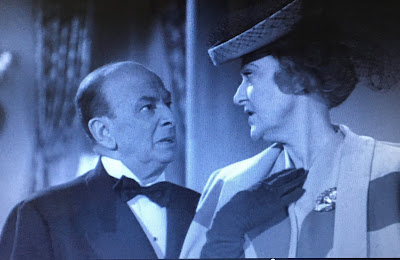 A longtime scribe of Errol pictures, Charles E. Roberts (RIVERBOAT RHYTHM) adapted WHAT A BLONDE from a story by lawyer turned screenwriter Oscar Brodney (HARVEY).  In what is likely Roberts' finest screenplay, WHAT A BLONDE is wonderfully complex with minimal contrivance.  Roberts weaves an increasingly tangled web for Leon, packing enough gags for half a dozen short subjects into its 70 minutes. 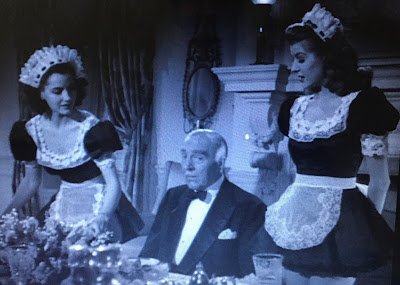 Outside of a brief reference to a fling ten years past (that Lane has been milking for that same decade of employ), Leon steers clear of philandering and inebriation for once.  Butler Lane is the implied womanizer (Borg is one of his girl friends) and provides apparent support for Errol's schemes that unfortunately adds a new problem for every one solved, whether he's providing extra riders, siphoning needed gas, or using his charm to provide temporary (but too scantily dressed for the sanctimonious guests) domestic help.  Lane made a living playing sharpies, and meshes perfectly with Errol--no wonder that Lane soon ended up with his own two-reel series at Columbia (with Gus Schilling).  It's a close race who gets more laughs during the first half of WHAT A BLONDE. 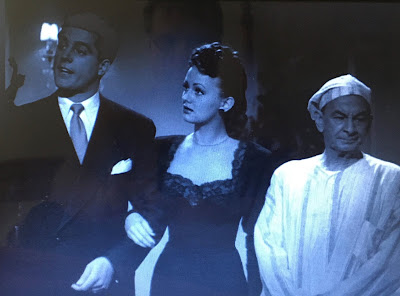 However, Leon pulls way ahead in the home stretch, with one perfectly timed denial after another as he alternatively kowtows to the devout but critical Kolb, attempts to placate his increasingly angry Mrs., creates a plumbing disaster and repeatedly finds himself in the wrong room.  The beginning of Leon's terrible, horrible, no good very bad day at home was no better: he inadvertently ruined Lane's arrangement to get around meat rationing and caused his entire domestic staff to resign at the worst possible time. 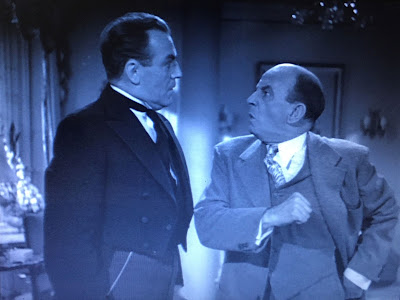 While other outside-the-box Errol films ranged from decent (POP ALWAYS PAYS) to way below average (HURRY, CHARLIE, HURRY!) and generally relied on Leon to do all of the heavy lifting, WHAT A BLONDE gives the comedian probably his finest material of the 1940's.  With nary a wobble in his walk, the veteran responds with flying colors and gets fantastic support from Lane, Borg, and the always stentorian Kolb.  Bilbrook also played Leon's wife in five MEXICAN SPITFIRE movies (as Lady Epping) and Deer! Deer! 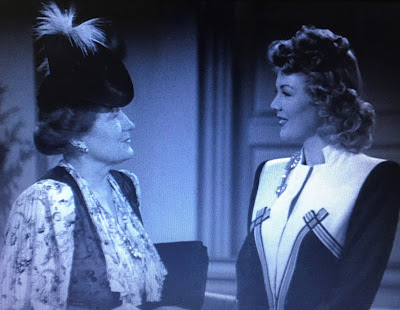 WHAT A BLONDE was the first credited feature for Elaine Riley (He Forgot to Remember).  Real life TV chef Joseph Milani usually went uncredited, but gets prominent billing as the butcher who turns out to be Leon's first (but not last) nemesis.  Jason Robards Sr., Dorothy Vaughan, Lloyd Corrigan and Emory Parnell are among those noticeable but missing from the credits. Directed by Leslie Goodwins (F TROOP, MAVERICK), WHAT A BLONDE gains steady steam right up to its satisfying climax.  It's a wonderful discovery for fans of classic screwball comedy and an absolute must for anyone who doubts that Leon Errol belongs among the greats of the first half of the 20th century.  Highly recommended, and now available on DVD from Warner Archive. 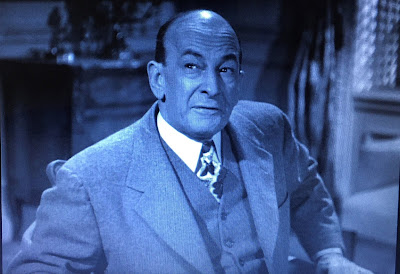 Do you remember when Errol's shorts for RKO were in syndication back in the 70's?

hobbyfan: Yes! Usually we would get either Leon Errol or Edgar Kennedy every day on Ch 11 (KTVT), our DFW independent that later became a superstation in the 1980's. There was a movie every weekday from 1 to 3 PM and typically one of these RKO shorts would fill in the last 20 or so minutes of the time slot before cartoons started. Loved them both but liked Leon a little better even then. Was so great to have these on TV. I wish TCM would use them in the same way now.

Agreed. Living in upstate NY as I do, Leon Errol and Edgar Kennedy shorts would rotate with Tom Kennedy (not the game show icon) around 2 pm or so on WSBK out of Boston. No one in upstate NY had the rights.

I wish Eroll had made a dozen features (or more) like this. It's really a great little movie, a farce almost on the Fawlty Towers level.

Thanks for reading, Max! I agree. This is one of the few times Leon Errol was given material worthy of his talents in a feature film.