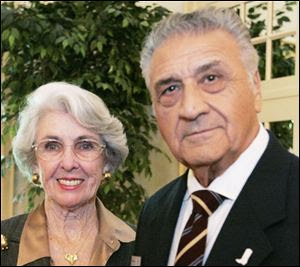 Sad news to report: longtime producer/writer and raconteur extraordinaire Andrew J. Fenady passed away last weekend at the age of 91.

The University of Toledo graduate got his start in television with multiple installments of the Paul Coates documentary series Confidential File.  Interviewed by Bob Anderson years later, Fenady recalled this as his "real training ground".  It was while working on that series that Fenady met young director Irvin Kershner.  They soon moved into feature films, with Fenady writing and producing and Kershner directing.from that to writing and producing the feature films STAKEOUT ON DOPE STREET (1958) and THE YOUNG CAPTIVES (1959). 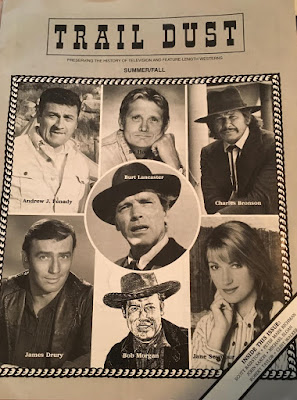 At that point Fenady moved into television, where he would spend much of the next decade producing a trilogy of classic westerns dealing with the aftermath of the Civil War: THE REBEL (1959-61), BRANDED (1965-66) and the series that most endears him to us here at The Horn Section, HONDO (1967).

Conceived by Fenady as "Jack London in the West", THE REBEL made a television star of Nick Adams and was popular enough to spawn a pilot for a proposed Fenady-created spinoff, THE YANK, which would have starred a young James Drury in the title role.  Both were initially slated for the Fall 1961 season after two well-rated seasons for THE REBEL, then both were abruptly dropped by the perennially third-place ABC.


Fenady's next success starred RIFLEMAN Chuck Connors in BRANDED, an ex-Union officer accused of cowardice and seeking to clear his name.  Like THE REBEL, BRANDED was successful in the ratings, initially slated for a third season, then off the schedule in a late decision.  It was the highest rated cancellation of the 1965-66 season (32nd place).  The series also had a second life in syndication that continues to this day; it is currently airing on INSP.


HONDO completed the trio and for the next two decades appeared to be the lone flop of the producer's television run.  After running less than four months (opposite GOMER PYLE and STAR TREK in a killer time slot) and largely remaining forgotten for the next two decades, HONDO began airing on TNT in June 1989 as part of the package of MGM catalog Ted Turner had acquired the rights to.  I've written about it before, but HONDO finally became a hit, running for ten consecutive years on the network on Saturday mornings despite having only 17 installments to run.  Even the Wall Street Journal took notice of the show's belated popularity, calling it "one of cable's most successful resurrections" in the August 9, 1991 issue.


HONDO is repeating that success story on getTV.  After premiering on September 19, 2015 alongside James Garner's NICHOLS and Robert Horton's A MAN CALLED SHENANDOAH, HONDO is still airing every Sunday morning nearly five years later, outlasting those two shows (which had considerably more star power) on the schedule.  A half-century later, HONDO might well be the best-known and most watched program of Fenady's TV trilogy.

CHISUM, TERROR IN THE WAX MUSEUM, HE MAN WITH BOGART'S FACE and the Charles Bronson remake of THE SEA WOLF were among Fenady's film projects over the quarter century that followed.  He contributed mightily to Trail Dust magazine throughout the 1990's, a quarterly dedicated to "preserving the history of television and feature-length Westerns".  Fenady won a much deserved Golden Boot Award in 1995.

Interspersed throughout this post are excerpts from Fenady's 2015 interview with Rob Word, with many fascinating details about the producer's TV work, working with John Wayne and Robert Taylor, and much more.  (Incidentally, Andrew J. Fenady's brother Georg was a highly successful TV director in his own right, and he directed this much-loved QUINCY, M.E. episode from the show's hilarious years.)

R.I.P. to one of television's greats.  Stay tuned for the conclusion of the HONDO episode guide soon here at The Horn Section.

After a highly inconvenient week offline (I'll spare you the ugly details), I finally had my 'Net restored yesterday (Thursday the 23rd) - and one of the first things I learned was that Andrew J. Fenady had passed on.
Some things you just don't wanna hear, whatever the circumstances …

One of Mr. Fenady's later TV projects was a special movie called Yes, Virginia, There Is A Santa Claus.
Yeah, really.
Richard Thomas played Mr. O'Hanlon, Virginia's dad.
Ed Asner was the editor of the New York Sun, which carried the editorial.
And as Francis Church, who wrote the famous words -
- Charles Bronson.
Fenady wrote the teleplay with Val DeCrowl, as well as producing the show.
I've got the DVD (out of print and hard to find, but worth it).
But wait - there's more.
Andrew Fenady was so taken by this story that years later, he decided to turn it into a stage play.
He took the play to his old home town, where the Toledo Repertoire Theatre staged it in 1997.
Not only that - Andrew Fenady appeared on stage, enacting the role of Edward P. Mitchell, the Sun's editor (Ed Asner's part in the movie).
The play is set up like Our Town, with Mitchell/Fenady acting as narrator, talking directly to the audience (and apologizing in advance for his cigar, which he smokes throughout), and explaining the stagecraft and such.
I wish to Heaven I'd seen this - or at least that someone in Toledo had thought to record it.
As it is, all I have is a copy of the play script (published by Dramatic Publishing Company in Woodstock, Illinois; this is likely out of print as well, but I was able to find a copy).

Andrew J. Fenady was one of the most fascinating people I've ever heard of.
Somebody ought to write a book about him.

Hi, Mike; glad to hear your back online.

I wish I could have seen that too, sounds great. I hated hearing about Mr. Fenady's passing; I admired his films (esp. CHISUM) in addition to his TV work. I also thought it was really cool that he cast Bronson in that role, which really allowed him to do something different. The Sea Wolf too. Apparently Mrs. Fenady passed away just a few months before her husband.