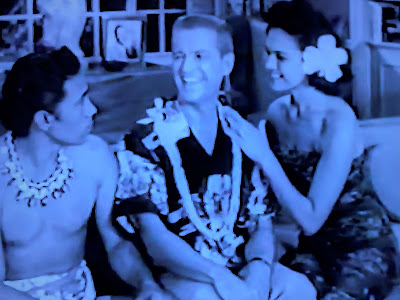 Introduction to the LOVE THAT BOB a.k.a. THE BOB CUMMINGS SHOW episode guide is at this link.

Bob is welcomed back to the household after a trip to Hawaii (still not a state yet, that's four years into the future).  Ostensibly Bob's excursion was a business trip, but actually he was keeping an eye on his latest target, actress Kay Michaels.  Who incidentally never left the mainland: a misunderstanding, go figure.  Not that Bob didn't work--every angle.  Learning that "a make kaua" usually resulted in plenty of action with the lovely native ladies, Bob ends up necking with stunning Dell-Finn when he tries the phrase.  Ten times, she recounts to her overjoyed mother. 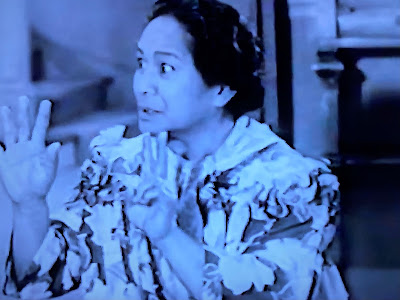 It made for a nice vacation for our playboy, but what non-native Bob doesn't realize the phrase ("until we die") is actually a marriage proposal in the islands.  Soon our loverboy finds Poaha has followed him to the mainland with her mother and brother in tow--expecting our shutterbug to follow through on the promise. 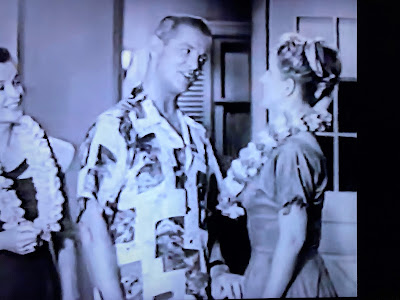 After concluding the initial three episode arc introducing Lola Albright as Kay Michaels (Bob's primary romantic interest during the sophomore season), LOVE THAT BOB launched right into another trilogy about the Hawaii jaunt and its aftermath.  Hawaii Comes Calling is the middle installment in which the chick follows Bob home to roost.  At first Collins seems more than happy to reminisce about the trip, so much so that he doesn't even mind that busybody Niemeyer was spying on him out west! 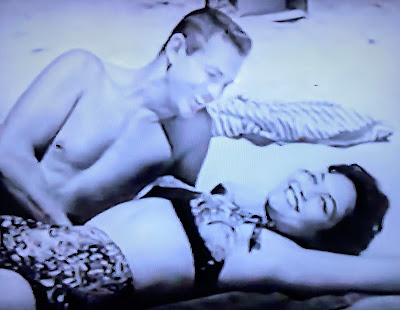 Understandable, as Uncle Bob is a bigger hero to Chuck than ever once the youngster sees the steamy (for 1955) home movies from the islands.  If Chuck thinks his Uncle is The King at that point, his awe reaches a whole new level when the island beauty shows up on his doorstep.  Hickman gets some of his best laughs of the season with his subtle, yet thoroughly star-struck reaction--hey, he did just see quite a bit of her on the screen! 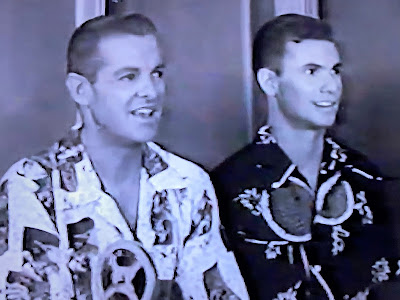 No series got you acquainted with more of the era's pageant beauties than LOVE THAT BOB, and the appearance of Dell-Fin Poaha is one more feather in the show's cap.  1950's Miss Hawaii, Poaha was starting a showbiz career like so many other contest winners.  A multi-instrumentalist who released CD's into the 21st century, Poaha played ukelele, drums, piano and sang with the Dell-Fin Trio for over forty years of mainland appearances.  Music was her sole focus after the 1950's, but by decade's end she performed on THE LIBERACE SHOW, acted on HAWAIIAN EYE (of course) and returned to LOVE THAT BOB for Hawaii Stays and Bob and Schultzy at Sea.  She's appealing despite her limited acting experience; widowed from Olympian Walter Luchinger last year, Poaha is living in California today at age 91. 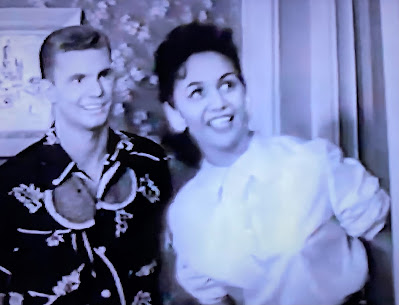 Bob’s attempt to weasel out of the nuptials isn’t fully resolved at the fade out, necessitating the aforementioned third installment the following week.  This is a fine lead-in to it with one quibble: it's A Make Kaua, not A Mali Kaua.  Henning, Gordon and Cowley were usually more meticulous.

Bob and Chuck watch the aforementioned home movies of the trip with looks on their faces suggesting they're watching something far naughtier on that projector.  We do see what they're viewing: Dell-Finn in a two piece bathing suit for most of the footage.  After several minutes of watching himself in action with Miss Hawaii, Bob excuses himself so he can take a cold shower. 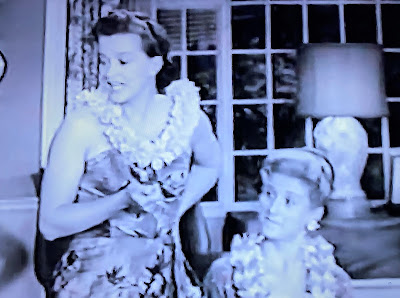 Mrs. Neimeyer was spying, but certainly wasn't stopping anything or even attempting to.  Bob had a clear path this episode and didn't even need that car Chuck was so eager to borrow.  But----

Definitely got on the bases in the islands, with the opportunity to cross home plate back in L.A., but since the traditional Dell-Finn required marriage to do that, our playboy passed.  Some lines just can't be crossed with ol' Bob.... 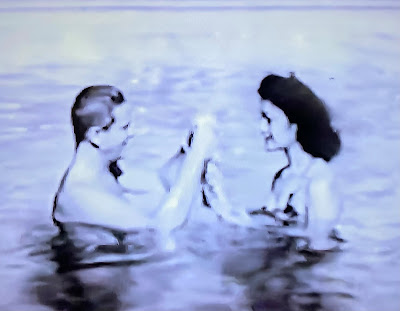 As was often the case with Henning's three parters, short on plot advancement in this middle installment, but it is never dull.  The humor involving Hattie's mother is corny to modern eyes, and mute brother George could stand to be more menacing to heighten Bob's anxiety.  Then again, perhaps the large knives are enough--Henning and Company seemed to think so.  Amateau's deft handling of an installment that barely leaves the Collins living room deserves mention--this never seems stagy despite the household confinement.  Here's hoping that prequel Hawaii Calls and sequel Hawaii Stays are made easier to see in the near future, but Hawaii Comes Calling works well as a standalone.  (*** out of four)

Expanding on that thought: if you'd like to check out Hawaii Comes Calling for yourself, good news, it's on YouTube!  See below: