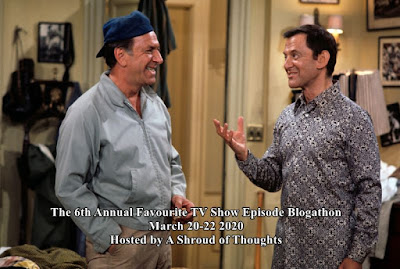 
This is The Horn Section's contribution to the Favourite Episode Blogathon hosted by A Shroud of Thoughts.  I've participated in this terrific annual event four times previously (from 2015 to 2018) and I'm glad to be back for this year's edition, the sixth.  Check out the rest of the posts from all of this year's participants, and subscribe: you'll always find some great classic television reading at A Shroud of Thoughts.

Marie Gomez is documented as one of my biggest celebrity crushes, and the fourth season of THE HIGH CHAPARRAL is often cited as the weakest by fans, so it might be surprising to discover that my Favourite Episode of this durable series doesn't feature the impish Perlita Flores and comes from that truncated (18 segments) 1970-71 season. 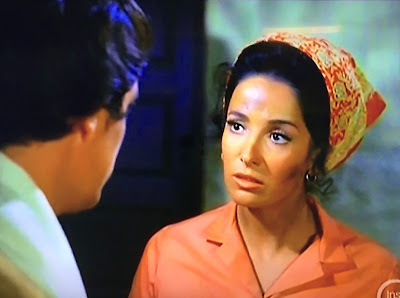 Billy Blue Cannon disappointingly vanished without an explanation and there are embarrassing duds like The Badge, but the final season also boasts some memorably strong dramatic installments.  Cameron Mitchell's always colorful Buck Cannon takes center stage for three of those, and It Takes a Smart Man is not only my favorite of the final batch, but of the show's entire run.

Taking a shortcut back to the home, Manolito is rebuffed when he attempts to aid a white man chased into the hills by Apaches.  Despite the chilly reception from the stranger, Mano fires from behind his boulder until he is out of bullets.  At that time Mano discovers the gunfire has ceased, and that the white man has vanished with it--having killed every single Apache who had been firing at him. 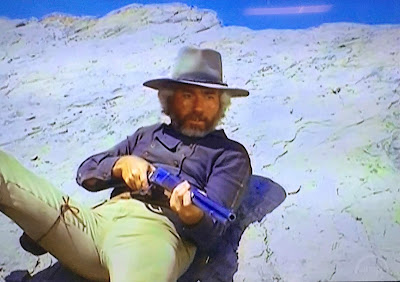 "That's one of your problems, Tulsa.  You judge every man by yourself."

Later, Mano sees the same man ride up to the Chaparral, arrogantly demanding to see John Cannon.  We learn he is Tulsa Red: killer of eighteen men before his 23rd birthday who escaped the hangman's noose in a Kansas City murder trial (with John's testimony as the key factor).  Tulsa is short on cash and his talent with a gun has made making a living difficult since.  Noting that he's come a long, hard way (and "wouldn't be here" if not for John), Tulsa demands $5000, an order the Cannon patriarch flatly rejects.  Cocksure that John will pay, Tulsa Red states he'll wait in Tucson for Mr. Cannon to come around. 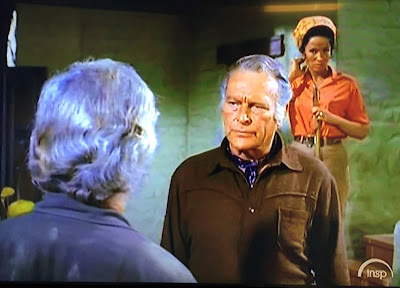 "Well, sooner or later, I'll have to go to Tucson.  Tulsa Red or no Tulsa Red."

Before he exits, Tulsa goads the unsuspecting Buck into conflict, and only the intervention of John and the ranch hands stops a gunfight.  Knowing he will be unable to keep the antagonists apart forever, John reluctantly and quietly gives Red the $5,000 under the pretense of a "loan" to save his brother's life against a much faster draw.  But that extortion can't be kept a secret from Buck for very long, and the younger Cannon seethes as having battles fought for him, no matter how imposing the opponent may be. 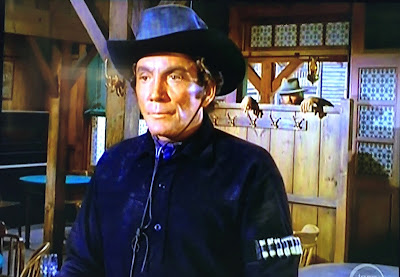 "Who's gonna say it wasn't a fair fight?  There's only you and me, and you'll be dead."

Spokes and Fiesta were almost solo flights for Buck, displaying the depth of that compassionate heart beating beneath the gruff exterior and essential decency that guides the younger Cannon.  In the former, Buck stands up to a tyrannical William Conrad (one year away from CANNON) on behalf of a friendless old trapper being wronged by cowardly townspeople under Conrad's thumb; in the latter, Buck protects an 11 year old boy who has been abused to the point of unresponsiveness.

Featuring the rest of the Chaparral clan far more equitably than those segments but staying focused on Buck, It Takes a Smart Man takes that sense of fairness and points it directly at his temple. 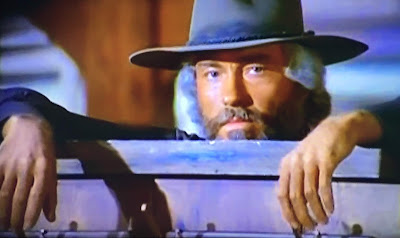 "John, I can't help it if I'm good with a gun.  That's a gift. That's like some people who can sing songs, some people can draw pictures."
"And you're just a natural born killer."

Buck Cannon is not such a man, and while his own prowess with a gun is considerable, he can't possibly win a draw against the fastest gun in the West.  Tulsa pushes Buck's buttons, but it's all business, nothing personal (at least initially).  Tulsa's hit upon the idea of getting paid not to use his peerless skill and uses Buck to get to John, putting the former's honor at stake.  Buck seems to be in a no-win situation: he can't possibly go high against Tulsa Red.  So justs how low will injustice-hating Buck be able to go? 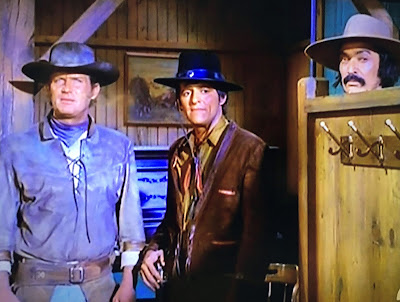 "If you was to admit that you had made a mistake, I just might forget the whole thing."
"I don't make mistakes!"

That legendary speed with a gun isn't the only reason for Tulsa Red's arrogance--Tulsa takes great pride in his ability to read people, and to "stay within the rules" so that each fight is technically fair, even if the skill level is always lopsided.  Knowing John Cannon's integrity from the testimony has him correctly surmising John will back down and pay the money to protect his brother.  He also correctly assumes that Buck is as noble as his older brother. 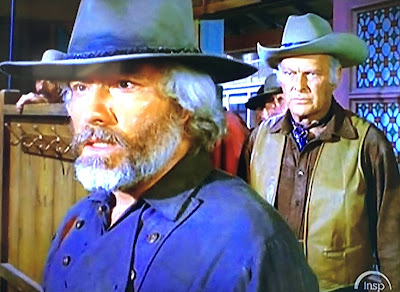 "I never figured you for a coward."
"Well, you live and you learn."

Extortion as a legitimate business can only work with a mark rich enough to pay you, so Tulsa heads for the Chaparral to begin his new "labors".  But while he's pegged John Cannon well enough to pull off the bluff, Red both under- and over-estimates Buck.  Both miscalculations contribute to his undoing.

"You're so willing to kill, you must be willing to die.  It's just the other side of the coin."

As noted, Tulsa Red has found a foolproof (he thinks) way to make money--his reputation does his work for him, and as long as he stays outside the parameters of murder, he'll avoid another close call like the one in K.C.  Tulsa Red's plan does not involve possibly dying for the cause.  Buck figures this out, and also knows that a successful blackmailer will go back to the well again.  Tulsa must be dealt with decisively. 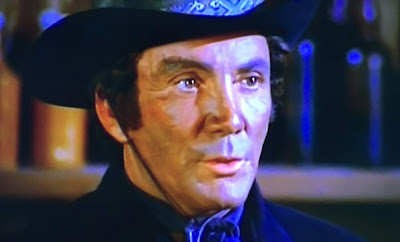 Buck Cannon inspires loyalty--Mano, Sam, Pedro and John all want to help him, but can't.  As Mano learns in the opening scene, Tulsa Red has no amigos by choice.  Making an arrangement with the one friend who can help him (Mike the bartender) gives Buck his out for a true one-on-one showdown.  To Tulsa's surprise, the feared gunslinger finds himself in a battle that isn't fair.  And yet, legally, it is.  Freewheeling Buck Cannon is as adept at bending the rules as Tulsa is. 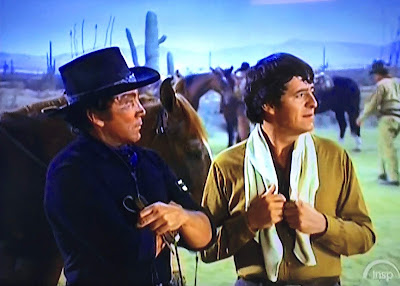 Buck Cannon has been irresponsible and often downright gullible (Stinky Flanagan) in prior years.  And for once, his tried and true aim can't help him.  But he has pretty fair acting ability of his own (calling Tulsa's bluff in the tensest moment) and reads the gunslinger well enough to find that crack in the armor and exploit it, beating a seemingly invincible opponent with his wits.  At the end of It Takes a Smart Man, we see that the younger Cannon isn't all that proud of what he's done, but ever the realist, he knows it was necessary.  And emotionally draining--not because of the fearsome opponent he just faced down, but due to the stress of going against his nature to do it.  Deep down, cheating bothers Buck more than death.  Arguably Mitchell's best delivery of the entire show is his final admission to brother John. 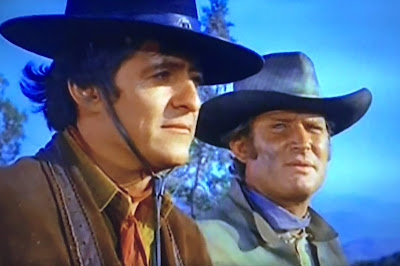 Does the audience lose any respect for Buck?  Quite the opposite.  It indeed takes a smart man to outwit this adversary, and to do it without loss of life is one Hell of a plan from one Hell of a man.

Writer Sowards and director Benson were vets of CHAPARRAL and producer David Dortort's biggest hit, BONANZA.  They collaborated on A Piece of Land and Friends and Partners previously, two explorations of the friendship between Buck and Mano and the strengths and weaknesses of their similar lifestyle choices.  Here, Buck gets center stage, and Mitchell successfully navigates this far less humorous terrain. 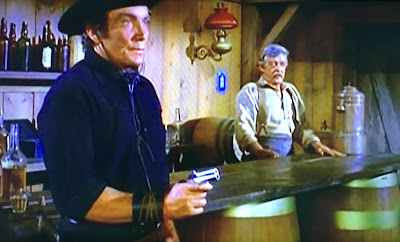 The controlled anger from Cameron Mitchell is matched by the equally impressive performance from Richard Bradford (THE LEGEND OF BILLIE JEAN) as Tulsa.  Bradford conveys the arrogance of an undefeated champion and the desperation of a broke drifter--both forced (early on when he's convincing John Cannon to fold) and real (when the realization hits Red that Buck won't throw in his cards so easily).  And yes, that's Lieutenant Monahan himself (Garry Walberg) behind the bar in Tucson.  There are many rewarding installments throughout the show's run, and It Takes a Smart Man shows that even after nearly one hundred segments, Buck Cannon and THE HIGH CHAPARRAL are both still capable of finding new wrinkles.

THE HIGH CHAPARRAL airs weekdays at 9 A.M. on Heroes and Icons.
Posted by Hal at 9:02 PM

Unfortunately, Heroes & Icons is no longer available in my area. Swapped out for some cheesy, saccharine content.

Since this was the last season of High Chaparral, I should note that Garry Walberg was a recurring guest on The Odd Couple at that time. Richard Bradford was a few years removed from Man In a Suitcase.

The understanding you display of these memorable characters is impressive. Your selection highlights that if you look for it, you can find greatness in seasons that others may dismiss.

I have to agree that the final season of The High Chaparral was its weakest, but it did produce some remarkable episodes and "It Takes a Smart Man" certainly numbers among them. Manolito and Buck were always my favourite characters, so naturally episodes centred on Buck will appeal to me. And this is one of the best Buck-centred episodes out there. I love that it presents Buck with a situation that he can't simply get out of with his physical prowess, and Cameron Mitchell gives one of his best performances in this episode. Thank you for taking part in the blogathon!