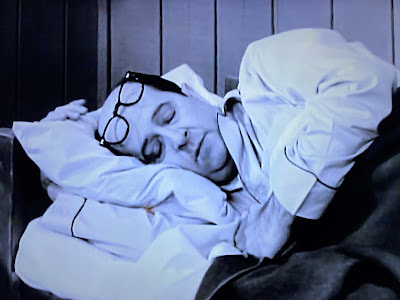 "There comes one day in each man's life when the Gods of chance ordain that he out of the millions in the world shall have his day.  The day when his every wish becomes a reality."

"Today, the gods have chosen a Master Sergeant in the United States Army.  His name: Ernie Bilko."

Yes, the day of his dreams has finally arrived for Sergeant Bilko.  Unfortunately, the Sarge is slow to realize today will be flawless since the day it follows was excruciatingly terrible--yesterday brought nothing but losers (0 for 26!) at the track and an accident in the Colonel's staff car on the way back that almost certainly resulted in a positive identification of our Sergeant.  Soon to be Private? 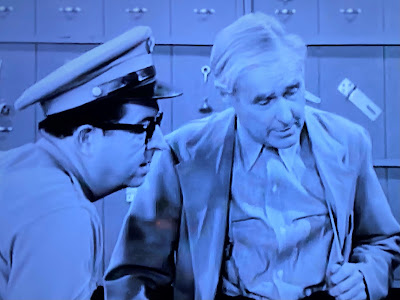 Fortunately, it's Bilko's Perfect Day, and the lucky breaks come fast and furious, getting him out of the latter.  Unfortunately, awareness is lacking--the Sarge recognizes this lone burst of good fortune but fails to pick up on clues hinting at a much bigger picture.  He's so shell-shocked from the day before he's convinced a fate worse than the guardhouse awaits after his narrow escape!  It's a race against time to see if they can have the revelation that will make Ernie shoot for a big score.  Is it really true that he'll Never Get Rich, or will he wake up in time? 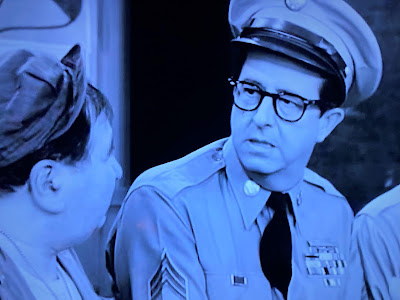 Bilko's Perfect Day is the bizarro Bilko: the titular period does result in one brief windfall ($200 in the one poker hand he gets into) for the shark, but the real benefactors are the usual marks around him.  Hapless Doberman gets $100 from a hardware store contest; Lieutenant Johnson graciously accepts Bilko's conveniently timed excuse that saves him from losing his bars; even eternal loser Ritzik finds a $500 pearl in the mess hall oysters.  The largest net gain by far is made by the humble hardware store proprietor MacGregor.  Temporarily $100 poorer from paying Doberman's prize, but gets repaid literally a hundred fold by being in the right place at the right time--the post office, meeting embezzler Fink seconds after Bilko gave the wanted man the brushoff! 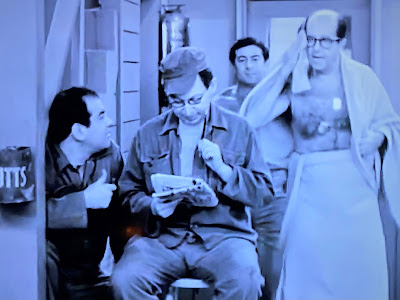 Johnson's well-timed pickup temporarily has the Sarge thinking his luck has turned, but a phone call from debtor bookie Patsy sends him right back into the belief he is cursed.  Bilko can't bring himself to let it ride on the horses, electing to stop digging after getting $100 in the hole. 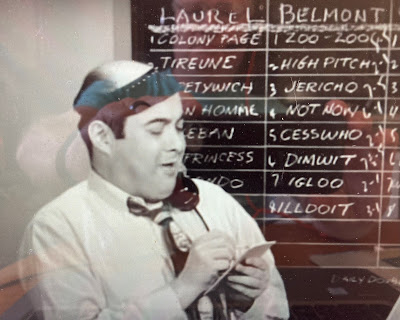 "It's a law of nature.  The smarter you are, the unluckier you are."

Of course, the Sergeant also realizes that his oft-impure motives might be a factor, talking to God for a reason.  Fortunately his thoughts don't turn too dark during his twenty four hours of wish fulfillment, though he does get the bookmaker struck by a car.  He teeters on desiring misfortune on Mrs. Ritzik, but mercifully stops short. 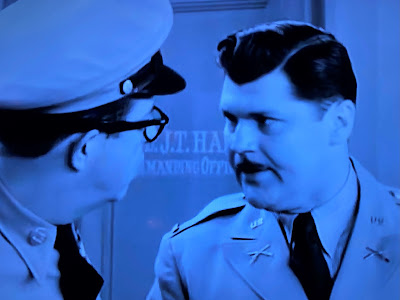 Naturally, almost everyone's windfall from the cardsharps disappears when Bilko finds one last racetrack still running with a highly improbable 160 to 1 shot left on the board in Melbourne, Australia.  With Ritzik and Patsy roped into the "sure thing", everyone but MacGregor is back at square one when the clock strikes midnight.  Well, OK, except for Doberman, who is ahead at least one liverwurst sandwich from the cardsharps (plus a PB and J from Bilko) who took his $100.  While Maurice Gosfield's Doberman was more popular during the BILKO years, future CAR 54 stalwart Joe E. Ross is the funnier slob to modern eyes.  Always best in measured doses (at least, off-screen for Hiken) Ross steals the occasional scene from Silvers and every scene with long suffering wife Beatrice Pons is a gem regardless of episode.  But as you'd expect, Silvers dominates the half hour with his impeccable timing. 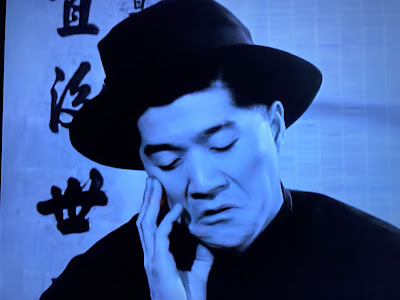 BILKO's second season was just a notch below its first, which is very impressive considering that 1955-56 season was a landmark in sitcom quality.  Nat Hiken was just three segments away from handing full writing responsibility to his staff, but he went out swinging with this oft-surrealistic entry that anticipated the looser atmosphere of later seasons, particularly the fourth.  No gimmicky guest stars, just a large, talented ensemble making excellent material sing.  The first two seasons were stuffed to the brim with (**** out of four) installments like this one. 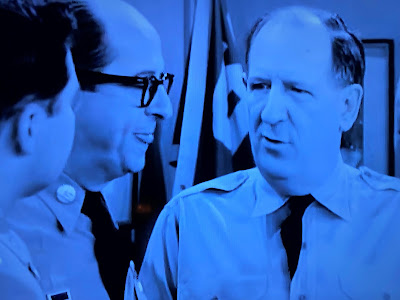 Ernest T. Bilko is a strong contender for the title of television's greatest poker player.  For sure, it comes down to him or one of the Maverick brothers.  (Sorry, Brady Hawkes.)  That said, the Sarge could take lessons from Bret and Bart on steam control.  He's still on tilt from yesterday's bad day on and off the track, and it repeatedly keeps him from seeing the charms right under his nose.  The true greats never get too high or too low--there's another hand being dealt in fifteen seconds, Sarge!  Yeah, this is a more anarchic show than MAVERICK, but still, don't let the vigor affect your play, Ernie.

In what can only be described as great news for all humanity, the entire run of THE PHIL SILVERS SHOW--all 143 episodes--is now available for viewing on YouTube.  Here's Bilko's Perfect Day:

If you're referring to Kenny Rogers' Gambler movies, the character's name is Brady Hawkes.

And, as we know, Edward Montagne brought Billy Sands & Bob Hastings with him when he went to Universal to produce "McHale's Navy". Allan Melvin made at least two appearances there.

Thanks, corrected! Hey it's one key away while typing. McHALE, like F TROOP, heavily influenced by this show. Beatrice Pons did indeed continue playing Ross' wife on Hiken's next series. Hiken had such a knack for putting the right performers together.