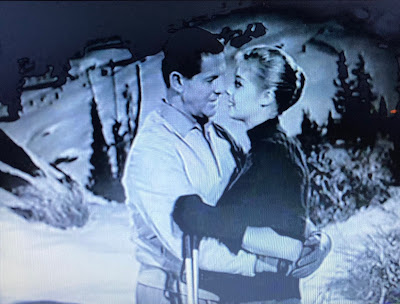 It's Christmas Eve and Chuck is dressed to the nines, reasoning that he's now old enough to show up at Uncle Bob's office party.  But an invite looks doubtful--our playboy has yet to extend one to his sister.  Yes, they'd cramp his style.  Bob wants to get Miss Sweden under the mistletoe, and Schultzy has covered the ceiling with it for her own obvious uses. 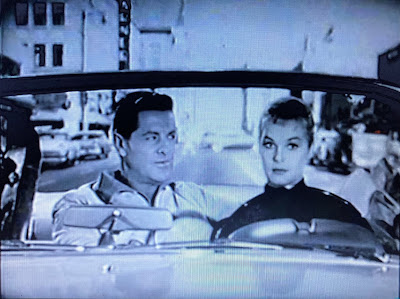 Bob Collins' social event doesn't sound too family friendly: that wolf Paul Fonda flies in from Paris(!) just to attend Le Grand Affaire Sauvage.  Yes, the Collins parties are notorious even across the pond and word of the decadence has also spread to Sweden: Ingrid declines an invite.  That forces Bob into a Plan B--outdoor location shooting in the cozy cold to soften her up before the 3:00 start.  Can Bob finally attain the unattainable?  In addition to Schultzy and Fonda he'll have a third obstacle to his goal: a randier Pamela Livingstone than usual, who seems eager to get either flyboy under the numerous plants. 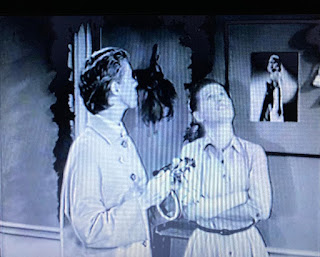 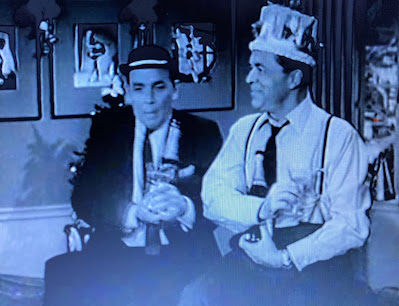 BOB: "You only knew one word of English."

BOB: "Unfortunately, that wasn't the word..."

With all that buildup the titular celebration would have to be a disappointment, so there's little surprise in revealing that we never see it.  At least, as intended.  Bob's quest will have him in the darkroom with Ingrid for the duration anyway, with her "big brother Bob" keeping her "safe from the libertines".  Meaning Paul, presumably.  Harvey Helm drops by to regretfully decline in person--Ruthie's decision, not his, of course.  He manages to serve Bob's purpose by getting pointy-eared competition Fonda drinking and reminiscing, with toasts hilariously going back to World War One by the time the bottles are empty. 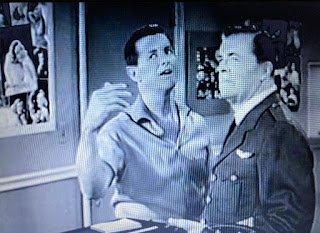 Maybe the season's the reason Pamela Livingstone's lust is turned up to 11.  She's made aggressive plays for Bob before (Bob Meets Miss Sweden, Goude's first episode) but seeing Paul and Harv being vigorously pursued tells me she's after some action, coats on the bed be damned.  Not certain how the change in locale for le affaire sauvage will affect her chances, but let's just hope that Fonda and Helm aren't driving.  In Harvey's case, let's also hope he didn't go home to Ruthie in that condition.  Since we see him again in future episodes, we can assume he didn't. 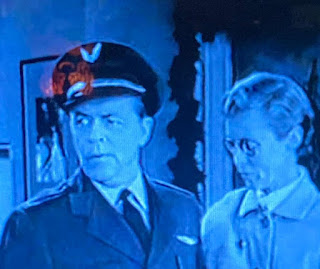 Mistletoe, parties, and Santa Claus. Well, OK, he just gets a passing mention by the ever innocent Ingrid.  Thanks to some cleverly needed "location" shots while Bob is priming her for the close, we even get snow.  Miss Sweden remains the King's kryptonite, though.  She remains unkissed by our legend when Bob's Christmas Party fades to darkroom.  We get assurances that more models are on the way, but Miss Goude is the only one who shows--for work.  Don't worry that we're going to be seeing ghosts, though--everyone is out of the workplace at 3.  Except Schultzy, who chooses to stay. 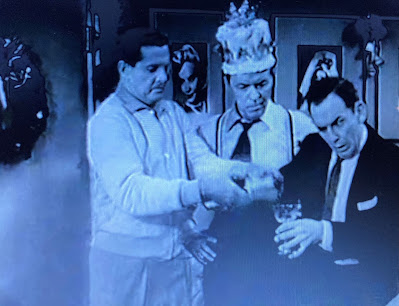 Bob's Christmas Party follows back to back seasonal segments from 1955: The Christmas Spirit and Grandpa's Christmas Visit.  The latter is ubiquitous on YouTube and bargain DVD's owing to its public domain status, but all three holiday BOBs are worth watching, as is the series as a whole.   You can check out Bob's Christmas Party here. 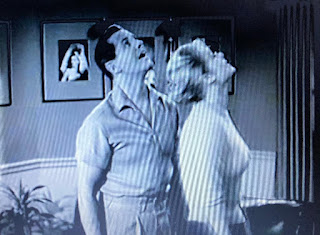 Schultzy has to block Pamela from Bob and Bob from Ingrid, Paul and Bob continually thwart each other with the latter, and ultimately, the family provides the final barrier by moving the party back to the Collins household.

Yes...unknowingly---with Schultzy!  If that doesn't prove that Christmas is the time of miracles, I don't know what will.  To be fair, the big bad wolf notching unattainable Ingrid would be even more incredible. 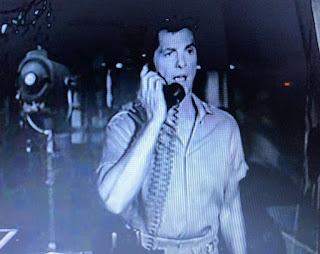 Bob's Christmas Party might not reach the heights of television's Christmas classics, nor is it one of the series' best.  But the lack of sentimentality--softened with some show-centric seasonal magic--provides a perfect capper for LOVE THAT BOB's trifecta of holiday episodes.  Watching Cummings and Talbot one-up each other is reliably funny, and seeing Bob's WWII comrades enjoying all that champagne a little too much creates more merriment.  Not enough hilarity to reach the show's top tier, but good holiday fun, and who knew that darkroom could be such a perilous place for even the most seasoned photographer?  (*** out of four)