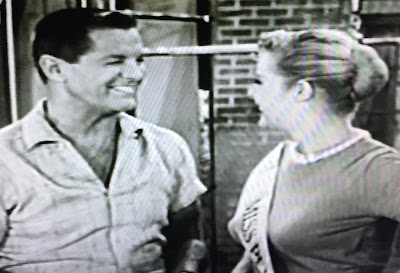 Selecting a model for client Paul Martin's advertising campaign (he sells gymnasium equipment) brings the Miss Perfect Body contest to Bob Collins' photography studio, and the lobby is filled with beautiful contestants.  Great for Bob, Chuck and everyone else who happens to be male, but a pain in the ass for Bob's no-nonsense landlady, Esther K. Flintridge.  Humorless Flintridge is nonplussed by all the extra traffic, and might finally be ready to follow through on her eviction threat after several close calls previously. 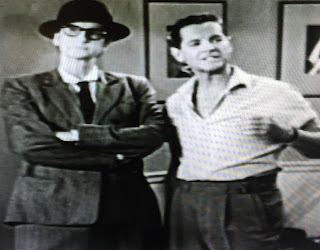 Does that look like a woman ready to be swayed by a playboy shutterbug?  Not under normal circumstances, but the old smoothie finds Ms. Flintridge's Achilles heel when he declares her to be just the "solid build" he's looking for.  Unfortunately, Bob lays it on too thick, and "choosing" his landlord over reigning Miss Sweden Goude means that our boy Bob is still trying to reach first base with his most elusive target.  Collins' troubles don't end there: he might have staved off the hunt for a new studio, but he'd better start searching for a new client once Martin steals an early peek at the physique Bob has chosen to promote the gym products. 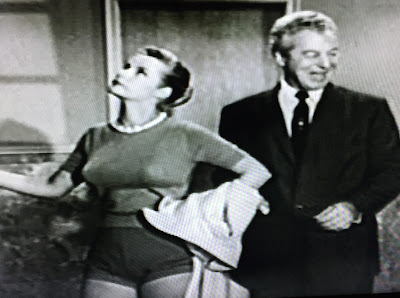 Twenty year old Ingrid Goude made over a half-dozen appearances during the 1957-58 season after her well-received debut in Bob Meets Miss Sweden.  She proved to be quite a casting coup as the lone unattainable in Bob's veritable harem of models: in addition to her aforementioned 1956 title in her native country, Goude was second runner-up to Miss Universe and first runner-up to Miss Europe the same year.  With that track record, it's little wonder that Goude could out vavavoom Bob's regulars (With the possible exception of the always eye-popping Joi Lansing.)

Goude's acting career never really took off (she retired two years after her signature role in 1959's THE KILLER SHREWS) but she effortlessly made a worthy foil for our almost invincible loverboy.  Bob would feign a "dangerous" Air Force assignment and even a mission to the moon(!) to try and impress her, but to no avail.  Her LOVE THAT BOB episodes may have occasionally been more aesthetically than comedically pleasing, but she's well used in Bob Wins the Olympics.  Losing to Carol Morris or Margit Nunke is one thing, but being bested by Hope Emerson?  Goude's reaction is understandable.  Rather painful for Bob, too, in more ways than one.


When Miss Sweden appears, it usually gives us El Brendel as well, as mycket Swedish Ole Svensen, the building's janitor.  While typically relying on Svensen for translation, Collins enlists the maintenance man for double duty here as he attempts to pawn Esther off on him--fat chance, once Ole eyeballs the pageant winner from his homeland.  A staple of Columbia's shorts department in the 1940's (usually playing an "Ole" then as well), Brendel found lots of call for his inimitable dialect on television, providing steady comic relief in prime time until his death in 1964. 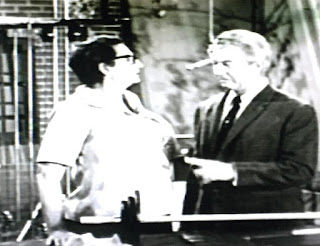 6' 2"  Emerson makes it a trifecta of thwarters in Bob Wins the Olympics.  Landlady Esther K. Flintridge usually appeared once or twice per season, always unmoved by Bob and his bevy of beauties.  Flintridge's arrival springs this door slammer into action, and for once, Collins actually succeeds in his attempt to praise the proprietor--predictably, a bit too well. 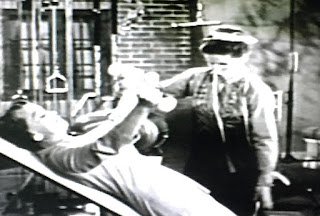 Things get a little plot-heavy for a half hour installment at times, but Goude's appearances were well placed throughout the fourth season, and she was consistently enjoyable playing her fictionalized self. Kudos again for the inexhaustible Henning-Gordon-Wesson team (responsible for all 36 of the season's episodes) and for Cummings the director, who always has the camera in just the right spot. 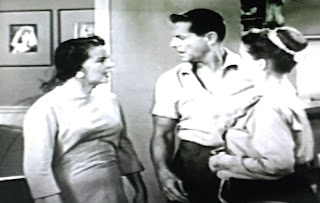 No one but Bob himself, from beginning to end.  Schultzy seemed too overwhelmed by the sheer numbers to intervene while the contest was on. 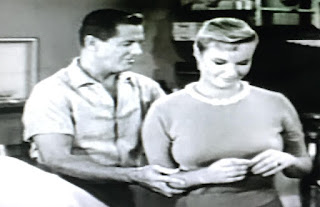 Collins the Crooner usually struck out when Miss Sweden was around, and this installment was no exception.  Though Flintridge seemed kinda interested when all was said and done....

The convolutions occasionally get in the way of the laughs, and Bob's clichéd theatrics are more stilted than usual with Flintridge (did she really buy that?).  Still, watching the indomitable ladies' man fail to land Miss Sweden is reliably amusing throughout, with guest stars Emerson and Brendel adding to the fun.  And yes, that is Emerson's CAGED co-star Ellen Corby as the nurse.  (*** out of four) 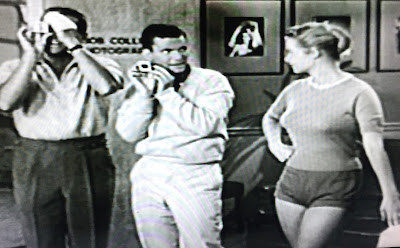 Bob Wins the Olympics is available as "Bob's Perfect Body" on DVD from Shokus Video's LOVE THAT BOB! VIII.    The Shokus release has the original "Bob Cummings Show" opening as well as the original Winston Cigarette commercials!