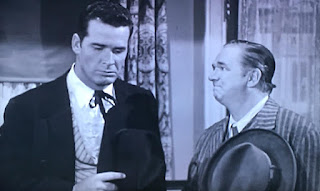 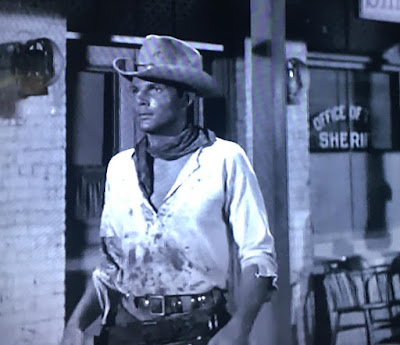 Bret's attempt to shake this newfound and mistaken reputation isn't helped by the arrival of bounty hunting Burgess, who insists that Maverick is the killer he's after.  While the impatient Smoky attempts to help his unwilling idol break out of jail, Bret has more trouble on the way: Haines, the brother of the man that "Maverick" allegedly killed.  Knowing that brother Bart is nowhere near Canyon City, Bret asserts mistaken identity, implies that they're after his brother, and sends Burgess (and by extension, the corrupt Sheriff) looking in that direction.   Meanwhile, Smoky repeatedly assures Mr. Maverick that he has his back as the Haines posse closes in. 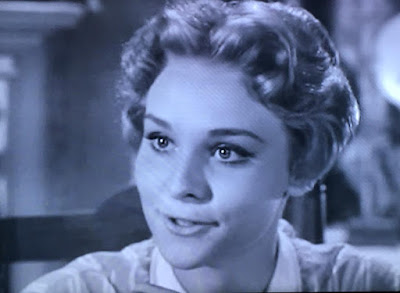 SMOKY: "You wouldn't shoot anyone in the back!"
BRET: "It's the safest place."

Always the most reluctant of all possible heroes, Bret Maverick is more disinclined than ever in the face of Smoky's misguided reverence.  Ironically, sister Holly Vaughn is right--Bret would be a very positive influence on the aspiring young gunman.  Smoky's odds of ever growing old seem long from the get-go, since he's willing and able to put his life on the line over a mud splash when we first meet him.  Not something the ever-prudent Bret would allow to escalate. 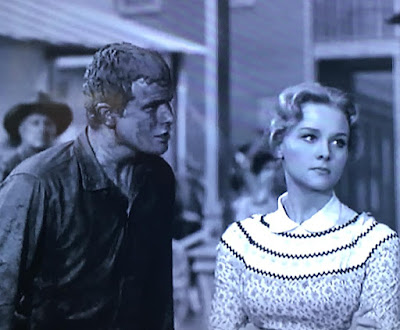 Everyone seems to believe this imperative, except pragmatic Bret.  Upon hearing that brother Bart has been gunned down, Bret's response is immediate and decisive: he's going out for breakfast.  Later we receive further clarity on the younger Maverick's location and the impossibility that this "report" could be true.  If it were, though, Bret's reaction later tells us what he thinks of this unwritten rule--he sends the bounty hunter looking for his brother!  After all, that's his problem. 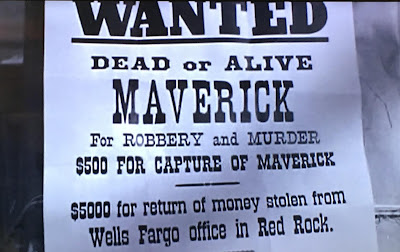 HOLLY: "Stupid, silly pride. A man is coming here to kill you.  Why must you stay here and face him?"
BRET: "Who's staying???"

In the same year that Howard Hawks made RIO BRAVO, Herman Epstein (Maverick and Juliet) came up with MAVERICK's own subtle, cheeky response to HIGH NOON.  Diane McBain (SURFSIDE 6) is our answer to Grace Kelly here (AFAIC not a bad tradeoff at all), looking out in horror from behind windows and getting the lengthy anti-Code speech--which Maverick, of course, promptly agrees with.  Bret doesn't channel Gary Cooper, hiding inside the house until Smoky foils those plans. 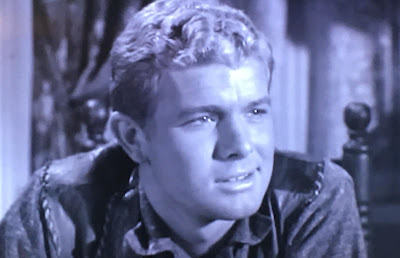 Suggesting that it is Smoky, not Bret, who is more isolated in this idolatry of honor, Jeb Haines slowly, menacingly approaches Bret Maverick--and promptly concludes that he has the wrong man.  Haines later picks a much more winnable gunfight and proves to be at least as cash-motivated as any Maverick.  The latter also applies to Burgess and the Sheriff.  So much for nobility. 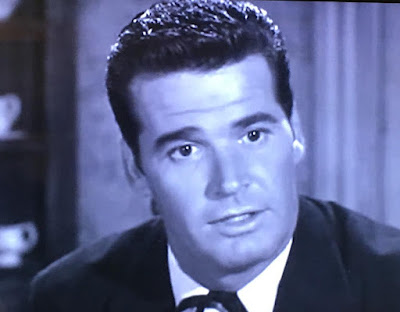 Few actors have ever been able to play put-upon annoyance like James Garner, and Gary Vinson's wonderfully earnest comedic performance brings it out, providing this show's highlight.  This was the only MAVERICK for Vinson (McHALE'S NAVY), who sadly committed suicide in 1984 at age 47.

Sam Buffington, another talented actor who died way too young by the same method just a year later (he was only 28) marks his fifth and final MAVERICK as the humorless bounty hunter.  Adam West (Pappy) also appears for a third and final segment as the feared (and fearing) gunslinger in the opening minutes. 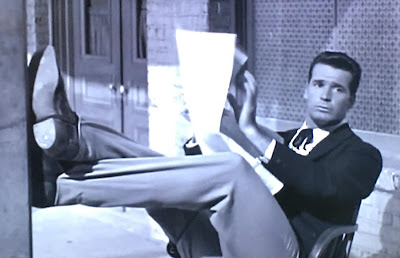 MAVERICK's third season can't quite measure up to the legendary second, but A Fellow's Brother doesn't contribute to that particular failing.  In fact, I'd say it is a more successful skewering of heroic obligations than that season's much better known The Saga of Waco Williams.  Truer to the show's universe from fade-in to fade-out, with nary a wasted line. 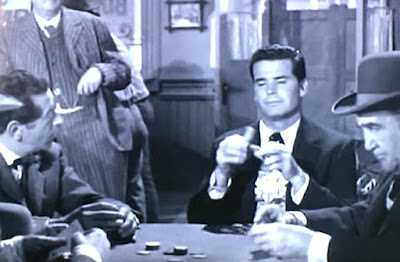 He appeared to be doing rather well at the local saloon despite the distraction; the one activity Smoky wasn't able to affect in a negative way.  Bart only appears in the closing seconds, and from the looks of things, won't be making it to the tables anytime soon. 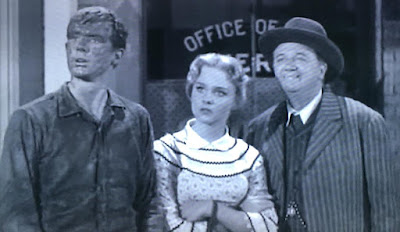 "It isn't how fast you draw that counts--it's what you draw and when you draw."  Yep, Pappy was talking about guns versus poker.  Succinct. 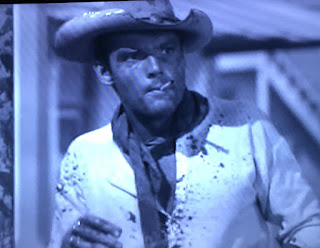 Herman Epstein is one of the unsung MAVERICK heroes, providing two of the third season's top 4 installments and two more good ones during the wildly inconsistent fourth.  A Fellow's Brother was also the first (and best) of seven segments for venerable Leslie Goodwins (The Maverick Line), who guides a sensational comic performance from Vinson, so sincere and yet so unintentionally grating--in a good way.  With all the mentions he receives throughout, it's thoroughly predictable when brother Bart shows up for the capper, which works as admirably as everything else preceding it.  (**** out of four) 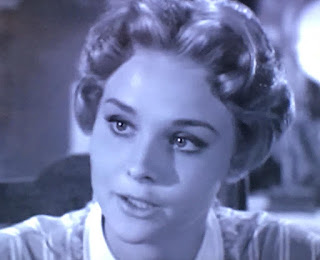