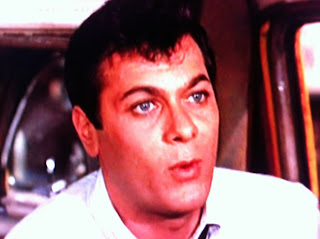 Straightlaced, naive Curtis buses from his native Milwaukee to New York City to pursue his dream of making it as a jazz saxophonist in the big city.  The fresh-faced newcomer ends up platonically sharing a cramped one room apartment with taxi dancer Reynolds, who is far less trusting after years in the Big Apple.  They begin to grow close while facing their respective obstacles: guileless Curtis becomes familiar with the hard knocks Reynolds has already experienced while she becomes deeply indebted to her shady boss Rickles. 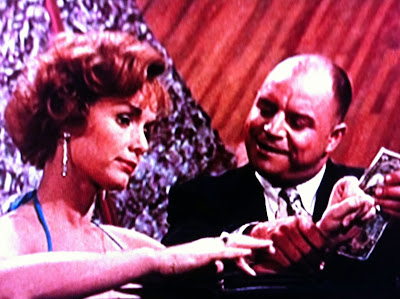 The sophomore effort from director Mulligan (TO KILL A MOCKINGBIRD), THE RAT RACE doesn't approach the authenticity of Curtis' earlier SWEET SMELL OF SUCCESS, with Pittsburgh standing in for the Big Apple.  Despite some thugs and thefts, it isn't as cynical either, with the mutual poverty of the film's protagonists never reaching (say) the Ratso Rizzo level. 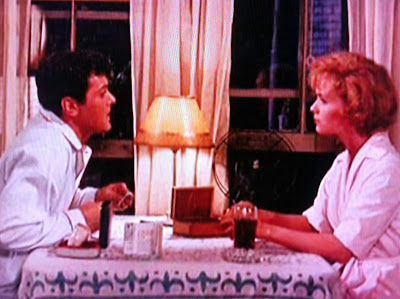 Since he was thirty-five and perhaps Hollywood's quintessential native New Yorker at the time, Curtis would seem to be miscast as a transplanted Milwaukeean who is barely out of school.  Nevertheless, the actor was credible and gave THE RAT RACE his all, learning how to play both the clarinet and the saxophone for the role.  You can only learn so much in a crash course, though, as Curtis' playing was dubbed by Gerry Mulligan (who has a cameo). 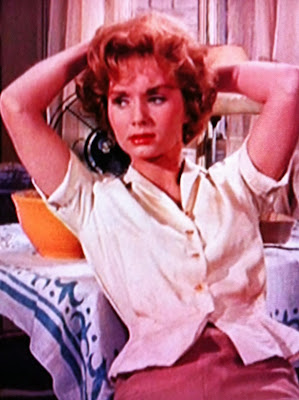 THE RAT RACE also offered Reynolds a chance to play against type as well.  Essentially it was the reverse of her co-star's situation, giving the usual ingenue a chance to play a lady with rough edges: using her wiles to get by while trying to retain her dignity.  Taxi dancers were almost extinct in NYC by 1960, but it was probably the closest profession Kanin could use to making Reynolds an "adult" entertainer by the Hollywood standards of the time.  (It's clear by her rebuffs of Rickles, Fell and others that prostitution was not a consideration for this worldly, yet prideful lady.)

Not everyone Curtis meets is a soul-crushing taker.  Oakie has some good lines and a perpetual smile as a kind bartender and brusque landlord Medford proves to have a heart of gold underneath.  Otherwise, though, this is one rough town.  Norman Fell is very funny as a telephone repairman and would-be make-out artist with eyes for Reynolds.  With only two scenes even he has time to punch Curtis in the jaw. 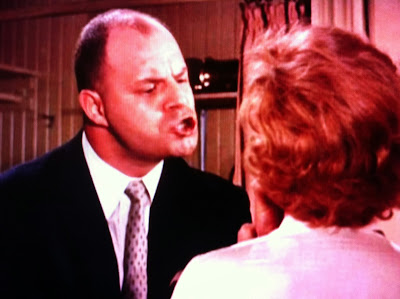 Fell isn't alone in having the hots for the dancer.  It is Don Rickles who gives THE RAT RACE's most memorable performance as Reynolds' slimy boss who wouldn't mind taking what she owes in "trade".  There's barely even a hint of humor to this menacing portrayal, which is probably the comedian's best on the big screen. 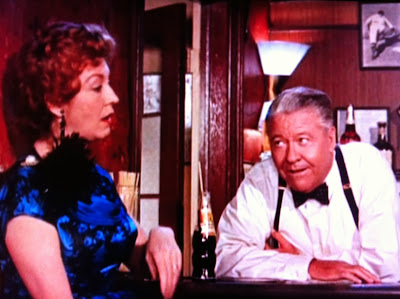 The atypically cast leads are good instead of great, and THE RAT RACE doesn't quite reach the level of the definitive hard edged NYC films of its era (THE APARTMENT, the aforementioned SWEET SMELL OF SUCCESS), but it is still a worthy effort that benefits from Mulligan's typically humanistic touch.   Ostensibly about the difficulties of succeeding in New York, THE RAT RACE is at heart a romantic drama about two opposites slowly attracting.

THE RAT RACE actually wasn't cutting enough for later generations seeking the darker side of NYC once The Code was out and films like MIDNIGHT COWBOY and TAXI DRIVER were in.  Also, you can probably blame Paramount's spotty history with its archive material once again. 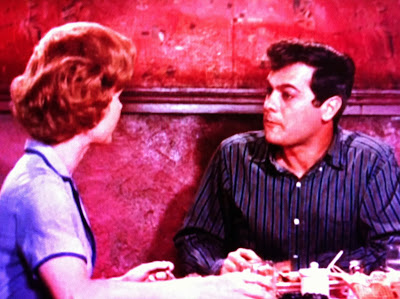 A lot of first-rate talent on both sides of the camera.  Elmer Bermstein's jazzy score, Kanin's solidly developed characters, and Mulligan's iron fist/velvet glove presentation behind it; Curtis, Reynolds, Oakie and Rickles all good-to-excellent in front of it.  While Pittsburgh was the primary location for filming, one can spot a few authentic NYC sites of the era (i.e. Jack Dempsey's Restaurant) in some shots.

And, take note, Mrs. Roper: Norman Fell is a playa! 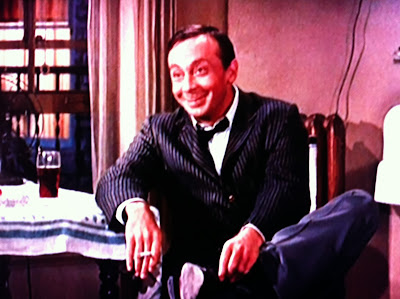 THE RAT RACE is currently streaming on Netflix Instant.

Never saw the film, but I certainly am familiar with the theme song. Every time I hear it, I think of monster trucks (that music was used in commercials for monster truck shows in the '70s and '80s).