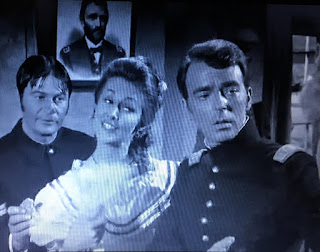 
Another week, another threat to O'Rourke Enterprises--just when business is starting to pick up after a three moon mini-slump!  Lucy Lanfield arrives on the noon stage, ready to accept a proposal from Captain Parmenter that she rejected multiple times from Private Parmenter.  Of course, her well-to-do family will arrange for the Captain's transfer back to Philadelphia, which would force Sergeant O'Rourke to break in another commanding officer if she succeeds.  Fortunately, they already have some ready-made and eager competition for the Captain's heart in Wrangler Jane. 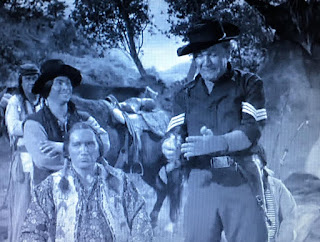 It might sound like the F TROOP version of MY FAIR LADY (which had premiered almost exactly a year prior, on October 21, 1964) but Jane's makeover isn't introduced until halfway through the second act.  Quite a bit of time is leisurely spent on the inner workings of O'Rourke Enterprises and the Captain's background in his hometown prior to his heroics at Appomattox.  Arthur Julian's script covers an impressive amount of the former in less than three minutes: the opening powwow at the Hekawi camp covers quite a bit of the former, filling us in on the year-to-date business, Wild Eagle's checking of the books ("we trust you!"), labor costs and innovations. 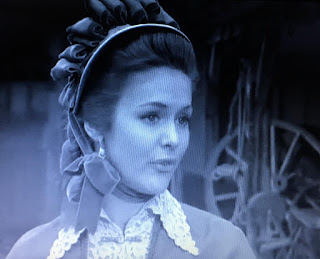 "Philadelphia is a wonderful city, it's just a shame nobody lives there!"

Once the snooty socialite arrives, we learn that she was Wilton's unattainable back home, always out with someone else when he came courting.  This despite the impressive accomplishments of the rest of the Parmenters--which of course, the Captain never lived down his failure to live up to prior to fate's intervention at the conclusion of the War.  It's no wonder Wilton throws some shade at his hometown, something that haughty Ms. Lanfield would never say about the birthplace of her family. 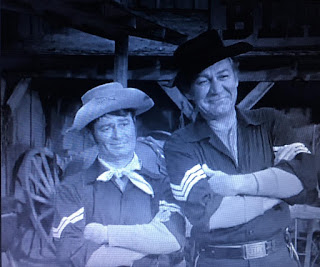 Which brings us to the major drawback in The Girl from Philadelphia: Lucy Lanfield ranks as one of the least credible threats that O'Rourke and Agarn face during the first season.  It's clear from their first scene together that her hold on the Captain has faded the young man went off to War: "wretched" Fort Courage gets a strong defense from its C.O., and Parmenter's ear-to-ear smile while learning to lasso is the only one he exhibits in Lanfield's presence.

Nevertheless, all partners in O'Rourke Enterprises are cognizant of the potential peril.  But the Sarge doesn't unleash his Professor Higgins right away, instead giving Jane a showcase for the things she does best: shooting, riding and roping.  All the socialite can do in response is upstage by fainting, which is effective enough to put the Pygmalion plan into play. 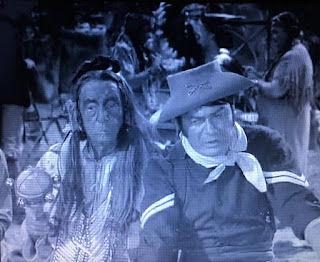 That is, once Wild Eagle inadvertently suggests it, and even purchases a dress from Carson City himself.  Refreshingly, we don't get a scene with ladylike teachings.  Hell, making Mrs. Right isn't even the only scheme in play; Roaring Chicken (still the Hekawi Agarn at this stage, in the fourth of his six appearances) decides a little insurance is needed in the form of Flying Sparrow: 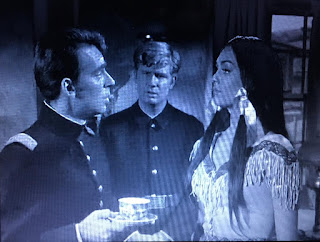 It's too bad that ballerina Laurie Sibbald (NO TIME FOR SERGEANTS) had such a brief acting career, for we sure could have used more of Ms. Sibbald on our screens.  She was a Deb Star of 1965 alongside the likes of Raquel Welch and Barbara Parkins.  The good news: Sibbald will return with a bigger role in the riotous Here Comes the Tribe.   Linda Marshall's time in front of the camera was similarly fleeting; after TAMMY was canceled in 1966 she became a full-time ambassador for the Baha'i faith. 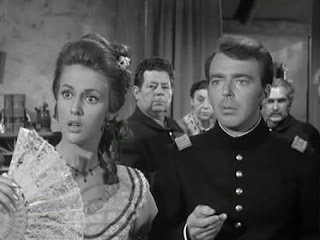 Arthur Julian had a weakness for the triple, which gives us three dropped teacups and three face-slaps for our seemingly caddish Captain.  But that foible becomes a strength at times, with a welcome and unprecedented three dollops of old Hekawi wisdom.  Town drunk Charlie returns to get thrown out of the saloon (before noon, naturally) and Julian manages a rare quadruple (of fainting spells; the capper is the funniest). 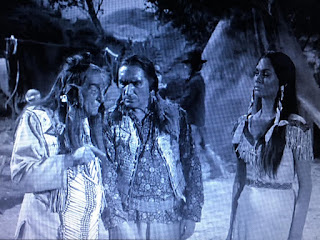 "Be brave, my dear.  I'm sure you'll find happiness with some civilian."

Janie is stealing the Philly deb's thunder even before she gets in that size 10 dress Wild Eagle orders; he's thrilled when learning to lasso himself and seeing her pistol prowess.  When Wrangler gets in that dress Wilton can't even remember making that supposed proposal to Lucy, and he barely seems bothered when gentility leaves entirely after Miss Lanfield's unladylike barbs.  So yeah, she's lacking as a threat.  Still, it's positively classic when Wilton drops the parting line above this paragraph on her.  Few actors could deliver an oblivious (or was it?) diss like Ken Berry.   Lest you think he's growing into his rank, he does manage to get his sword caught in the stagecoach door afterward.  Nice to have the old man back! 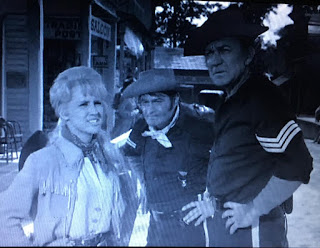 TV GUIDE's Cleveland Amory was specifically unimpressed with this installment when he penned his otherwise positive review of the series, but Melody Patterson singled it out as one of her favorites.  A punchline seems to be missing in a spot or two, but there's enough bulleyes to keep F TROOP on a winning path creatively.  Commercially, too.  For the two-week Nielsen ratings ending November 7, 1965, the show ranked 22nd with a 21.8 rating, ABC's fifth highest ranked show in the survey and a solid improvement over lead-in McHALE'S NAVY's 20.4. 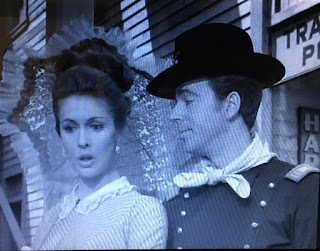 The Hekawis are not the only Native business partners in O'Rourke Enterprises; the arrowheads are made by a tribe in Oklahoma and shipped via stage.  To be fair, this frees up time for creativity; inventive Running Deer devises a toy tomahawk, a feat that nonetheless doesn't even net him any dialogue, much less a copyright.

The appearance of Charlie in Dirge for the Scourge apparently followed his purchase from Dodge City, which luckily had an extra drunk for the remote outpost.

The cookies at the tea party are loaded with rum.  Is Wilton trying to get Janie drunk?  Shame on you Captain!

O'Rourke gives Wild Eagle the full report at the powwow; things picked up nicely in the fourth moon after a three moon recession, with the current moon expected to be the biggest so far, despite the extra expenses involved with the Oklahoma delegation of arrowheads. 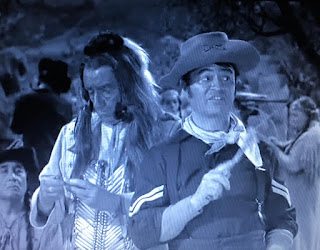 As mentioned, three, which gives us more than any other episode!

"Bark of tree never bitter to hungry squirrel."  The Chief admits that it loses something in translation.

"Sparrow fly high, but cannot build dam with tail of beaver." Can't argue with that one!

Finally, from Roaring Chicken, who is certainly old enough to be wise:

"You always have empty tepee when frost is on buffalo's nose."  Wild Eagle can only admiringly wish aloud that he'd said it. 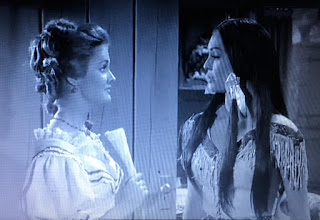 Lucy Lanfield certainly isn't with her comments to Silver Dove, though to be fair she finds everyone beneath her (even the Captain, until now).  Notably, Wrangler Jane turns to Wild Eagle for advice on how to woo a Captain.

Themes here would be much better explored in succeeding segments: The Courtship of Wrangler Jane is a much funnier attempt at matchmaking, and A Fort's Best Friend is Not a Mother gives us a far more imposing threat to take The Scourge of the West back east.  The F TROOP formula is still being calculated in episode 7 and it shows, but notwithstanding I still find this one funnier and more interesting on its own terms than Amory found it IMO.  If it fails to match the hilarity of the first three F TROOP installments, The Girl from Philadelphia is a notch above Corporal Agarn's Farewell to the Troops and The Return of Bald Eagle.  (*** out of four)
Posted by Hal at 6:08 PM

A notch above a guest shot by Don Rickles???? Seriously, Hal?

Yes. As great as Rickles was, that episode's script was uneven; went downhill after a great first half.