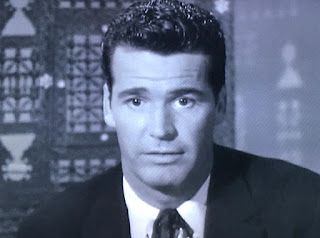 
Getting up to cash in his poker winnings in the titular township's (population 1,018) saloon, Bret gets credit for the inadvertent result of an agitated horse's kick: the subduing of town bully Ferguson.  That makes him the closest candidate the unfortunate city has to replace the recently departed sheriff, with a little bit of blackmail--the impounding of Bret's winnings--inducing a six month appointment. 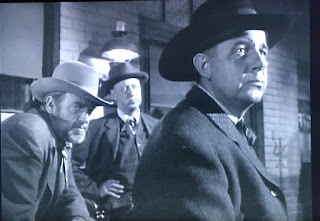 Maverick's first day on the job starts inauspiciously: he learns he's the twenty-third sheriff that his new deputy has worked for, and Bimbo Ferguson is determined to wreck Duck n' Shoot as vengeance for his brother's incarceration.  On the other hand, newcomer Melissa ("Call me Missy") Maybrook wants to make the sheriff's acquaintance, so it isn't all bad...or is it?  She's also secretly partnering with Danton and Leslie, well known bank robbers who will be the novice lawman's next challenge. 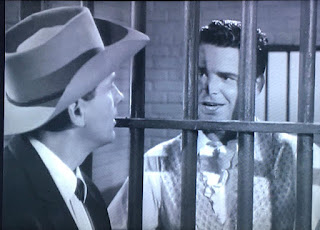 "I'm unreliable.  I'm a terrible shot.  And this I mean most sincerely--I have been for as long as I can remember--a coward."

Despite the shortcomings that Bret modestly details, he turns out to be the most successful lawman in the history of Duck 'n' Shoot.  (At least, for a month--more on that below.)  Yes, the disabling of Frank was nothing more than dumb luck, but that was before Bret had the badge.  Reluctantly pinning it on and trying to hide it as he does, Maverick nevertheless deserves full credit for the vast reduction in crime on his watch.  The methods are all his. 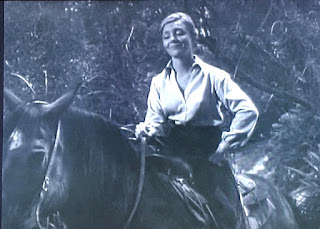 When Bimbo arrives to test out the new Sheriff by trashing the town, Bret gambles with him--winning a day's incarceration with three nines to the junior Ferguson's two pair.   When a fight breaks out in the saloon, Bret wins money on it--which disgusts the participants into peace.  Interestingly, Bret subtly cheats on both occasions, something he'd never do (he never has to) while he's at the poker table.  Tellingly, Maverick only feels guilty about his deception with the deck.  ("Forgive me, Mr. Hoyle" he says with raised eyes.  Begging God's forgiveness?) 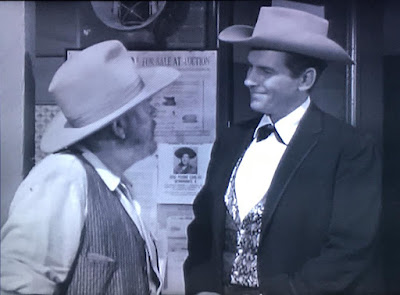 One can't fully blame Bret Maverick for keeping such income supplements with a salary of $84 a month keeping him away from a poker table that netted him nearly sixty times that in a day.  (I counted $260 in brawl-related winnings, myself.)   The Judge admits that Bret is earning every penny--as long as he's dealing with male criminals.  As might be expected, Bret's weakness is Missy Maybrook.  Bret doesn't completely trust her--note his relocation of the bank's funds once he thinks she's out of eyeshot--but she proves to be his Achilles heel nevertheless.  Too bad--Deputy Waker might well have put Bret's picture on the wall alongside Pat Garrett's if he'd kept that early momentum going. 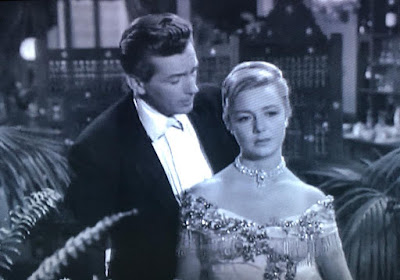 "Then throw in nine more 'helps'."

As he had in Shady Deal at Sunny Acres, Bart comes to his brother's aid capably.  Naturally, it is strongly hinted that collecting a debt from Bret brings him to the titular town more than any sense of brotherly love.  Bart proves less susceptible to the winsome lass than his brother, but clearly knows they have the same limitations: the younger brother is notably leery at having to resist her for a long period of time in the coda.  Peggy McCay had one of television's longest careers (started in 1949, ended in 2017!) and would return to bedevil both Mavericks again in The Maverick Line. 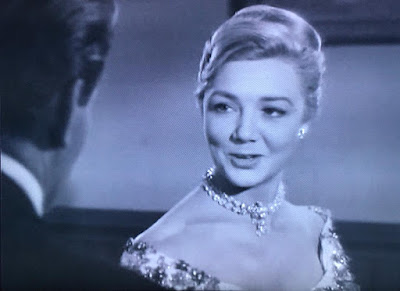 The Sheriff of Duck 'n' Shoot is also an auspicious debut for both its director and writer.  George waGGner was most often behind the camera on 77 SUNSET STRIP (he helmed 41 episodes), but returned to show his serious side: he wrote and directed his next installment, the underrated You Can't Beat the Percentage.  Leonard Driskill turned out to be a one-hit wonder after this hilarious opener, at least as far as MAVERICK goes: his second and last teleplay for the series was the disappointing Trooper Maverick.  This one, though, is near-perfectly paced and very well calculated, with only Maybrook's decision to back Bart seeming slightly perfunctory.

A sly commentary on the merits of the peace officer versus the law-and-order type, The Sheriff of Duck 'n' Shoot makes that point as well as any ANDY GRIFFITH SHOW, and for my money even better than Garner's later hit SUPPORT YOUR LOCAL SHERIFF!.  Further analysis on the virtue of being a rascal while taking on other rascals is pure MAVERICK--and pure fun from start to finish.  Another one of those episodes that demonstrates what made the series special, and a surprising number of those remained even after the loss of series creator Roy Huggins. 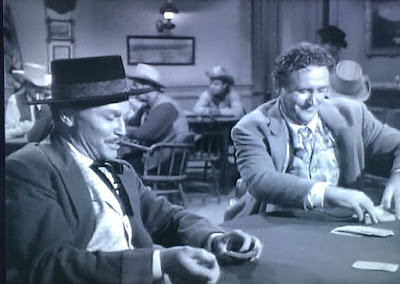 $5,000 in winnings for Bret that the judge is holding in escrow.  Not too shabby, but actually pales in comparison to the success enjoyed by our crooks at the table: Leslie pockets $8,000 and Danton a whopping $12,000 respectively on the night they were supposed to be robbing the bank!  Who needs criminal activity?  And if the locals are that loaded and that terrible at the table, why isn't Duck 'n' Shoot a regular stop on the Maverick Poker Tour?

Driskell gives us more Pappyisms than I can recall in any other single episode: five.

"The worst crime a man can commit is to interrupt a poker game."  Very true, Beauregard.

"If you know a man's weakness, you know the way to his heart."  The Judge is convinced of Pappy's intelligence with this one.

"Try everything once, and if you don't succeed, then become a lawman."  One of Pappy's truest proverbs?  Bret and Bart both tried to follow it.

"The next best thing to money is a man's name on the dotted line."  However, Bart was quickly contradicted by brother Bret on this one, who recalled Pappy saying:

"Sign nothing."  Indeed, the wise one was prone to contradict himself from time to time.

Driskell must have been tapped out, since Pappy had nothing further to offer in Trooper Maverick. 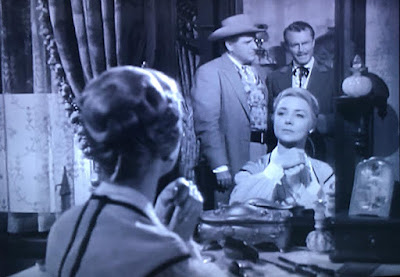 Three episodes into his stint as producer, Coles Trapnell shows that he has the juice to keep MAVERICK as subversive as before.  Both brothers take a turn in the Sheriff's office and demonstrate that brains can triumph over brawn in that profession, too.  As long as the big head does the thinking for the little head, anyway.  The Sheriff of Duck 'n' Shoot arguably bests even SUPPORT YOUR LOCAL SHERIFF!, going light on the silliness once the far-fetched knockout of Ferguson is out of the way.  With just the right amount of time taken to get to its twists and effective brotherly one-upmanship at its most concise, this is among the season's best.  (**** out of four)


MAVERICK airs Monday through Friday commercial-free at 3:10 P.M. Central on Encore Westerns, and every Saturday morning at 9 A.M. on MeTV.

Why did he say forgive me Mr.Hoyle?

Bret was referencing Edmund Hoyle's book on the rules of poker, letting us know that he'd rigged the deck in order to win the hand and jail Bimbo.