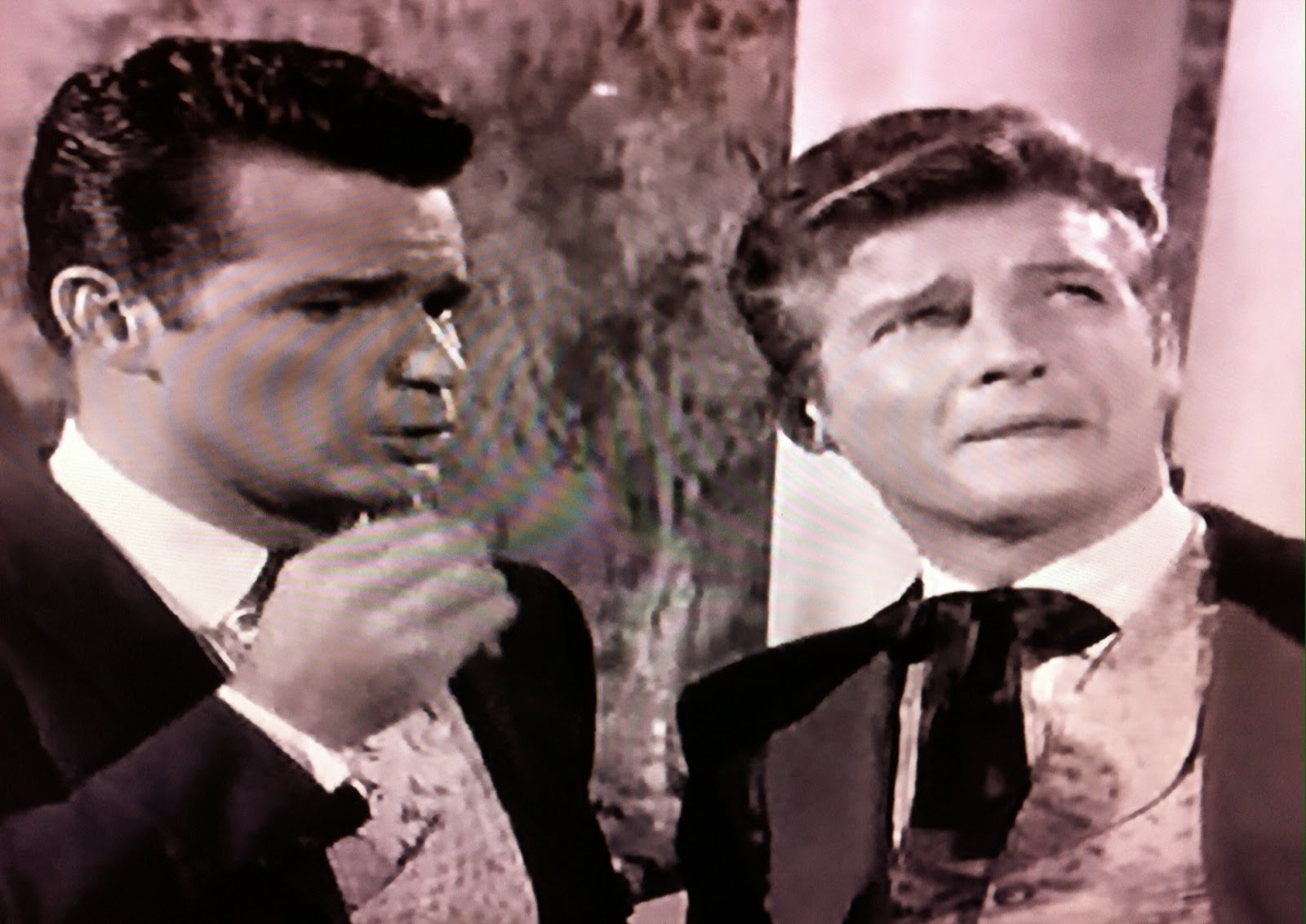 Traveling by train, the Maverick brothers part ways at the Denver stop, with Bart choosing the poker games there and Bret setting his sights on greener pastures further down the track: the exclusive Great Western Hotel and Casino at Hope Springs.  As he departs, Bart wishes his brother luck, noting that "they won't let you in unless your name is Vanderbilt, Vandergelt, Stuyvesant or Astor".  Enter John, a fellow passenger who just happens to have that Vandergelt last name.  As luck would have it, John has been eavesdropping and has a business proposal for the remaining Maverick. 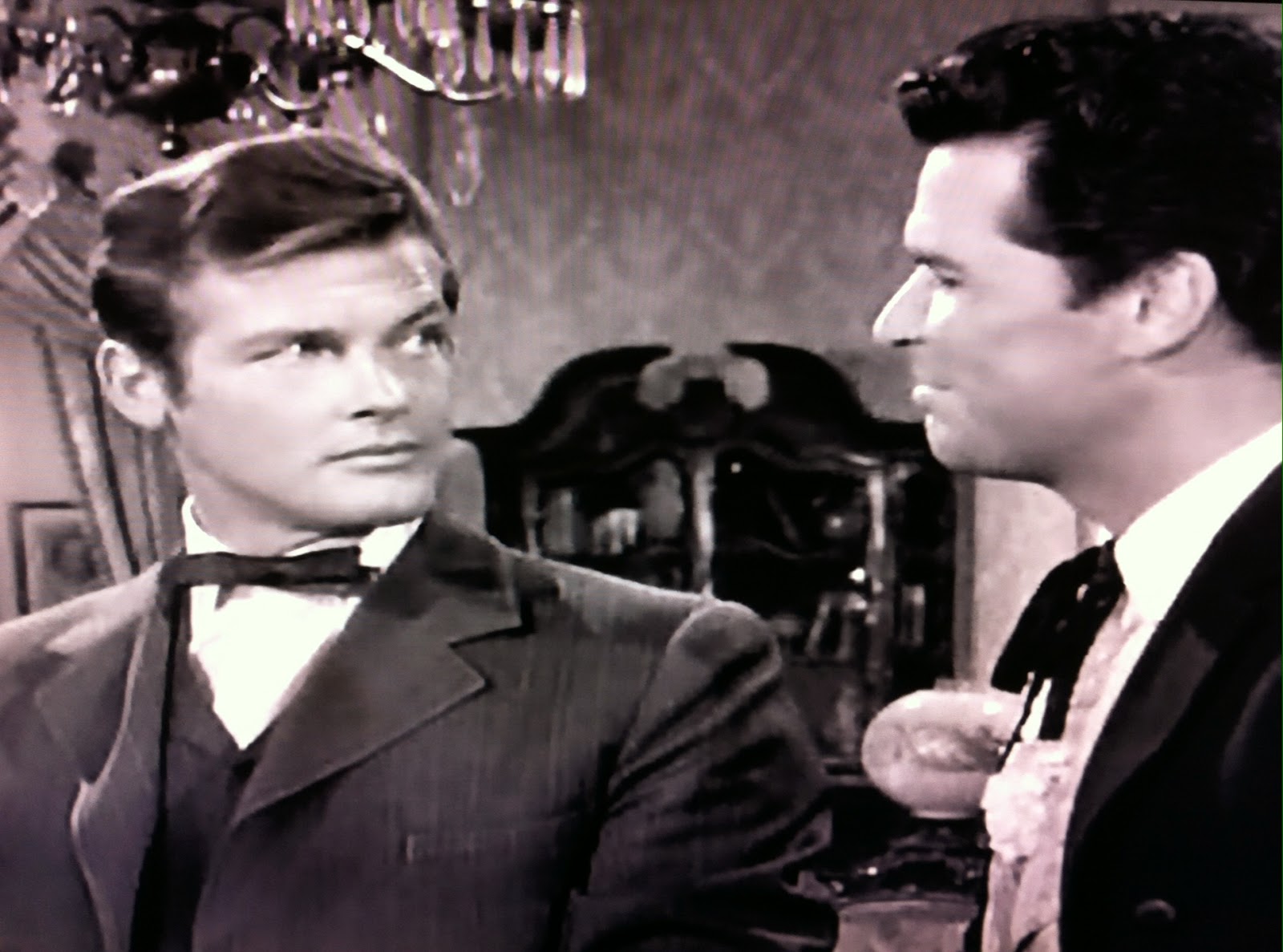 John proposes an identity switch with Bret in order to woo Ms. Lynley incognito.  The Vandergelt heir has had his eye on the lovely Lydia for awhile but wants to be loved for his personality instead of his money.  He's also done his homework from afar and knows that they have a lot in common: she's a fellow bookworm who prefers "peasant pride" to riches, so his financial status would actually be a severe obstacle.  The exchange will also provide Bret with $1,000 per week to bankroll his casino entry, but of course, complications ensue.  Bret develops an attraction to Lynley himself, and Vandergelt's father Archibald arrives, ready to "do business" on an arranged marriage for his son. 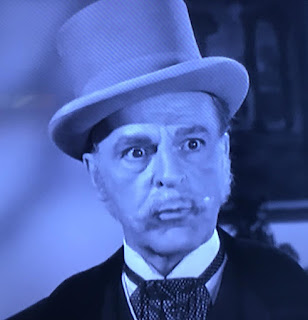 The author of several essential MAVERICK installments, Hargrove adapted The Rivals (at Roy Huggins' suggestion) from the classic 1775 play of the same name by Richard Brinsley Sheridan.  Director Martinson once stated that Hargrove "had a bead on MAVERICK that no other writer had" and the droll dialogue is perfect for both Moore and Garner, with their crisp banter driving this very entertaining episode.  It's also amusing to see Bret Maverick interacting with the senior Vandergelt in the final act, with the General's practical statements seeming to have a more receptive audience with the money loving poker player than with his own son. 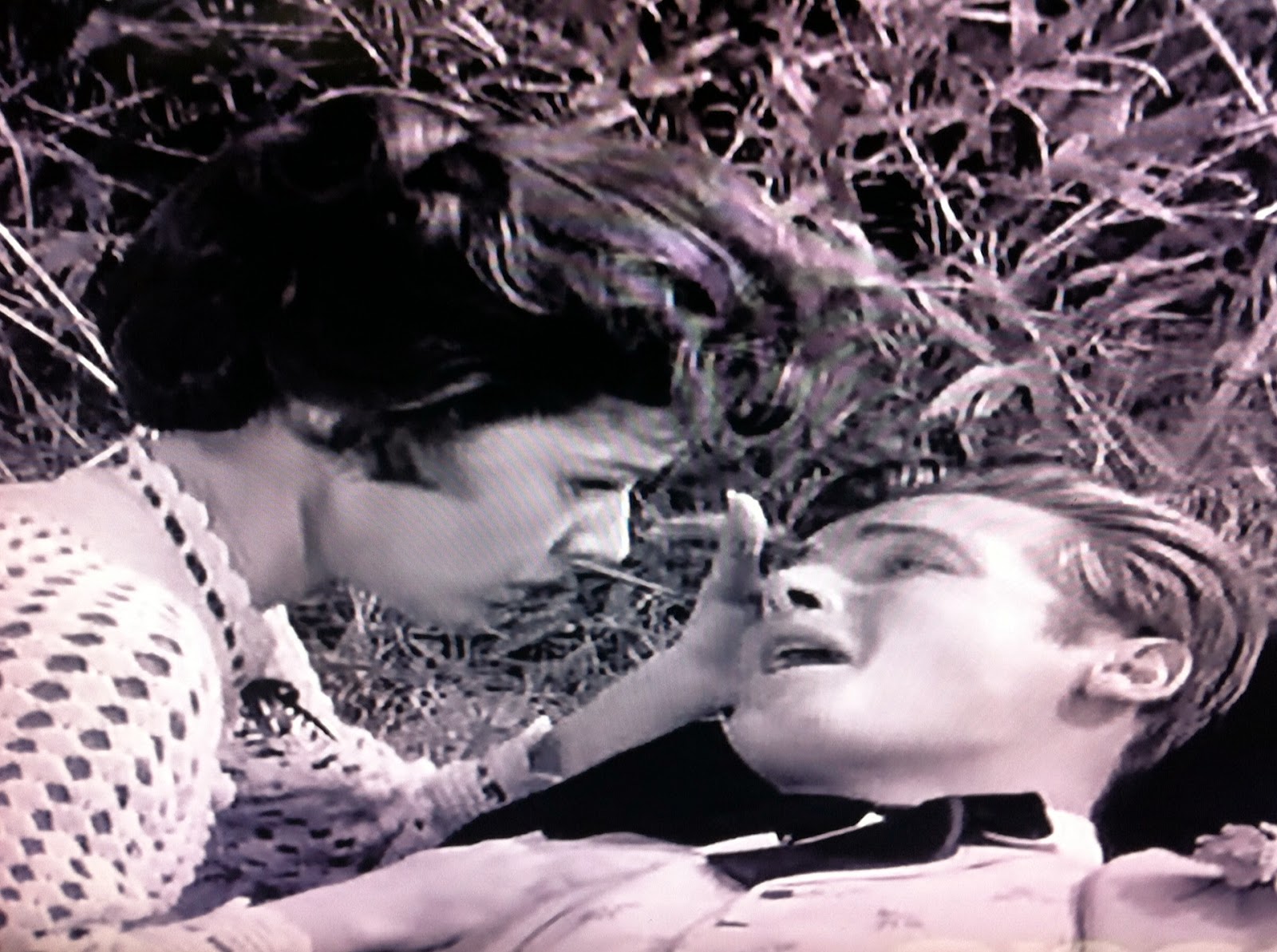 Moore's "poor rich boy" is bemused as both Bret (referring to John's "bland, stupid look") and General Vandergelt ("You'd better take it easy until you get used to it" is the General's response to "I've been thinking") get their verbal shots in, and the confident junior Vandergelt shows he can dish it out in return.  The closest he comes to losing his stoicism comes after the ruse is discovered by his intended (deadpanning that he'll "go upstairs and open a vein").  The future James Bond fits nicely into the MAVERICK universe, and his performance in The Rivals led to him being cast as Cousin Beau Maverick after Garner's departure a year later. 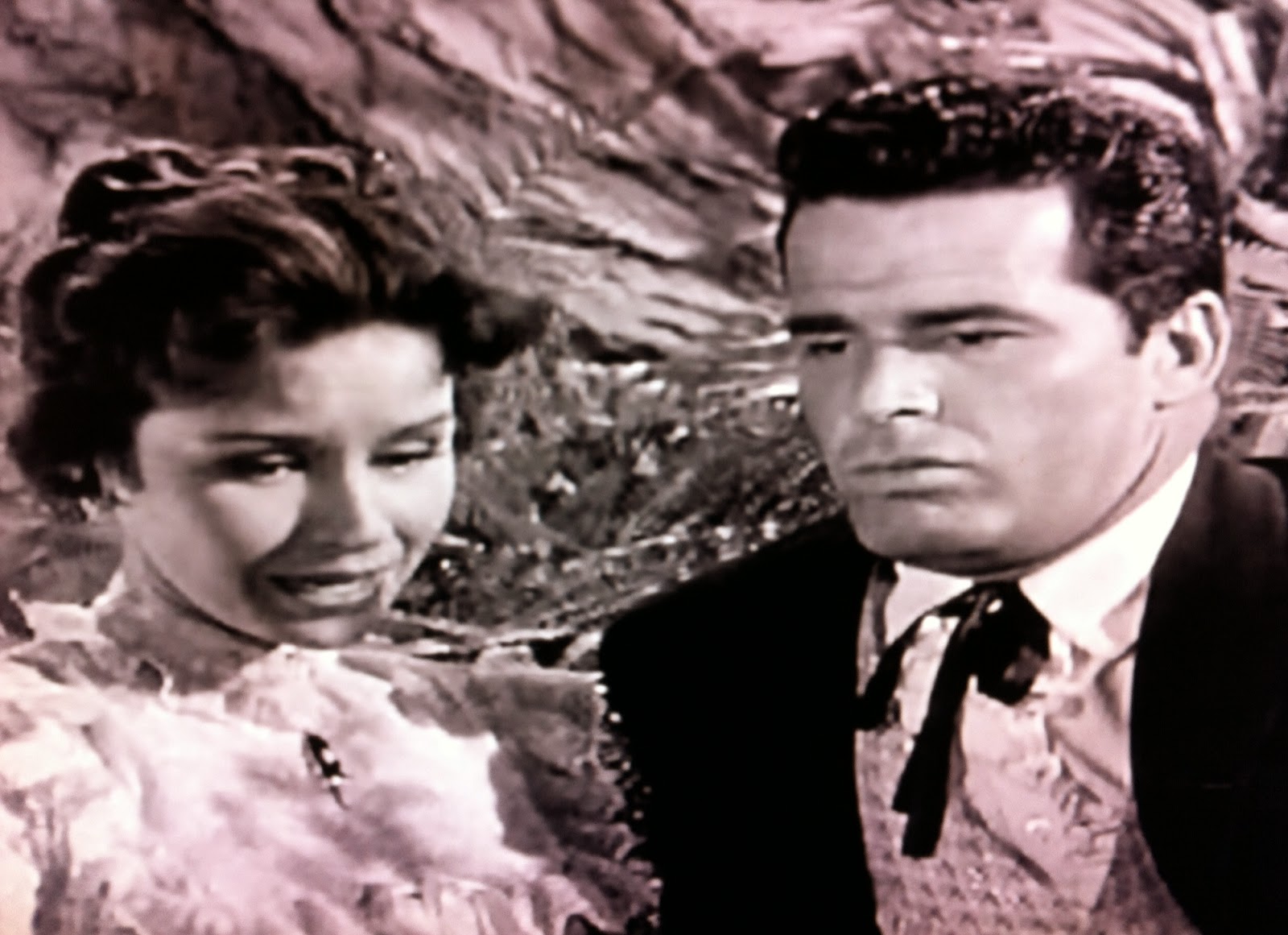 Garner's Bret isn't quite as put upon in The Rivals as he is in other Hargrove classics (Gun-Shy, The Jail at Junction Flats) but still exhibits plenty of quiet frustration throughout, ending with Brother Bart creatively getting that seat in the Hope Springs poker game that Bret had been seeking since his arrival.  In Hargrove's original script, Bart's bookending cameos were written for Bret's nemesis Dandy Jim Buckley, but Efrem Zimbalist, Jr. was unavailable (his 77 SUNSET STRIP had become a smash in its first season).  Given the constant undercurrent of competition between Bret and Bart, the denouement works just as well with the change, which the author approved.

With funny lines for just about everyone, including Crowley's principled ingenue and Hamilton's bullying blue blood, The Rivals doesn't have to coast on the chemistry between Garner and Moore, but it easily could have.  There's a healthy respect between two resourceful individuals underneath each witty retort.  The potential realized here by Hargrove and Martinson makes one wish that Garner and the studio could have somehow resolved their differences, since it would have been fun to see Bret, Bart and cousin Beau team up at least once.

Unfortunately, by the time Roger Moore joined MAVERICK as a member of the family, Hargrove, Douglas Heyes, Roy Huggins and Russell Hughes were all long gone from the series (Hughes passed away in 1958) and the uneven quality of the scripts for that fourth season reflected the substantial creative losses.  In fact, The Rivals ended up being Hargrove's MAVERICK swan song, a classy and hilarious high point to bow out on. 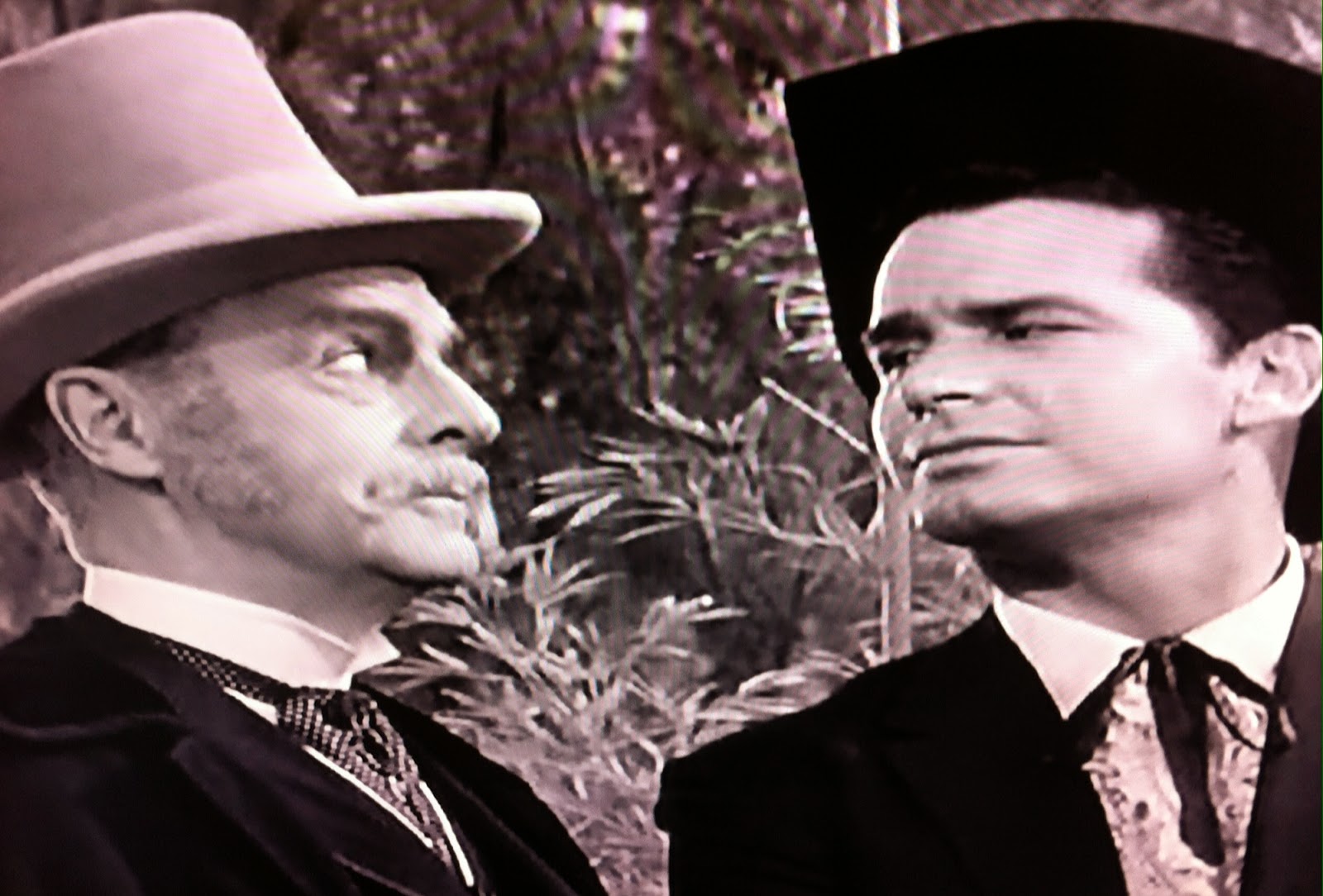 With one obstacle after another standing in his way, Bret never does make it to the poker room until it is too late, and his ruse is discovered.  Brother Bart's success in Denver is unknown, but he must not have fared too badly, since his bankroll was obviously healthy enough for him to pass for an English Lord.

"Early to bed and early to rise is the curse of the working class." (Side note: Bob Collins of LOVE THAT BOB had his own variation on Benjamin Franklin's famous quote, which we will visit in the next installment of that episode guide.) 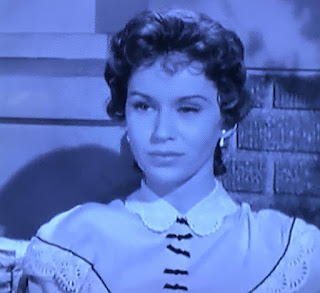 The Rivals was one Marion Hargrove's finest efforts, ambitiously tackling the highbrow source material with ample sprinkling of the writer's dark sense of humor.   An absolute hoot from beginning to end, with funny lines for almost everyone ("What Vandergelt conscience?" from Hamilton is one of my favorites) and Jack Kelly getting one of his biggest laughs of the entire series with barely sixty seconds of screen time.  Without question the very best MAVERICK episode featuring future regular Roger Moore, The Rivals is virtually flawless.  (**** out of four)

Your MAVERICK write-ups are as entertaining as the episodes themselves. Great job.

Thanks Max, and thanks for reading. I'm looking forward to writing up 116 more. :-)

Thanks great review of one of my favorite episodes.