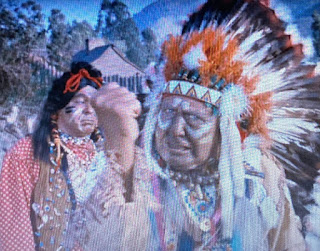 Ancient Chieftan Flaming Arrow, noblest of all Hekawis, serves notice via literal flaming arrows that he is coming back--soon.  Perhaps the oldest person to come down from the mountain since Moses, the 147 year old leader has been up there for the last fifty of those years according to Wild Eagle.  Perhaps his long absence is explained by a humiliating defeat circa 1817--"last time he came down stirred up big fight between palefaces and Indians!".  Ah, but he's surely mellowed in half a century, right?

PARMENTER: "We come in peace!"

WILD EAGLE (shrugging): "What else?" 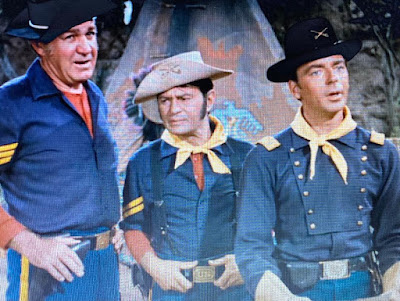 If you guessed that Flaming Arrow's flashy entrance was a bit of psychological warfare, you're right--he's determined to get the entire United States back, starting with Fort Courage.  Forget the possible end to O'Rourke Enterprises this time--the F Troopers find their very lives at stake for once.  How can these 19th century soldiers reach a peaceful resolution with an ancient Chieftan who hasn't trusted a single paleface since the Revolutionary War era nearly a hundred years past?

AGARN: "Remember, he who quits and runs away will live to quit another day!" Working with his childhood hero Phil Harris a second time (after THE WILD BLUE YONDER) had to be a joyous experience for Forrest Tucker.  As a teenager Tuck watched the future radio icon turn a "dispirited and desolate" Chicago audience into "a happy and hopeful congregation" in the Depressed mid-1930's.  Tucker credited that afternoon with his own entry into show business, and Harris later impacted Forrest's career a second time by suggesting Tuck to Morton da Costa for the role of Professor Harold Hill in THE MUSIC MAN--a role Tucker would play 2,038 times onstage from 1958-1963. 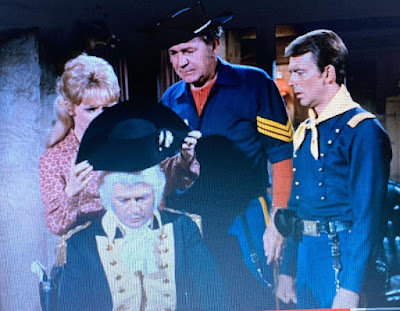 FLAMING ARROW: "Me old--but me not THAT old!"

In a series with too many colorful guest stars to count in its truncated run, Harris establishes himself near the top of the hilarious heap.  Flaming Arrow has been a veritable Forrest Gump across two centuries, close to George Washington, Abraham Lincoln, Betsy Ross and "Silly Ben" Franklin among others.  Usually the most gregarious of personalities (it's easy to see his influence on Tucker's comedic persona), Harris is atypically deadpan and truculent here--and it's an inspired approach, enabling him to make the most out of every absurd line Team Kalish gives him.

AGARN: "Sarge, if I'd thought there was going to be any fighting, I'd have never joined the army!' 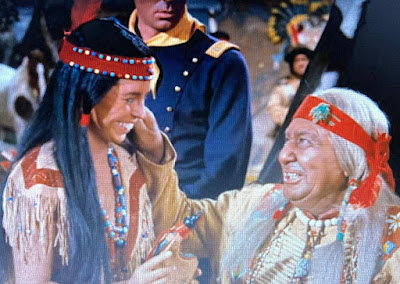 In-jokes and easter eggs abound for fans of the guest and F TROOP regulars alike.  Wild Eagle references the aforementioned MUSIC MAN early, and bandleader Harris starts the war drums as only he can.  Marilyn Fisk (The New I.G. and Lt. O'Rourke Front and Center), a.k.a. Mrs. Forrest Tucker, makes her third and final series appearance as a Hekawi maiden bringing Flaming Arrow the berry juice that appears to be his personal key to longevity.

FLAMING ARROW: "They not make palefaces like that anymore!"

So you have one of the loopiest F TROOP premises (which is really saying something), a surfeit of hilarious lines delivered matter-of-factly, another Larry Storch historical impersonation (for my money, just a notch below his General Grant) and inspired use of one of the show's most memorable guest stars. So what's not to like?  Well, What Are You Doing After the Massacre unfortunately has that biggest of problems--one involving willing suspension of disbelief. 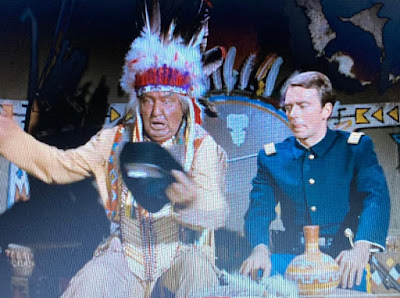 CRAZY CAT: Why not attack tonight?

FLAMING ARROW: That not real reason.  Indians...afraid of dark!

After all we've learned about Hekawi history (lovers not fighters, inventors of the peace pipe) it is just too big a stretch to buy this tribe's icon as a bloodthirsty warrior who ends their pragmatic ways and transforms these Natives into savage conquerors who don't care about money.  Surely Wild Eagle would be surreptitiously undermining Flaming Arrow as much as any other threat to his peace and prosperity--I mean, come on the ancient leader's campaign would mean living off the land all the way to Washington D.C.!  One simply can't buy these chicken hearted lovers of the easy life chunking the O'Rourke Enterprises gravy train on anyone's whim--not even Flaming Arrow's. 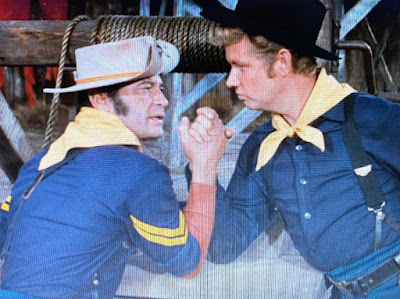 It's a pretty big wound in the middle of everything, but not fatal, not with all the goodies in abundance surrounding it.  What Are You Doing After the Massacre? is overall another inventive segment from the Kalish team, and probably the best effort from Phil Rawlins once the longtime assistant director graduated to helm 7 installments during the color season.  Rawlins went on to helm multiple episodes of ADAM-12 and THE HIGH CHAPARRAL after establishing himself with Fort Courage's finest.

Flaming Arrow's failure to take land back had to take place around 1817, and he's been in seclusion on the mountain for fifty years since.  So exactly how did he get close to Abraham Lincoln near his 120th birthday (1840-ish), since he's hated the white man for at least that long?

Also: why didn't the venerable warrior utilize a blockade the first time around, instead of the direct attack that cost him so many braves?  If Flaming Arrow was that close to the Father of Our Country, he should have had a front row seat for the highly successful 1781 Siege of Yorktown, or at least discussed it.  Why not try that approach against a superior force while it was fresher in his then-97 year old mind? 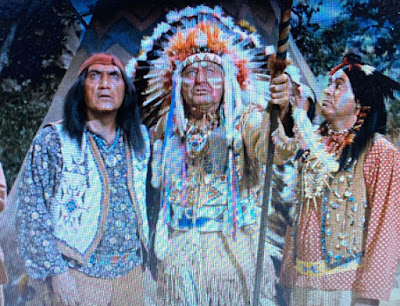 Flaming Arrow smashes two full bottles of whiskey without even flinching.  If that isn't (86) proof of Phil Harris disappearing into his role, I don't know what is.  (Incidentally, Phil Harris AND Forrest Tucker on the set all week?  I bet the tapings after lunch rivaled the late week MATCH GAMEs of the Seventies....)

Non-existent, and almost defunct until its Vice President overcomes a shaky start and saves the day.

Zero, though it was his idea to have Agarn impersonate a General for the second time.  Is it really prosecutable when that officer has been dead 68 years?

"When crow lay egg in treetop nest, then he who plant corn on hillside facing sunrise will play with deer and not with antelope."  A bit long-winded, but Parmenter found it interesting. 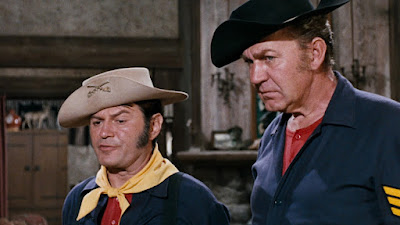 Sure can't accuse the writers of any ageism.  At 147 years young, Flaming Arrow learns new tricks in battle and successfully outmaneuvers a Captain who is over a century younger.  Agarn's observation that he is "feeble but not feeble minded" is apt--it's sentimentality, not senility that finally subdues the venerable warrior.  The old Chief and the old Commander-in-Chief were blood brothers, a bromance long before anyone coined the term: Flaming Arrow even calls Yankee Doodle "our song"!

There's as many funny lines in this script as any from the sophomore season, and it's pure gold watching the scene stealing Harris interacting with Storch and Berry.  Unfortunately, Austin and Irma Kalish stray too far from the show's established universe (a common problem for the color segments) for this one to reach peak F TROOP.  A very flawed premise executed to perfection--even the lampshading of Agarn's impersonation (he really does look more like Jefferson) is hilariously transparent.  Ultimately the sheer chutzpah and the number of laughs upon rereview has me raising my original rating to.... (*** out of four)

I nearly always missed F-Troop because my stop was at the end of the bus line, and it came on at 3:30pm. I got home at 4pm. I loved every episode that I got a chance to see.

Hi, John, thanks for reading! I had the opposite problem for a long time, it came on right at the time I had to head to school (8 AM, right after the 3 Stooges) for a time. Too bad VCR's were a few years away from being common :)

Well, since I was raised up on Wilder mountain, I managed to find things to do. Made models, hiked, fished, rode my bike, read books.

Such a desolate wasteland before the Internet.

so true. In my youth, we were outside the city too; we had bird dogs and a lot of other animals (mostly outdoors) in addition to the reading and bike riding. But I never started until F Troop was over. :-)

I didn't have that problem.

When cable arrived in the 518 in the mid-70's, F-Troop aired in NYC on Sundays, ahead of the Abbott & Costello movie of the week. Once they played out the two seasons, A & C's show would replace it, and they'd go back & forth like that for several years.

There's an episode of one of those anthologies from the 50's in which Tuck shares the screen with Bette Davis (!). I'm going to post it on my blog one of these fine days!!

I got WPIX and WOR out of New York on satellite dish once we got one in '82, the former had F Troop and the latter had Bilko on non school hours. WPIX edited about 2 minutes out of each episode though.

For extra ads, no doubt.