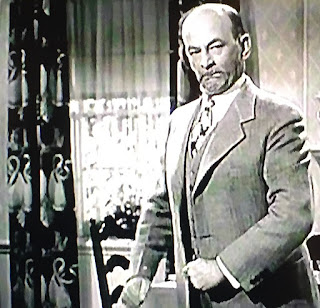 
Businessman Errol isn't wild about daughter Pearce's chosen mate, profligate O'Keefe.  To stop them from marrying, Leon lays down the law: he won't approve of the wedding until O'Keefe has one thousand dollars in a savings account (approximately $17,600 in today's dollars).  Underestimating the suitor's determination, "Pop" confidently offers to match the sum once O'Keefe reaches his goal. 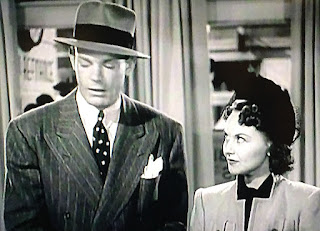 As you might guess, ol' Rubberlegs soon regrets that decision.  With Pearce's prodding, O'Keefe sells his overpriced car and frugally begins fattening his savings account.  Meanwhile, Errol experiences a severe financial slump.  Rejected for a bank loan and facing a forced merger with rival Middlemass, Leon resorts to a desperate measure--the attempted robbery of his own home. 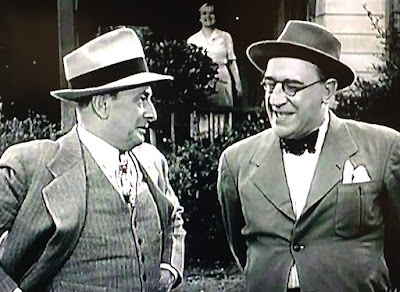 Along with Edgar Kennedy, Errol was a go-to guy for RKO short subjects for two decades, and the prolific comedian also frequently headlined "B" movies for the studio.  On its surface, POP ALWAYS PAYS appears to be a padded two-reeler sans the London Bridge theme song (sort of: Errol sings it briefly at once point).  But look deeper, and fans of the flexibly limbed star will find several atypical elements this time around.

For starters, you won't see that wobbling walk of the inebriated: Leon drinks nothing stronger than orange juice.  Philandering?  The only thing Errol is trying to hide from Gatesman is his face-saving attempt to pawn her jewelry.  Is she mad at him for that?  No, the Mrs. subtly and quietly nudges the supposed master of the house into the directions she desires (i.e. in favor of their daughter's marriage), playing chess to Leon's checkers.  The nominal head of the Errol household fares no better with maid Anderson, multiple firings and re-hirings notwithstanding.  Add in mooching next door neighbor Catlett, who--reminiscent of Jack Rice's brother-in-law in the Average Man shorts--essentially manages to stock his kitchen at Leon's expense, and POP ALWAYS PAYS more than lives up to its title, playing more like an extended version of a Kennedy two-reeler than one of Errol's. 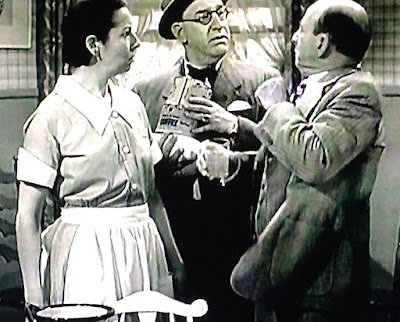 While a change of pace, POP ALWAYS PAYS is still a decent display of the man's genius even without Leon's regular shtick, providing him plenty of opportunities for impeccably timed comic denials and double takes as he weaves an increasingly tangled web of deception.  In another new wrinkle, it isn't Elisabeth Risdon or Dorothy Grainger playing Mrs. Errol this time.  Marjorie Gateson does the honors instead, with chemistry strong enough to make you wish they'd worked together more often. 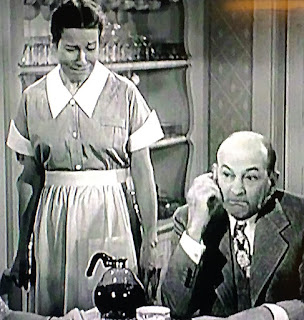 Next door neighbor Catlett manages a seemingly impossible task: stealing a scene from Errol.  To be fair, Walter is playing a truly hilarious freeloader who doesn't even have a car and has been bumming rides from Errol for a decade.  Catlett invites himself over for breakfast, "borrows" sugar and two cans of coffee, and takes full advantage of a household distraction by making off with Leon's pot roast and noodles dinner--all in the first 15 minutes.   These two old pros went way back: Catlett teamed with Errol onstage in Ziegfield's SALLY (1924) and they later reunited for the RKO vehicles HAT CHECK HONEY (1944) and RIVERBOAT RHYTHM (1946).

Catlett stays a step ahead of his old vaudeville pal, but that isn't the only running battle to maintain amusement.  Spendthrift O'Keefe also gets to indulge in double talk, usually directed at nemesis Tom Kennedy, a repo man who almost manages to seize the young man's vehicle multiple times.  Almost, but not quite--which leaves Tom sputtering and fuming nearly as much as his slow-burning namesake Edgar.

The former Bud Flanagan was three years into his career as O'Keefe, but Adele Pearce would become much better known after changing her screen name to Pamela Blake a year later.  They're fine, but no match for the vaudeville vets.  Mercury player Erskine Sanford was making only his second film appearance at age 55; the next year, he appeared in the first of his five films for Orson Welles, CITIZEN KANE.  Frank Faylen (DOBIE GILLIS), Walter Sande, Vivien Oakland and Lester Dorr are among those who pop up uncredited.

Speaking of uncredited contributions, writer Roberts reportedly relieved Goodwins in the director's chair when the latter fell ill during filming.  Both collaborated with Errol dozens of times during the star's RKO run and the three men were responsible for numerous two-reelers that provided several solidly funny moments in eighteen minutes.  With POP ALWAYS PAYS, they manage to sustain a similar ratio of laughs per minute for just under quadruple the running time. 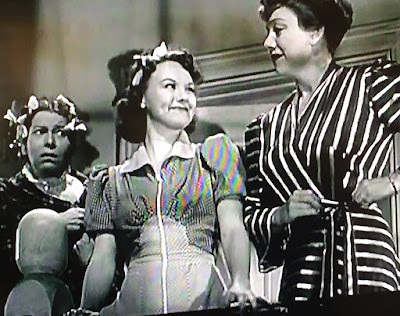 As mentioned, we need all the Leon Errol we can get on home video.  His 98 RKO shorts (rarely aired these days) sadly lack a proper release, with only about a dozen available courtesy VCI.  While we did get the MEXICAN SPITFIRE collection out a few years back from Warner Archive, that still leaves plenty of Leon's best in limbo.

Without the customary boozing and marital misunderstandings, POP ALWAYS PAYS avoids the repetition that plagued the Errol shorts from time to time.  While no classic, it is a fun way to spend an hour.  It aired on TCM in November and is worth DVR'ing if and when it returns.

The introduction to our Leon Errol Salute series is at this link.
Posted by Hal at 7:00 AM

Errol is great. Can't wait to get my hands on this one.