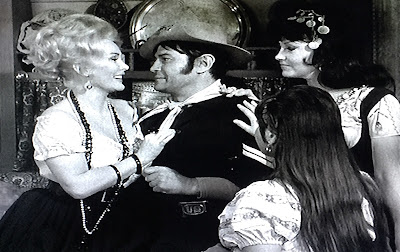 This week's F TROOP Fridays entry is in memory of the episode's Special Guest Star: the late Zsa Zsa Gabor, who passed away from a heart attack last Sunday at age 99.  R.I.P.


Captain Parmenter receives word that a wagon has been separated from its train in hostile Indian territory.  Sgt. O'Rourke is ordered to take a four man detail to search for it, leaving Vice President Agarn temporarily in charge of O'Rourke Enterprises.  With added incentive from the new "employee profit-sharing program", Agarn goes to talk business with Wild Eagle and Crazy Cat. 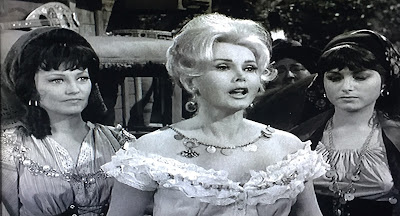 During the ensuing powwow, that missing wagon turns up at the Hekawi camp, carrying three singing Gypsy sisters: Marika, Tanya and Sonya.  Eager to make his mark as acting President, Agarn arranges Fort Courage protection for the Hungarian ladies and negotiates a 50/50 split with leader Marika on sales of souvenirs, palm readings and goulash. 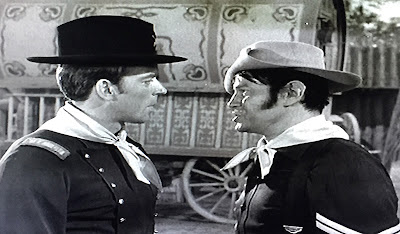 The Captain soon regrets this decision, with Hoffenmueller soon sporting earrings on sentry duty and Dobbs playing Reveille on the mandolin.  Once Parmenter informs him that the ladies have worn out their welcome, Agarn settles up--and finds himself identified by Marika as Prince Igor: the long lost successor to Laszlo, King of Hungary.  Since that's a higher rank than Corporal or Vice President, Agarn is ready to leave the fort behind.  Then Janie receives new information via telegraph indicating the "lost wagon" wasn't lost after all. 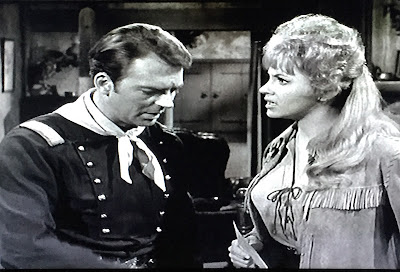 What if Corporal Randolph Agarn were running his own business?  Play, Gypsy, Play explores this hypothetical for the first time, and much like a backup quarterback who is exposed after the league gets some tape on him, Randolph gets off to a solid start but can't sustain it. 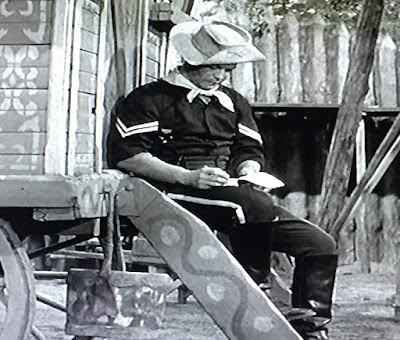 For awhile, though, Agarn sure does his due diligence: seeing the possibilities of business with the gypsies, negotiating a fair deal, adeptly getting the Captain's approval and carefully tracking all sales to ensure that shifty Marika doesn't cheat him.  Entering Act Two, it's as if the Sarge never left.  The first crack in the Corporal's armor is his inability to prevent Parmenter from ordering the gravy train to leave, but Agarn nevertheless collects $22 in profits before the policy change.  All in all, we still appear to have a strong depth chart at O'Rourke Enterprises. 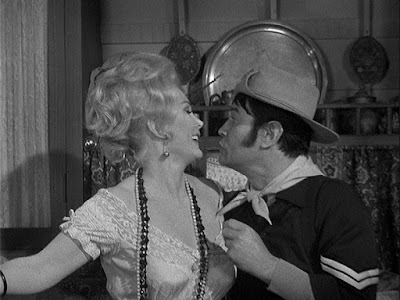 The Corporal unravels.  Surprisingly,he's done in not so much by Marika's charm, but from his own greed.  The thought of receiving his weight in gold seems to have even more sway than the power of a kingdom ("Mine, you hear?  All mine!") with the marriage to a beautiful Romani girl appearing to be a distant third.  Agarn is so preoccupied with his impending riches, he even lets Parmenter snooker him out of his earnings before Marika can!   If Wilton Parmenter is putting one over on you, well---hey, some guys are VICE President for a reason. 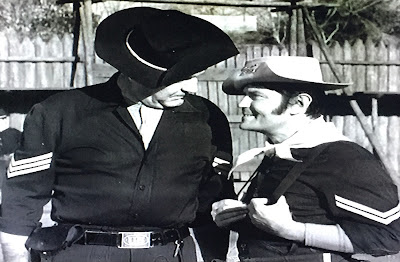 Once her fair complexion and blonde hair is properly lampshaded ("We're from the northern part of Hungary, dahling!"), Zsa Zsa Gabor's Marika proves to be quite a formidable conwoman.  She doesn't even split with her sisters, and both are puzzled at her willingness to accept a 50/50 division with Agarn.  But Marika is thinking ahead, and she ends up having the last laugh, getting away from Fort Courage with her half of the profits intact.  It's the sisters' fourth consecutive success story at a military outpost. 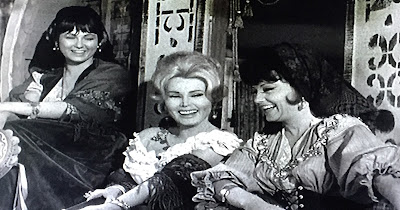 So, does Zsa Zsa's Marika surpass Lily O'Reilly and happy go lucky widow Hermoine Gooderly as the best female adversary to visit Fort Courage?  Maybe, maybe not.  Despite her success here, it's undeniable that facing the second stringer made her task far easier.  Since O'Rourke was immune to the charms of the other two, it seems likely the Sarge could have resisted Maygarian wiles also. 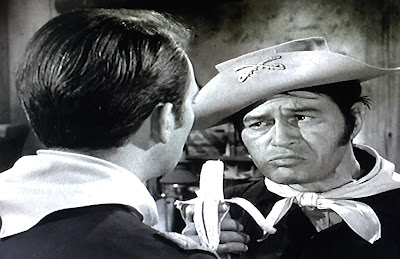 Then again, O'Rourke re-emerges in the tag with a "new" line of souvenirs he found on his travels that had already saturated the Fort Courage market in his absence.  Better hope for some tourists who have yet to encounter that nomadic wagon, Sergeant! 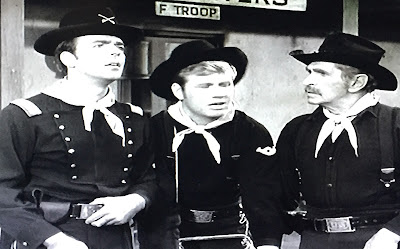 Forrest Tucker has barely a minute of screen time in Play, Gypsy, Play.  The reason for Tuck's extremely limited participation?  Filming took place during the Bing Crosby Pro-Am at Pebble Beach (January 20-23, 1966), a tournament that the longtime Lakeside member (and 1947 Frank Borzage champ) had his own furlough approved for.  (Trivia: Texan Don Massengale was the winner, his first PGA title.)

Speaking of champions, two former beauty pageant winners are visiting Fort Courage this segment, with glamorous Miss Hungary of 1936 Gabor overshadowing 1952 Miss USA Jackie Loughery.  Play, Gypsy, Play was Loughery's penultimate performance: after a 1969 guest appearance on MARCUS WELBY, M.D. she retired from the screen.  Ms. Loughery only has a few lines here: for much more of her (she turns 87 next April), check out these two appearances of hers on LOVE THAT BOB).  Third sister Sonya is played by Hungarian immigrant Angela Korens, who also appeared on TEMPLE HOUSTON and I SPY during her brief acting career in the mid-1960's. 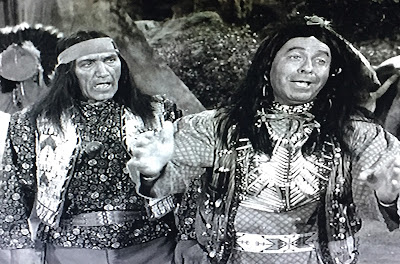 The Tuwatsi tribe is a neighbor to the Hekawis.  "Always dancing" per Chief Wild Eagle.  Despite that annoyance I'd assume they are better neighbors than the Shugs.

Continuing to demonstrate that he is a talented musician, Dobbs sounds pretty good on the mandolin.  So Private Dobbs can effectively play the flute, drums and mandolin--just not the bugle. 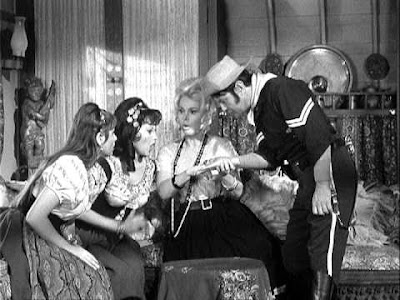 Agarn earned about two months' pay in just a few days under the profit-sharing plan before it all slipped away from him.

Not this time, all of the wisdom is Hungarian.  And plentiful, since Marika ends up doing 28 palm readings that we know of.

Zero, partly because he was barely around.   In fact, this entry was largely free of violations, though we did temporarily face a potential war with Hungary over the release of Prince Agarn/Igor from the U.S. Army. 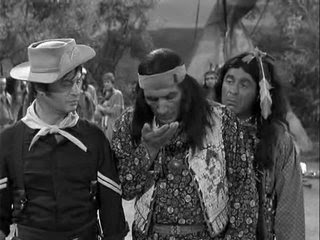 MARIKA: Chief, dahling, you want your palm read?
WILD EAGLE: (looking at it) It already is.

I guess I could nitpick and point out that the immigration of Hungarian Slovak Gypsies to the United States didn't start until about 20 years after the Civil War, but why bother?  Play, Gypsy, Play is a very amusing and sometimes surprising look at Randolph in charge, with Zsa Zsa Gabor's larger than life persona fitting in perfectly for a Fort Courage visit.  Arthur Julian's sharp dialogue helps Storch and Berry a great deal as they capably shoulder the comedic load in Forrest Tucker's absence.   (***1/2 out of four)
Posted by Hal at 12:00 AM

Great to learn that, I guess the person who did is a different Angela Korens. Happy for your sister's contribution to my favorite TV series!