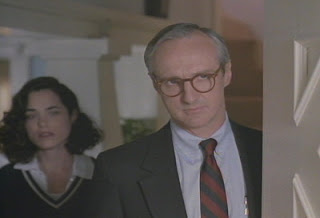 Vanilla Ice plays a mysterious rapper/dancer/motorcyclist who, while out on a ride with his posse, spots Minter riding in a pasture and decides to impress her by jumping the fence (and scaring the shit out of her horse).  Despite this inauspicious beginning, he gets another chance as his gang gets stranded in the next town needing cycle repairs, coincidentally on Minter's block, where the young lovely stays with her secretive and overprotective father Gross.  Ice proceeds to show the yokels how it's done, "it" being rapping, dancing, cycling, bonding with Minter's bird-flipping little brother and sweeping the young lovely off her feet within a matter of hours.  Oh, and solving the youngster's eventual kidnapping and opening a can of whoopass on Minter's ex and the dirty former cops out to settle an old score with Gross.

Despite the fact that absolutely no one went to see it during its brief theatrical run, COOL AS ICE achieved Legendary Bad Movie status practically overnight.  Sure, Vanilla Ice backlash had something to do with it, but that doesn't fully explain a Razzie nomination in almost every category in 1991: high "praise" in a year with competition from NOTHING BUT TROUBLE, HUDSON HAWK, ANOTHER YOU and RETURN TO THE BLUE LAGOON.  Supposedly Vanilla Ice's starring debut was intended as an updated REBEL WITHOUT A CAUSE, but COOL AS ICE has next to nothing in common plotwise or themewise with the James Dean classic.  For example, we never meet, or learn anything about, Ice's parents here, while the need for stronger guidance from his weak father was the major CAUSE of Dean's REBELliousness.  There are, however, shades--very, very faint shades--of that other 1950's youth classic, THE WILD ONE.  At least Ice is the leader of a motorcycle gang and intimidates a good portion of Unnamed Small Town, U.S.A. 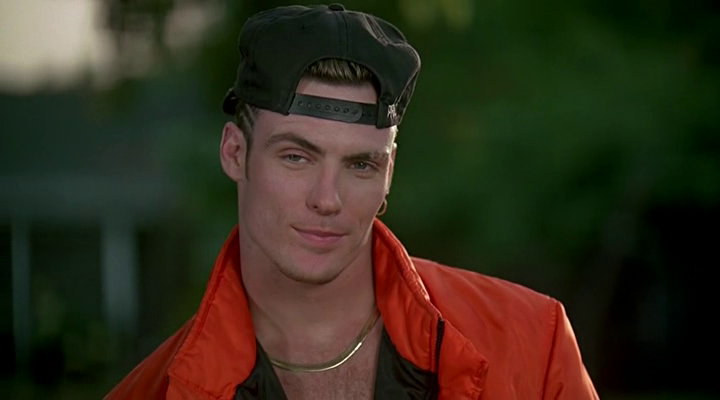 David Kellogg's resume contains lots of music videos and commercials, but only one other feature film, and watching his work here it's easy to see why.  COOL AS ICE seems largely comprised of music videos that might have made rotation at MTV if Ice's 15 minutes hadn't already been up. Padded even at 91 minutes, Kellogg's film begins and ends with two such clips, with the opening credits taking 6 1/2 minutes(!) over visuals reminiscent of C+C Music Factory, featuring a very young Naomi Campbell channeling Zelma Davis (or, if you're a purist, Martha Wash) and erstwhile "Cherry Pie" video vixen Bobbie Brown.

To be fair, it would be hard for any filmmaker to make much out of David Stenn's poorly written script.  Ice's character is sketchy at best, and virtually all supporting characters are cardboard and one-dimensional.  For example, the members of Ice's group (Deezer, Hicks and COMING TO AMERICA'S Dean) are given no distinctive personality traits at all, existing solely for reaction shots of awe at whatever cool, unconventional action Ice is taking.  The film is also short on logic, with a man in witness protection consenting to a televised interview and the (literally) 45 second transformation of Minter from ice queen to Ice's Queen, which only took one "Drop that Zero and Get with the Hero!". 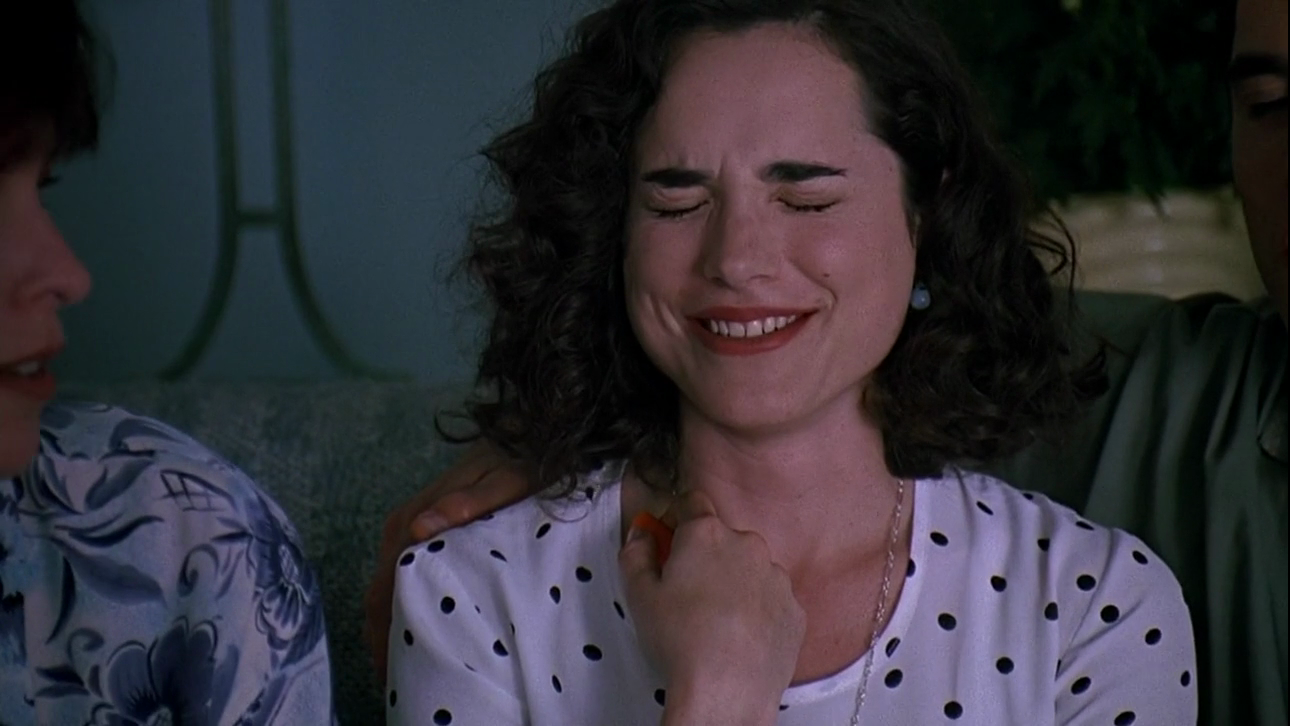 But, hey, you already knew all this about COOL AS ICE.  You watch it because you love bad movies, and Ice's one-liners, Seagal-worthy fighting abilities and rampless motorcycle jumps provide plenty of cheese.  Problem is, ICE lacks the rewatchability of SHOWGIRLS or LISTEN TO ME.  Despite the short running time there's a lot of tedium to sit through to get to the unintentional hilarity (only two very brief and unconvincing fight scenes, for example) and COOL AS ICE is best taken in small doses.  Taken all at once, you're likely to be reaching for the remote or nodding off by the half hour mark.

Like The Village People a decade before him (CAN'T STOP THE MUSIC), Ice was already passe by the time his feature debut was released. COOL AS ICE limped onto less than 400 screens in October 1991 and was only tracked by its studio for a mere two weeks.  A quickie cash grab that just wasn't quick enough.

As stated above, not that rewatchable.  It took me 17 years to revisit it, and I can easily think of a half-dozen bad movies from the early 1990's alone I'd rather watch.

It may not be my cup of tea, but COOL AS ICE definitely has a following, with bad movie lovers in Austin and Cleveland putting it back on the big screen (for one night showings) within the last month alone.  Hell, it probably grossed more in those two nights than it did during the original release.

"Drop that zero and get with the Hero!" Need I say more? It's still pretty amazing that a film with that limited a theatrical release has an instantly recognizable one liner nearly two decades later. To be fair, the line is probably remembered largely because it arrives about 8 minutes into the actual film....or about two minutes before most people are reaching for the remote.

In the midst of amateurish writing, acting and directing, the film does boast excellent cinematography, by future Oscar winner Janusz Kaminski.  No kidding!
Posted by Hal at 12:27 AM

I remember coming across a Laserdisc of this a couple of years ago. Amazing!

Hal, don't you know prolonged exposure to Vanilla Ice is dangerous? When Quincy does your autopsy, he'll proclaim, "This was no suicide. This man was murrrdered, murrrdered by white-boy poseur hip-hop!"

I watched this during my dark days as an assistant manager at Blockbuster. Once I'd watched everything in the store, I reluctantly impaled myself on this movie. Pure pain. Makes the "Adventures of Ford Fairlane" look like "Shaft."

I agree about this movie's complete absence of rewatchability. It's not so-bad-it's-good. It's just bad. Paper-cut bad. Good post, though.

Oh, man, Frost, I can only imagine having this, and only this, as a fresh viewing option. At least you didn't have to chance being seen walking out of the store with it. :)

The Vanilla Ice "era" did give us one shining moment, though. The Jim Carrey parody on IN LIVING COLOR is still hilarious and probably as well remembered as the original video today.

It is a shame the Big Q was off the air by this time, but given the timeliness of the Punk Rock episode we can assume it would have been 1995 or so before they'd have gotten around to commenting on Vanilla Ice.