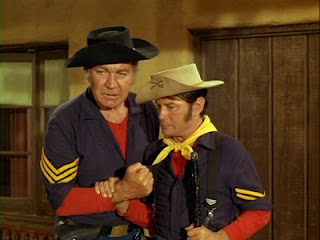 A little birthday salute with illustrations is in order, wouldn't you think? 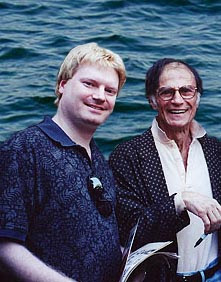 At right, yours truly meeting the legend himself backstage at Fair Park Music Hall in Dallas, TX after the August 6, 2000 performance of ANNIE GET YOUR GUN. Yes, Marilu Henner played Annie and was also backstage, but I didn't get a picture with her. Come on, folks, I know she's great too, but there are priorities! Besides, the man himself hadn't hit the Dallas stage in a decade at the time: his last trip through had been with ARSENIC AND OLD LACE during the late 1980's. 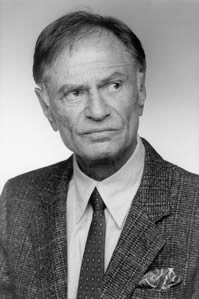 ANNIE GET YOUR GUN was Storch's first Broadway and national stage production of the century, but far from his last: he also co-starred in SOME LIKE IT HOT (national, at left) in 2003 and SLY FOX (Broadway) in 2004. The latter role was an astounding 46 years after Larry's first co-starring role on the Great White Way, 1958's WHO WAS THAT LADY?

Man, were those people at Harrah's lucky or what? The two greatest actors who ever lived, Storch and Forrest Tucker at the height of their TV fame doing a live performance with F TROOP co-star Ken Berry in April 1967. No doubt the gambling came to a sudden halt for an hour every night. 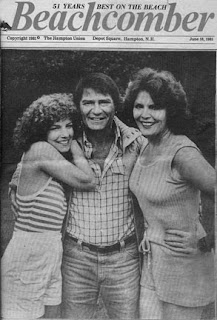 Not just a comedian, but also rather smooth with the ladies too, as evidenced by no fewer than 5 appearances on LOVE, AMERICAN STYLE and 3 on THE LOVE BOAT. He was also a particular favorite on FANTASY ISLAND, and played a ladies' man who had Archie Bunker worrying about his own fading virility in a memorable 1973 episode of ALL IN THE FAMILY. Yes, folks, "Storch" and "Macking" were synonymous on TV during the freewheeling Me Decade. 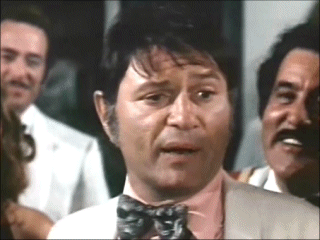 So, let us all gather around and toast one of the all time greats on the happy occasion of his 87th birthday! Happy Birthday Mr. Storch, and we're all looking forward to that autobiography and documentary film ("Who Sez I'm Dead?" is the title).

Larry's MySpace has a lot of cool video links and the latest news on a true American legend.

But it is missing Larry's appearance in THE ARISTOCRATS (2005), which I can't resist closing our tribute with.  Don't watch it at work though--there's a reason it isn't on the family friendly MySpace page.

My childhood (and the world) wouldn't have been the same without the mugging and macking of The Storch.

I'm envious that you got to be in The Presence.

Storchy and the Klug-Man in a sitcom? Sign me up for weekly viewing!

I have to say that while I have met several celebrities over the years, meeting Storch was the one time I was kinda tongue-tied. I mean, I was in awe, really. He asked me where I found the photo I had and I all I could say was, "at a card show!". Surely I could have rehearsed and been chattier. I spoke up a little after the first minute though.