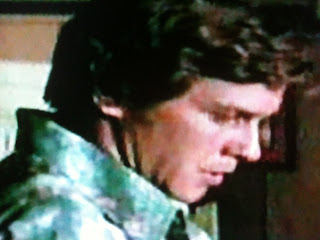 
Matheson is a bowling whiz in his small midwestern town who dreams of winning that one big tournament and joining the PBA.   Former pro Warden co-owns the bowling alley Matheson works at, mentoring and living vicariously through the young talent, while the Dreamer's lady Blakely grows frustrated "competing with bowling".  There are choices to make all around when Matheson has the goal in sight at the tour's Chicago stop, with just one problem--legendary Hall of Famer Weber is the opponent standing in his way. 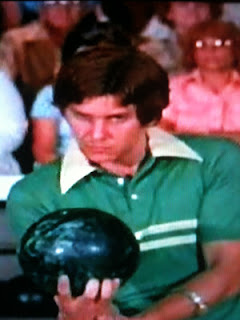 The 1970's was something of a Golden Age for the sports movie.  In that decade's latter half, most tended to fall into one of two categories.  The makers either embraced profanity and other R-rated content a la THE BAD NEWS BEARS (FAST BREAK and SLAP SHOT come to mind) or went the safer, more innocuous, straightforward "feel good" route of BREAKING AWAY and ROCKY.  Since ROCKY's Bill Conti does the soundtrack and the film is rated PG (no "tempations of the road" for this bowler) it's easy to see Nosseck is taking the latter route with DREAMER. 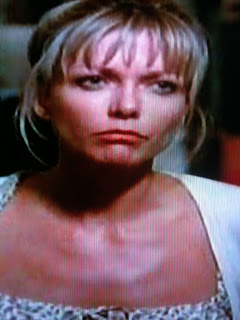 Somewhat distinguished by virtue of being one of the few theatrical films to center on the PBA (are there any others besides KINGPIN?), DREAMER offers few new wrinkles otherwise.  The conflicts are too minor (Matheson vs. the PBA establishment, Blakely vs. Warden for Matheson's time) in the script by Larry Bischof and James Proctor.  In addition, they leave a 7-10 split with Warden's arc, which is manipulative, cliched as Hell and removes the most intriguing character from the action too soon.  Maybe they thought Matheson's thumb injury just wasn't enough to convince us that bowling is tough, strenuous exercise, I dunno. 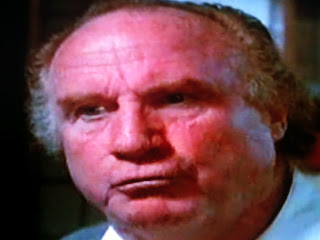 As one might guess from that and other plot twists, DREAMER follows the sports film template without surprises, other than Blakely's girlfriend not being the "wet blanket" type when it comes to bowling.  On the contrary, she works at the same alley and would love to accompany Matheson to the tournaments, but "the guys" think she affects his focus negatively.  Well, either that or she's just bad luck.  The romantic pairing doesn't really click like it should; Matheson comes across as indifferent to her, and the pair being "brought together" by a tragedy seems as artificial as the demise itself. 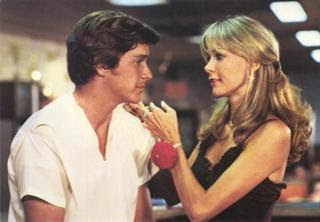 Several interesting minor roles (Clark's "Spider", Small's waitress) leave you wanting more.  One of those intriguing characters livens DREAMER up halfway through, as June 1975 Playmate of the Month Azizi Johari (THE KILLING OF A CHINESE BOOKIE) shows up at the alley as a pool hustler, looking stunning and offering an intriguing bet to would-be womanizer Clark, who has trouble keeping his jaw off the ground.  So did I:

Johari is barely onscreen for five minutes, but you can't take your eyes off her.  Too brief, but it's the most memorable scene.  It's too bad that Nosseck keeps cutting away from the pool room.  To answer Roger Ebert's question from his review: Small updates us on the match in the next scene, and it's safe to say that Spider kept losing.  After all, if he'd won, he'd be way too busy to be bothering Blakely about two hours later. 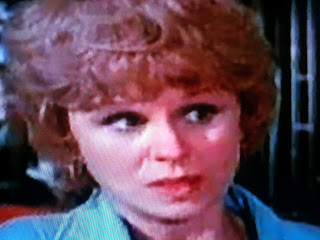 Also sticking in your head afterward ("Reach for the top/I won't stop/Gonna shoot my shot...") is Pablo Cruise's theme song, though not in nearly as good a way.  It's good to see Matheson in what would turn out to be a rare lead (after his ANIMAL HOUSE success) but, with Warden given little to do, this is one of the few films he can't help, though he could certainly spice things up if he had the R-rating to work with.  Hard to fault a sports film for being predictable, and that isn't what sinks DREAMER: blandness is.  Still worth a gander for its cast and a subject that is rarely explored cinematically.  Just don't expect to learn much more about bowling than Warden's advice: "You gotta beat the pins, not the man." 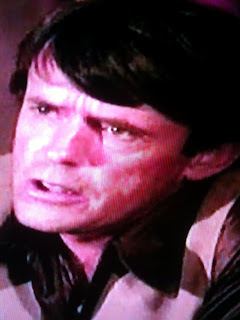 DREAMER did have a limited but unsuccessful theatrical run in the Spring of 1979 (contrary to Wikipedia's entry).  Passably written and directed at best and only scratching the surface of the sport's nuances, DREAMER failed to satisfy aficionados, casual bowlers or sports movie fans in its short stint.

Bland as DREAMER is, PBA fans might appreciate, since there are very few non-comedies exploring the sport.  Fans of the two leads might like this as well, but otherwise, the rare appearance by Azizi Johari (who only made four features, all between 1976 and 1981) is the main reason to tune in. 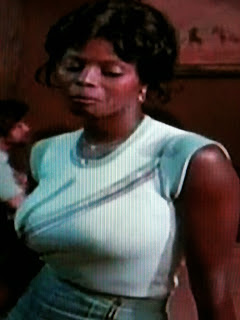 DREAMER airs occasionally on Fox Movie Channel.  If you'd like to check it out for yourself, it's scheduled next for May 21st at 11:25 A.M.
Posted by Hal at 7:43 AM

Yes! I totally remember seeing this on Showtime when I was a kid! And what happens to Jack Warden's character!