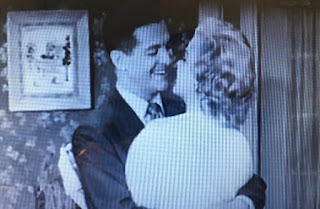 
Introduction to the LOVE THAT BOB/THE BOB CUMMINGS SHOW episode guide is at this link.

It's the eve of boot camp for Chuck, Jimmy and Joe. With two weeks in Idaho for Air National Guard training, Margaret has consented to host a farewell party.  It's the least she can do: fourteen days out of state with no dancing, dates or girls will follow.  But there's a catch: Chuck's mother insists that an adult chaperone be present at all times. 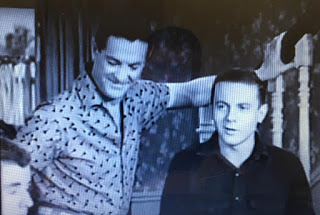 "Jimmy, dial, and watch how you can turn a lowly potato into a lovely tomato!"

Party's over, right?  What grownup knows how to have fun?  That's easy--the same Colonel Collins who persuaded the boys to join that ANG in the first place.  Uncle Bob is willing to twist boot camp into Supersonic Propulsion Underground Detail (a.k.a. S.P.U.D.) in order to make sure none of the trio will go dateless that night, but he draws the line at attending the farewell since he has a 7:00 date with angel Bonita.  Bob is eventually worn down, seemingly assuring the guys of "a ball" instead of a dance party.  Until their Hero learns the reason his presence is so fervently requested. 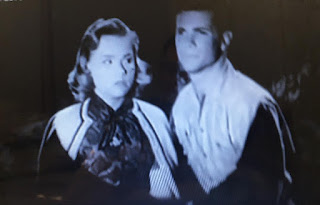 "Distribute her back in the house.  Everybody dance!"

Life comes at you fast: three short months after The Fallen Idol saw Chuck's friends far more interested in Bob's help building a model plane, the boys seek The King's help in more carnal pursuits in Bob the Chaperone.  Colonel Collins gladly helps little Jimmy Lloyd secure a suitable (read: vertically challenged) date for their last night before boot camp and gives them good Alpha advice before the big evening.  But the playboy shutterbug draws the line at providing the permissive atmosphere needed for the lads to become men that same night--particularly after he learns the buttering boys anticipate a very soft touch from their adult supervision. 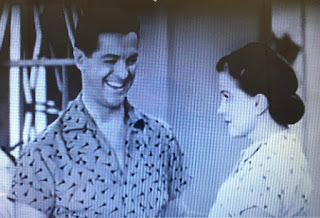 It's surprisingly a bit of a blow to the Collins ego: witness his expression when Margaret breaks the news, despite the big kick that date Bonita gets out of the scheme.  The airman becomes seemingly omniscient, unwilling to let Joe find that empty spot at Mulholland for example.  Hey, who is better qualified to sniff out every potential makeout spot on the property?   The cheapest (and arguably biggest) laughs come from hapless Jimmy Lloyd's attempted liaisons--suffice to say he should have been happy getting the date, considering her excuses for not accepting prior to the Colonel's intervention. 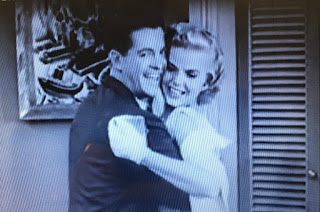 With all of the action confined to the Collins/MacDonald household this time, Schultzy is MIA, but we are not without eye candy, courtesy Barbara Lang as Bob's aptly-named date Bonita.  Diane Jergens makes her final appearance as Chuck's girlfriend Francine: she was replaced by Olive Sturgess as Carol Henning the following fall. 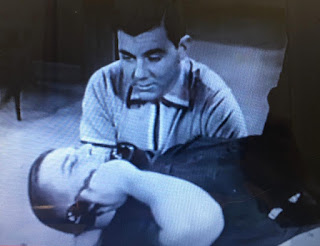 The penultimate installment of the show's second season, Bob the Chaperone finds Rod Amateau in fine form with a script giving him lots of leeway for sight gags.   We're still quite a ways from youth being served, with middle-aged Bob Collins still held in absolute awe by Chuck and his friends despite their disappointment in the tight ship he runs during their bon voyage bash.  True, to modern eyes the ladies are a little gullible on that S.P.U.D. detail, but at least some seem eager to play along to have an excuse to let the boys on the basepaths.  It's easy to tell Levi's helped sponsor this episode--listen for the number of mentions.  Not quite enough for a drinking game, but they got their money's worth. 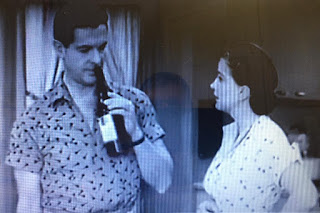 Bob, and only Bob!  The novel twist sees our lascivious Lothario ensuring that Chuck, Joe and Jimmy all keep right on dancing everywhere but in the sheets.  As for Bobby boy getting blocked,
with Schultzy absent, no one stops our playboy until Margaret's (surprisingly accidental) intrusion.  Better go back to your regular Mulholland spot, Colonel. 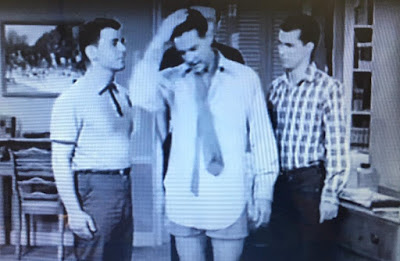 The angel Bob picks up at 7:00 is Barbara Lang, so memorable as his would-be conquest in Bob Plays Margaret's Game.  For sure, he gets closer to home plate here than he did there.  I liked his chances at the fade-out, anyway--the party for the new recruits was over, but the Colonel's night was just beginning. 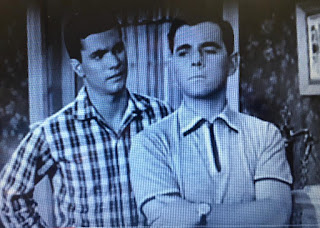 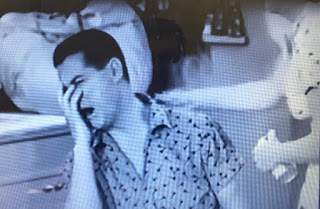 Want to see Bob the Chaperone for yourself?  Have at it:

I see there's a character named Joseph DePew. A nod to the real DePew, who was an editor on this show, and later a writer-producer on Beverly Hillbillies?

Hi Hobbyfan. Yes, correct. In-jokes were rampant on this show; the DePew character was a semi-regular during the second season.