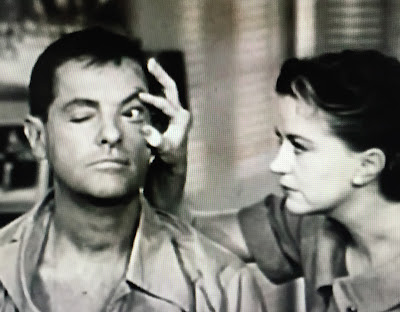 When you're swanky, sophisticated man about town Bob Collins, you can sometimes be too sought-after for your own good.  Case in point: the arrival of two corsages tips Bob off that he's double-booked himself for dates with Julie and (unseen) Pamela for Friday the 9th.  Sister Margaret balks at Bob's initial back-up plan, which is to ease one of his dates over to Margaret's planned date for the evening--"that wolf" Paul Fonda. 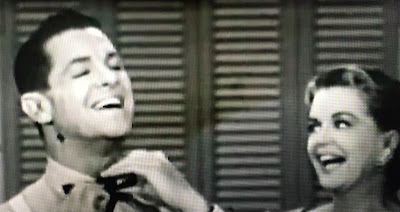 An impossible choice between two beautiful models: all guys should have such troubles, eh?  But our ace photographer has more complicating factors: an early Saturday shoot with swimsuit model Sylvia, and nephew Chuck's promises to his friends that his "rough, tough fighter pilot" of an Uncle will help them build a model plane for a contest.  When busy Bob can't do it, they become fonder of Fonda, and Bob becomes the titular fallen idol inside his home.  Outside it too, once Julie realizes she isn't the playboy shutterbug's only girl.

From the still-formative second season of THE BOB CUMMINGS SHOW, The Fallen Idol provides many notable contrasts with the wilder and faster-paced 1957-59 episodes which are more readily available on DVD today.  For starters, older sister Margaret is much more tolerant of Bob's playboy ways than she would become.  She's also gentler in her attempts to awaken him after a night of carousing, and doesn't even assist her son and his pals as they beseech Air Force Colonel Collins for help with their project. 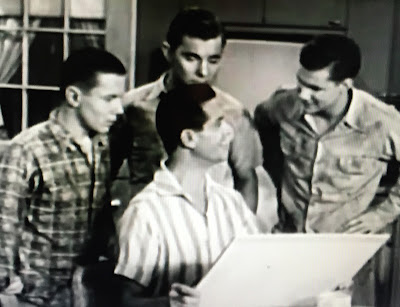 Amazingly, Margaret even shrugs off Bob's blatantly stated attempt to pull a switcheroo that would jeopardize her Friday night date with his old war buddy Paul Fonda, and only mildly protests her brother's (hypocritical, no?) characterization of Fonda as a wolf.  Margaret's objections would accrue an edge in segments to come (notably in Bob Plays Margaret's Game), but her only protest here is a weak sabotage of the lines thrown out by the real Wolf of Mulholland during his telephone calls to the ladies he is juggling. 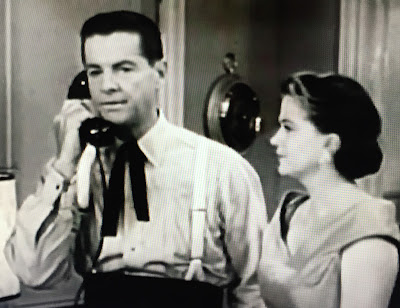 With Chuck still a high schooler, he isn't yet trying to horn in on his popular Uncle's Friday night action.  Young MacDonald is far too awed by Uncle Bob to even think about it, hyping his WW2 achievements to buddies Joe Depew (named, of course for the show's assistant director who would go on to helm nearly 150 BEVERLY HILLBILLIES episodes for Henning) and Jimmy Lloyd.  The lads are far more interested in building a model plane on Friday night (for a contest, to be fair) than chasing girls at this stage, so Margaret isn't nearly as concerned about Uncle Bob's bad influence as she would become barely a year later (Bob Gets Out-Uncled).  Chuck is genuinely crushed when Bob's double dating duty renders him AWOL when it is time to construct their entry.

Not that you won't recognize THE BOB CUMMINGS SHOW at this early stage; helmed capably by Rod Amateau, it is already one of the few truly subversive shows of its era.  Bob Collins keeps both dates, with his nocturnal activities not only affecting his home life (he skips out on Margaret's pleas to assist with carport planning in addition to stiffing the nephew who idolizes him) but also his job, since he is late for his Saturday shoot.  Once he's there, even the stunning Sylvia can't keep him awake. 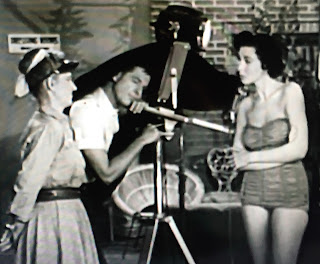 Must have been one Hell of a Friday night!


But does Uncle Bob pay for his transgressions?  Negatory.  All he needs is a Saturday afternoon nap, and he's ready to correct the well-meaning Paul Fonda's mistakes on the inanimate model and his own on the human model--Julie, at least.  (We never follow up with "pudgy" Patricia the day after.)  By the end of the episode, the "fallen idol" has risen again.  Chuck is rewarded for his loyalty and has saved face with his friends: both are completely won over by finally witnessing Colonel Collins' expertise.  His newfound standing is only enhanced when the fellows meet Julie, the reason Bob couldn't help them the night before.


Later installments like Colonel Goldbrick hinted at the following decade's youth revolution, but Bob Collins is still the cat's meow in The Fallen Idol.   Paul Fonda is quickly supplanted by episode's end, and the high schoolers drool over Uncle Bob's date for the evening, but defer to their new hero and get lost when Julie shows up.  Julie, meanwhile, is impressed by Bob's "dedication to his family" after a chance to think it over.  So the redemption is somewhat genuine, but still, for a 1950's TV show, Bob Collins was getting away with a lot of transgressions against society norms without much comeuppance, even at this early stage for the show.   With he and Julie presumably headed up to Mulholland (she likes the sweaty, greasy mechanic look) Bob may well be looking like this again on Sunday morning: 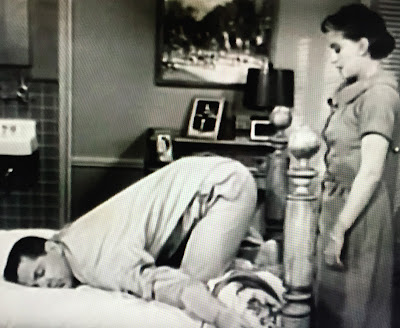 Sylvia Lewis later choreographed sitcoms into the late 1980's (MARRIED...WITH CHILDREN) and would figure prominently in this episode's semi-sequel, The Wolf Who Came to Dinner.  Elaine Edwards is best known for horror films of the era, most notably THE CURSE OF THE FACELESS MAN and THE BAT. 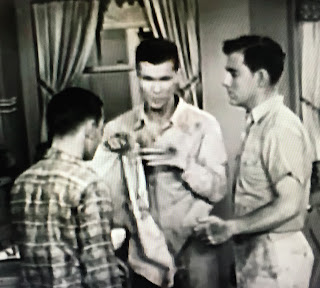 No one, really, which would be all but unheard of in later segments.  Margaret's feeble effort and Paul Fonda's disinterest in stopping Colonel Collins are both eyebrow raisers, and even Schultzy doesn't try to interfere with Bob's nocturnal activities for once.  The super-assistant is even benign about doing all the work on a Saturday.  Yep, for once Bob is actually penetrating the blockers' version of a prevent defense.

We don't hear much about his Thursday date with Shirley Swanson (unseen this time, unfortunately), and there are mixed signals concerning Friday night.  True, Bob is dead to the world at 10 AM and stays that way, but despite this promising sign, he did end up in his own bed and Julie is mad at him.  He is also inexplicably too tired to try to make personal time with Sylvia during their shoot.  It does appear, though, that the fallen idol is literally rising again at episode's end: 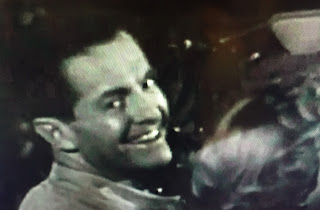 While The Fallen Idol milks the gags about Bob's morning-after lifelessness a little too much and Collins' path to redemption seems a little too easy, it's a typically amusing, if average entry.  Emmy-nominated Rod Amateau laid the foundation for Cummings' more hyper, crazy directorial style to follow, and Amateau would subsequently turn that up a notch further with his own wild work on over 100 episodes of DOBIE GILLIS.  If The Fallen Idol is indicative of this show's "B" game, well, LOVE THAT BOB's B game is still pretty damn funny.  (**1/2 out of four)

The Fallen Idol is available for viewing on YouTube, titled as "My Uncle Bob".
It is also available on DVD under that title at Shokus Home Video.