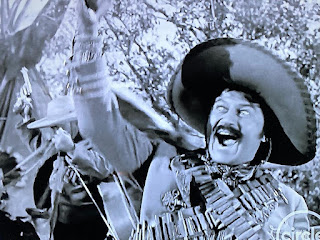 While the troop is going through annual physical exams, word breaks that the Mexican bandit El Diablo has been spotted in the area.  The news puts everyone on edge, but especially our Corporal: El Diablo's real name is Pancho Agarnato and he's Agarn's cousin from south of the border. 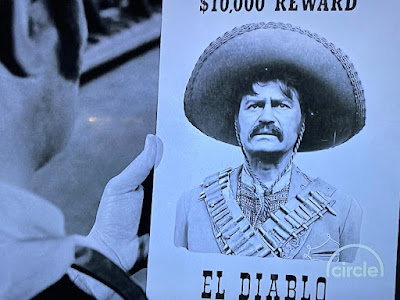 Will Agarn face scorn from the family for turning his cousin in?  Quite the contrary--even Pancho's sister thinks he's a bad seed.  The Captain reluctantly grants his Corporal permission to hunt El Diablo down and clear the family name.  You guessed it: shortly after Randolph departs, his Mexican relative arrives--taking Parmenter, Jane, Dobbs and the Sarge hostage in the Fort Courage saloon. 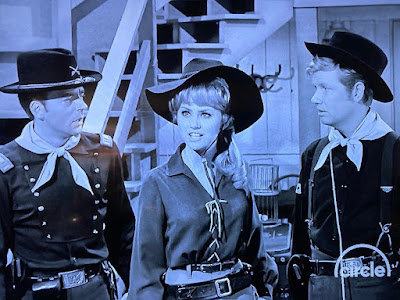 One of the most popular and quotable F TROOP installments is the first of three that would feature a second Storch.  Well, scratch that--El Diablo pulls out all the stops by giving us Storch in quintuplet, with Granny Agarn, Uncle Gaylord Agarn and the aforementioned Rosita Agarnato joining the titular cousin in this supreme showcase for the show's gravy comedian. 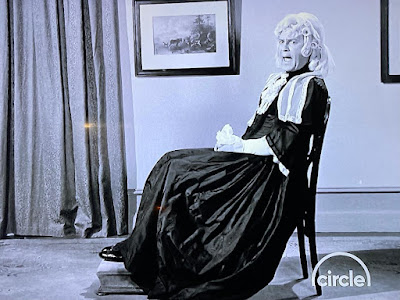 Storch gets mere seconds to essay the first three relatives but Pancho Agarnato sets the tone for later alter egos by getting the majority of the actor's screen time in El Diablo.  Storch slices slightly less ham as Pancho than as Randolph (it's close) and the master of dialects has improved this one considerably in the seven years since GUN FEVER.  Hell, he's more menacing here than as Amigo in that 1958 flick (which is still worth checking out, BTW).  The crazy seems calculated to intimidate, and succeeds--El Diablo certainly has the edge on The Scourge of the West, thwarting almost every attempt to get the drop on him at Fort Courage's cantina.  Pancho is also quite impressive with that revolver when he's not firing it into the air. 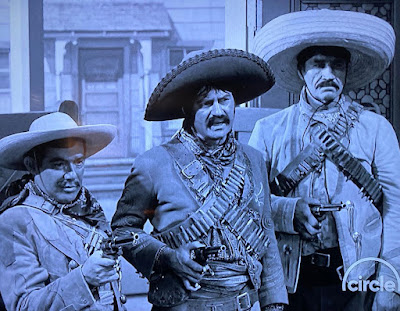 While Pancho's hard knock life seems to serve the self-described "Little Red Robin Hood" well, his genetic line is what does him in.  Yes, he's still an Agarn--and in addition to using his hat as an attention getter he also shares his cousin's hypochondria.  That's the Achilles heel that lands him in the guardhouse, with no F Trooper gullible enough to let him out.  Well, that is, except one. 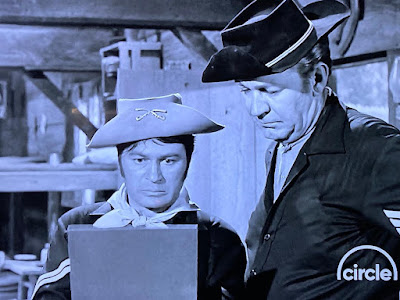 Pancho Agarnato is a real criminal, unlike the falsely accused Lucky Pierre.  But despite his life of crime, El Diablo doesn't judge him too harshly.  He's at the top of his (admittedly shady) field, nobly refuses to rob the poor (though he's inconsistent on this, since he "needs the practice"), has an entire town cowering in fear of him and (in)fame that extends into the Native American camps a thousand miles from the Mexican border.  Hell, Chief Wild Eagle laments that he's in business with the wrong cousin! 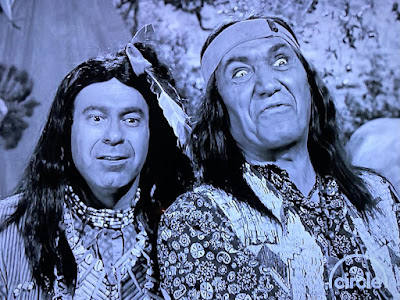 While the titular alter ego predictably looms largest, El Diablo gives us other opportunities for merriment.  Vanderbilt passes his eye test, somewhat.  Wrangler Jane makes the most of the situation, sneaking a peek at the shy, shirtless Parmenter and later enjoying a Mexican Hat Dance with her crush despite his consternation at Pancho's coercion to do it.  Between Survival of the Fittest, The Day they Shot Agarn and this one, our Corporal shows he should not be chosen for any special assignments outside the confines of the Fort. 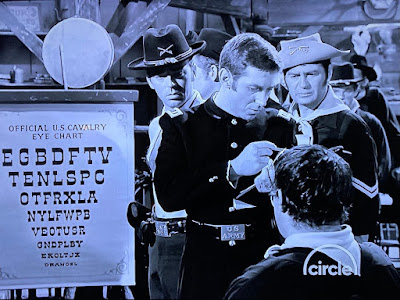 Hal England left enough of an impression as the territory's new military doctor to be invited back as the Army dentist in Our Brave in F Troop.  And yes, that is Tony Martinez of THE REAL McCOYS as Agarnato's most vocal henchman. 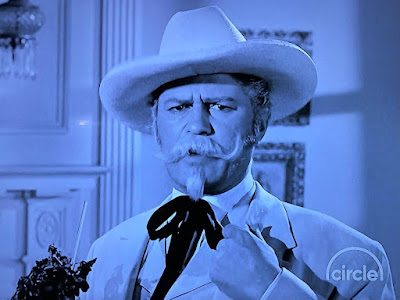 How's that $10,000 reward going to be split if/when El Diablo is turned in?  Was there a reward for his sidekicks too?  And most glaringly: why didn't the Bandito just rob the now deserted Fort Courage bank while leaving the henchmen to hold the hostages at the saloon? 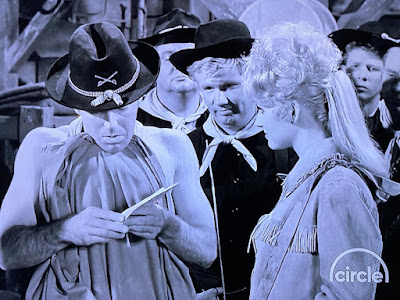 Not a good week.  First, Fort Courage is deserted once El Diablo and his entourage are spotted in the territory, with even good old Pete forgoing his salary until the crisis blows over.  Then, the banditos help themselves to food and drinks at the saloon, unknowingly doing so on O'Rourke's unwilling dime.  Perhaps a share of that $10,000 reward could soothe the wounds, but our Vice President blows that one too during the tag.

With Agarnato being the Hekawis' only visitor, this installment is free of betrayal.  Yes, even to family, since Randolph has the entire Agarn family on his side against his no-good cousin. 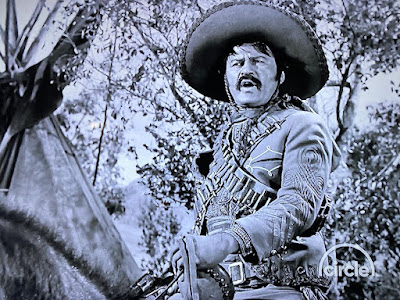 Either Rosita's unprintable opinion or Granny Agarn's reminiscence of Pancho would be enough to put El Diablo in the latter category.  For his part Pancho indulges in about as many cliches as he skewers, though he does triumph when all is said and done.

It's always a good time when Storch takes center stage, and El Diablo falls into the same category as Bye, Bye, Balloon: not quite highest tier F TROOP but justifiably very popular.  At the time of this writing it is tied as the highest rated segment over at IMDb.com and is superior to the episode it is tied with (V is for Vampire).  On its own terms, a certifiable riot.  (***1/2 out of four)

F TROOP is on hiatus presently at Circle TV, but hopefully will move back into the weekday rotation soon. It's still on their list of shows, which is a good sign.

Seems to me Storch was trying to out-do Jerry Lewis with the multiple alter-egos.

FWIW, Don Diamond (Crazy Cat), like Larry, got into the cartoon business, voicing one half of DePatie-Freleng's Tijuana/Texas Toads in the 70's (the title was changed for television as a backup feature for Pink Panther).

Very true on Diamond. And Frank de Kova's final two roles were in animation also, in HEY GOOD LOOKIN' and (I remember this one talked up quite a bit in '81) AMERICAN POP.

Did not know about Frank DeKova doing animation at the end of his career.