Sidesplittingly funny comedy written and directed (his debut) by Bergman (THE IN-LAWS) and starring Ryan O'Neal and Jack Warden (USED CARS). While not quite at the level of either (which is no indictment--we're talking about two of the greatest comedies ever made) SO FINE reminds me of both.  Like USED CARS, this film features Jack Warden at his most quotable and profane and also features a former Munster playing a key, authoritative supporting role.  And like THE IN-LAWS, this film has Andrew Bergman taking you to unexpected places from beginning to end. 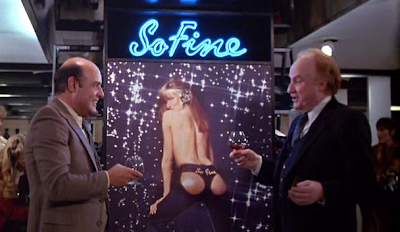 Ryan O'Neal, an experienced straight man for screwball insanity, is a professor up for tenure at his small university who is kidnapped by goons working for 7'2" loan shark Richard Kiel.  Kiel is owed six figures (seven with vigorish) by O'Neal's dad, failing dress designer Jack Warden, and wants "new blood" within Fine Fashions in the person of O'Neal, who knows nothing about the fashion biz.  To complicate matters, Kiel's trophy wife Mariangela Melato falls for Ryan at first sight, subtly letting him know this ("I f**k around") as soon as Kiel is out of earshot. 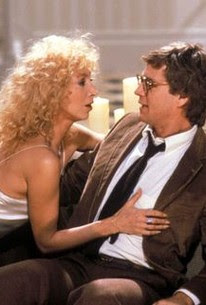 Bergman's pace keeps you from dwelling on the less plausible plot elements, and as always, he sets up numerous funny situations: O'Neal's repeated attempts to get out from under Kiel's bed without literally waking the sleeping giant; the wordless reveal of how Kiel got that huge knot on his forehead; Warden trying to steal customers inside a posh department store ("May I use a mature phrase?); Kiel's gangster making an unlikely stage debut as Otello ("the sonofabitch can sing!") and O'Neal's unexpected emergence as a fashion innovator. Just some of the highlights as Bergman updates the classic screwball comedy to a franker era while also managing to pay homage to A NIGHT AT THE OPERA, THE MERCHANT OF VENICE and OTHELLO.  Not a bad hour and a half's work. 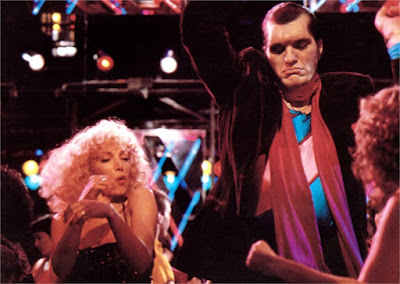 As noted above, Warden is every bit as hilarious as he'd been in USED CARS, but most of the really good lines are either his or Melato's, as opposed to Zemeckis' film, where the funniest lines were more widely distributed. And while the film is consistently funny, it does lose some steam during the too-silly opera finale ("a sudden burst of surrealism!").  Nevertheless, Kiel as a "tragic giant" Otello is a jaw dropping sight despite the hit-and-miss subtitles translating for us as he and Melato sing out their differences. 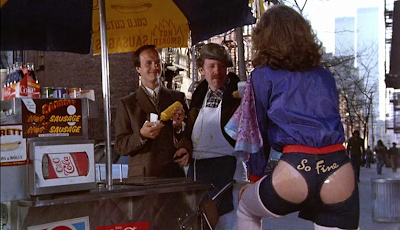 Angela Pietropinto has a good early role as Melato's confidant, Anita Morris memorably opens the So Fine commercial, and Tyra Ferrell (BOYZ N THE HOOD) makes her feature debut, briefly wearing the trendsetting jeans around the offices of Fine Fashions.

Ryan O'Neal's charmed life at the box office had come to an end by the early 1980's, and SO FINE had disappointing returns in the fall of 1981.  It's still a very underrated film, every bit as funny as Bergman's THE FRESHMAN and even a solid competitor for O'Neal's WHAT'S UP DOC?.  Highly worthy of release and rediscovery on DVD. 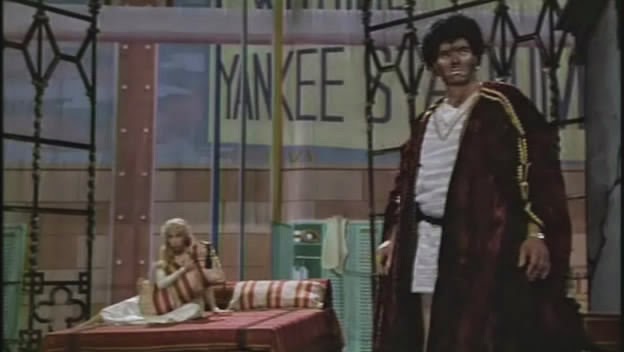 So, why isn't this on DVD yet?

Ryan O'Neal isn't the biggest name these days (MALIBU'S MOST WANTED, anyone?); the film did poorly during its initial release.

A handful of gags have aged poorly, though to be fair you could say that about most of the era's comedies. 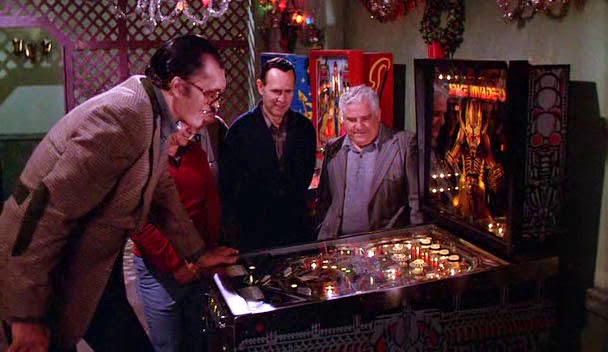 Why it should be available on DVD:

Bottom line: it's very funny despite the preposterousness.  Bergman's flair for the unexpected is in fine form, as is Jack Warden's faultless ability to tell it like it is.  And Kiel is a revelation: disco dancing, lip synching to "Walk Like a Man", and getting far more laughs than syllables.  (As verbose as he gets: "Vegas.  Then Reno.  You don't like it, tough!")

Almost all of Bergman's other films are available on DVD and this one should be too.

We saw far too little of the talented Melato in Hollywood films, and she's much better served here than in FLASH GORDON. 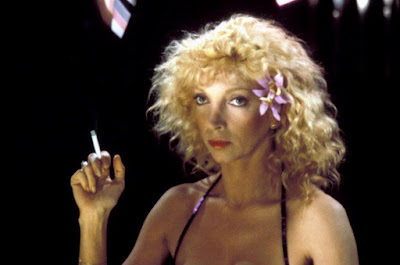 THE IN-LAWS had a terrific commentary with director, writer, and both leads available. All the principals would be available for a similar one here.

If THE DEVIL AND MAX DEVLIN, WHOLLY MOSES! and other box office bombs from the same time period are out on DVD, then this much better film deserves a release too. 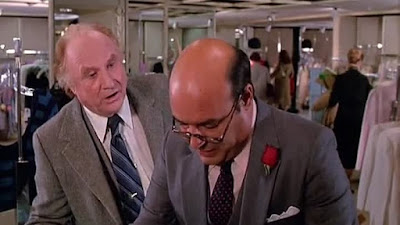 I love this movie and remember when it came out.I love the classic line by Jack Warden, when he's looking down on Ryan O'Neal, "that's just the way i used to f**k"! Keep up the good review's.

This movie is an absolute masterpiece -- the only film made in recent memory comparable to the best of preston Sturges.

You can order it on DVD direct from Warner Bros.