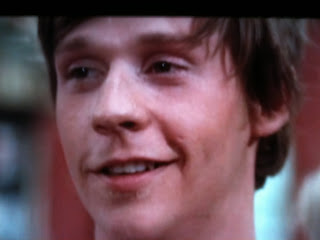 
Believing his life unfulfilled after the sudden death of his brother, Chicago nerd (and virgin) Christopher follows Horace Greeley's famous advice and ends up in Avila Beach, California to try out the surfer life that they both had always dreamed about.  He finds a place to stay and a mentor in aging Cassell, who owns the local bar and clings to his long-faded glory days of swimming in the Olympics.  Christopher's interested in learning how to fit in from the elder statesman and even more interested in making time with the ladies, particularly Cassell's daughter O'Connor.  Christopher comes to believe that Cassell isn't quite the guru that he'd like to be and that the carefree west coast lifestyle isn't as romantic as it appeared from 1,700 miles away.  Elsewhere, Roberts tries to get hedonistic boyfriend Calvin to mature and commit to her, and mechanic Wynn (who also scripted) tries to win a vintage car and the heart of a gold-digging waitress by living inside his clunker for six weeks.

With the demise of A.I.P. barely a year away, the studio that once rode the BEACH PARTY series to box office glory released a film that showed the flip side of its nonstop party 1960's films and "the surfer life".  Your first clue that CALIFORNIA DREAMING isn't going to be a BEACH BLANKET BINGO for the late 1970's arrives in the opening credits.  Hancock (BANG THE DRUM SLOWLY, BABY BLUE MARINE) is hardly the director you'd picture helming a comedy about the neverending summer.   Surprising eroticism springing from Christopher's fish-out-of-water awkwardness (i.e. the hilarious and titillating slo-mo sequence in the theatre snack bar) is reminiscient of earlier coming of age films like OUT OF IT and only the completely unlikable Calvin doesn't long for something more in his life among the locals Christopher meets.

For example, Fain's character.  A professional surfer in real life (and in his mid-30's by this time), Fain was a very familiar face in the genre who appeared in 7 of A.I.P.'s Beach series.  Fain did nothing but smile and surf in the likes of BIKINI BEACH and PAJAMA PARTY but here wishes to propose to Nelkin and open his own business, repeatedly declaring his weariness with surfing on a daily basis.  Fain later breaks his arm on the pier: the peril of facing those gnarly waves isn't ignored.


Cassell personifies the perils of not growing up.  The actor was already playing long in the tooth hipsters a decade earlier (FACES) and his "Duke" comes across as more than a little sad as he pontificates about the superiority of the "old days", manly surf boards, and volleyball as the ultimate way for Christopher to "get some ass".  Unlike the shallow Calvin (who mocks both Cassell and Fain, his supposed best friend), Cassell actually experienced sporting glory.  Tellingly, while Cassell is truthful about his Olympic achievements, he embellishes the year to cover up what he's really insecure about--his age.

CALIFORNIA DREAMING falters in the final third when it takes a melodramatic turn, and not every twist is entirely believable.  The film also suffers a bit from characters who are difficult to warm to and the uninteresting subplot involving Wynn's character.  This isn't the popcorn T and A flick you're expecting, but Hancock does provide a healthy amount of nudity from O'Connor (ODE TO BILLY JOE).  CALIFORNIA DREAMING isn't completely successful but is worthy of Danny Peary's "sleeper" description; Hancock and Wynn deliver some surprises without taking things too dark.  And yes, the title song is performed, an excellent cover by America played over the end credits.

Scarcity of characters you'd actually like to revisit; quite a few shallow folks here, hurting rewatchability.  Cassell's character probably resonates the most, and only if you've reached a certain age first--you'll likely find him as obnoxious as the local kids do if you're still in your twenties.  Also, it isn't your typical brain-dead summer flick, and came just before films of that type started their late night cable domination of the early 1980's.

FilmFanatic.org states that the cult following is "probably" due solely to O'Connor's nudity, but I disagree.  The same unusual qualities that likely caused it to fall through the cracks as "too serious" for the target audience also make it worth searching out as a change of pace.

CALIFORNIA DREAMING is currently streaming on Netflix Instant.
Posted by Hal at 6:05 PM

Great review! I love this movie! I remember that I saw it in the theater way back. And with repeated viewings I got to love the music! I found the rare soundtrack CD on ebay too! So glad you reviewed this one! Gnarly!

Glad you liked, Jaws, and thanks for reading! I really like this one myself; I believe it is still on Netflix Instant and on Epix HD as well on Roku.