Our Favorite Episodes: The TV debut of Marie Gomez (1960) 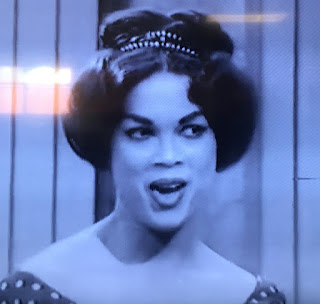 Through the wonder of YouTube, the Horn Section is proud to present a legendary television moment: the television debut of magnificent Marie Gomez:


Ms. Gomez is the subject of the most popular post in this blog's twelve year history, in which yours truly rhapsodized about her terrific performance in 1970's BARQUERO for the Crush-A-Thon hosted by Forgotten Films.

I'm not the only one who has been crushing on Ms. Gomez over the years.  YouTube user Panama Red has posted highlights from her many guest appearances from the 1960's on series such as THE WILD WILD WEST, I SPY, and of course her most famous TV role, as Perlita on THE HIGH CHAPARRAL.  With her show romance, Manolito (Henry Darrow) at a reunion a few years back:

And, at the height of her career on the show:


(YouTuber Panama Red has posted several Marie Gomez clips on the channel, but unfortunately has yet to share clips from her HONDO episode, Hondo and the Comancheros.  Too bad.  For now, you'll have to check out her catfight with Kathie Browne on getTV or on DVD.) 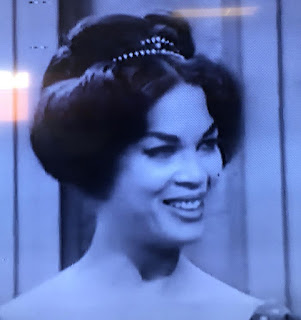 Two years before her prime time acting debut on DOBIE GILLIS and a full decade before BARQUERO, Ms. Gomez was a contestant on YOU BET YOUR LIFE.  It is that full May 26, 1960 episode at the top of this post.  The then-aspiring actress was teamed with 5'2" voice acting dynamo Daws Butler---and, at 5'6', towers over him.  Marie identifies her heritage as French and Spanish an in accent distinctly leaning towards the former. 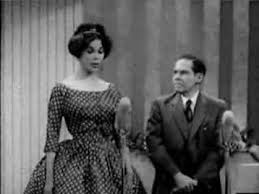 Groucho does the Bunny Hop,  and longtime Milwaukee Braves manager Fred Haney appears in the opening minutes, but get real--Marie is the main attraction.  Check out the whistles she gets in the finale--before she competes for the $10,000.  Marie arrives at the 9:02 mark--enjoy!

Look for Marie Gomez as Perlita Flores on THE HIGH CHAPPARAL on INSP weekdays at 6 A.M. Central.
Posted by Hal at 9:40 PM

Hal, I've got that You Bet Your Life episode on Saturday Morning Archives due to Mr. Butler. Pure fun.