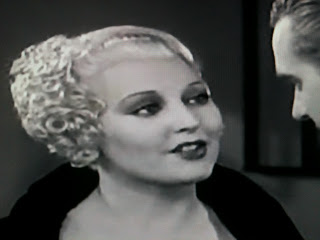 
Bert and Bob are penniless street vendors.  Literally living out of their car, they try to stay one step ahead of the law while peddling flavored lipsticks.  They put on airs to beauty supplier Todd and offer their "services" with a dual motivation: Bert's taken a shine to Todd's employee Lee and, of course, their dire financial straits.  Todd, whose business is on the verge of ruin herself thanks to double-dealing Meeker, accepts the offer.  When Woolsey's attache case gets mistaken for an identical one carrying "securities", the cops renew their pursuit of our heroes, following them to a pool hall and even cross-country after their impromptu representation of Todd's company in a race (shades of CANNONBALL!). 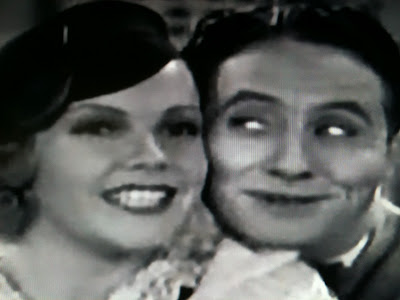 Thinly plotted and gleefully silly at every turn, HIPS, HIPS, HOORAY! is the favorite Wheeler and Woolsey film of many film buffs.  While I prefer COCKEYED CAVALIERS,  HIPS, HIPS, HOORAY is another entertaining Bert and Bob vehicle from the team's 1933-34 peak.  Both 1934 films are boosted by the team's de facto "third member" Lee, their best director Sandrich, and the incomparable Todd, who has dark hair (a seldom-seen look for her) in several scenes. 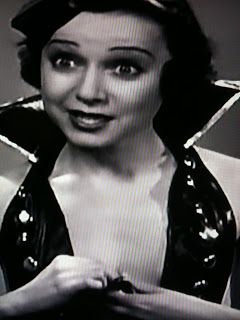 ﻿﻿The film's pre-Code vintage is confirmed in its opening scene, with a room full of naked lovelies freshening up in transparent bathtubs (hair and shampoo bottles obscuring strategic body parts, of course) while Ruth Etting sings "Keep Romance Alive".  Very reminiscent of the Clean as a Whistle, Fresh as a Daisy number from MEET THE BARON but given a touch of class by America's "Sweetheart of Song" Etting. 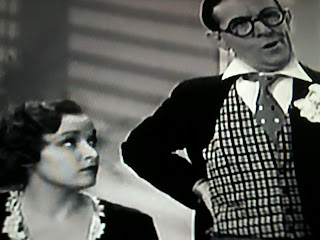 Etting disappears after her song, but she's too ladylike for the proceedings anyway.  With its setting in the cosmetics world, HIPS, HIPS, HOORAY boasts more scantily clad women than any other Wheeler and Woolsey feature.  Lee, Todd and Etting are joined by Dorothy Granger (taking dictation from Woolsey, who's channeling Rufus T. Firefly), June Brewster, Phyllis Barry, Marion Byron and Jean Carmen.  A highlight is the duo conducting a "guess the flavor" lipstick contest, with Woolsey going horizontal and stiffening (symbolism fully intended) in a manner worthy of Tex Avery's Wolf. 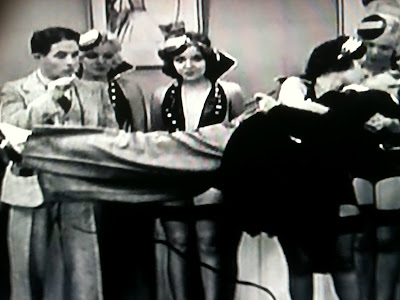 Like the earliest Wheeler and Woolsey vehicles (i.e. HALF SHOT AT SUNRISE and HOOK, LINE & SINKER) HIPS, HIPS, HOORAY! finds fast-talking Woolsey and naive romantic Wheeler facing unfavorable odds but triumphing in the end through sheer derring-do.  It's a shame that Sandrich (TOP HAT) only directed the team twice.  He really clicks with Bert and Bob, providing many inspired comedic moments to go with the musical interludes.  Kalmer and Ruby's Just Keep on Doin' what You're Doin' (originally intended for Zeppo Marx in DUCK SOUP) would become the team's best-remembered song.  It's the soundtrack to Bert's moonlight serenade and is reprised during an office trashing dance with all four principals and the film's coda.

The film loses steam during the car chase, with an over-reliance on Woolsey's "Whoa-ohh!" catchphrase and  intentionally outlandish rearscreen projection.  But as long as the boys are one step ahead of their pursuers on foot, HIPS, HIPS, HOORAY! provides almost as many laughs as ladies, with Bert and Bob's incredibly resourceful car (at various times a giant coffee machine, twin beds, chicken coop and veritable banana tree) and unsuccessful attempt to hustle the cops to at pool among the more memorable gags.  A well-paced, amusing and naughty example of 1930's comedy, HIPS, HIPS, HOORAY! might be the best Wheeler and Woolsey film to show the uninitiated. 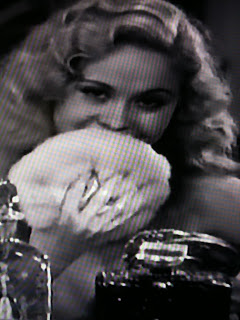 Kind of a surprise that 6 Wheeler and Woolseys made it out via Warner Archive before this one, arguably their best-loved and most remembered pre-Coder.  Even more surprising that arguably the team's worst film (THE RAINMAKERS) beat this one to DVD.  The long absence of RKO's most popular comedy team from DVD has been addressed here previously, but that's been changing in recent years thanks to WA.  With the long-sought after DIPLOMANIACS among the recent arrivals, the release of HIPS, HIPS, HOORAY! by the Archive now seems to be a mere matter of time.

Would make a perfect two-fer with COCKEYED CAVALIERS, which featuring a lot of the same personnel, similarly memorable musical numbers and was also directed by Sandrich.  I'd daresay this hypothetical 2-for-1 DVD would be all the Bert and Bob a casual fan needs.


﻿HIPS, HIPS, HOORAY! turns up occasionally on TCM and on Warner Archive Instant.

You're so right, all of W&W needs to be on DVD - my own favorite of theirs is DIPLOMANIACS, which at last has come out (and which bears favorable comparison to DUCK SOUP) - probably no other comic team of the early 1930s could milk pre-Code situations for all the innuendo possible than W&W. I always find myself thinking, how did they get away with THAT?, when I watch them!

For what it's worth Hips is now out on DVD via the Warner Archive W & W set that came out last week.