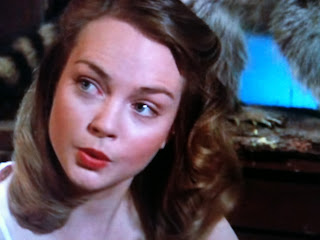 Why the Hell isn't this on DVD yet? Number 63


Lembeck and Casnoff are college students who spend summers working in the mess hall of summer Camp Oskemo, which caters to a Jewish clientele.  While competing for the ladies (virginal Shure and sexually aggressive Drescher) they witness everything we fear goes on inside the kitchen, declare war on tyrannical boss Huddleston, and pull pranks on him, snobbish parents, and snitches.  In order words, yep, wacky hijinks ensue. 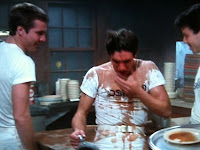 The year 1980 was probably the zenith for raunchy "snobs vs. slobs" comedies in ANIMAL HOUSE's aftermath, and that same year saw a number of "summer camp" films hoping to duplicate the grosses of 1979's surprising MEATBALLS.  GORP falls into both categories, and mainly demonstrates why the aforementioned films were so much better their imitators.  The poorly thought out script by Jeffrey Konvitz (his third and last screenplay to date) is the chief culprit, as the writer apparently had no idea what made the films he was emulating successful.

Huddleston lacks any real power to lord over his youthful charges, unlike John Vernon's Dean Wormer.  Vernon could threaten the Deltas with expulsion from college and draft eligibility.  What can Huddleston do?  Fine them when they're being paid peanuts and primarily there to get laid anyway?  Fire them from a summer job they all treat as elective at best?  The Murray-Makepeace relationship balanced the crazy pranks in MEATBALLS with a little heart and also helped give that largely plotless film some structure.  By contrast GORP has literally no mentoring or character growth of any kind, and little motivation beyond libido for much of anything.  We never get to know any of the campers or junior wait staff as anything more than comic props. 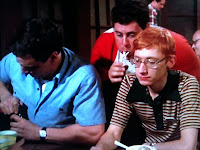 In the cases of the camp nurse and the orange haired answer to "Spaz", GORP has some decidedly undeserving recipients of unfunny, mean-spirited humor.  The situations presented are consistently uninvolving.  A good example is a bet between Casnoff and Drescher, with potentially rich comic possibilities from Drescher's side of it.  As LITTLE DARLINGS showed, you can successfully center an entire film around a similar plot point.  Here, the wager is resolved off-screen in less than 10 minutes and the result is quickly forgotten.  Konvitz just moves us on to the next derivative caper.

So, with the lack of a solid opposing force for Lembeck, Casnoff and crew to go against, little nudity (the raunch is mostly limited to toilet humor) and no conflict or characters for the audience to care about, GORP is left to rise or fall exclusively on the value of its gags--and the quality is lacking.  The setpieces all seem to be familiar and done much better elsewhere, right up to the finale in which Quaid somehow appropriates a tank to help demolish Oskemo.  The Faber parade it ain't.

GORP arrived in May 1980 with one claim to historical significance: it was the very last release by American International Pictures.  Michael Lembeck, son of A.I.P. icon Harvey (biker Eric Zon Vipper in seven BEACH PARTY films) was the nominal head of the youthful ensemble, and in a further nod to A.I.P.'s past, the campers screen I WAS A TEENAGE WEREWOLF.   Unfortunately GORP itself was a forgettable swan song for Arkoff's company, and barely met 1/6 of the Arkoff Formula (the last "F"--despite the lack of nudity).

It doesn't matter whether you're listing "summer camp" movies or grossout comedies:  GORP will be at or near the bottom of either list.  It bombed when it was released in May 1980, and with good reason. 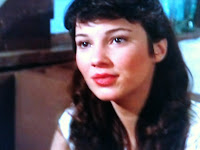 Really, the only people likely to be interested would have to be A.I.P. completists, or fans of the young actors (i.e. Arquette) on their way to better things.  Even those in the latter camp would be hard-pressed to find much of interest here though, for if you want to see Quaid or Drescher on the make there are better youth comedies available from the same era: THE SENIORS and HOLLYWOOD KNIGHTS respectively.  In Drescher's case, KNIGHTS was released the same month as GORP.

GORP has been out of circulation for some time but is currently available for streaming at Netflix Instant.
Posted by Hal at 6:37 PM

Do you know the name of the song at the end of the credits?

If it is the same song from the opening credits (I think it is if I remember right) it's Henry Small's "Come On and Get Ready".

Thanks L.J.! I just DVR'd Hardbodies over the weekend :)