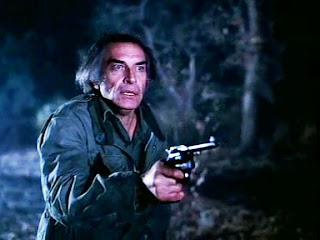 In a Midwestern forest area, tentacled green bloodsucking creatures about the size of a sponge are ambushing and killing would-be hunters and campers.  Among the victims: gun enthusiast Mitchell, Cub Scout leader Storch, and a teen couple, Thell and Caruso.  After the demise of the daters, their friends Nelson and Nutter seek help in a secluded local diner, but they're only able to come with two strange locals, Palance (as the requisite "creepy gas station owner") and battle scarred Vietnam vet Landau.  The four of them set out to find and destroy the alien(s) behind the gooey, gory attacks.

Barely noticed during its 1980 release, WITHOUT WARNING has developed a devoted cult in the three decades since, thanks mainly to two factors: unavailability and Arnold Schwarzenegger himself crediting the low-budget horror film as an inspiration for his smash PREDATOR.  Operating with only a $150,000 budget, Greydon Clark (JOYSTICKS) nevertheless manages to put together some memorable visuals despite inconsistent pacing. 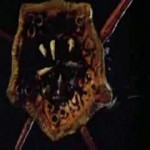 It was Clark who suggested the change to the spinning, appendaged attackers (in the original script alien Hall used a bow and arrow) and they provide some gleefully disgusting moments.  When airborne they appear to be spheric, then rectangular.  Finally, when one lands on a windshield we can determine it is pentagonal.  For some reason, their attacks are limited to grown humans, as they let Storch's troop flee the area unharmed while draining only the hapless scoutmaster.  Why?  It's never explained.  Just go with it!

Clark also manages to put together a name cast for the dollars, though Storch, Mitchell, Brand and Meeker probably all spent one day apiece on the set, tops.  As for stars Palance and Landau, few viewers seeing their work here would have thought they were watching two future Academy Award winners.  Palance smiles continuously, Landau stays wide-eyed and tightens his jaw.  Both are shamelessly hammy, and their wild overplaying helps keep things afloat during an extended dull stretch in the second half.

Strangely, WITHOUT WARNING has probably become overrated due to its scarcity at this point.  Practically every film blog out there has covered it in the past few years, including A.V. Club and Film Fanatic.  (Yeah, I'm late to the party.  Sue me.)  While it may not be a high point on anyone's resume (except maybe Clark's) it is more impressive when taking the budget (half of which went for Palance and Landau) and influence into account.  PREDATOR lifted the premise and 7'2" actor Hall (who played the alien in both films) from this little-seen, very silly, sometimes boring, but also pretty funny and fondly remembered little horror flick. 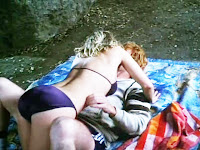 It's a ridiculous low budget horror film that isn't scary and loses momentum halfway through.   Filmways was defunct less than two years later (absorbed into Orion Pictures), which may or may not have impacted the video availability of WITHOUT WARNING, though it probably didn't help.

Any time a film this obscure has such devoted advocates, the filmmaker was obviously doing something right.  He was indeed: giving us the aliens and expirations that stick in one's memory, and hiring the veteran character actors who energetically give this flick much of its heft.  Landau!  Palance! The also crazed Mitchell!  The wobbly Meeker!  The legendary Storch, who was the only intentional comic relief ("They were a, uh, bean growing tribe.")!  Not to mention David Caruso making a screen debut he'd probably rather forget.

WITHOUT WARNING made its MGM HD premiere in the summer of 2010 and has been repeated, so that's your channel to schedule check when seeking this one out.
Posted by Hal at 5:46 PM

I actually saw this at a movie theater in Brownsville, Tx, when I was like 12 o 13. I remember it was heavily publicised on local TV, so at least in Brownsville, Tx, it wasn't that obscure of a movie. Plus, I saw it at a rather decent cinema, not a drive in. I remember dragging my parents to see this one. As years went by, the only thing I remembered was the aline, those flying pizzas, Martin Landau and Jack Palance. Being an avid Fangoria reader since those days, it received zero coverage, which was disappointing, but it did receive some minor coverage in Famous Monsters, even making it to one of its covers.
Years later I bought in on internet and relived it again. Boy, what a slow paced movie this is, and yeah, it does get kind of boring after a while. Still, it featured some decent acting (at least better that in Friday The 13th movies) and the FX were little but gory. I remember it fondly, although I'll be the first to admit it's not a "classic" gore film and that it might bore the living crap out of anyone these days. I just saw it last night again, with my 7 year old daughter and she was laughing! Christ! Hahaha!
The thing about getting a decent release should be considered by its director. I mean, far worse films are given "A Treatment" when debuting on DVD or Bluray so why not do the same for Without Warning. Plus, it does feature real actors; both Landau and Palance being Academy Award Winners.

Hope I can replace my not-so cheap bootleg copy with a decent release in the near future!