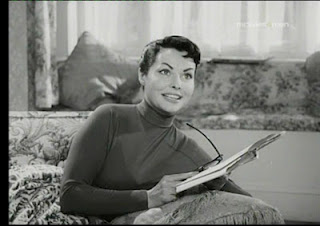 
Mango and Tucker are conducting experiments on magnetic fields in a rural laboratory in south England.  Despite their reservations about "a woman" helping out with this "highly skilled work", project director Goldie appoints Andre to work with the two men.  The only initial hazard is occasional interference with the town's radio and TV reception, but then the obsessed Mango accidentally blows a hole in the ionosphere.  The resulting unintended consequences: a mysterious stranger anxious to fit in quickly among the townspeople, a formerly harmless hobo turns violent, and insects grow larger than human beings!


The final film in Tucker's late Fifties British sci-fi trilogy, THE COSMIC MONSTER (originally titled THE STRANGE WORLD OF PLANET X in the U.K.) reached North American theatres on a double bill with THE CRAWLING EYE in 1958. While the special effects remain modestly budgeted at best and our boy Mack Tuck makes his moves on beautiful Andre (who is distractingly dubbed), MONSTER lacks both the atmosphere and the cheesy fun of its predecessor. 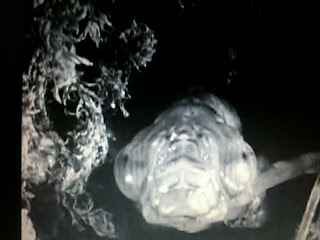 Gunn fails to build the sense of genuine dread that Quentin Lawrence successfully brought to THE CRAWLING EYE and screenwriter Paul Ryder's script lacks the interesting character backstories that helped keep Lawrence's film compelling during its own talky stages.  The action is unimaginatively staged when it commences in the final reel, and at one point we glimpse a U.S. Army vehicle heading to save the day despite our setting.  Also, why use bullets and not insecticides?


COSMIC MONSTER does manage to hang with THE CRAWLING EYE in one regard: copious amounts of alcohol consumption.  Much time is spent at the pub hoisting pint after pint while everyone sits and talks (and talks, and talks); too bad no party ever develops (despite the band advertised on the local pub's sidewalk sign) because Gunn's drudging pace could stand some punching up.  At least the drinking games you can play at home on your own won't suffer.

Tucker gave forceful performances in both THE CRAWLING EYE (as a scientist who was also a man of action when necessary) and THE ABOMINABLE SNOWMAN (as a crass "ugly American" butting heads marvelously with Peter Cushing) but seems tentative and less effective in this script, more of a spectator than a doer.  While the first two films remain well-remembered genre classics a half century later, THE COSMIC MONSTER has been largely forgotten on this side of the pond.  It's worth a look for aficionados of the bug-movie subgenre, but on the whole it's pretty forgettable. 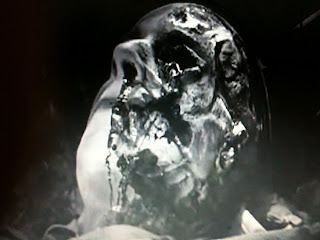 Isn't well-made or memorable; as the last of Forrest Tucker's British genre films, it's also clearly the least.

THE STRANGE WORLD OF PLANET X/THE COSMIC MONSTER would still be a nice fit on a two-fer with its old tag team partner THE CRAWLING EYE, or maybe paired with another cheesy bug film of the era like THE MONSTER FROM GREEN HELL.   This made TCM's schedule for the first time last summer during Sci-Fi Thursdays and hasn't repeated yet, so be on the lookout for a rerun if you're interested.

The film is also available for viewing at YouTube.