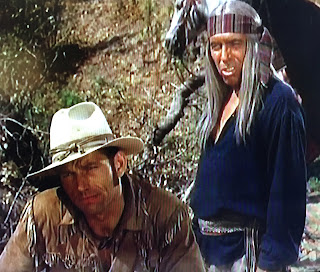 
Hondo is giving the Apaches marksmanship lessons on order from Colonel Crook.  The purpose is twofold: to strengthen their hunting skills and Chief Vittoro's tribal leadership by discouraging any insurgency.  It's a controversial order within the confines of the Fort, though.  Captain Richards is none too pleased with it after he finds the entire Holbrook family dead, massacred by renegades led by Vittoro's would-be usurper Saldado.   Richards grows warier when Crook is summoned to Washington, D.C. and flamboyant "Buckeye" Jack Smith is his temporary replacement, an assignment arranged by well connected freighting magnate Victor Tribolet. 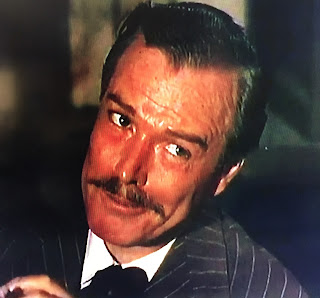 With his hand-picked commander on the way, Tribolet plots to engineer a full-scale war.  Relaying inside information on ammunition deliveries (via henchman Krantz) to the ambitious Soldado, Tribolet plans to freight firepower to both sides once hotter heads prevail.  After Smith imperils months of meticulously managed trust by ordering all Apaches to surrender their arms, Hondo disobeys the new Colonel's directive and rides to Tucson to retrieve Crook.  This insubordination lands Lane in the guardhouse just as Soldado sets a trap for Smith and Richards by volunteering to be the first to turn in all of his people's weapons. 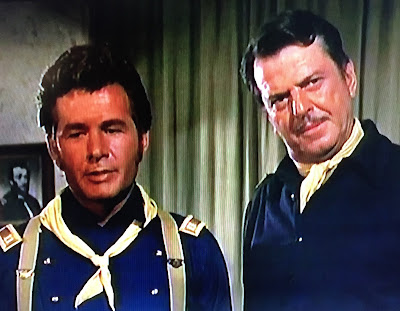 An arrogant but accomplished senior officer arrives to threaten the uneasy peace in Arizona territory.  It's the same setup presented in Hondo and the Savage, but Donn Mullally's lone HONDO offers a much more nuanced script, realizing richer possibilities while offering effective (and timeless) political commentary.  Like General Rutledge, "Buckeye Jack" shows ignorance of the territory, but the relentless self-promoter (as Buffalo derisively details) Smith is the less humble--and therefore, more dangerous--of the two.  Rutledge arrived at Fort Lowell having "never fought" Native Americans before.  Smith, fresh off a successful campaign against the Sioux, is much more assured that he can bend any Apache to his will coming in.  Even moreso after Soldado's quick response to the Colonel's directive. 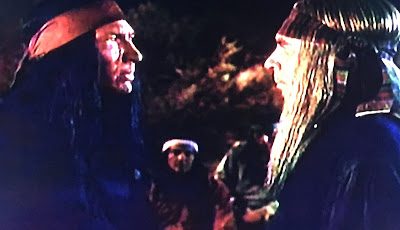 By bringing Vittoro (absent from Savage) back to the forefront, Mullally is able to present wide ranging points of view from both sides.  When Richards expresses displeasure with Crook's plan, the Chief points out to the skeptical Captain that his braves are also training to support Richards.  In the wake of back-to-back wagon attacks, Smith's order certainly seems understandable to an outsider (if not to Crook).  And given the history between the army and the Apache, even mutineer Soldado isn't entirely unjustified in his distrust of any reliance on the white man. 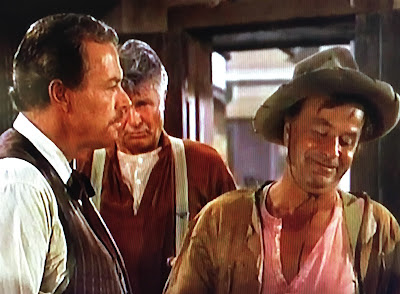 While Soldado's following isn't insignificant (note the braves who depart with the renegade when he's ordered away by Vittoro), he lacks the numbers to overthrow his Chief.  Nevertheless, Soldado is a more formidable challenger than Silva--emboldened enough by his successes to brazenly call the Chief an "old woman" twice in front of Hondo and other tribal leaders.  It is arguable whose methods are less admirable (both kill unarmed settlers) but Soldado, who uses Buckeye's arrogance against him, bests Silva as a tactician.  Little surprise that his coup d'état comes closer to succeeding. 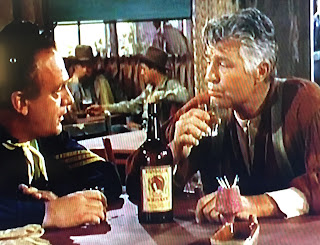 For all the shades of grey Mullaly provides, there's still a couple of one-dimensional villains in Hondo and the War Hawks. Victor Tribolet, making his first appearance as the brother of the freighting tycoon played in the pilot by Michael Rennie.  With Rennie unavailable for the series, a well-cast Glenn Langan (THE AMAZING COLOSSAL MAN) made the first of his five appearances, during which he would become a major thorn in Hondo's side, albeit one defined mainly by greed.  Tribolet was Langan's last television role, but he returned for a minor role in Fenady's feature CHISUM in 1970. 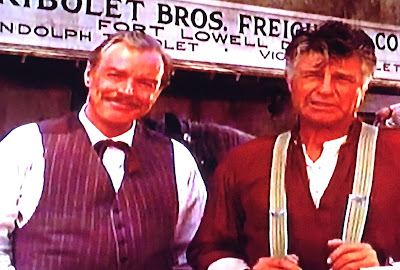 Jim Davis returns from the two-part pilot as henchman Krantz, mainly to ask the questions answered by Tribolet's expository lines.  Krantz doesn't fare any better with his fists here than he did previously, though, remaining winless in the HONDO ring. Whether he faced former mining boss Gallagher, Buffalo or Lane, the result was always the same on this series--the future Jock Ewing got his ass kicked.  No wonder he didn't return after this third go-round. 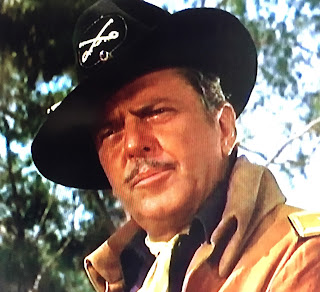 Finally, Mullaly's ironic closing note is a perfect capper, keeping our true heroes unsung.  Proving that the squeaky wheel gets the grease, it's blustery Buckeye Jack who ends up with full credit for "diffusing a volatile situation" back in D.C., stealing Colonel Crook's medal out from under him in the process.  Arrogant myopia resulting in top honors and a cushy desk job in the nation's capital after royally screwing up and almost getting everyone killed--gee, good thing that could never really happen.... 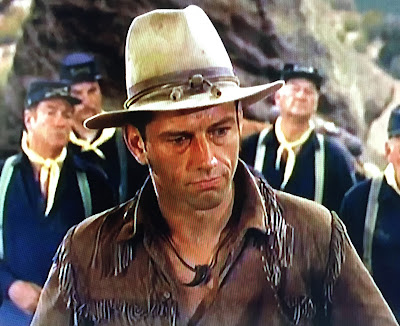 WHO'S THE REAL HERO HERE?

Chief of the Chircahua and Apache Nation Vittoro, makes his sixth appearance in the first seven shows (he would appear in only three of the remaining ten) and gets to ride to the rescue again--for the third time, after Hondo and the Eagle Claw and Hondo and the War Cry. 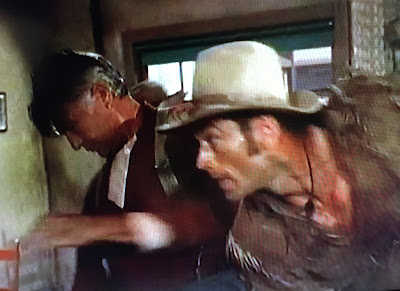 Hondo gets the better of Saldado twice, needing only one punch the first time.  He also gets into a tag team battle against Tribolet's henchman, in which Lane knocks henchman Krantz into a watering trough before the fight is quelled.  And as usual, the battle royale was hosted by Fort Lowell's favorite thirst quencher.  Speaking of..... 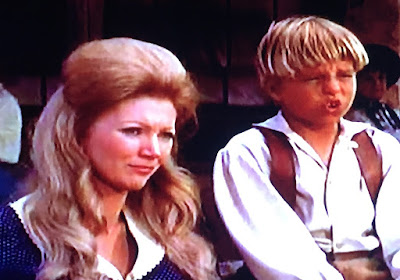 Yes, but the front window was shattered during that donnybrook, which saw Hondo and Buffalo on one side and Tribolet's minions on the other.  A smashed window is always flashy, but all in all, there was less property damage than usual in the end.  Several tables and chairs were overturned but still intact. 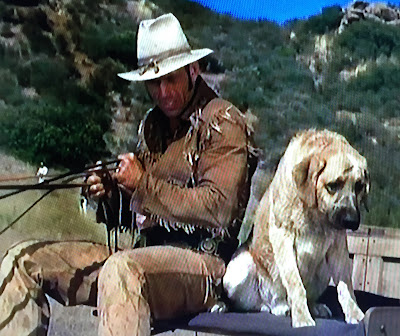 Sam is present throughout, but for once he's just an observer.  He does get to hang back with Buffalo during Lane's trip to Tucson, and for once, the canine's presence in the watering hole doesn't start a fight.  We do learn Sam is apparently a teetotaler. 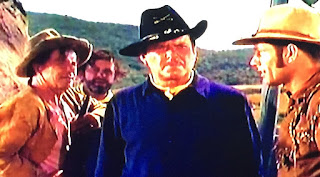 A very well developed entry, probably the best illustrating the precarity of the Vittoro/Crook alliance.  Also commendably introducing another challenging obstacle to maintaining it in Tribolet.  Another of Fenady's intriguimg supporting casts: Langan's hissable villain became a frequent foil and Carroll's TV debut was also his first appearance onscreen in eight long years.  This installment's social commentary has aged every bit as well as its bitterly ironic coda.  (***1/2 out of four)

HONDO currently airs every Sunday morning at 6:30 AM Central on getTV.
Posted by Hal at 4:30 AM

Hi,
I am new to this blog. I am trying to find the yearly prime time ratings for I Dream of Jeannie (1965 - 1970). I have searched the internet, Variety Magazine, the Nielsen page, The Paley Center, even TV Guide. It is very difficult information to find due to the fact that the series was only in the top 30 for seasons 1 and 4. I was hoping Mr. Horn might have this information or have a suggestion of a resource for me to try. I would GREATLY appreciate it!!!! Feel free to email me at: