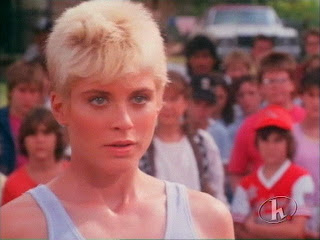 
The Slaters (not related in real life) are teenage siblings living in a Corpus Christi trailer park. After a run-in with Tubb and friends at a local drive-in, Christian's bike is stolen, then trashed. Helen Slater complains to detective Coyote, who initially dismisses the complaint.  When she presses Tubb's father (Richard Bradford) to pay for the damages, he attempts to rape her. In the ensuing scuffle Bradford is shot and the Slaters go on the lam, eventually taking willing hostage Gordon. Meanwhile, Coyote realizes his mistake and media coverage intensifies after the "abduction", with Billie Jean cutting her long blond locks into a crewcut and releasing a videotape of her demands. After teenage girls all over Texas begin cutting their hair to show support for the Slaters' cause, Bradford schemes to profit from the situation. 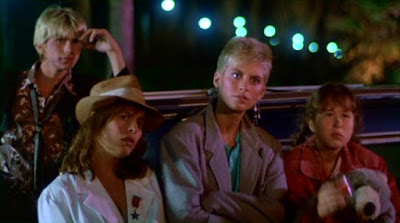 Corpus Christi locations give the film a fresh look, but it cruises as far as it does on the charisma of the Slaters. Green-eyed Helen Slater makes a fetching heroine. Unfortunately the twin box office bombs of SUPERGIRL and BILLIE JEAN prematurely ended her opportunities as a big-screen star.  Only 22, she was relegated to supporting roles (RUTHLESS PEOPLE, THE SECRET OF MY SUCCESS) and occasional straight-to-video leads (HAPPY TOGETHER) going forward. Though she reportedly hated the haircut, she's more attractive with it IMO.  Making his feature debut, Christian Slater shows star quality already. He'd be headlining teen flicks of his own within three years of BILLIE JEAN's release. 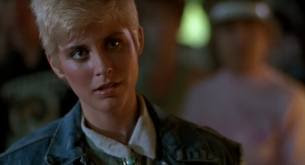 In fact, Christian would have much better luck with his own teen outlaw/reluctant spokesman in PUMP UP THE VOLUME, which points at the biggest box office problem here: timing.  This film, with its non-ironic folk hero and anti-commercialism theme might have been better received in the late 1970's or the early 1990's. In the summer of BACK TO THE FUTURE and John Hughes' Brat Pack-driven winning streak, the target audience in 1985 favored lighter fare or drama more relatable (i.e. THE BREAKFAST CLUB).  As for teens who were interested in vigilante justice in 1985, they preferred seeing it handled in over the top fashion by the likes of Stallone, Norris or Bronson rather than a female peer.

The other major problem is the script, which is too contrived and especially too overwrought. Helen takes time out from running to save an abused boy in a scene that comes out of left field. A crucial revelation at the denouement is similarly strained, and Helen's decision to cut her hair is inspired by a viewing of SAINT JOAN.  Just to hammer this very questionable comparison home, a giant replica of Billie Jean is later "burned at the stake" as the centerpiece of a merchandise-fueled bonfire.

Actually, if anyone is a martyr here, it's little brother Christian. Over the course of the film, the male Slater gets his bike stolen and trashed; suffers a brutal beating; is shot; is stuck in a rickety shack on a wet, rainy night.  Then, finally comes the ultimate sacrifice--this Texas boy barely into his teens has to dress up like his sister in front of a crowd of hundreds!  Now that's true suffering.

With its jumbled script undermining worthy intent (i.e. examining the exploitation of young by old, and poor by rich) THE LEGEND OF BILLIE JEAN is a lot more lightweight than it wants to be. Ultimately the most memorable thing about it is one of Pat Benatar's biggest hits, "Invincible". Director Robbins hasn't directed a feature since 1991's BINGO, but his other credits include DRAGONSLAYER and CORVETTE SUMMER. 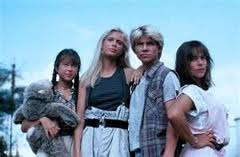 Music rights may be an issue: the Chrysalis (remember that label?) soundtrack includes many of the label's top artists: Pat Benatar, Divinyls, Wendy O. Williams and Billy Idol.

The film bombed in the summer of 1985, one of the very few teen oriented films not to hit that year, despite heavy promotion from MTV.  Out of step with other genre films of its period.

Incredibly, one rumor is that the master copy of this film was lost in a fire some years ago. However that seems unlikely, since it has been turning up on cable in HD. 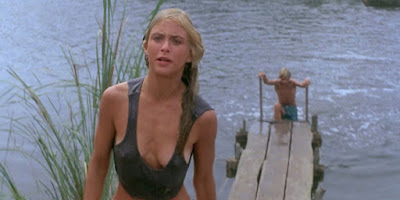 
Early training ground for Christian Slater, who gives a solid performance in his debut, and a rare theatrical lead for Helen Slater. Also a choice part for future Lisa Simpson voice Yeardley Smith who gets some wonderfully foulmouthed lines.

This film will have some appeal to those of a certain age who didn't find Molly Ringwald empowering enough, or anyone who considers Vermont to be the promised land.

Showtime and TCM have aired it this year. The film also had a healthy cable run throughout the late 1980's, and with the success of other 1980's time capsules on DVD, this might sell if released. Though this isn't a good film, it isn't terrible.  Meanwhile true bombs like SOUL MAN and JOHNNY BE GOOD are on DVD, so why not BILLIE JEAN?  Fair is fair!
Posted by Hal at 3:12 PM

Worthy of note- this film will be showing next week, in Austin, TX- I saw it here opening weekend, and will now revisit the scene of the crime.
I am a-twitter!

this is on dvd! i have it here infront of me!