Labor Day Weekend brought sad news to all classic television fans with the report that prolific director Leslie H. Martinson passed away on Saturday, September 3 at the age of 101. 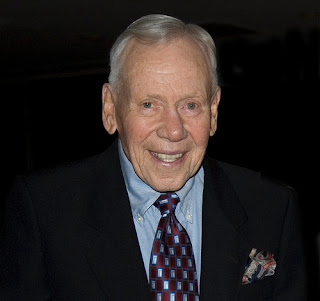 Boston-born Martinson actually started out as a newspaper columnist for his hometown Boston Evening Transcript, but migrated to the West Coast in 1936, starting out in MGM's mail room.  From this inauspicious Hollywood beginning he worked his way up through the ranks, becoming a script supervisor for such classics as THE YEARLING (1946) and EASTER PARADE (1948) and eventually ending up in the director's chair for the first of many, many times on a 1952 episode of COWBOY G-MEN.


While Martinson ended up helming a number of features, starting with the 1954 Mickey Rooney starrer THE ATOMIC KID, it was on television that he made his greatest impact.  In a career that spanned four decades, "Les" lent his steady hand to everything from MANNIX and CHEYENNE to THE MISADVENTURES OF SHERIFF LOBO and HEY, MULLIGAN!  But here at The Horn Section, Leslie H. Martinson is revered as the most prolific MAVERICK director of them all.

Martinson directed a whopping 18 of the 124 MAVERICK episodes; runnerup Douglas Heyes was responsible for 13, with Richard L. Bare (who also made it to age 101 before he passed away last year) and Arthur Lubin guiding 11 apiece.  No disrespect to the others, but for my money, I'd also pick Martinson as the greatest MAVERICK director of them all: for starters, he handled both Gun-Shy and Shady Deal at Sunny Acres--arguably the top two MAVERICKs among the series' most ardent fans. 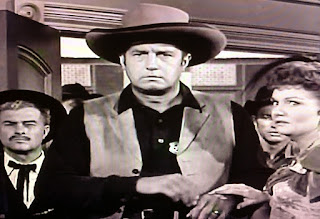 For the former, Martinson delivered a pitch-perfect parody of GUNSMOKE from a marvelous Marion Hargrove script, breezily lampooning everything from its iconic opening credits "shootout" to Marshal Dillon's weekly contemplations at Boot Hill.  Fifty-seven years later, it is still the gold standard for television parody in any genre, rarely even approached, much less equaled. 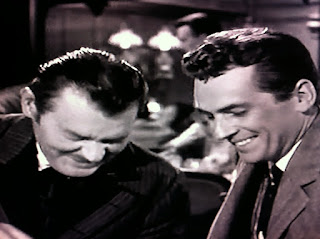 Shady Deal at Sunny Acres was perhaps the quintessential Bret/Bart teaming.  It was co-written by Heyes, who usually directed his own teleplays, but Martinson handled this timeless "sting" flawlessly: it remains as fresh and funny today as it was in 1958.


Martinson was the go-to guy for the often wonderfully warped teleplays of Marion Hargrove, also helming the memorable The Rivals (the only MAVERICK to feature Garner, Kelly and Roger Moore) and The Belcastle Brand (James Garner's favorite segment).   The top MAVERICK according to A.C. Nielsen Co.?  Martinson brought that one home as well: The Saga of Waco Williams scored a 35.3 rating and 51 share in February 1959.

While most of the creative minds that drove MAVERICK into the top 10 left along with Huggins in 1959 (most notably Heyes and Hargrove), Leslie H. Martinson continued to guide installments during the Coles Trapnell era: The Ghost Soldiers, A Tale of Three Cities and the memorably wild Hadley's Hunters were among the director's later efforts.  Triple Indemnity, Martinson's final episode, introduced Peter Breck's Doc Holliday as a recurring foil for Bart Maverick.  It would be the series' last successful attempt to do so: Breck ended up appearing five times during the final season.


With the success of Martinson's television work, it is perhaps fitting that the feature he is best remembered for is the 1966 big-screen version of television's BATMAN.  In addition to the challenge of stretching a thirty minute series to feature length, Martinson had to film with a new Catwoman as Lee Meriwether took over for unavailable icon Julie Newmar.  (Nothing against Ms. Meriwether, but it was a thankless task for any other actress in 1966.)  Martinson was more than up to the tasks: given his deft handling of Batman's bomb disposal and the rehydration fiasco at the U.N., it's a real shame that he only handled two episodes of the actual series (and none after the first season).


I could go on, but you could sum it up by simply saying that on television, he did it all and he did it well--I'd say he even made something of his final assignment, SMALL WONDER, which is no small feat.  R.I.P. Mr. Martinson.  More of Leslie H. Martinson's sublime work for MAVERICK to come on future installments of MAVERICK Mondays, and more reviews of all kinds to follow here at The Horn Section.

I usually hate people who respond to news like this with "I thought he passed away years ago!" but in this case that applies to me as well. I remember seeing his name on episodes of Fantasy Island, Eight is Enough, Wonder Woman and so many other shows. Directing the "Cincinnati Kids" episode of The Brady Bunch must have been particularly challenging with the theme park crowds and location shooting.

It's been more than thirty years since Top Gun was released and still, a bunch of ill-minded fashionistas believes Cruise will be given the Tom Cruise Top Gun Flight Jacket in the upcoming Maverick. I mean c'mon.

I am glad that i came to see this, really loved it. Thank you for sharing it. I have bookmarked your page, excited to see more of it! Men B3 Brown Shearling Jacket