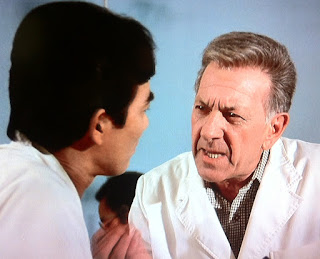 
Since it's been awhile, here's the introduction and overview to our affectionate tribute to QUINCY, M.E.: THE HILARIOUS YEARS (a.k.a. The Soapbox Years, if you prefer) at this link.  Please see the links under the photo of the great Jack Klugman on the right side of the page for previous installments.  Also, please note that I'm not deconstructing each episode scene by scene anymore.  Quite frankly, it takes too long for me to write and you to read.  So, in hopes that it doesn't detract from the fun, I'll just give you a review instead.


77 year old emphysema patient Sy Schuster is out for a morning walk with his wife while Los Angeles is under a smog alert.  Not a good idea, and he ends up on Quincy's slab without finishing it.  Turns out the treatment clinic for lung patients is virtually next door to Frontier Oil Refinery.  When the Big Q learns that they've been in violation of clean air regulations, he declares air pollution as the cause of Schuster's death.  Bad publicity?  It's the Chronicle's top story! 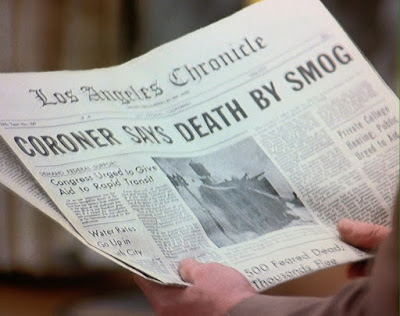 (It probably topped the front page over at Lou Grant's Tribune too, I bet.)

Frontier Oil President Craddock predictably brushes off the coroner's findings.  After all, Mr. Schuster had plenty of complicating comorbids and was aged.  But then a tweener asthma patient at the same facility collapses outside (also after being warned not to go out there!), making Quincydamus' dire prediction of a death toll closer to reality.  Quincy's willingness to go out on a limb also captures the attention of activist Dr. Ruddy, who informs Q-Man that the Clean Air Act is in peril with the new Congress, and it may be, since it turns out that Craddock isn't content to just thumb his nose at the current rules. 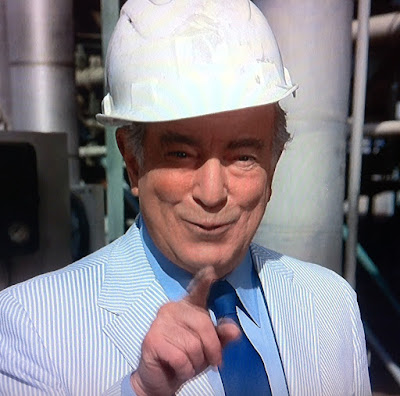 During its first act, To Clear the Air has all the makings of a Hilarious Years classic a la Bitter Pill, Dead Stop and the piece de resistance of the soapbox era, Next Stop, Nowhere.  We open on stacks polluting the air a la COLD TURKEY's closing shot, with several shots of people out and about, wearing bandanas (over their noses and mouths) and smoke protection masks while bicycling and roller skating on the sidewalks.  Meanwhile, a voice over radio announcer wishes us good morning thusly: "And a smoggy one it is!  Fourth day in a row of ninety plus temps and second stage alerts!  And, sorry to say, no end in sight.  Not much of anything in sight, for that matter!  Visibility is zilch!"

Next, our weekly villain Craddock refuses to make adjustments on the sulfur levels--it's profits over people again!  Well, OK, he does cite the people at Frontier who would be laid off if production fell.  Schuster collapses and dies in eye-popping fashion immediately after, sending Quincy on his usual mission for statistics ("The refineries were supposed to cut back 20%").  The officials at AQMD bemoan a go-to QUINCY, M.E. reason for lack of enforcement:--"there's only 86 of us for 70,000 sources to watchdog!"  Act One ends very promisingly, with Dr. Astin aghast at reading the headline-making proclamation above. 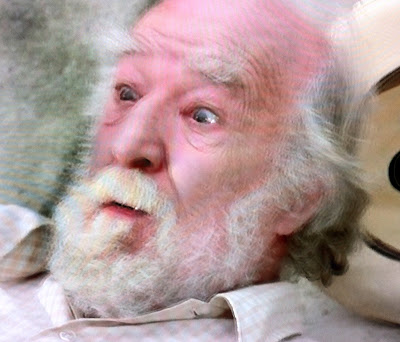 Looks like a Quincy Comedy Classic in the making, right?

After this auspicious beginning, the three following acts mostly disappoint.  Our courageous coroner has a sanctimonious sentence or two, but never raises the decibel level while delivering them.  That's right--not even one Outrage! this time.  Does he take over the jobs of others (i.e. directing the toxic waste disposal team in Dead Stop)?  Well, Quince tags along for the inspection at Frontier Oil, but only as an observer.  He never directly confronts Craddock or any of the underlings at Frontier--no shouting, no face to face space invasion--doesn't even wag his finger at them!


Most damaging of all to that Big Q reputation, he has that look in his eyes after meeting Dr. Ruddy (and he should, since she's played by Joan Pringle) but nope, no sly attempts to get her to Danny's for dinner or a drink.  He just gives low-key testimony in front of Congress at Ruddy's request, and cedes center stage to her at the hearing.  It's like watching an episode of BATMAN in which Bruce Wayne and Dick Grayson never go "to the Batpoles!" 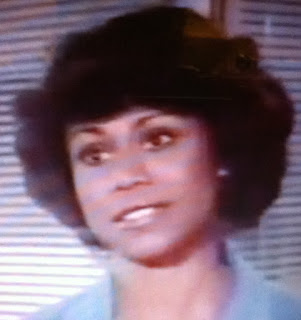 To Clear the Air seemed tailor made to give us that Soapbox Quince we know and love so well.  What happened?  Writer Sam Egan also scripted Bitter Pill, Next Stop Nowhere and Never a Child, so he had no problems taking us over the top elsewhere.  Director Lester Wm. Berke, on the other hand, was helming a television episode for the first and only time in his long career. 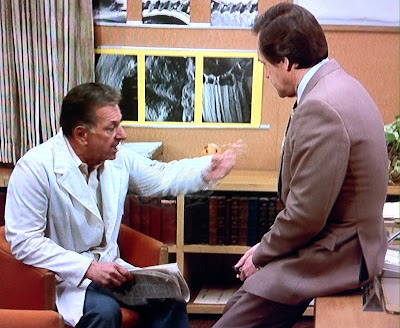 Berke's only other credit as director was the 1958 feature THE LOST MISSILE, a project that he took over when his father William Berke (a veteran with nearly 100 direction credits) passed away unexpectedly on the first day of shooting.  The younger Berke made his name as a producer, and he was in charge of QUINCY, M.E. during the 1979-1983 seasons.

So the director of To Clear the Air was THE boss during The Hilarious Years---why was this episode so low-key and lacking in unintentional humor in its final three Acts?  Since Berke rarely helmed a project himself, did he just lack the assured flamboyance of (say) Ray Danton?  It's entirely possible that Berke intentionally dialed things down, sensing that the histrionics of Dead Stop and Bitter Pill were turning his show into a comedy.  Along those lines, it's very possible is that air pollution was a topic near and dear to the show's producer, and he wanted to ensure the most earnest treatment possible by directing this lone installment himself.  In my opinion, this is the most likely reason.  Berke was no novice, and the ominous montages of a smog-ravaged Los Angeles remain ubiquitous from beginning to end. 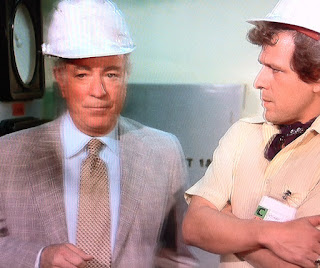 Fresh off his quintessential rich asshole role in CUTTER'S WAY (1981), Stephen Elliott gives To Clear the Air most of its spark.  With his controlled glee at outwitting the inspectors and callous disregard for the two deaths, he's in fine form.  But even with the knowing reference to the lack of AQMD manpower, his Craddock is a far cry from the one dimensional villains of the aforementioned issue episodes.  Pep pill proprietor Zagner was just a really, really bad guy with no redeeming qualities, but Craddock is fiercely loyal to Frontier Oil's employees: he's even put the son of his "right hand man" through college and given him a job afterward.  These shadings keep him from being a cartoon, but when coupled with his lesser qualities, add to the stagnation of To Clear the Air between comedy and tragedy--The Hilarious Years needed cartoonish villains, dammit! 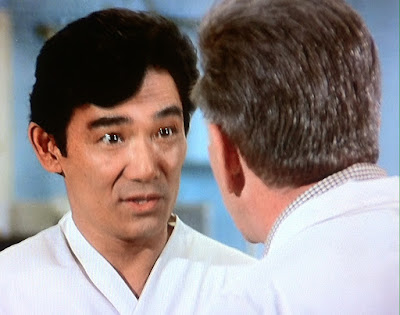 WHO'S THE REAL VILLAIN HERE?

For about the 174th time in the show's run, Quince makes poor, deprived Sam break a date in order to stay late and do extra lab work.  The almost sadistic smile Quincy gives when the perennially disappointed Sam turns away is kinda hard to take here.  C'mon, Quincy, don't you ever get tired of cock blocking this overworked and undersexed man?  I'll bet Craddock lets his employees get laid once in a while......

THE BOTTOM LINE:
This one could use either a more subtle visual approach or some scenery chewing, one or the other.  Berke's sober, low-key treatment is undercut by the ubiquitous and giggle-worthy montages, while an atypically subdued Quincy removes most of the unintentional jollies for those of us who tune in to see our beloved coroner in superhero mode.  Ironically, on this series, excessive melodrama usually proved more effective at sticking a worthy issue in the viewer's mind than putting The Big Q under wraps (like Berke does here) did.   A letdown.  (** out of four)