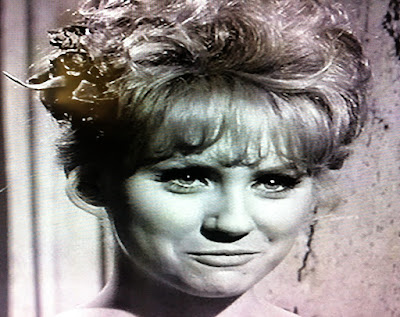 This one hurts, just a couple of days after we learned that Yvonne (BATMAN) Craig had succumbed to cancer at age 78.  Already in 2015 we've also said goodbye to Christopher Lee, Theodore Bikel, Dick Van Patten and HONDO himself, Ralph Taeger.  Now we learn that Melody Patterson, F TROOP's beloved Wrangler Jane, has passed away at age 66. 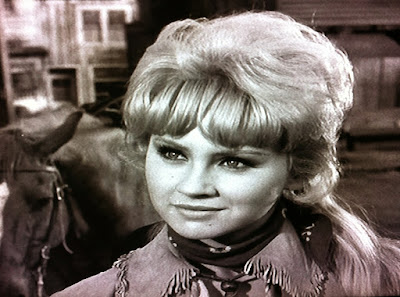 Born in Inglewood, California on April 16, 1949 (some sources initially gave 1947, but--see the next paragraph), Melody Patterson studied at the American Academy of Dramatic Arts in New York City and appeared as a guest star on a 1964-65 episode of George Burns' WENDY AND ME prior to winning the role of sharpshooter Jane Angelica Thrift, proprietress of Fort Courage's general store and girlfriend to the "Scourge of the West", Captain Wilton Parmenter.

I'm sure you've heard the incredible story that Melody was only 15 when she won the role for the F TROOP pilot that ABC later picked up for its Fall schedule in February 1965.  Back in the day, she was able to hide her real age until several weeks into filming, when several episodes had already aired and the show had already become one of ABC's very few bright spots that Fall. 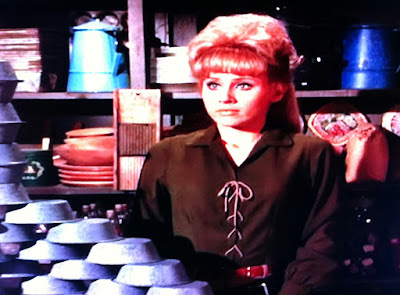 After the truth came out, Patterson explained that she had been turned down for a number of roles when she gave her real age--she specifically mentioned the regular role on NBC's HANK that ended up going to Linda Foster.  So, the ambitious actress began lying about her age.  (Her F TROOP co-star Forrest Tucker had done the same thing in 1934 at the same age, first to get a job in a burlesque club and then, in a bit of foreshadowing, to join the U.S. Cavalry.)


A bold move that worked for the teenaged actress, since Patterson ended up being so perfectly cast that it is hard to imagine anyone else playing Wrangler Jane.  The athletic starlet (she bowled and practiced yoga in her spare time) learned how to ride, shoot and rope for the role--which ironically lasted until her 18th birthday.  The same month that Melody turned legal, Warner Brothers pulled the plug on a third season for F TROOP in April 1967 after the sale of its TV division to Seven Arts.  ABC almost certainly wanted the show back for 1967-68: it was the network's second highest sitcom in the Nielsens behind BEWITCHED at the time.


Patterson had lent her singing talents to both F TROOP (That's Show Biz) and SHINDIG and appeared to have a very bright future in the industry.  Instead, after leading roles in the features CYCLE SAVAGES (1968) and BLOOD AND LACE (1971) and a number of TV guest shots (ADAM-12, THE MONKEES) she ended up putting her career on hold for marriage to HAWAII FIVE-O co-star James MacArthur.  Patterson did guest star three times on her husband's series but was otherwise inactive onscreen for the rest of the Seventies.  Unfortunately, her career never regained the lost momentum after this long hiatus.


Melody Patterson was interviewed by Tom Lisanti for his book Drive-In Dream Girls (a book I consider a must-read, by the way) and wrote a column, "Wrapping with Wrangler" for Wildest Westerns magazine in recent years.   The aforementioned and thoroughly insane BLOOD AND LACE, which I consider to be her best role outside of F TROOP, is coming to Blu-Ray and DVD on November 24 of this year.  That film is also highly recommended by yours truly.

And for a recommendation to check out Melody's comedic talent in her most famous role, her best F TROOP showcase is in the riotous first season entry, The Courtship of Wrangler Jane, in which O'Rourke and Agarn attempt to help her realize her dream of becoming Mrs. Wilton Parmenter. 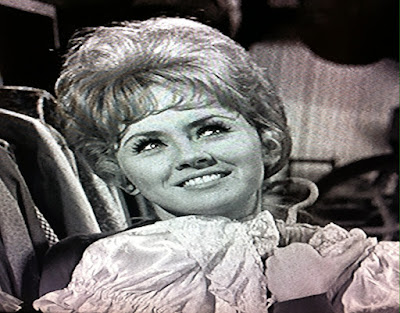 R.I.P. Ms. Patterson.  You can check out her work each weekend!  F TROOP currently airs on Me-TV for a full hour each Saturday morning at 5 AM ET/4 AM CT and on Sunday mornings at 6 AM ET/5 AM CT.

My favorite actress ever! I started watching F Troop at 15 (I'm currently 18) and I loved Melody because, being about the same age, I felt like I could somewhat relate to her. Wrangler Jane quickly became my role model. I wanted to meet Melody so bad... I learned some new things about her in this article, which is pretty cool. RIP Melody. I'll never forget how your beautiful singing voice and colorful eyes (I never quite figured out if they were green or blue) helped make one of the toughest parts of my life a little brighter.