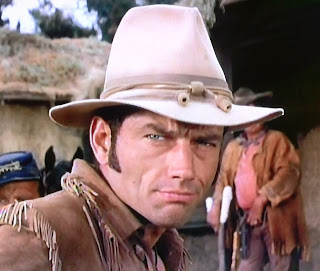 "Your lives are meaningless compared to Hondo!"


En route to meet Colonel Crook, Hondo and Buffalo are attacked by four renegade Pimas, with Buffalo suffering a gunshot wound to his right calf.  If Pimas are trespassing on Apache land isn't enough of a worry, Crook fears that rumors are fueling a potential gold rush on the Superstitions--which by treaty is Apache land. 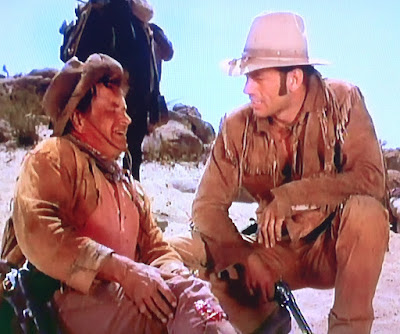 With Chief Vittoro agreeing to a geological survey and Buffalo sidelined on crutches, Hondo is the only scout available to guide the party through the mountainous terrain.  However, when the surveyor arrives, Lane is none too pleased to learn that he'll be working with former cavalry Captain Frank Davis--the man responsible for the death of Lane's pregnant wife Destarte at the Raid at Willow Creek.


Hondo and the Superstition Massacre puts Fenady's past series further in the rearview mirror.  Johnny Yuma and Jason McCord were both still searching when THE REBEL and BRANDED ended: Hondo Lane catches up with the man he's sought for eight years in only the fourth episode (third produced) of HONDO.  But there's a surprise within the surprise as well.  The long-awaited confrontation doesn't provide the segment's climax--instead, Lane and Davis meet before the opening credits, with Emberato living up to his Apache name in the process.  Buffalo is the only person who knows just how to intervene.


Ralph Taeger was never considered a thespian of great range.  The taciturn star had expressive eyes but could sound strident when vocalizing excitement (e.g. his initial scene in THE CARPETBAGGERS).  But if this limited Taeger as an actor, it also made him a perfect choice to play Fenady's embittered and emotionally repressed Hondo Lane, since his outbursts are purely physical.  Keeping the audience on Hondo's side isn't an easy task after we see him attack Frank (and nearly beat him to death).  Still, Taeger manages to pull it off, with the completely unpoised quality of his performance only enhanced by his vocal restrictions.  Four episodes in, he's made the role originated by John Wayne his own.

One can't help but be somewhat sympathetic once we learn the cruel outcome of Hondo's eight year pursuit of revenge.  General Sheridan gave us a shorthand version in Hondo and the Eagle Claw: "a northerner who joined the South" in the war between the states and "hurt the U.S. Army plenty during the War and himself plenty in the years since".  But in Hondo and the Superstition Massacre, we find out that Lane joined the Confederates specifically to hunt down a man who wasn't even in the Civil War at all. 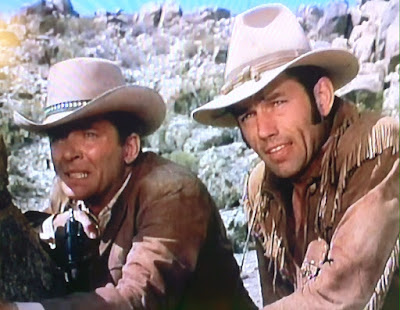 Derisively referenced by Sheridan as being "one of those West Point types" in the series' opener, Captain Frank Davis had been out of the USMA barely a month when he ordered the Willow Creek attack.  In over his head on his very first command, Davis realized too late that his regiment was obliterating "a village of sick old men and helpless women, Mister" (as Lane reminds him).  This realization was enough to make Davis resign from the Army immediately, and the former Captain has been suffering from PTSD ever since--just like Hondo.  While Hondo has been self destructive in the years since, Davis has suffered recurrent nightmares and suicidal thoughts. 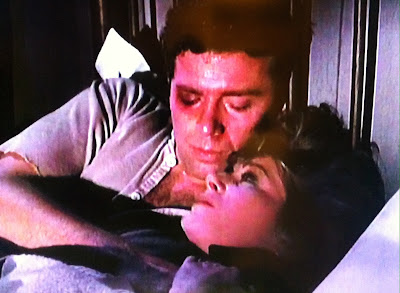 And yet, it isn't sympathy for Davis' torment that keeps Lane from taking vengeance, but rather his own realization that he could best honor his Destarte's memory by not allowing Mrs. Davis to suffer the same fate.  The ever-patient Mrs. Davis is the best half of her husband, and Hondo knows the same held true in his own marriage.  "I always said you were more civilized than I'd ever be." Davis and the Mrs. are both dismayed to find Hondo Lane waiting for them when they reach Fort Lowell, so why would Davis take this surveying assignment so close to the scene of his crime?  Wouldn't there be a much better than average chance that either Lane or Vittoro (or both) is still there?  Whether a subconscious death wish took him back to Arizona or not, Davis needs closure badly enough that even dying seems preferable to persistent torment.  It's clear, for example, that guilt over his past actions keeps him from pressing charges against the scout after their initial "meeting".  Some HONDO guest stars chewed the scenery opposite Taeger's tendency to underplay, but Reed resists that urge.  The future BRADY BUNCH star is completely convincing as a man haunted by the single uncivilized decision of his life.

It's likely that Hondo and the Superstition Massacre (third in the production schedule but fourth episode aired) was pushed back to allow the show's hero a more positive portrayal in Hondo and the Singing Wire first.  After all, you already have a rough protagonist who will take some getting used to--you don't want the audience subjected to the disturbing impression Lane leaves in this teaser too early.  Fenady's script is gutsy and assured, in many ways completing a trilogy with the series' first two segments, and Katzin (Hondo and the War Cry) impressively stages all of the action sequences, most notably that one-sided Lane-Davis fistfight. 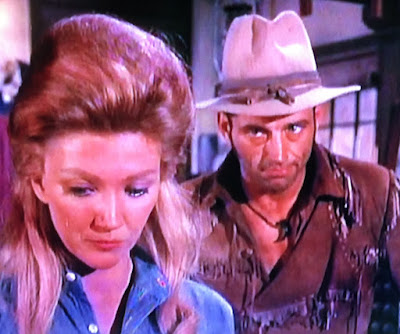 Interesting trivia:  If BRANDED had been renewed for the 1966-67 season, Fenady planned to change its format.  Jason McCord would have settled in one place (like Hondo Lane in this series) and would have become a surveyor (just like Frank Davis did after leaving the army).  Interesting commonality: all three characters reached the rank of army Captain before leaving the service for good. 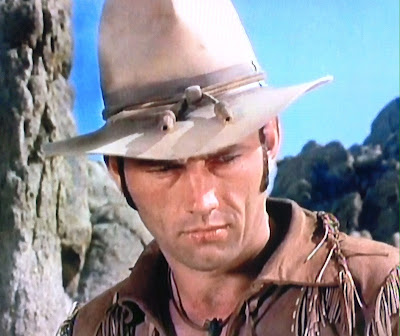 Nothing could top the one he opened on Davis in the teaser.  Davis has reason to fear for his life, and several troopers, including Captain Richards, end up as collateral damage trying to stop the beating.  Impressively vicious for prime time in 1967.  Hondo next kayos an annoying drunk with one right cross in the cantina--while seated!  (More on him below) but by his own admission "wasn't doing so good" in his duel with Mad Dog.  To be fair, it was under Pima rules and Hondo was likely groggy from his second concussion in about three days.

To the delight of the owner of Fort Lowell's watering hole, not a single chair is harmed.  Hondo's epic takedown of Davis takes place outdoors, and Unwashed causes no damage when he falls to the floor unconscious inside it.

Character actor Claude Hall has a twenty second (and about fifty word) cameo as Unwashed, that chatterbox drunk mentioned in the previous paragraph.  He had a minor career in the mid-Sixties and must have been an acquaintance of Fenady's, since he had small guest parts in all three of the producer's series.  Hall disappeared from Hollywood altogether shortly after Hondo and the Superstition Massacre, and was apparently much worse than annoying off-screen.


WHO'S THE REAL HERO HERE?

Buffalo saves Hondo from a murder charge early and a Pima ritual late.  Not bad for a guy who got a hollowed out leg in the opening minute.

Sam is chided for being a bit slow to sniff out the Pimas in the teaser, but he more than redeems himself later by fetching help from Fort Lowell that arrives in a nick of time.  While Hondo still won't let Mrs. Davis feed Sam table scraps, the canine does manage to steal two of Mrs. Dow's homemade apple pies before his human can get to them. 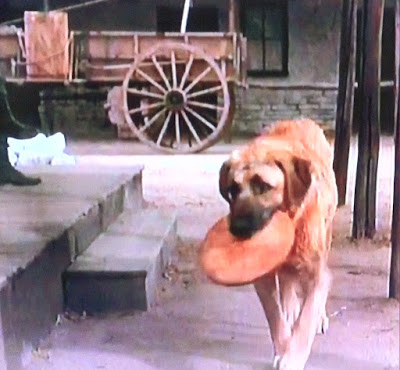 A gutsy script is solidly directed and acted, with no shortage of action or emotional resonance.   With a fair number of surprises in store for us, Hondo and the Superstition Massacre perfectly caps a trilogy with the two part pilot.  Certainly one of the series' finest hours.     (**** out of four)


HONDO: THE COMPLETE SERIES is currently streaming at Warner Archive Instant.
And starting September 19th, 2015, HONDO will air Saturdays on getTV at 3:30 PM Central.
Posted by Hal at 6:58 AM