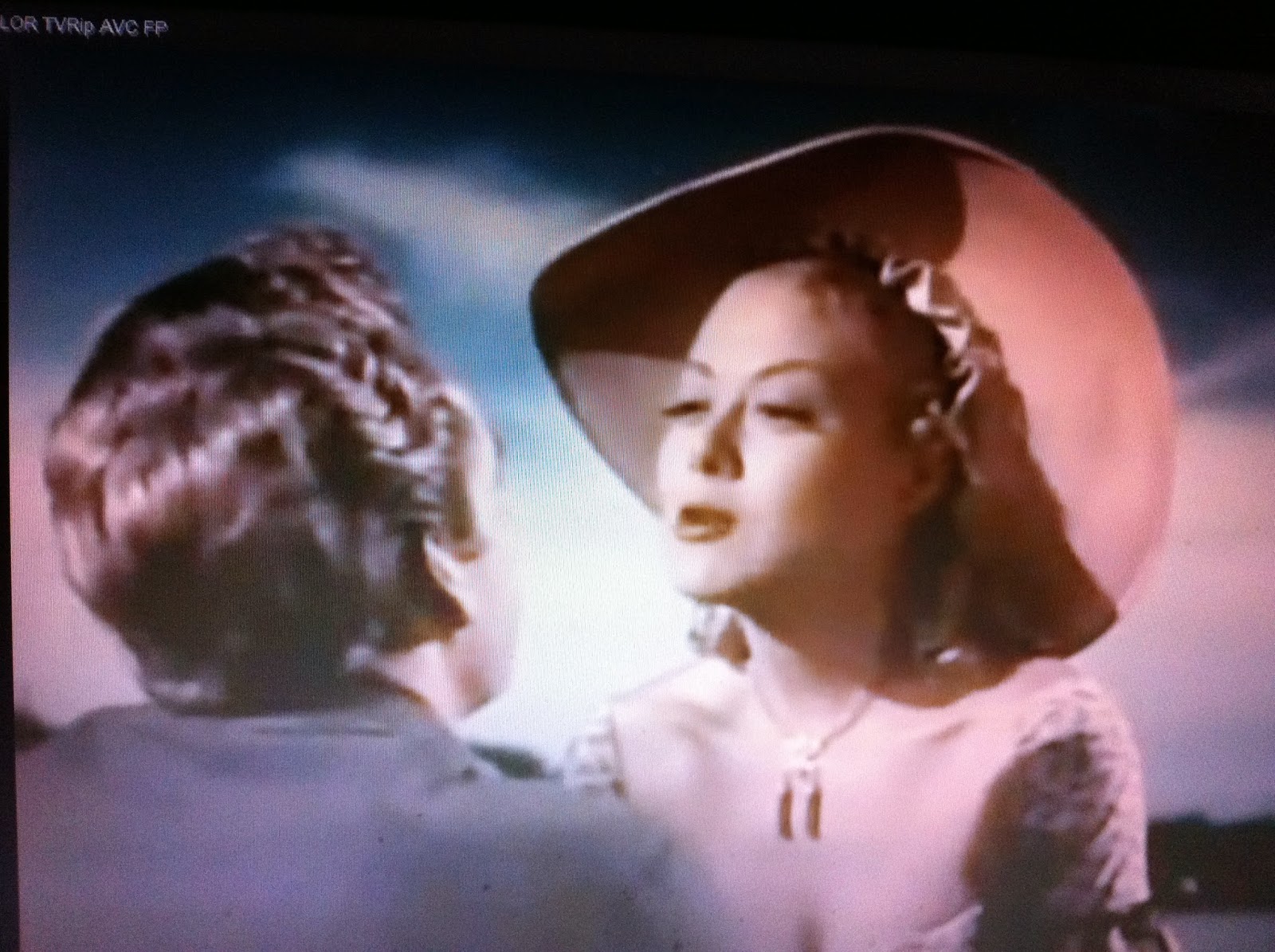 
Railroad man Tucker draws the ire of steamboat owner Cabot, first by winning a lucrative mail contract from the stage line, then by winning wealthy Mara's heart away from Cabot. Sensing that the railroad will next be taking business from his boats, Cabot tries to halt progress by bribing Tuck's subordinate Wills and smuggling whiskey to the railroad workers. Meanwhile, Tuck convinces Mara's father (Withers) to invest in the railroad, and exotic French-educated Keokuk princess Booth tries to woo Tucker away from Mara. Cabot's attempts to thwart the growth of the railroad turn into a personal vendetta against Tucker, as he challenges Tuck to a formal duel, then turns to direct sabotage. 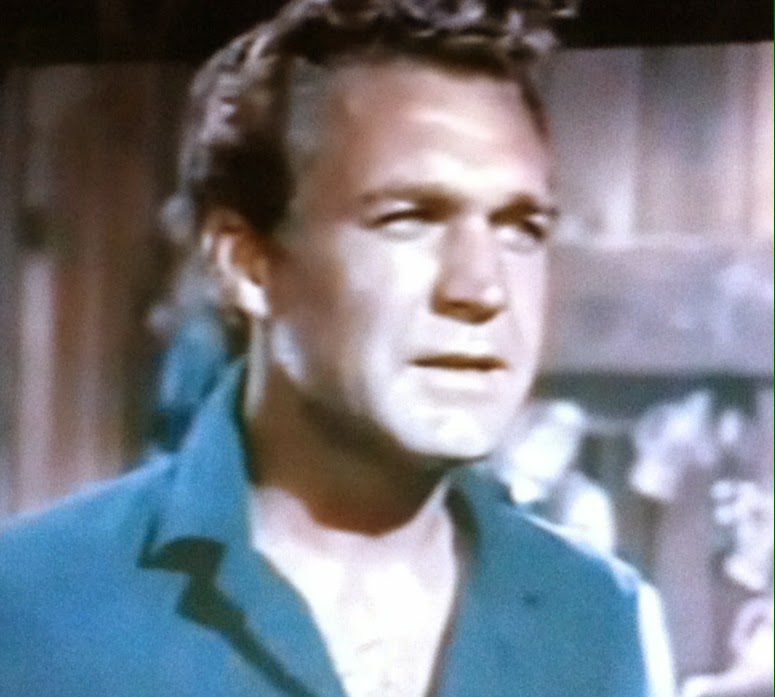 Following his breakthrough role in SANDS OF IWO JIMA, Tucker got his first opportunity to headline a Republic western.  Filmed primarily in Oklahoma (McAlester) in Trucolor, with a script by James Edward Grant and a strong supporting cast, ROCK ISLAND TRAIL received heavy promotion in the spring of 1950. 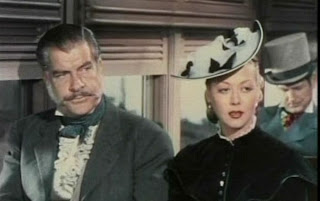 6'5" Tucker was forever playing stone-faced villains during the 1940's and 1950's. Even when starring in films like CALIFORNIA PASSAGE and THE ABOMINABLE SNOWMAN he was typically a truculent protagonist ("I don't like people", he declared in the former). ROCK ISLAND TRAIL gave Tucker the opportunity to play an unreserved good guy. Tucker's Reed Loomis is persuasive enough to sway investors, inspiring enough to have Wills' undivided loyalty, and charming enough to not only attract both Mara and Booth, but to keep Booth's loyal friendship even after he sidesteps her pass. He's also adept with guns, his fists, and in the most inspired setup, a mop--Tuck's choice of weapon after Cabot challenges him to a "ridiculous" duel. 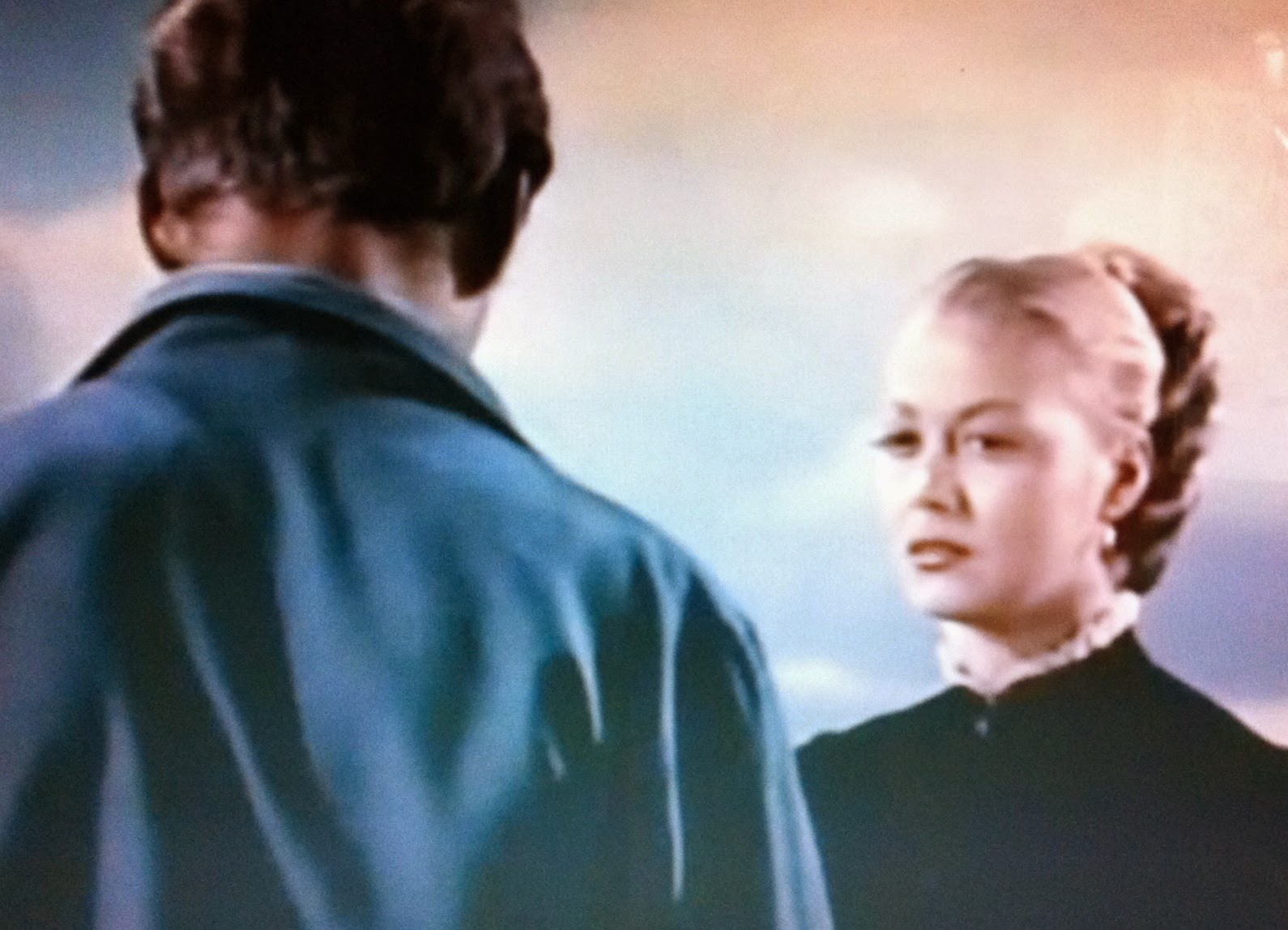 Tucker seems to relish playing an extroverted hero for a change. Unfortunately the script is one of  the lesser efforts from Grant, who also wrote SANDS OF IWO JIMA and countless other John Wayne vehicles. There's too much stilted dialogue, and it's impossible to believe that Cabot got to the engagement stage with Mara given that neither she nor Withers can even stand him in the beginning. Booth is unconvincing as a French-Native American princess, and the use of rear screen projection is distracting in a few key scenes. 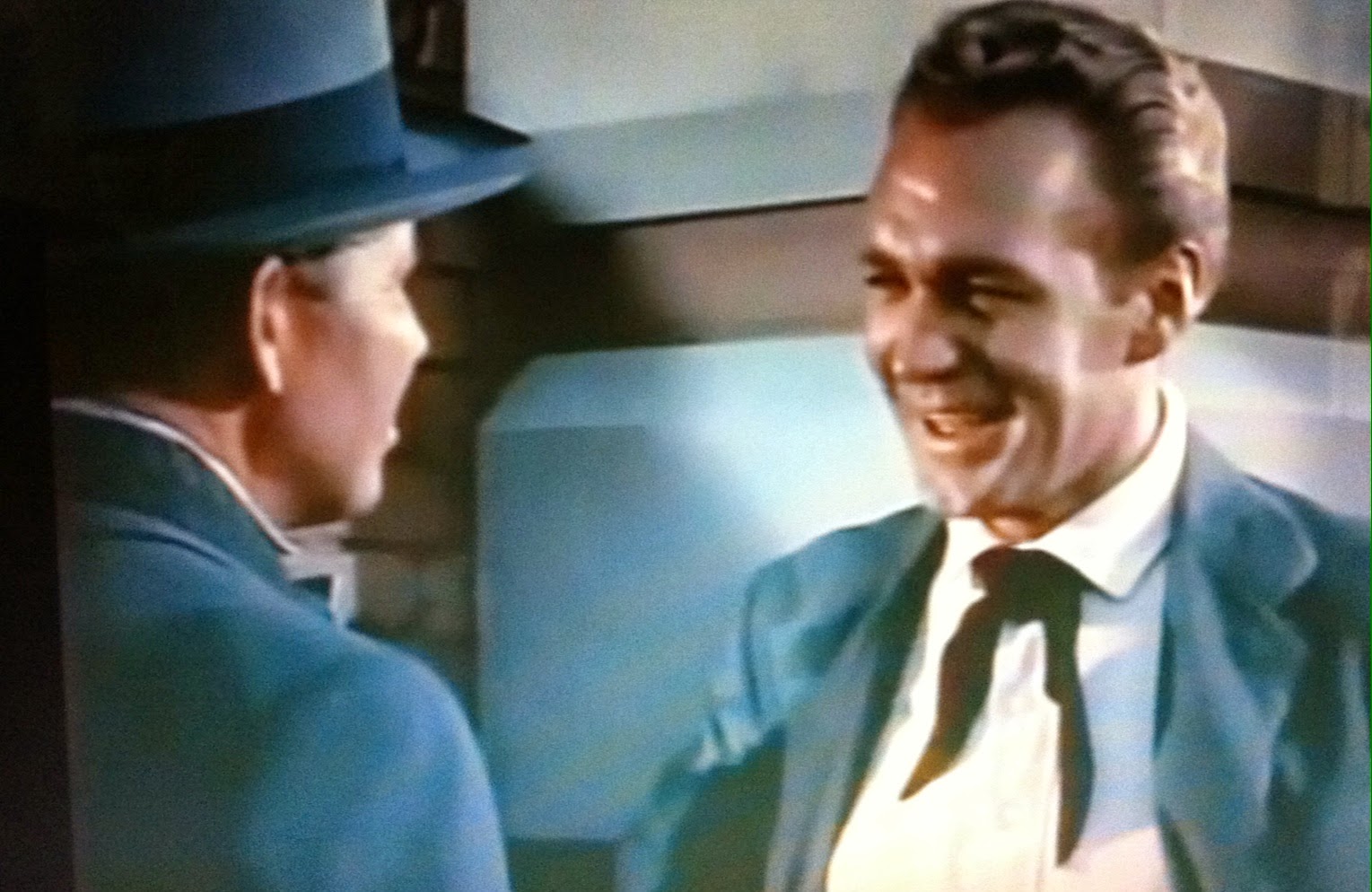 This being a Republic film directed by Joseph Kane, there's plenty of action, even if the most memorable scene is that mop duel. The train/stage race, an exploding bridge, several fist fights, the inevitable attack from a hostile tribe (instigated by Cabot, of course)....there's even a courtroom trial with the railroad represented by young lawyer Abraham Lincoln, played by Jeff Corey!  ROCK ISLAND TRAIL isn't quite the sweeping epic Republic intended, but it is an agreeable if largely unexceptional example of old school kitchen-sink action. 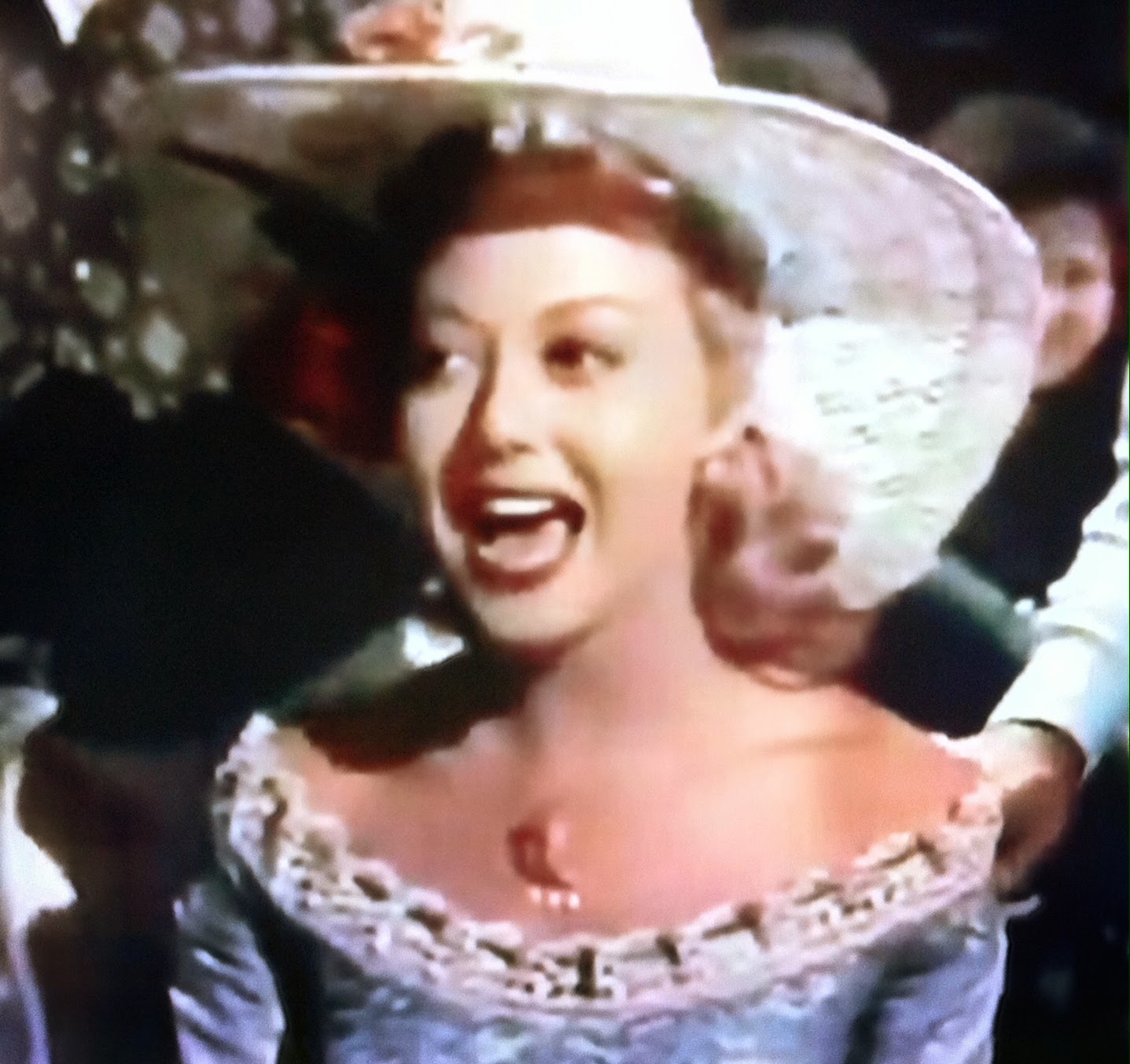 
Outside of Tuck's atypical (at least, pre-AUNTIE MAME and THE MUSIC MAN) role and his duel with Cabot, there's very little here you haven't seen before. And despite the heavy promotion, ROCK ISLAND TRAIL had mediocre box office returns in its day. 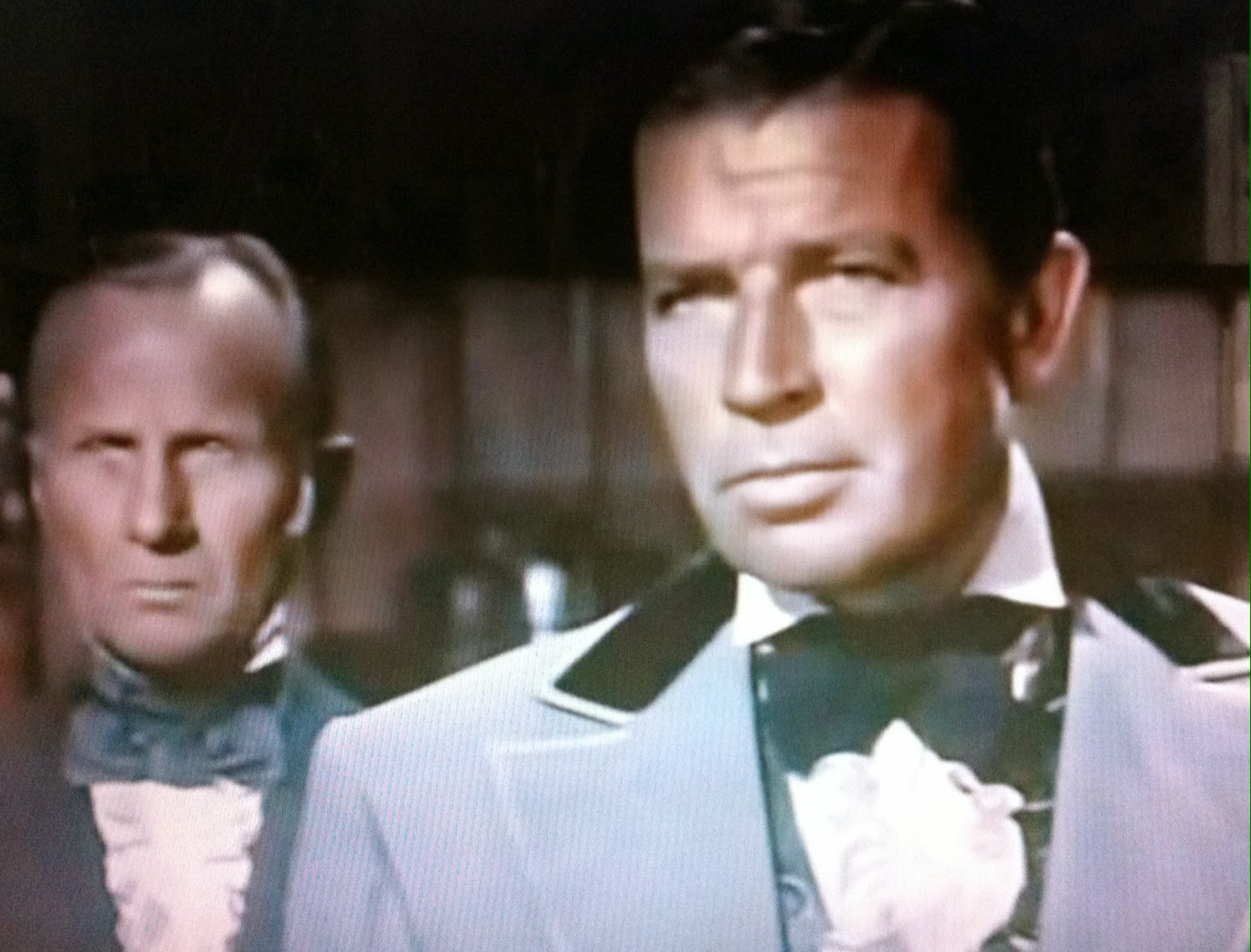 
I'd love to see some Republic box sets.  Tucker made enough solid action films for a good one, and other fun boxed sets could be compiled for stars Wild Bill Elliott, Rod Cameron and Wendell Corey.


Maybe the ladies could be included too: Joan Leslie, Adele Mara, Vera Hruba Ralston.  Well, okay, maybe not Vera....Sorry, Ms. Ralston, and R.I.P.  Let's just say her much older husband was Republic's founder and President, in case you're wondering how she kept getting plum roles despite lacking acting talent.


Regardless, ROCK ISLAND TRAIL and countless other Republics keep turning up regularly on Encore's Western Channel, so there's an audience out here that would love to remember, or (if too young to remember like I am) just see what action films were like circa 1950.