At 64, David Niven plays Count Dracula for the first and only time. With the assistance of manservant Bayliss, Niven hosts tours of his castle to search for his unwilling donors among the visitors. With Playboy playmates Shiriff, Bird, Carlson and Linden on the next tour, the count really perks up. He's seeking the blood of a nubile lovely to revive his bride Vampira, who's been in a coma for a half century.. After gathering the samples carefully (not ONE victim becomes undead in the complicated process) Niven and Bayliss successfully perform a transfusion in which Graves awakens as Vampira, now black. 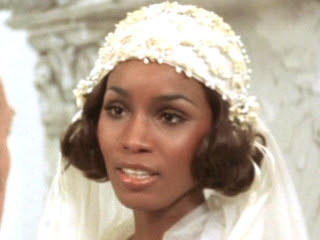 Rather than being thrilled about having his beloved back, Niven is puzzingly nervous about miscegenation, stating that "people will talk".  In Transylvania???  There's also a newfound generation gap between them, as the rejuvenated Graves is now way too energetic, youthful and horny (even bisexual) for jive turkey Niven. He spends the rest of the film trying to keep her out of sight(!), seeking another blood donor to "change her back" (!!) and generally being the least cool Dracula ever.  Meanwhile Graves takes in BLACK GUNN sans Niven, loses her British accent for 1970's American slang, dances lasciviously at the disco and seeks men and women to quench her thirst. 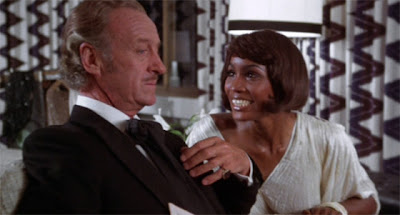 Nowhere near as exciting as it sounds, VAMPIRA is sunk in countless ways.  For starters, Niven seems like a debonair Count, and given the premise he is appropriately playing Drac as old and tired. But naturally a certain amount of menace is required for the comedy to work, and who's going to fear a tired, old Dracula?  And despite the ubiquitous product placement for Playboy and the sight of libidinous Graves on the prowl, the titillation is all one big tease (one scene of brief nudity) and the overall execution is inept on almost every level. 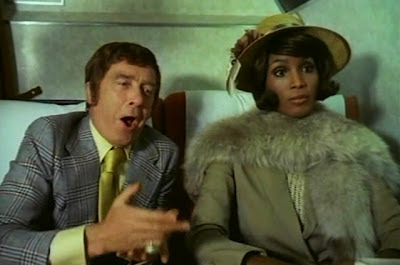 Donner's limitations as a director were apparent by this time---WHAT'S NEW PUSSYCAT? was a decade behind him--- and given a weak script by Jeremy Lloyd he fails to bring any spark to the proceedings.  Dull rather than droll, Lloyd's script is not only devoid of laughs, but largely of sense as well. Why does Dracula need a middleman and removable fangs to collect his blood? Why does he take Bird's blood if her skin color bothers him so much? Why doesn't he just go in through the front door when a cleaning lady closes the window on him during his midnight stroll? The denouement can be seen coming at least a half hour away---(SPOILER ALERT)--- Niven becomes black after Graves bites him. He still has blue eyes though, so the capper is just as sloppily executed as the 80-odd minutes that preceded it.

Graves' presence is a selling point: the very beautiful and promising actress/singer made few film appearances before she abandoned her career at age 27 to devote herself to her religion (she was a devout Jehovah's Witness) and to her ailing mother.  Graves was clearly headed for stardom: she'd already recorded a self-titled debut LP, been a regular on LAUGH-IN and had just landed the starring role in ABC's GET CHRISTIE LOVE! as the prime-time answer to Pam Grier. VAMPIRA was only her second feature film, yet it was also her penultimate one. Sadly, it's not only a lousy showcase for the usually charming Graves, but her performance is off. Given few lines that are even semi-amusing, she overacts, killing potential laughs which are much needed. 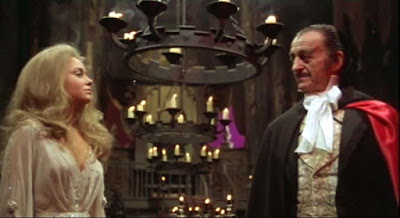 VAMPIRA, or OLD DRACULA (as it was retitled in the U.S. in a forced attempt to cash in on YOUNG FRANKENSTEIN's success) is lifeless dreck no matter how many Playmates or "mod" Halloween parties Donner throws at us. Offensive?  Yes, it is. Niven's change (he really looks embarassed to be in blackface--rightfully so) magically solves every problem, overlooking how he's treated his wife for the entire film. What might be more offensive than the subject matter is the complete waste of talent both in front of and behind the camera.


Is it too corny and obvious to say that Old Dracula sucks? Hey, even that tired line is funnier than most of the jokes in this film. Hard to believe that the same man who wrote and created ARE YOU BEING SERVED? and 'ALLO, 'ALLO! was responsible for this. 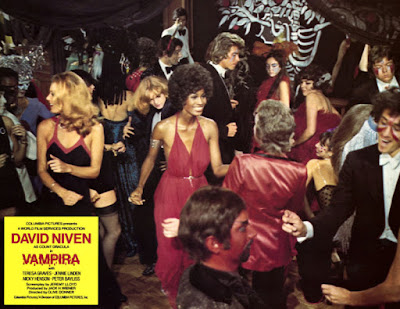 While the intent was to satirize obsession with racial purity, VAMPIRA is too poorly executed to succeed on any level.  Instead of tweaking the Old Count's bigotry and sexism, the film itself comes across as bigoted and sexist.

It is hard for me to work up a case for VAMPIRA. Believe me, the questions I asked above regarding script logic are some of the easier ones. (His entire 'evening stroll' is a headscratcher for nearly 10 full minutes of screen time!) The only real selling point is the opportunity to see some rarely seen stunners of the 1970's. In addition to Graves, Linden and Hayden, Playmates who visit Old Drac's castle include lovely Nigerian model Minah Ogbenyealu Bird (PERCY'S PROGRESS) who, like Graves, died way too young; Scottish blonde Andrea Allan; Hammer honey Veronica Carlson; and, in her debut, STAR TREK III's Cathie Shirriff


I really can't recommend it as a good film, obviously, but if you'd like to see a movie that makes ONCE BITTEN and DRACULA: DEAD AND LOVING IT both look like THE FEARLESS VAMPIRE KILLERS, here's your chance. It occasionally shows up on Retroplex and Indieplex.