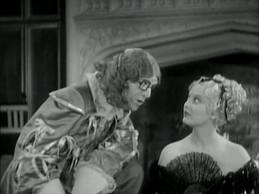 In 16th century England, Wheeler and Woolsey sneak a free carriage ride but end up locked in the village stocks thanks to kleptomaniac Bert, who attempts to steal the coach afterwards. Disguised as a stable boy(!) to escape an arranged marriage with Grieg (the Duke of Weskit), Lee helps the penniless pair escape a vegetable pelting by hiding at the local pub, but Bert’s habit flares up again, forcing the desperate duo into disguises.  Specifically, as personal physicians for the Duke. Complicating matters, Grieg’s niece Todd (already married--to the Baron) takes a shine to Woolsey while Lee’s growing affection for Wheeler threatens to expose her masquerade. 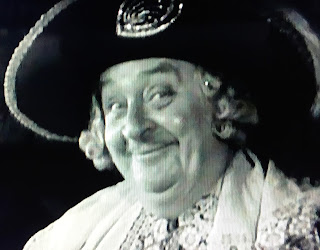 It’s a shame that the Hays Production Code was about to blunt the edge of the sarcastic wise guys known for the era's bluest humor, because CAVALIERS is not only Wheeler and Woolsey's best film, it’s a minor masterpiece.  As I stated while reviewing DIPLOMANIACS a while back, Bert and Bob may not be the Marx Brothers, but their best films hold up solidly. In fact, the side-splitting CAVALIERS is funnier than the Laurel and Hardy period piece (THE DEVIL’S BROTHER, also with Todd) that probably inspired RKO to send W & W back a few centuries. 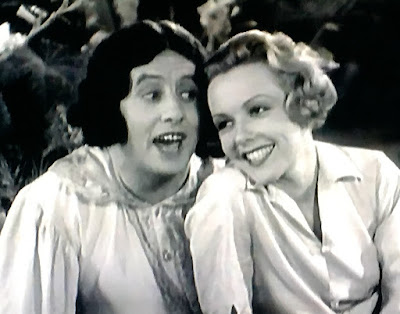 Working with the boys for the second time, Todd is inspired, joining their perennial leading lady Lee to give us two romantic complications to resolve, and the perpetually pained Beery (as the Baron) and lecherous Grieg ("I like 'em young" is his first line) make great foils.

While even the best Wheeler and Woolsey films have their dull spots and a few too many groaners, COCKEYED CAVALIERS is an exception.  Briskly directed by Sandrich (TOP HAT), the film has two memorably amusing and clever songs, “Dilly Dally” and “Big Bad Wolf” and remains fast-paced, clever and consistently funny from the gossipy sing-song opening to the inevitable and wild carriage chase finale. 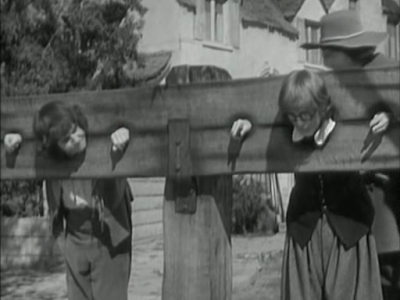 Wheeler and Woolsey lacked the distinctive screen personas of the other leading comedy teams of the 1930’s, and they made clunkers both before (DIXIANA) and after (MUMMY'S BOYS) their 1931-1934 peak.  That said, their current obscurity is due more to bad luck (the aforementioned Code, Woolsey’s untimely death in 1938) than a lack of talent.  COCKEYED CAVALIERS is the best supporting evidence of what they could do with strong material (with DIPLOMANIACS and PEACH-O-RENO not far behind).

It’s too bad the team never again worked with Sandrich, who, like Woolsey, died way too young. His other W & W flick, HIPS, HIPS, HOORAY, wasn't quite as big a creative triumph, but bested CAVALIERS slightly at the box office.  One can only wonder what might have been if RKO had kept Bert and Bob working with Sandrich for a few more films. Instead, they moved on to  a young George Stevens (GIANT) for two films, followed by an ill-advised and ill-fated fusion with short subject specialist Fred Guiol. 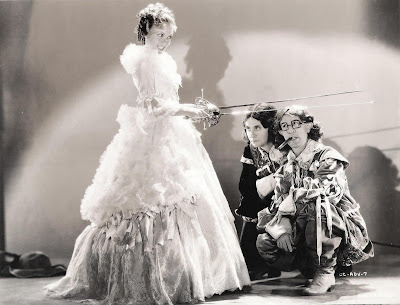 
Warners owns the rights, and the Archive gives us hope, but for the longest time Wheeler and Woolsey have been perhaps the ultimate DVD evaders.  Until very recently only public domain copies of the likes of HOOK, LINE AND SINKER (far from one of their best, and very poor quality typical of PD bootlegs) and DIXIANA (embarrasingly creaky) readily available out of their 21 as a team.  However, this may finally be changing....see next section.

It’s a minor gripe, but this is one film in which Woolsey’s catchphrase, “Whoa-ohh!” is overdone. I counted seven. 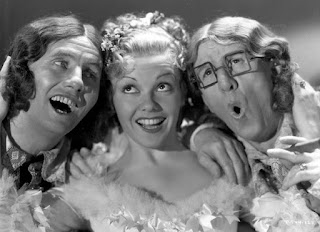 A very well done period comedy, Wheeler and Woolsey’s finest cinematic hour, and yet another reminder of just how sexy AND hilarious Thelma Todd was. I mentioned that I prefer it to DEVIL’S BROTHER, and IMO it’s also funnier than Laurel and Hardy's later BOHEMIAN GIRL. 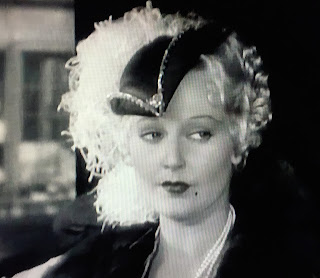 Here’s hoping that the Warner Archive is eventually able to get this one out on DVD: I mean, if MEET THE BARON and SPEAK EASILY (just to name two) are available, there certainly should be room for this one.   As Brian Paige astutely noted in the comments below, Warner has started the long-overdue process of getting W&W's peak period out with the double feature GIRL CRAZY/PEACH O'RENO, the first "official" DVD release.  Hopefully there's a couple more to follow. 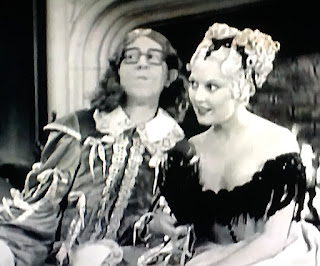 Bottom line, COCKEYED CAVALIERS is one the three funniest films of its year, IMO.  That's high praise considering that the other two are TWENTIETH CENTURY and IT'S A GIFT.
Posted by Hal at 11:24 PM

Cockeyed Cavaliers is certainly in the upper echelon of W & W flicks but I don't know if it's my favorite per se. Peach-O-Reno is awesome and has funnier lines (and Bert's best performance), while Cavs and Cracked Nuts are probably Woolsey's best performances. Hips is probably the most balanced effort.

Perhaps a weakness here is that I just never fully bought Dorothy Lee as a boy?

For what it's worth Peach and Girl Crazy are now on the Archive site as a double bill.

Brian; thanks for the heads up on the PEACH/CRAZY double feature! I've updated the post to reflect this information.

Yeah, Dorothy Lee's disguise was every bit as convincing as Jack Gilford's in A FUNNY THING HAPPENED ON THE WAY TO THE FORUM. :) IMO it was supposed to be ridiculous, but maybe I'm a little too forgiving.

I rate DIPLOMANIACS second, and third is likely PEACH or HOLD 'EM JAIL, though I have yet to watch SO THIS IS AFRICA.

I'm a huge Wheeler & Woolsey fan and hope the Warner Archives see fit to give fans more (a box set of everything - including the various solo films for both RKO and WB) would have been grand. I wish Sony would also release "So This is Africa."

If I had to pick my favorites they would be (in no particular order) "Diplomaniacs," "Hips Hips Hooray," "Hold 'em Jail" and "Cockeyed Cavaliers." I think "Caught Plastered" and "Hook, Line & Sinker" have a lot of great moments, too. Then there are most of the others which are flawed but have a lot of great comedy, and then a small handful of total clinkers in the bunch. But my all-time favorite W&W film puts me in the minority - it is a film that the boys did AFTER the Hays Code restrictions set in: "The Nitwits," directed by George Stevens. I think "The Nitwits" and to some extent the other Stevens-directed film "Kentucky Kernals" prove that W&W could have gone on making funny movies even within the code. "Kernals" to be sure is one that divides folks - many find it cloying while others quite like seeing George "Spanky" McFarland out of his usual element. But facts are facts: "Kernals" was one of the team's highest-grossing films (it might even be their all-time top) and "Nitwits" was among their best reviewed.

Speaking of "The Nitwits," I am working on a blog-to-book project called "Scared Silly: Classic Hollywood Horror-Comedies." I will be reviewing "The Nitwits" as well as the lesser "Mummy's Boys" for that project, with an "horror-onable mention" for "Hook, Line & Sinker" (that one isn't a horror-comedy but there are a couple spooky moments and the basic premise was an inspiration of sort for Abbott & Costello's "Hold That Ghost"). You can chart my progress at http://scaredsillybypaulcastiglia.blogspot.com

PS: "So This is Africa" is also one of my favorites, and great fun, too. The story of how it was chopped to ribbons is legendary and yet it still holds up as a wild & crazy flick.

W & W's problem post code was not that they didn't make the transition, it's that RKO wrecked them with the incompetent Fred Guiol, who basically tanked their careers by 1936 (though I actually sorta like Rainmakers). I think they could have definitely had a resurgence at another studio, but they mainly needed to get away from RKO.

The big problem W & W faced going forward is Wheeler's persona. By the end of their films Bert was 42 years old. How much longer could he have played the juvenile lead that sings, dances, and gets the girl? I think that's why he never had much of a film career after Woolsey died. What do you do with a 40 something Bert Wheeler as a solo screen star? Woolsey was much more the pure comedian that could always have the glasses, cigar, and bad suits.

I agree 100% the Guiol was the wrong guy for the job. His W&W's are tough to get through.

As for Woolsey, that's a very good point and a very real issue - how an actor can portray the goofy innocent into middle age - and one that faced such greats as Stan Laurel and Lou Costello as well. I guess proof of the pitfalls of continuing in that type of character can be seen in the later works of Lucille Ball and Jerry Lewis. I think that Bert may have found a way to adjust had Woolsey lived and the team gone on, but even if Woolsey had lived I'm not sure how far into Abbott & Costello's reign they would have survived. Olsen & Johnson managed to co-exist with Abbott & Costello in the '40s by being so far off the beaten path that they were considered unique and set apart from Bud & Lou. Anyway, thank you for reviewing Bert & Bob's works - they are much deserving of a wider audience!

Pardon me - I meant to write "As for Wheeler" - sorry about that...

I think Wheeler would have had a tougher time than Laurel or Costello actually. Those guys were rarely ever supposed to be actual leading men in their films, while Wheeler's persona was like a vaudeville lunatic mixed with Dick Powell circa 1933.

I have a theory that W & W might have ended up in O & J's spot at Universal. As in they would have left Hollywood for Broadway, maybe starred in a show like Hellzapoppin, then gone back for another round in Hollywood in the 40s.

As a great UK fan of W&W I find it sad that the majority of their films that get listed on DVD are very poor quality transfers which in some cases also suffer from overzealous so-called digital enhancement which usually means all details have been lost in oversaturated whites and undersaturated blacks which leave little of the original picture intact. Some examples are so bad that it's not possible to recognise peoples faces unless in close-up.

Luckily - good quality versions were released by Turner Home Entertainment as part of the RKO Classic Collection on NTSC laserdiscs.

I don't know if there were other tittles in this series as I have not been able to find a comprehensive list and my request for more information to the Turner organisation was ignored.

Anyone reading this probably knows by now that Cockeyed Cavaliers is part of the new W & W Vol. 2 set from Warner Archive. I can't be the only one who finds the lineup of the set somehow lacking. They shouldn't have put out all of that other stuff by itself, or at least put that Peach/Girl Crazy double bill on the set as well. Imagine how strong of a set it could be if it was Cavs, Cuckoos, Peach, Girl Crazy, Diplomaniacs, Dixiana, etc.