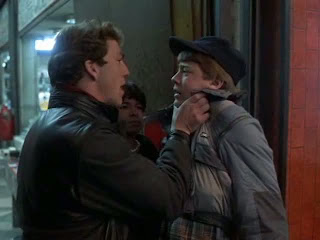 
Fifteen year old Pennsylvanian Douglas runs away from his mother (Cassidy) and stepfather (Ackroyd) and takes the bus to New York.  His money doesn’t last long and he ends up in Times Square, potential prey to flesh peddlers or, if he's luckier, drug dealers.  Given this choice, Douglas joins Brooklyn counterpart Nucci in working for Rollins' cocaine selling Leopards.  Meanwhile Cassidy races against time to find her son.

The cautionary tale for teens was a TV-movie staple throughout the Seventies and Eighties from 1971’s MR. AND MRS. BO JO JONES to 1988’s SHATTERED INNOCENCE. CHILDREN OF TIMES SQUARE is a cut above the norm, thanks largely to director/writer Curtis Hanson.  In his only telefilm to date, the future Oscar winner (L.A. CONFIDENTIAL) does a fine job establishing the seediness of the locale and fleshing out his youthful characters. Feeling unwanted is Douglas' motivation: his father abused him and Ackroyd is nonplussed to inherit the task of raising a teenager.  Refreshingly, Douglas is no angel--he smokes pot, leaves his infant half brother unattended to go to a concert, and steals money from his mother’s purse.  Ironically street life gives him the responsibility he lacked at home; he becomes arguably Rollins' most conscientious and hard working peddler. 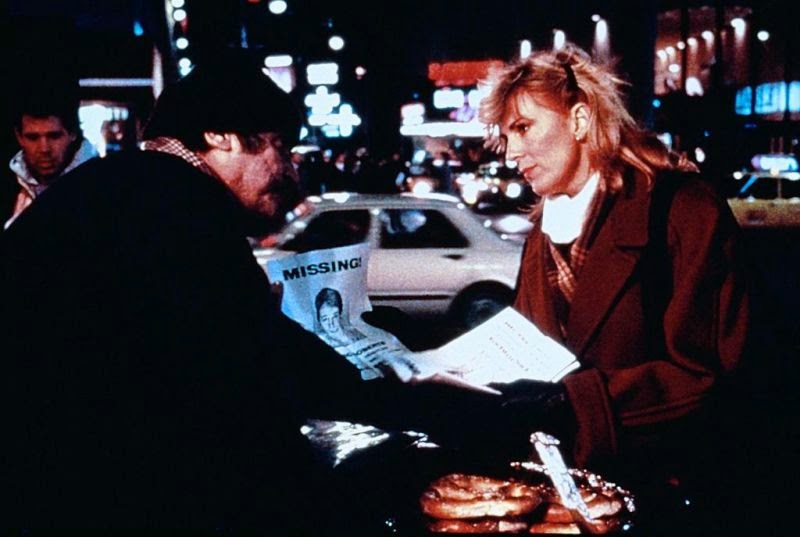 While Douglas sees the Leopards as a means to survive, Nucci simply wants to help to his hard-luck, overworked mother Gallardo.  Hanson's script also provides plausible backstories for hard luck streetwalker Oringer and Rollins' street leader, Scott.  Then 24, the latter is convincing playing a character nearly a decade younger and very effective in a role far different from his comedic turns in FEAR OF A BLACK HAT and the REVENGE OF THE NERDS series. 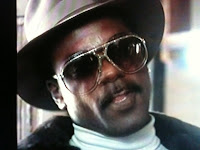 The late Rollins (so memorable in RAGTIME and FOR US THE LIVING) was also given a chance to play against type here as the Faginesque adult (blink and you'll miss: one of his deliveries is to a "C. Dickens"), but unfortunately he turns in an uneven performance in THE CHILDREN OF TIMES SQUARE.  At times he's suitably menacing, but in other moments that call for subtlety that (i.e. reassuring a Leopard after a beating and robbery, the firing of "sucker" Callahan) he's as theatrical as Michael Caine in ON DEADLY GROUND and temporarily brings in the cheese factor Hanson was trying to avoid.  This notwithstanding, the film stays afloat until the final quarter, when the script requires Rollins' character to take chances that he's been established as being far too intelligent to risk, in the name of giving us a happy (network imposed?) ending.

It isn't the definitive film on the subject (that would be 1984's heartbreaking documentary STREETWISE, also sorely missing from DVD), but CHILDREN OF TIMES SQUARE is probably about the best TV Movie possible about street runaways.

Made for TV movies about social issues from the "three network" era tended to age quickly (i.e. the Times Square presented here was gone less than a decade later) and usually need a big current 'name' for DVD release.  In this case, the biggest name (since Rollins is no longer with us) is behind the camera and his last hit was 8 MILE in 2002. 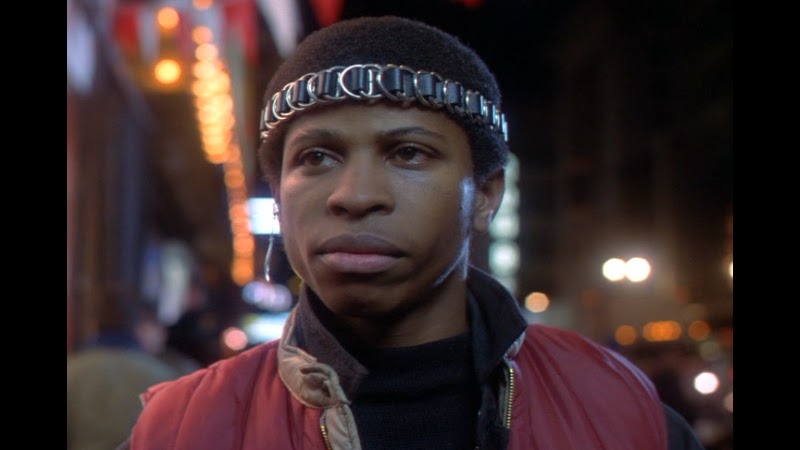 It would make a fitting twofer in tandem with the aforementioned STREETWISE (one of the most glaring omissions of the 1980's IMO, and a future review here) and there's admirable talent involved here on both sides of the camera.  Douglas, a familiar face who had few opportunities to carry a film, makes the most of this one.


Hanson's upcoming TOO BIG TO FAIL will be his first made for TV movie since CHILDREN OF TIMES SQUARE, which is currently available at Netflix Instant.
Posted by Hal at 9:14 PM

It's not Howard Rollins as Scott, it's Larry B Scott. Rollins was older, in his thirties, and plays one of the adults.

Hi George:
Actually it states "Rollins' street leader, Scott". I use the actor's names instead of the character names (Otis and Skater respectively) in this review.