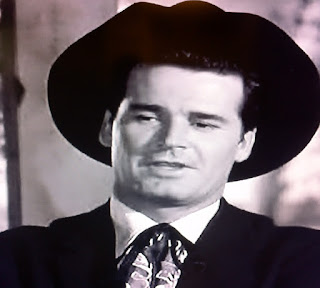 
On route to a high stakes poker game in Leadville, Bret Maverick detours to Sundown to visit his old friend Jed Christianson.  A wealthy rancher and widower who is recovering from a leg injury, Jed has a bigger concern than his temporary disability.  Jed's daughter Carrie is dating gunslinger Hardigan, a man the elder Christianson disapproves of.  Maverick only plans to be in town a few days, but Jed wants Bret to extend his stay--and in the process, show Carrie "what a real man is like". 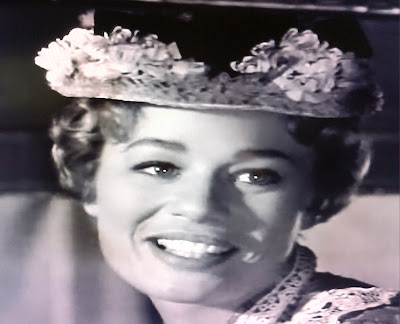 To sweeten the pot for Bret, Jed first bankrolls Maverick in the local game, then resorts to a bet on a (rigged) game of Maverick Solitaire to keep his friend around a bit longer.  After Hardigan senses competition from the stranger in town, he tries bullying Bret, eventually starting a fistfight that the traveling poker player wins decisively.  Both end up with bandaged hands, but Red challenges the Bret to a decisive gunfight once that shootin' hand is healed. 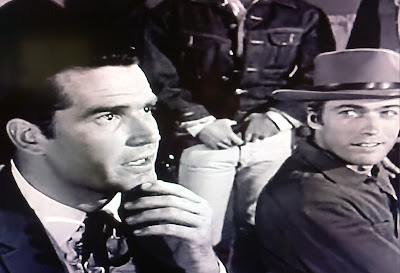 One of the series' most legendary episodes, Duel at Sundown has a number of similarities to the earlier Holiday at Hollow Rock (also written by Browne). In both, Bret visits a wealthy, trusted older friend and finds himself in the middle of a romantic triangle involving his friend's daughter and an unworthy suitor who is only after her for her father's money.  But said boyfriend is the sheriff and has father's full courtin' approval in the former segment, while Sundown's Jed Christianson wants to break up his daughter's relationship with Red, a "bully and a coward". 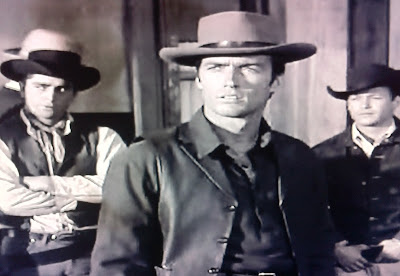 Ironically, Maverick and Hardigan are both ne'er-do-wells on the surface: Bret even notes that financially they're "starting out even" when Carrie (who's on to her father's scheme) gives her suspected (and incorrect) reason why her intended lacks parental approval.  Maverick talks cowardly, but (reluctantly) steps up when the chips are down; Hardigan does exactly the reverse.  Red's no dummy, but poker player Bret's skill at reading people (Hardigan tells us he "never plays cards") is his big edge.  Bret knows he'll be shot or sucker punched when Red menaces him at the table a second time, so he throws the first punch while still seated at the table and uses the element of surprise to disarm Hardigan while his adversary is still stunned. 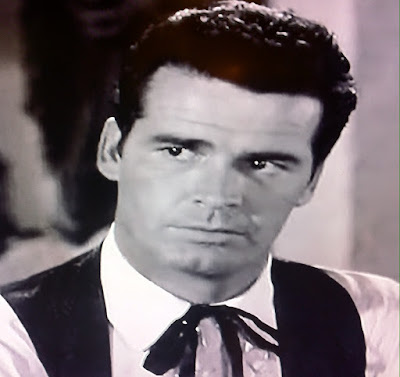 Mr. Christianson is a bit of a rascal, but he's also a straight shooter, admitting that he wouldn't be disappointed to have Maverick for a son-in-law.  It's easy to see why the rancher and Bret get along so well--unlike the freeloading, truly greedy (and unfaithful) Hardigan, Maverick makes his own way.  Though Bret sheepishly admits that it sometimes "frightens him" what he'll do for money, it's most notable what he won't do: marry for it.  Contrary to his implication to Carrie that "breathing" is the only thing he puts ahead of money, it's pretty clear that freedom outranks it as well--and is probably ahead of breathing itself, truth be told.   Duel at Sundown has as many character-defining lines as any MAVERICK teleplay--it's a shame that it was Collins' only contribution to the series.

Doctor Baxter is an intriguing character for Dan Sheridan, making his fourth and final MAVERICK his best.  As Sundown's (poker-playing) physician and undertaker, Baxter has the confidence of Jed, Bret and Red.  The Doctor's true feelings are clear from his priceless background reactions during the fistfight, and it's no surprise to learn that he is in on Maverick's ruse (which involves yet another timely assist from Bart).  The bald Irish character actor passed away in 1963; he was only 47.  Edgar Buchanan made five MAVERICK appearances in all, but this was his only appearance as Christianson.  Just as well, since it couldn't have been topped.  Linda Lawson appears as Red's secret squeeze, and Myrna Fahey (A Flock of Trouble) plays Carrie's BFF.

The star attraction, of course, is young Clint Eastwood, mere months away from TV stardom in his own right.  He lives up to Jed's assessment, using Maverick's name like an ice pick ("Maver-ACK") to alternately goad and intimidate the newcomer.  That is, as long as Red is sure he can win the shootout.  (No doubt he followed this same pattern with the "two men he's killed" previously.) When a sudden turn of events leads Hardigan to question the inevitability of said win, he quietly leaves--Maverick's second perfect read on his adversary.   Also Red's second misjudgement of his rival.  Pappy's wisdom on the game's virtues looks wiser with each episode.  Maybe Mister Hardi-GAN should consider learning to play after all. 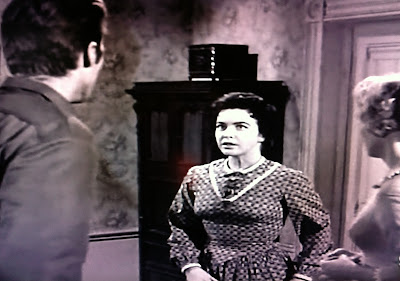 Bret's friends in Sundown have almost as happy an ending as his friends in Hollow Rock (Carrie doesn't have her Mr. Right yet), but our traveling poker player is far from altruistic in either circumstance; his closing remark to Jed implies that the subterfuge was motivated at least in part by that final $1,000 sweetener.  And unlike Sunny Acres, the Mavericks aren't exactly leaving Sundown a better place than they found it.  The unintended consequence of their titular performance?  It brings a very angry John Wesley Hardin to Sundown in their wake. 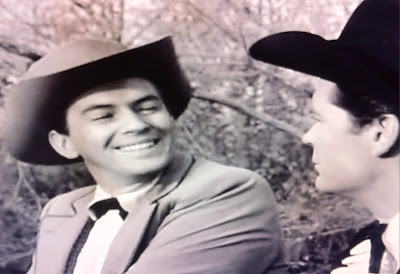 Bret initially wins $180 at the game in town, splitting it 50/50 with backer Jed, and then wins a $400 pot after that just prior to his fistfight with Hardigan (we only see the last $20 bet).  Bart doesn't have time to grab a seat, settling for an even split of Bret's $1,000 bankroll boost from his bet with Jed.  So assuming half of that pot was profit, and the original agreement was satisfied by that time, Bret makes $790 ($290 at the tables) and Bart $500 that we know of. 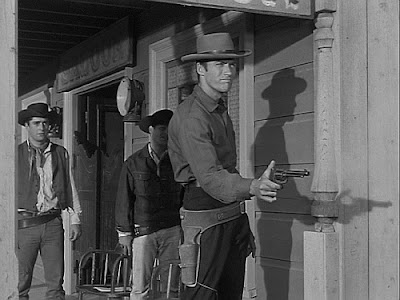 A long-winded but series-defining pearl.  "When I was six years old, my Pappy took my brother and me into a saloon.  They were playin' Red Dog, Chuck-a-Luck, and Wheel of Chance.  Son, he said, this is what's called gambling.  Stay away from it.  Games like this, you don't stand a chance.  As long as you live, stick to poker." 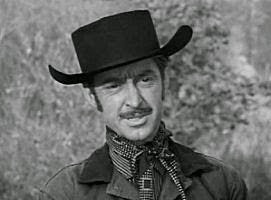 Thanks to a very strong supporting cast highlighted by the participation of a young Clint Eastwood, Duel at Sundown ranks with Gun-Shy and Shady Deal at Sunny Acres among the best known and loved MAVERICK installments.  Deservedly so, though I'd place it slightly behind those almost flawless creations--all things equal, I'd say it's a tossup whether I'd choose Duel ahead of the aforementioned (and highly underrated) Holiday at Hollow Rock.  Duel at Sundown still comes highly recommended: chock full of witty dialogue and boasting perhaps the series' greatest "tag" ever.   (***1/2 out of four)

Another great MAVERICK analysis. I love your work on this great show, and this is a top five episode, easily. Eastwood's star quality shines through, but he doesn't outshine the boys.

Unpopular opinion but honestly I was underwhelmed by this episode. Granted it is fun to see Clint Eastwood in an early role (and I love how he says Maverick), the solution and endings is also great and very Classic Maverick but I felt the episode was a bit slow in getting there. Not a bad episode but I wonder if it would be as fondly remembered if not for its famous guest star.

Max: thanks! I just started your film novelization as well. :) For me, I have about 15 contenders for my Maverick top 5, a testament to just how great the show is. I think my top 5 constantly changes. :)

Kim: thanks also! If I had a quibble with it, it was that Bret really seemed to be taking a BIG chance (as Jed acknowledged). It was like the Columbo ep when he trapped the magician with the guillotine trick; it sure took a LOT of confidence in his read to go through with it. But then again, $1,000 was a lot of money to a guy whose bankroll was less than $80 when he rolled into Sundown, and as Pappy said, the only thing more important than money is "more money". :-)