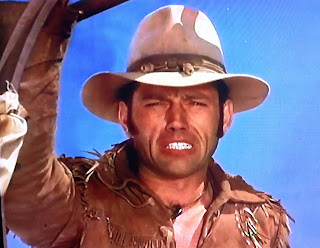 "Your lives are meaningless compared to Hondo!"-- II


After securing an agreement from his former father-in-law (and current Apache Chief) Vittoro to meet and talk treaty with the army, Hondo Lane discovers a couple being massacred by renegades on his way back from the scouting assignment.  Hondo and Buffalo capture and interrogate the lone surviving attacker and learn that his leader is Hondo's old rival Silva, who regards the officially recognized Chief with disdain. 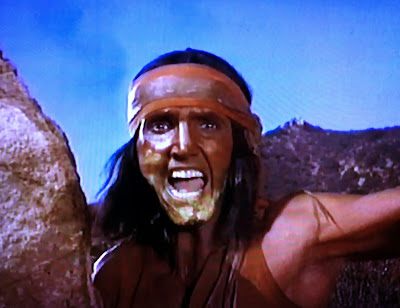 Silva plans to attack Gallagher's mine next, which would not only scuttle peace plans, but could start a full scale war.  Captain Richards is unconvinced of Vittoro's innocence and skeptical that the Chief will keep his word despite Hondo's assurances.  Meanwhile, newly widowed Angie Dow deals with the loss of her husband and having to tell her son what has happened to his father. 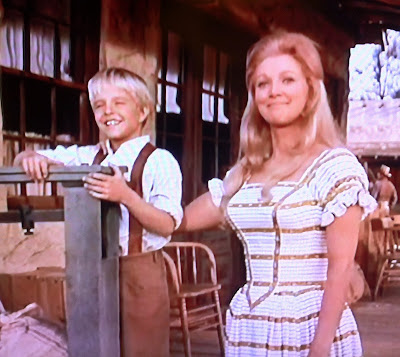 Hondo and the War Cry picks up shortly after Hondo and the Eagle Claw left off (the two episodes were re-edited and released as the feature film HONDO AND THE APACHES overseas).   With the titular hero's past and motives fully explained in Hondo and the Eagle Claw, it's the newly appointed Captain's turn in this continuation.  Richards bluntly admits favoring "extermination over conciliation".  The reason for his bitterness is similar to Hondo's: the Captain's older brother, Major Addison Richards, was "butchered" by Indians. 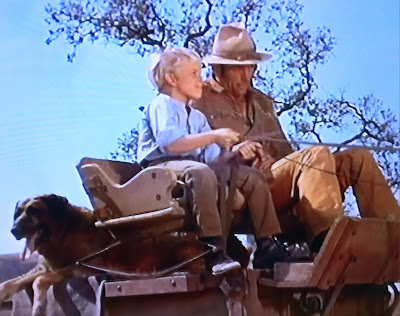 With Lane challenging the Captain and offering the Apache point of view ("Who started this problem?  Whose real estate is this?"), Fenady's intriguing setup is fully in place.  Three men are starting new assignments--Richards (Fort C.O.), Lane (freshly hired scout) and Vittoro (Chief).  Each man is emotionally damaged by losing someone very close (brother, wife and only daughter respectively) to the other side during the Apache Wars, yet tasked with leaving the past behind and working together to chart a peaceful future.

Ironically, for all the uneasy Army/Apache alliances, it is the head renegade's lack of faith in his former Chief that threatens to topple all the dominoes.  Silva survived his blood rite with Hondo in the opener, but remains a thorn in the side of both Richards and Vittoro by leading the insurgency against both.  Captain Richards pragmatically notes that when all is said and done, Vittoro is just "one man from one tribe". 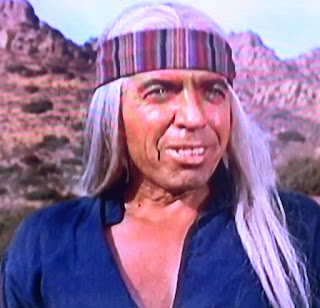 After impressively restaging that blood rite in Hondo and the Eagle Claw, Fenady provides a variation on another memorable sequence from the 1953 film: the "walk around him" scene.  In the original, it's Ed Lowe (Leo Gordon) who calls Sam a 'cur' for blocking a doorway, but wary of incurring his wrath (or Hondo's), eventually takes the advice. Ed Dow is already pushing up daisies, so in Hondo and the War Cry we have a mouthy cattlemen (THE HIGH CHAPARRAL'S Don Collier) insulting Sam and Hondo ("hey, Buckskin!") in the cantina and threatening to shoot the canine unless he moves. 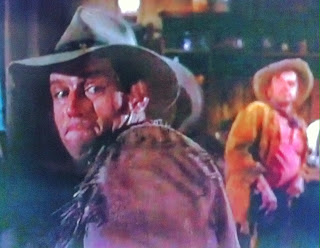 Wayne's Hondo resolved the standoff peacefully with quiet intimidation; Taeger's Lane takes action.  His attempt to call Sam over is pretty half-hearted, but this isn't really another instance of Emberato living up to his Apache name ("bad temper")--these cowpokes all but beg for what's coming to them.  Gratuitous or not, the extra action isn't unwelcome in this more introspective second segment.  The fistfight also gives Buffalo a chance to steal his fellow scout's beer (if not the scene itself). 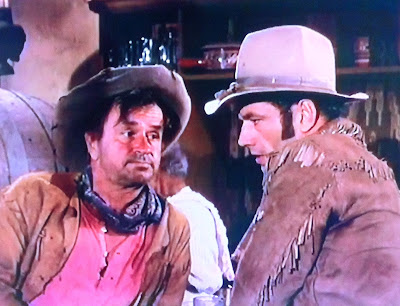 A later vignette epitomizes the thanklessness of Hondo's new task. On his way back from a delivery of supplies, the scout catches Krantz and a friend bullying a twelve year old Apache boy (played by Michael Pate's 14 year old son Christopher) on a rite of passage.  Hondo lets them off with a warning shot--not only taking it easy on them himself, but also (unbeknownst to the bullies) saving them from Vittoro--and several warriors with him trailing the youngster from a distance.  Lane's repayment for this courtesy?  The Tribolet employees complain to Richards about Hondo's actions.  Oh well, it is better than the thanks Lane received from Ed Dow for saving the Mrs.

Speaking of Angie Dow, she too knows "there's good and bad on both sides."  Surprisingly, Angie admits that she didn't love her late husband, marrying him before she really knew him.  Angie is intrigued by the tight-lipped scout, and little Johnny Dow bonds with Hondo and Sam immediately.  Still, the widow has to at least consider the attractive offer for her store from freighting magnate Tribolet.  Ever-laconic Lane doesn't interfere: "I never tell anybody what to do."  As will be seen in later segments (i.e. Hondo and the Gladiators), sometimes Hondo is non-committal to a fault. 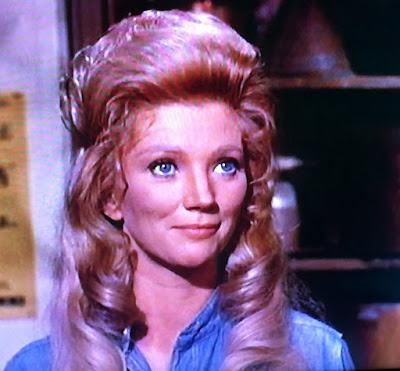 WHO'S THE REAL HERO HERE?

The show may bear Lane's first name, but Vittoro is the right place at the right time to save his son in law for the second episode in a row.  In addition, Johnny Dow seems positively awed to meet the Chief. 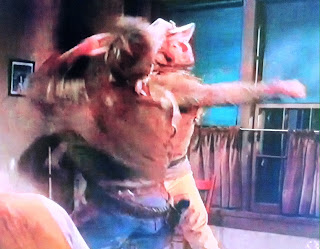 In the teaser, Hondo silences two of the renegades who attacked a wagon unassisted--as he puts it, they "won't be in for breakfast".  That was with his gun, though.  With his fists, Emberato notches four kayos in the cantina.  First, the aforementioned cattle punchers, then the subtly villainous Tribolet and henchman Krantz go down for the count from the same left cross.

It hosts two of Hondo's TKOs during Hondo and the War Cry, and three tables and a chair bite the dust.  Ever think Hondo would get barred from the place if he wasn't buying most of Buffalo's drinks? 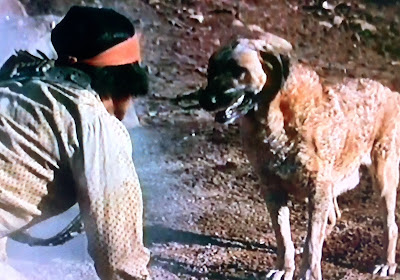 Sam's aforementioned refusal to move from the doorway is his showcase scene (which was filmed specifically for this episode, apart from the pilot feature), but he gets another pivotal moment when he blocks a tomahawk wielding renegade from rejoining the battle.  Great job--but I doubt that'll get you any table scraps, Sam!

More leisurely paced than the opener, with its emphasis on development of supporting characters and tying up a few loose ends, but Hondo and the War Cry is no less effective, finishing a strong two-part introduction.  In the Fenady canon, the series is a logical progression from THE REBEL and BRANDED, as both shows followed a drifting veteran after the Civil War.   HONDO examines what happens once the loner finally stops wandering.  Nicely developed two-parter by the producer, establishing a wide range of possibilities for Lane's subsequent adventures.  (*** out of four)


HONDO: THE COMPLETE SERIES is streaming at Warner Archive Instant.
Posted by Hal at 4:30 PM