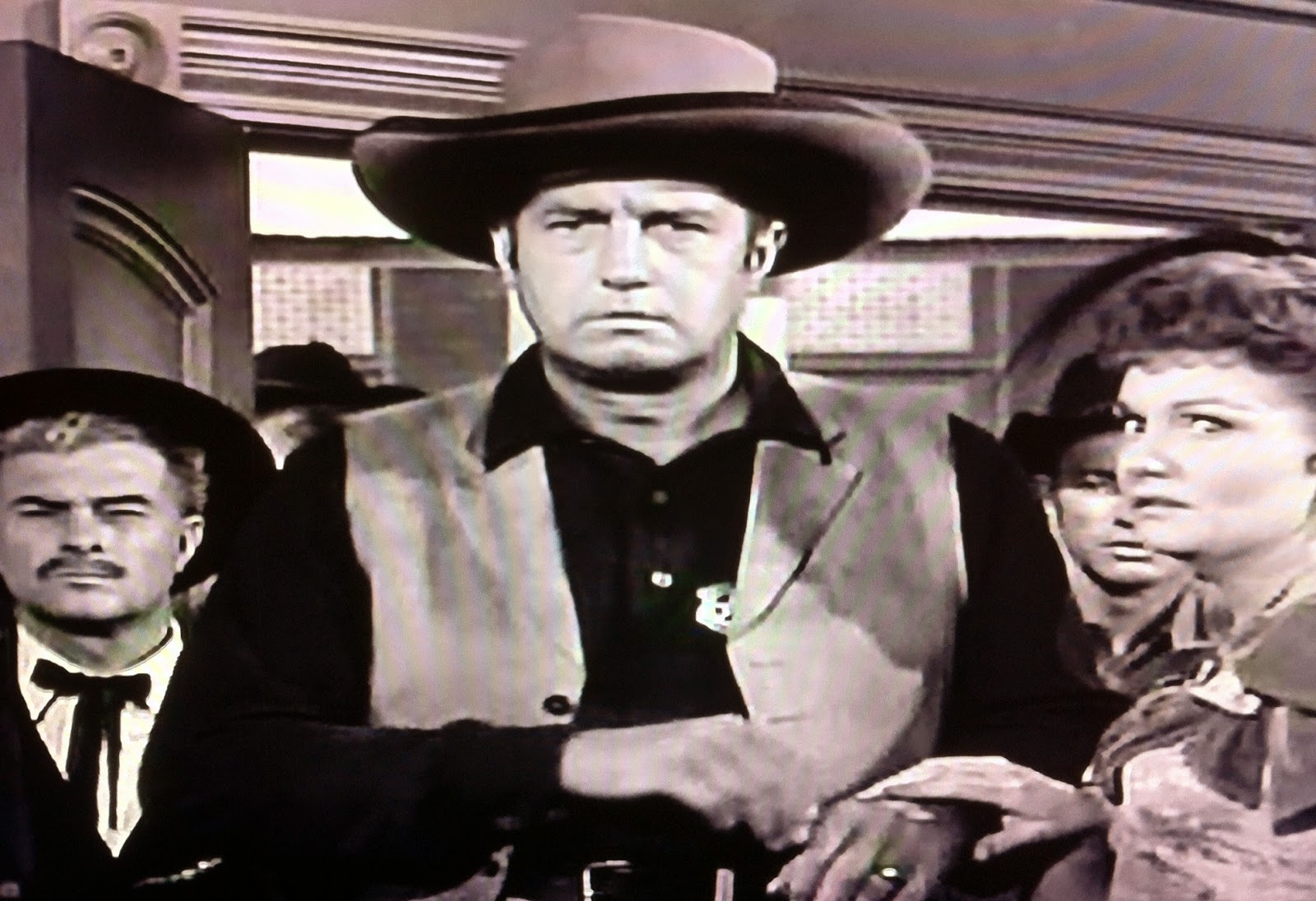 Ellwood, Kansas is a peaceful town, kept that way by towering Marshal Mort Dooley.  Bret Maverick is brought there by the same thing attracting Hawkins, Badger and (apparently) Adams: a buried treasure.  Half a million dollars in gold to be exact, hidden in Ellwood during the Civil War by a now-deceased Confederate officer.  Unfortunately for Maverick, his competitors lack the formidable obstacle that he faces: Dooley's intense dislike of professional gamblin' men. 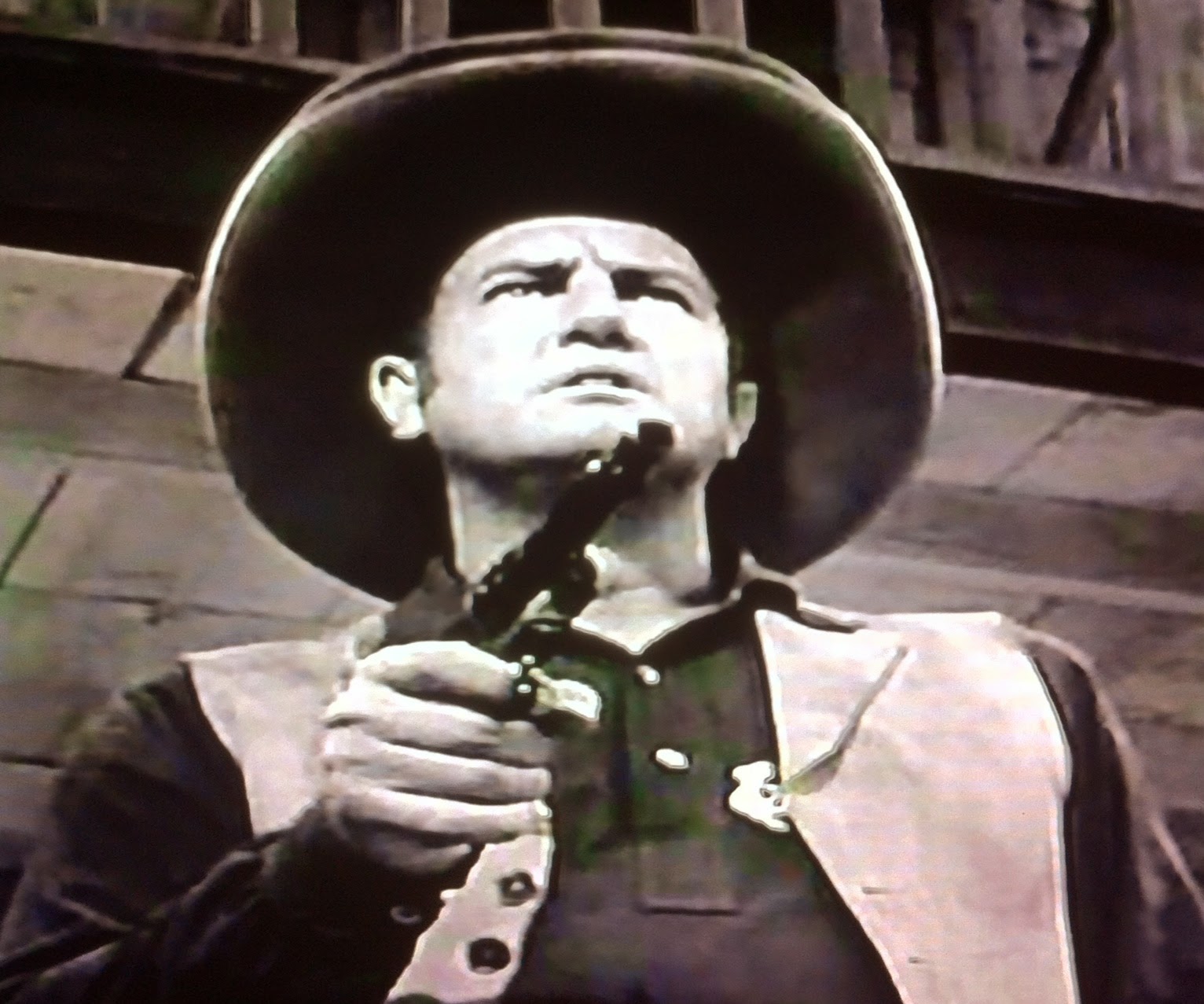 Determined to "uphold the law" and protect the trail hands "just lookin' for a friendly game" in the saloon, the Marshal sees Bret off on the noon stage just as conman Hawkins arrives.  Bret protests to no avail, and Dooley makes it clear that a return to Ellwood will put Bret on a collision course with the 6'6" Marshal.  You'd think Pappy's advice would probably be avoidance, since Dooley has sent 11 no-good scoundrels to Boot Hill in the past month alone.  But $500,000 is a lot of money--the only thing more important than money, right Pappy?

Series creator Roy Huggins did some re-writes on MAVERICK's first and best outright parody, but the finished product still bears the skewed stamp of Marion Hargrove.  If the title doesn't make it clear that spoofing GUNSMOKE will be the primary focus, the voice-over narration that opens Gun-Shy will, since it comes not from Bret Maverick, but from Marshal Dooley. 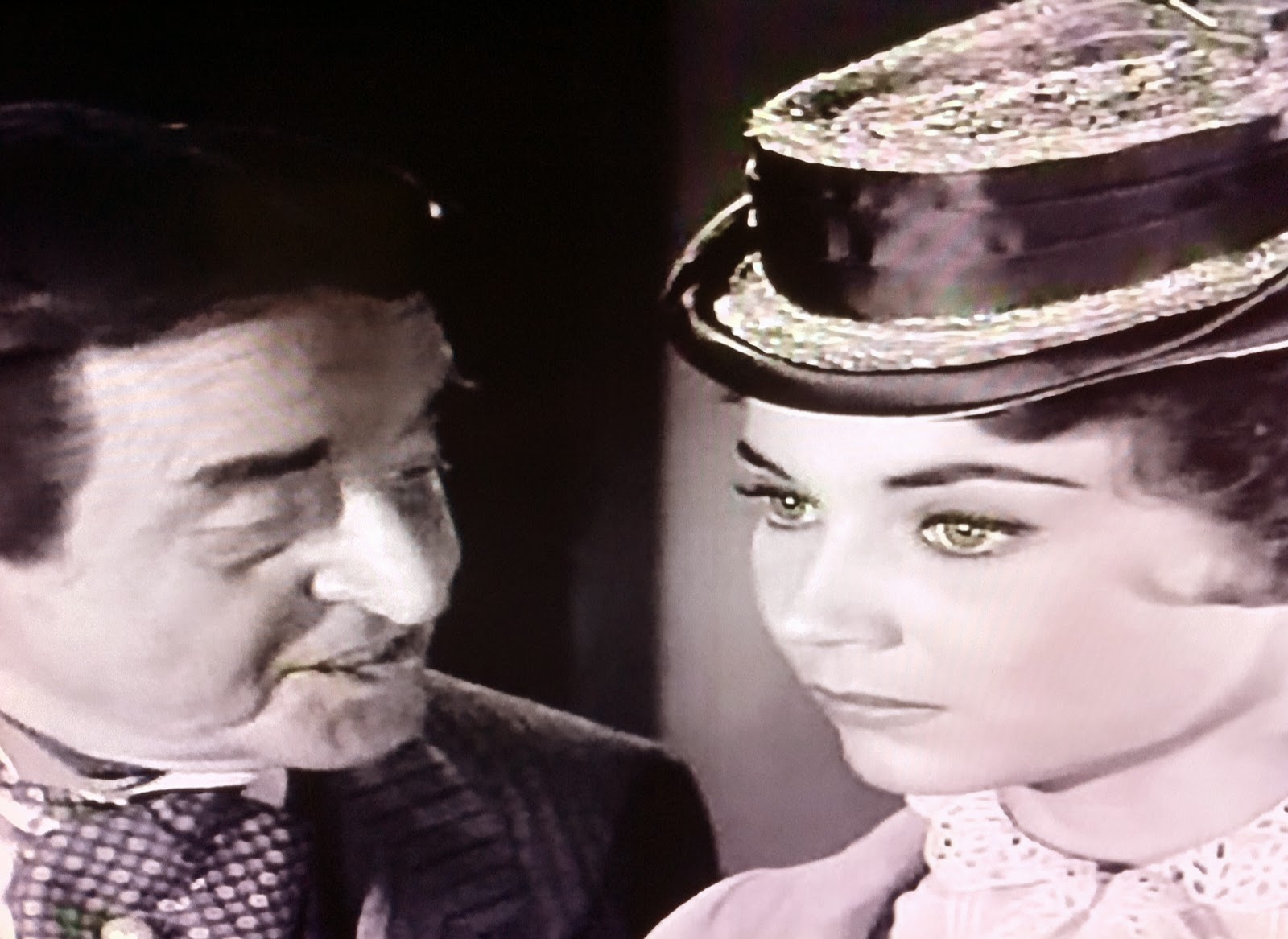 Dooley is a wonderful creation from Hargrove's subtly sick mind.  Underneath the sturdy surface, the Marshal is corrupt, power-mad and thickheaded.  Proud owner (he mentions this repeatedly) of "37.5 percent" of the Weeping Willow Saloon, his vision of law and order is a pure reflection of his financial interests.  Town drunks aren't thrown out of the saloon, but rather assisted right back inside--as long as they still have money to spend.  Naturally, Bret is going to be doubly unwelcome: he's not only a teetotaler, but one who's likely to win a great deal of drinking money and take it right out of Ellwood's economy before moseyin' along.  This Marshal is ready to shoot Bret dead for merely "flauntin' authority"--no crime yet committed.  Dooley's stated reason for going up to Boot Hill isn't contemplation---it's "to get ahead a grave or two"! 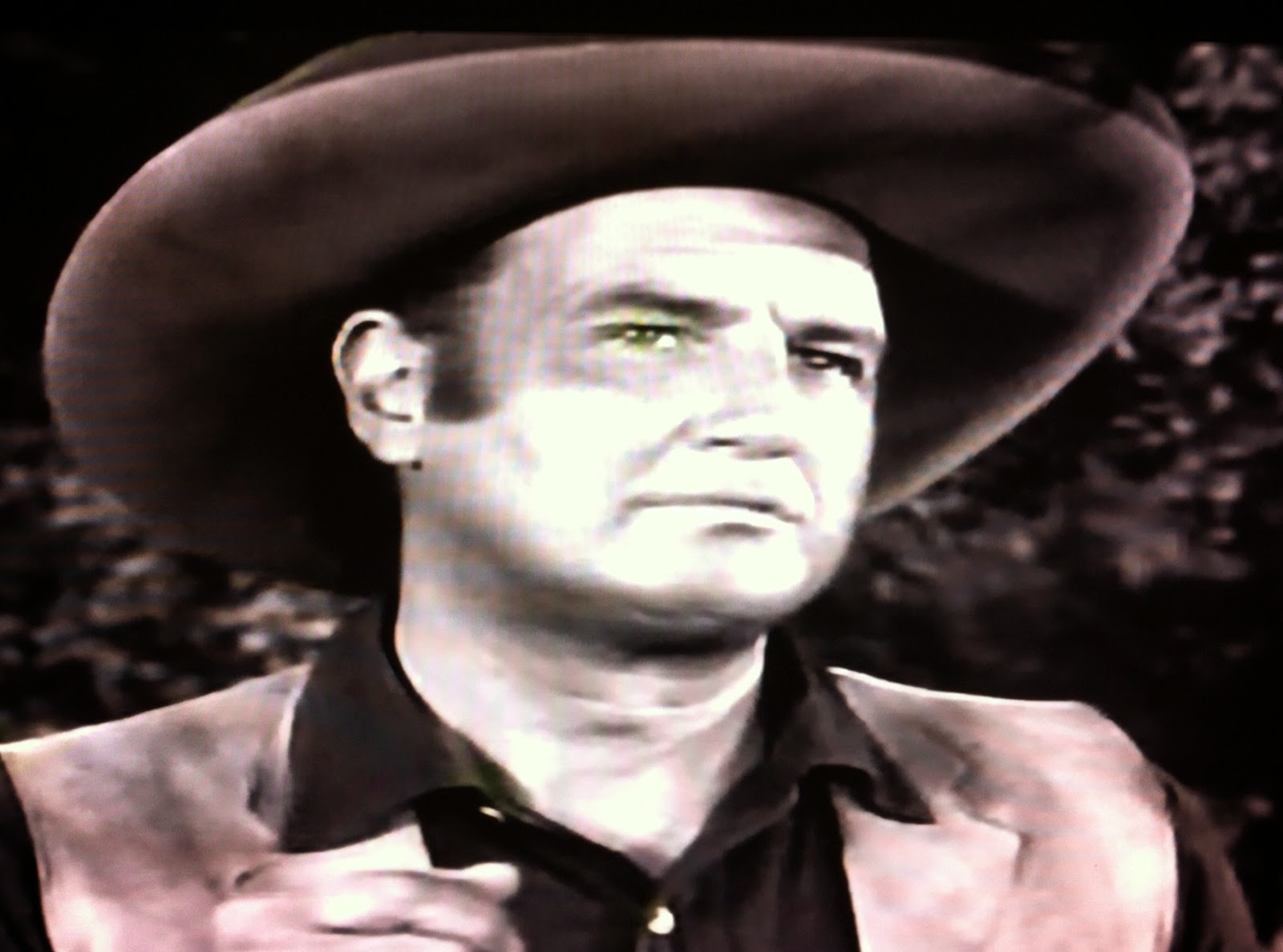 And did I mention he's thickheaded?  We see literally nothing but miscalculations from Dooley: Hawkins' character, the source of Ellwood's street vandalism, and (in the best-remembered scene) the range of his six-shooter.  The one correct deduction by a lawman--that Bret is a poker pro--comes from Deputy Clyde.  Such power vested in one man as doltish as this Marshal would be frightening, if not so hilarious.

While Ellwood's locals steal the show right down to the aforementioned narration (which Bret amusingly reclaims for one brief announcement midway through), the finished script is impressively balanced, with the search for gold just as engaging and enjoyable as the spoof.   British character actor Owen was previously seen in Hargrove's The Belcastle Brand, and is clearly enjoying himself playing the windbag conman who appears to be a step ahead of Bret as he charms the locals (while Bret can't, no matter how hard he tries).  Gage Clarke is also amusing as the nervous salesman who lets greed get the best of him; he would return for a much larger and more memorable part in Greenbacks, Unlimited, Garner's penultimate episode. 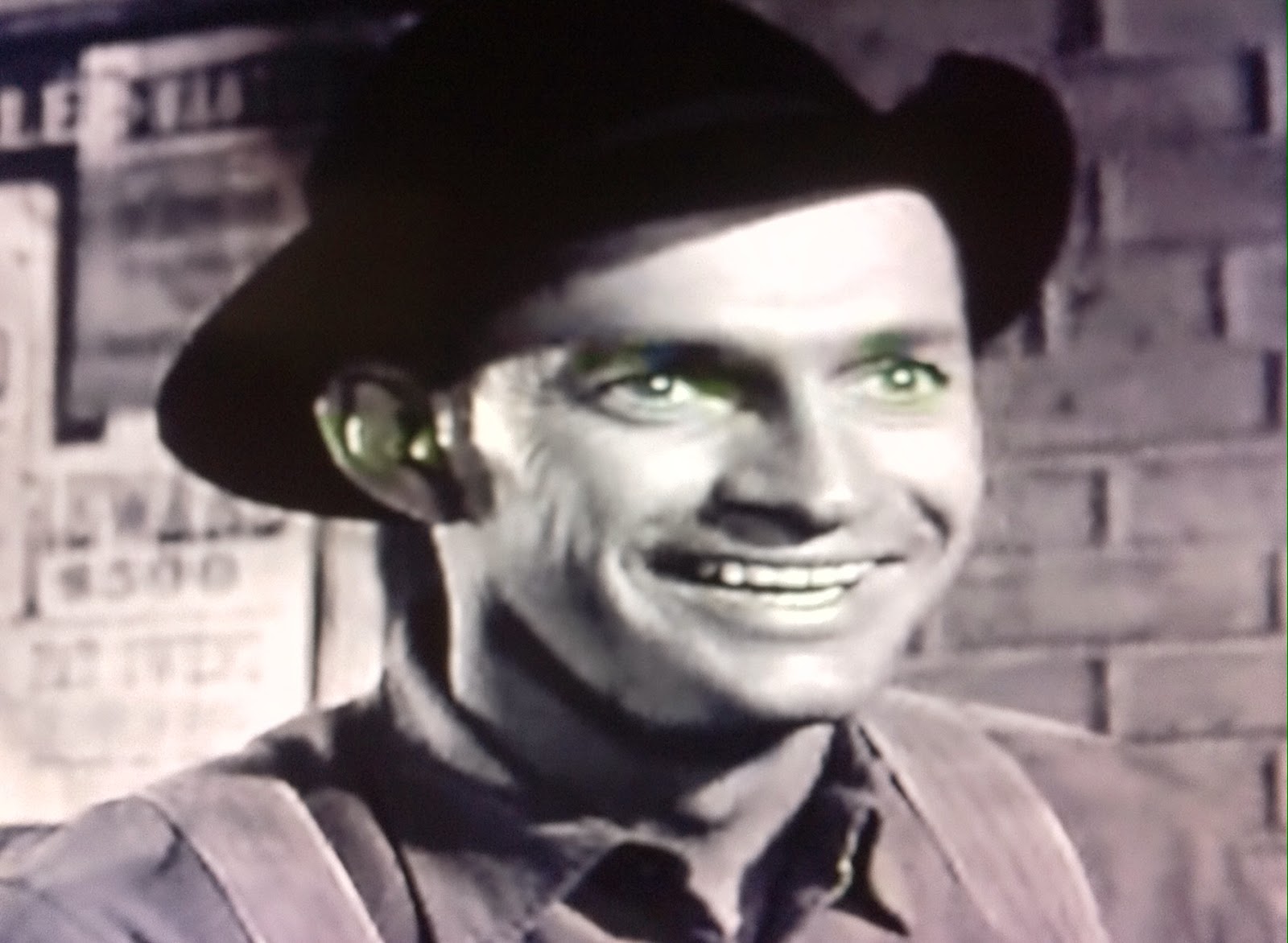 As for Garner, he's flawless as usual, but upstaged by superb portrayals of the GUNSMOKE doppelgangers by Edmiston and Gage.  A voice actor for over half a century, Edmiston does a terrific job (the explanation for his limp is a beaut) but it's Gage's stone-faced James Arness impression that really drives Gun-Shy home.  At 6'6", Gage is a mere inch shorter than the GUNSMOKE star, and he's otherwise uncanny, nailing Arness' cadence and gait.  His stone-faced, rock-brained portrayal of Dooley anticipates the POLICE SQUAD!-era Frank Drebin--minus the competence at police work. 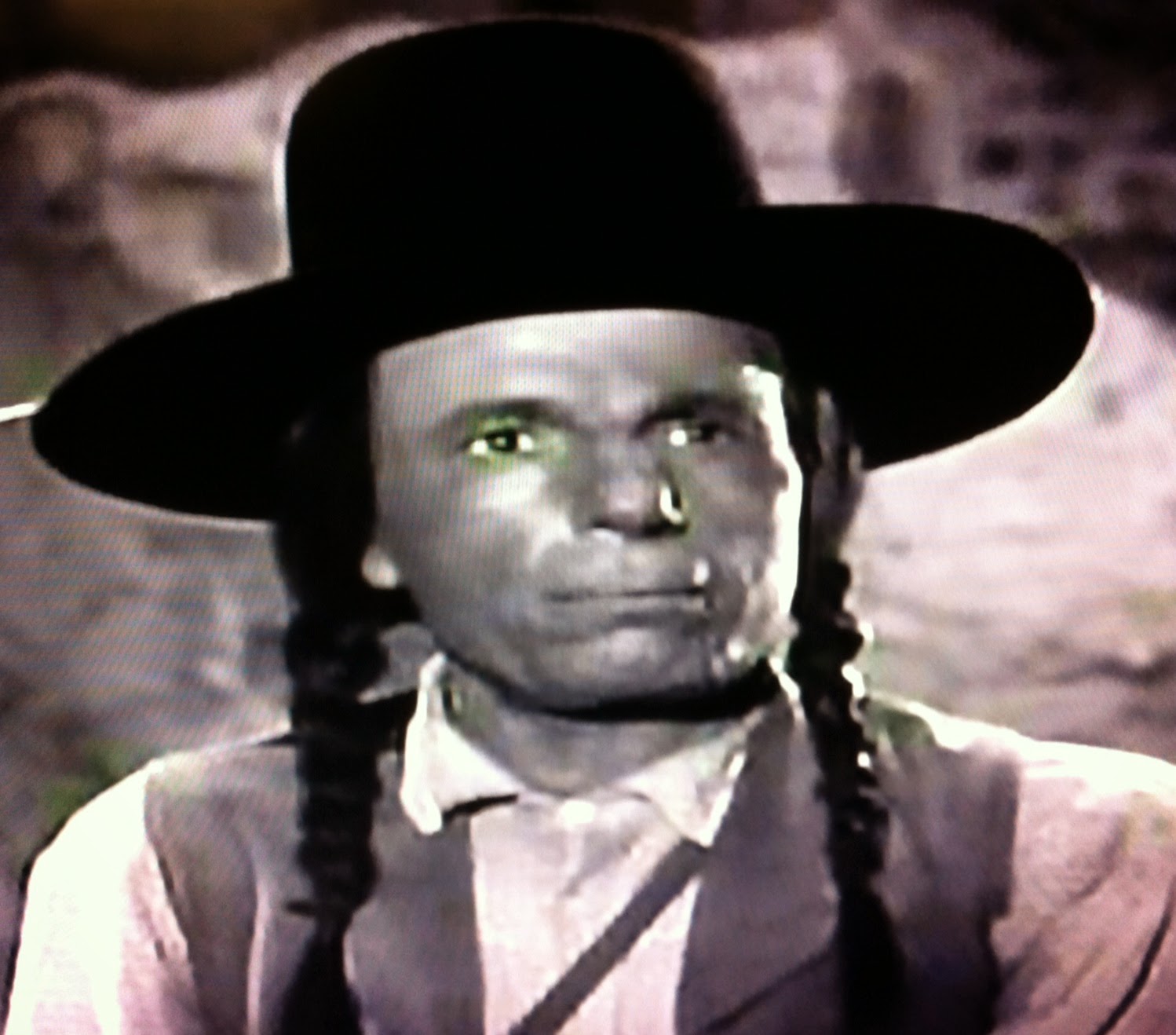 Gage's performance was so popular he was brought back to parody Matt Dillon in three more MAVERICK episodes after Coles Trapnell took over as producer.  However, none of these followups approached the magic or hilarity of Gun-Shy, since each one had his character either grudgingly helping or being outright allied with Maverick.  Aping Arness wasn't funny by itself--being such an irrational adversary while doing so is what made Gage's Mort Dooley work so well. 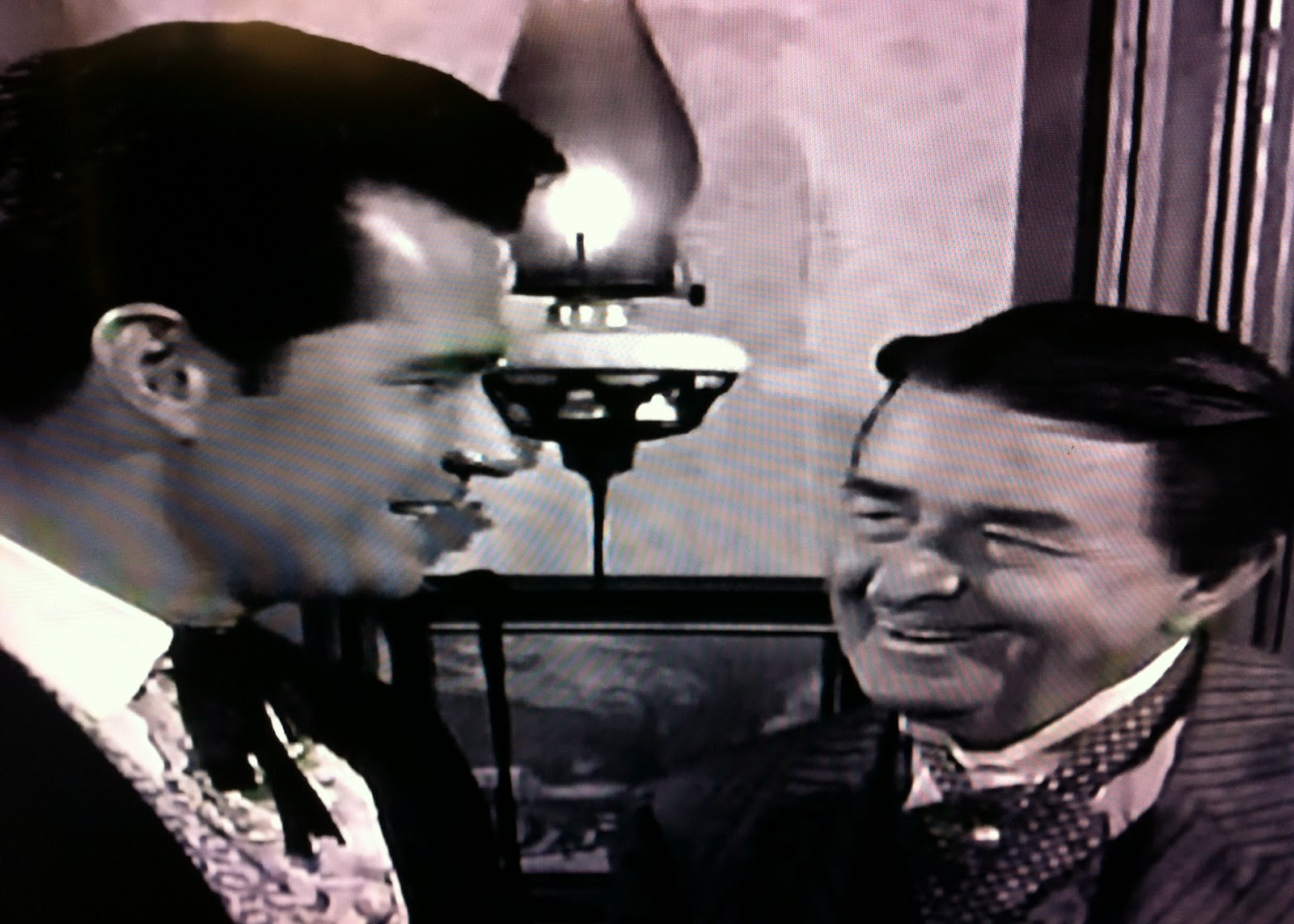 Since this lampoon arrived only three years into GUNSMOKE's twenty year CBS run, some of the trademarks punctured by Martinson and Hargrove will be lost on those viewers more familiar with the iconic western's later years--a minor defect, if one at all.  Gun-Shy remains genial, right up to and including the atypical (for Bret) conclusion.  In it, Maverick reveals that he intentionally gave the Marshal a chance to save face by "turnin' out to be as yellow as the others".  Ever-smiling Hawkins chides Maverick for his sentimentality: Dooley is just the kind of power abuser that Bret normally brings down (i.e. Shady Deal at Sunny Acres, Holiday at Hollow Rock), albeit a much dimmer bulb.  All in all though, Gun-Shy is about as flawless an installment as you'll find in episodic television.

Well, he was sittin' there at the Weeping Willow Saloon in his clean, white shirt and black necktie and he was winnin' an undisclosed amount until the Marshal put him on the next stage.  Since it's the only game in town and Marshal Dooley is plurality owner, Bret was off the tables for the rest of Gun-Shy. 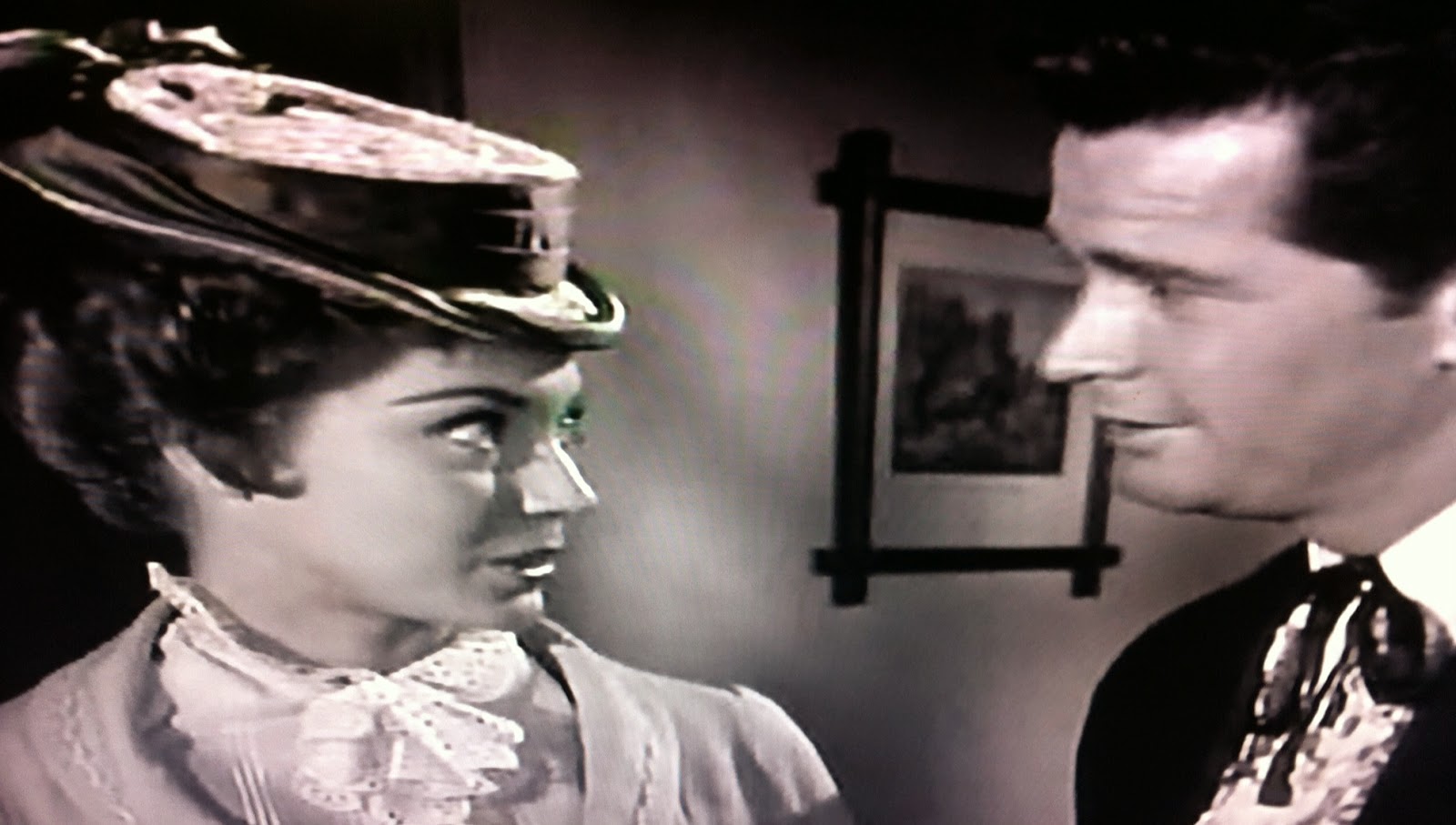 Whether Huggins improved Hargrove's original script is always going to be open for debate, but one cannot deny the quality of the finished product.  Or that this episode's popularity is more than justified.  Expertly written, directed and acted, Gun-Shy is proof that a western parody need not be broad to succeed.  If it isn't MAVERICK's finest hour, it isn't far off.  (**** out of four)


MAVERICK currently airs daily at 1 PM Central/2 PM Eastern without commercial interruption on Encore Westerns, and at 10 AM Central/11 AM Eastern on COZI TV.

Huggins supposedly didn't like this episode, but I would rate it right after SHADY DEAL AT SUNNY ACRES. I loved this as a kid and love it now. Another expert write-up. ("People's Choice" commentary also good!)

Great post on one of my fave episodes. Justly famous!