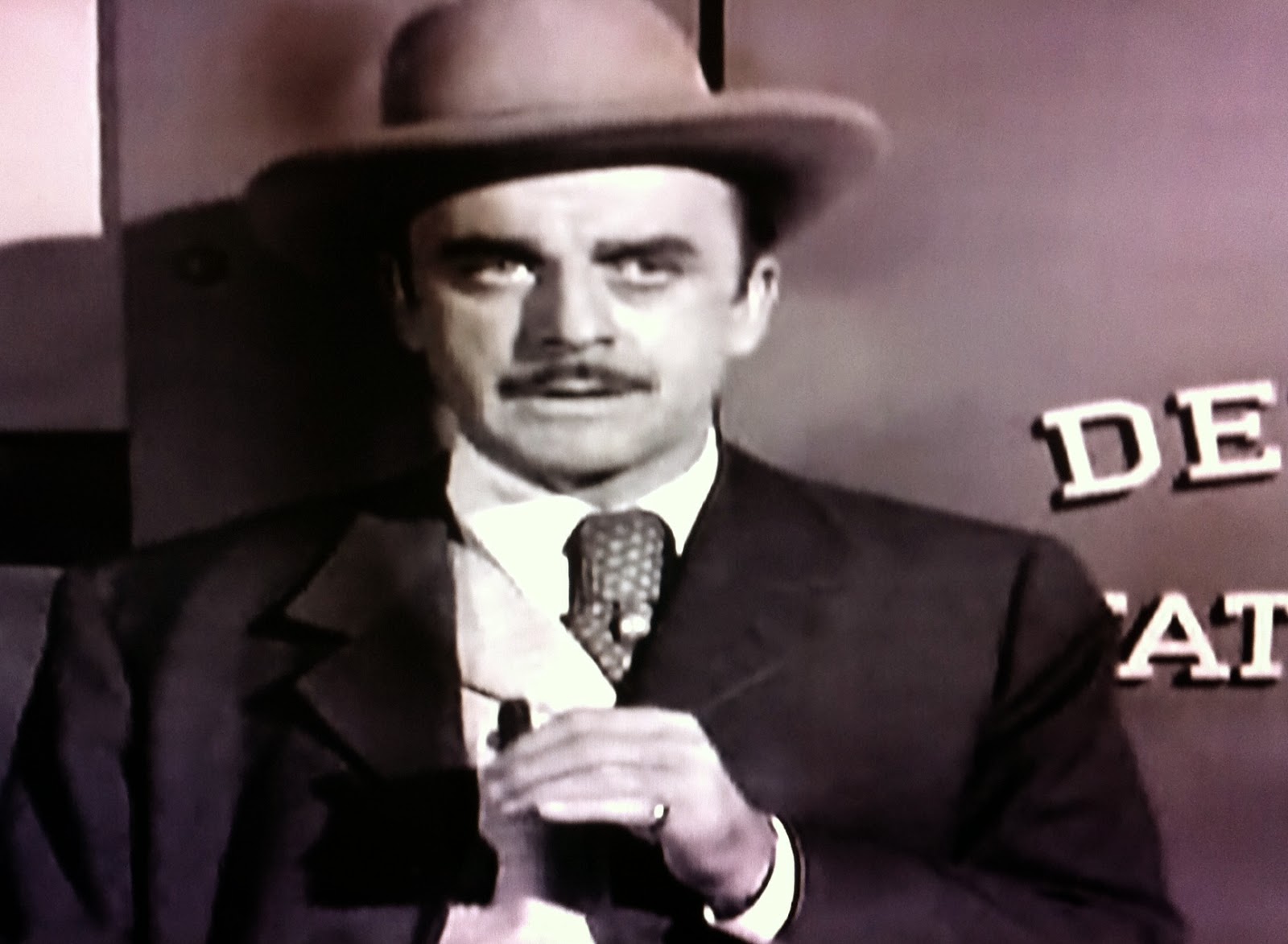 
After Tamblyn "borrows" Bret's horse and the territorial Marshal wires a request for help, Maverick finds himself going back to Denver instead of his intended trip to Kansas City.  Once Bret arrives, he learns the reason his assistance is sought.  An expert safecracker from the East (who we will later learn is Murphy) is on his way to rob the Denver State Bank with two accomplices, and president Dutton is offering Bret a $1,000 reward plus expenses to sniff out the criminals: names and appearances both unknown.  The only known fact about the cracksman: he's also an avid poker player. 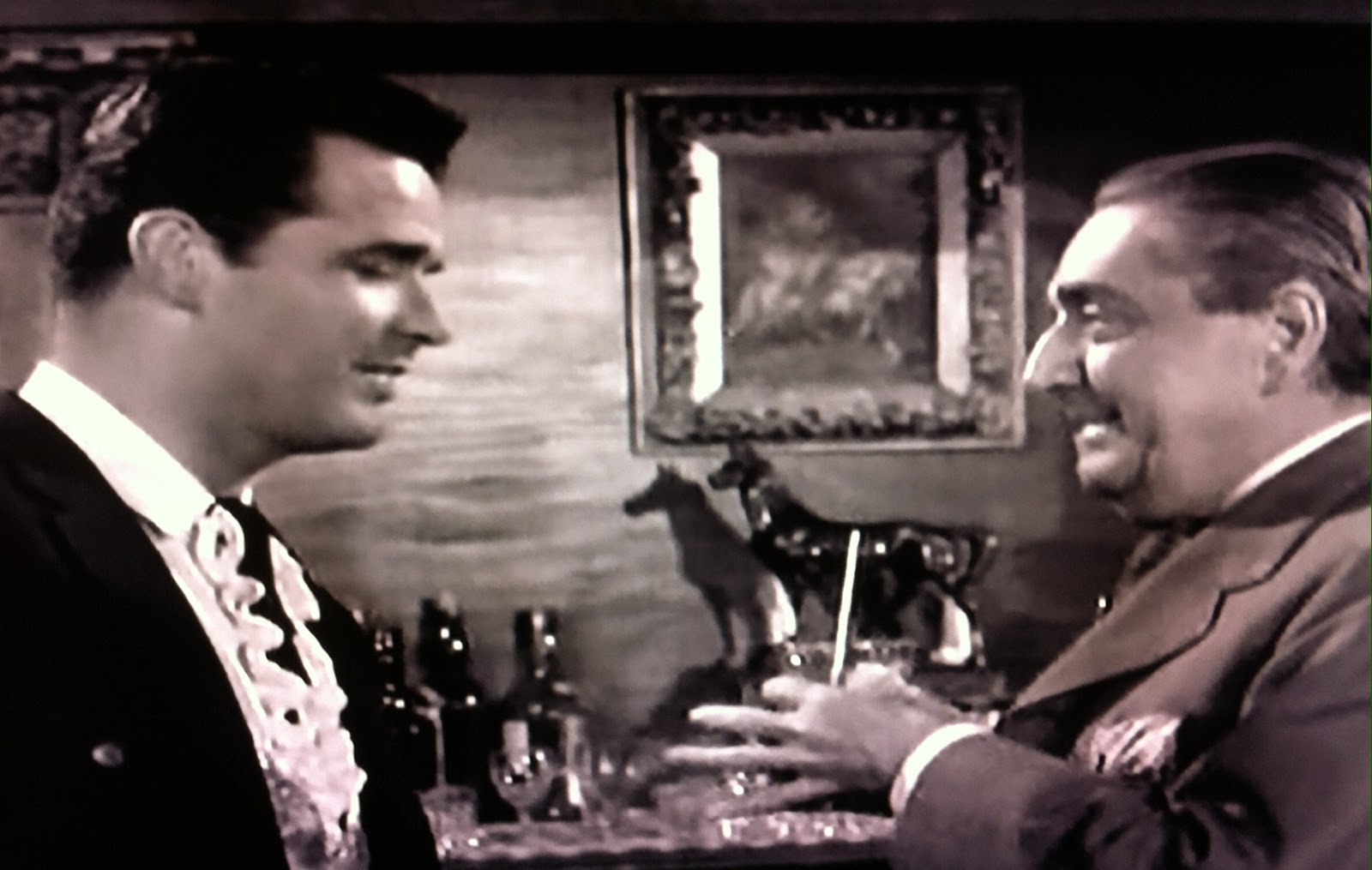 Before Bret can scour the casino, he bumps into his old Texas friend Farley, a jack of all trades who mastered none.  That is, until he took up bricklaying, and completed his work for the Denver State Bank.  This job resulted in an unlimited bankroll for blackjack, thanks to a secret passageway to the vault that only Farley (who created it, and stresses that all of his 'loans' are paid in full) knows about.  Naturally, a successful robbery by Murphy would end the successful side venture and likely lead to Foursquare facing charges, so he too needs Bret's help. 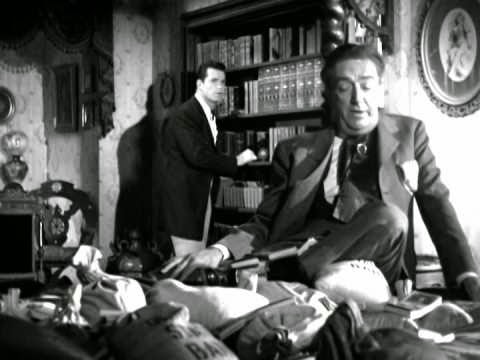 It's a little contrived for Foursquare's house to be adjacent to the bank, but if you can get past that, Greenbacks, Unlimited is a frequently hilarious cat-and-mouse game concocted by Robert Vincent Wright (The People's Friend).  By this time (the final episode of Coles Trapnell's debut season and the show's 79th overall), surprising veteran MAVERICK viewers was becoming a challenge for the new producer's creative team.  Wright was up to the task. 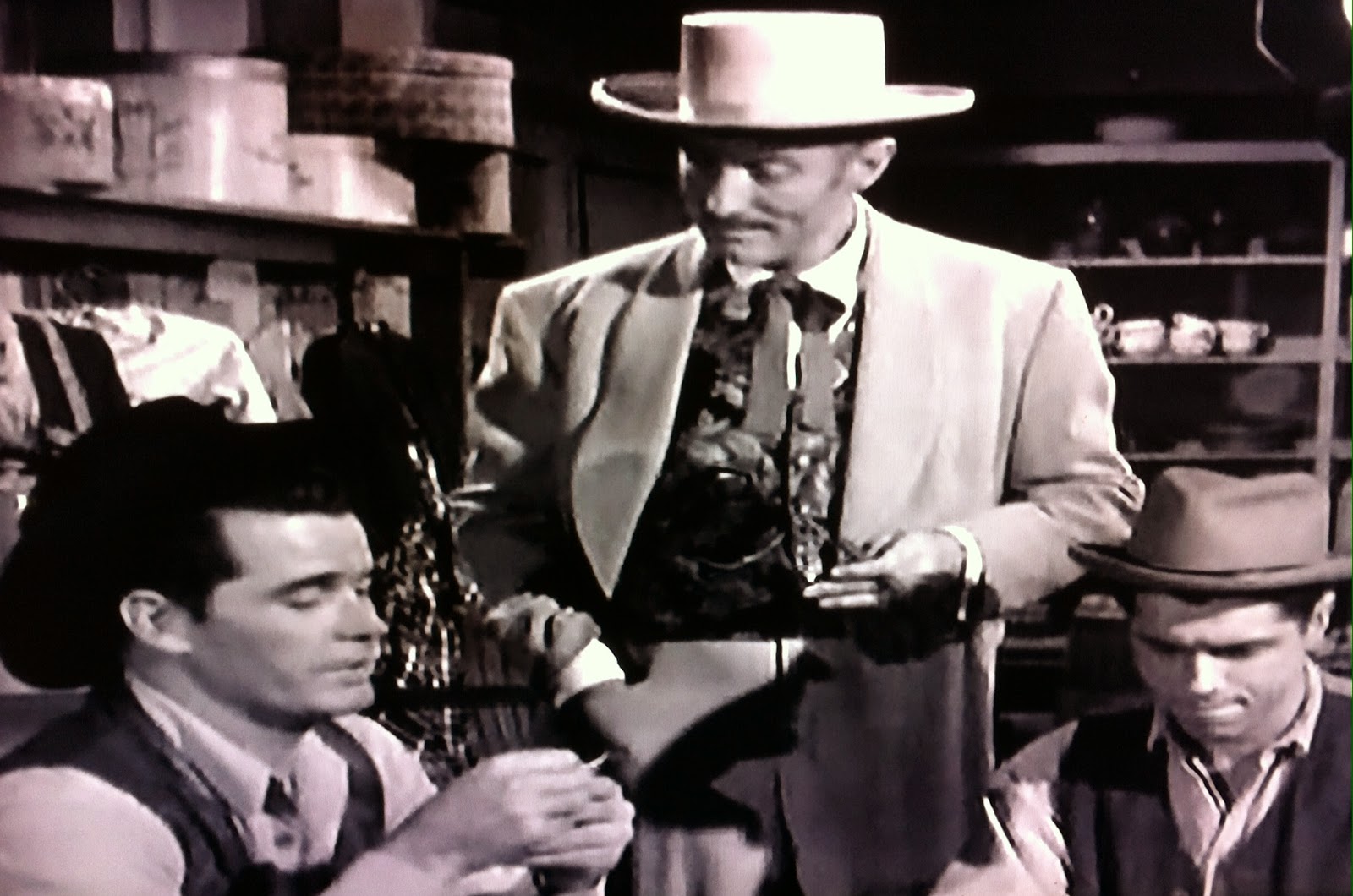 Wright gives us immediate misdirection with the loss of Bret's horse being a minor inconvenience instead of the expected focus of his trip.  Wright then takes his time, methodically unraveling the true plot.  Nearly half of the episode has passed before we actually meet "Big Ed" Murphy and his partners.  In a real rarity for the series' middle years, there's nary a femme fatale to be found: in fact, Greenbacks, Unlimited doesn't have one credited actress.  Just this lady who wordlessly strolls through the casino once: 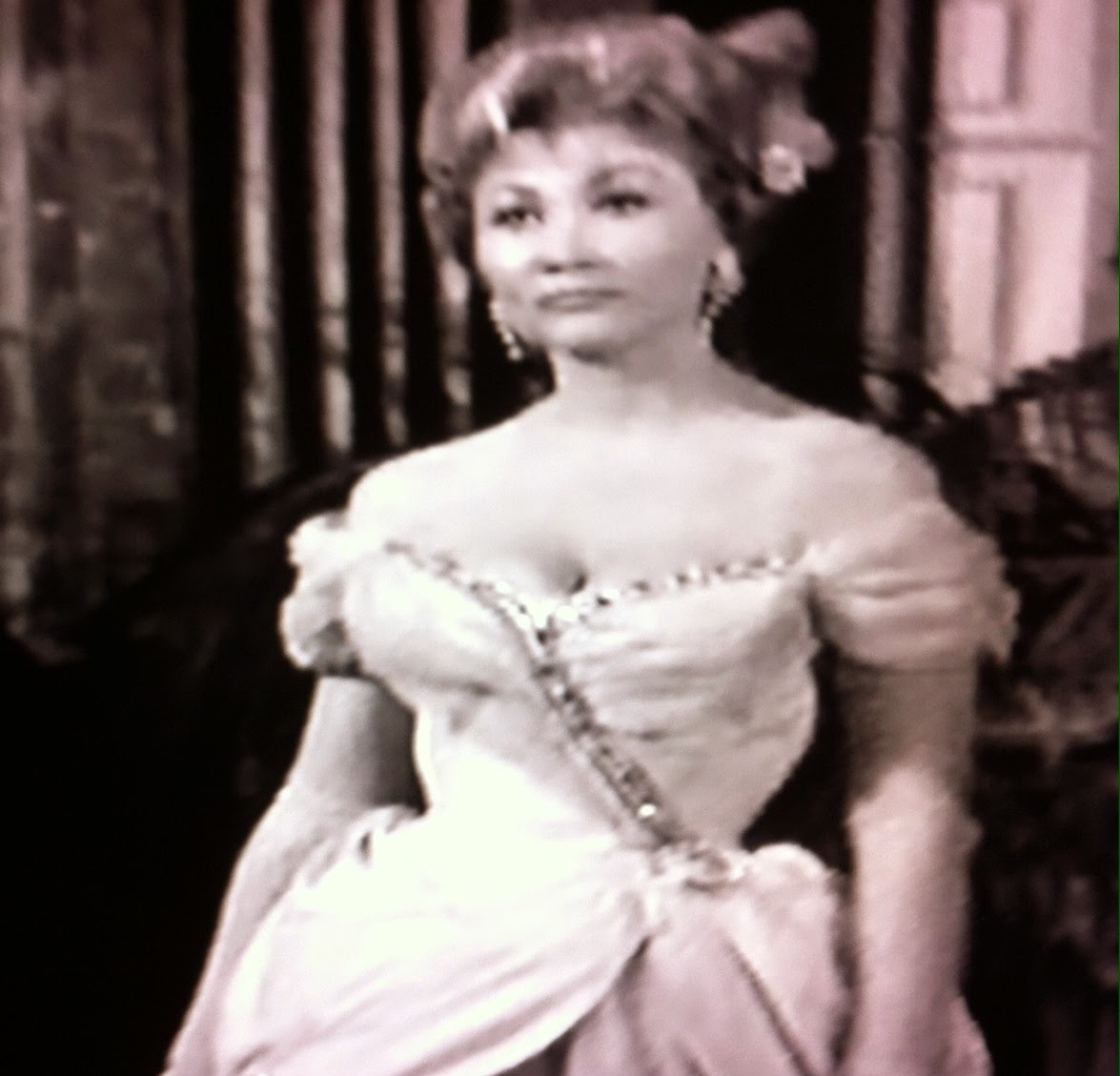 In addition to Wright and Lubin (who directed ten of Season Three's 27 installments), Garner was joined one last time by a couple of MAVERICK veterans in front of the camera.  Gage Clarke (Gun-Shy) appeared at least once in all five seasons, and his nervous demeanor is a perfect fit here.  Clarke's Foursquare Farley is that perpetual loser who has finally found a way to win. Farley is smart enough to keep his mouth shut to the locals, but he just can't resist telling the old Texas friend who remembers him as a barber.  While Bret doesn't neglect to bring up the legal and moral considerations concerning Farley's venture, interest-free "borrowing" is of secondary concern, of course.  The experienced gambler knows that Farley chose a game (blackjack) that will clean him out eventually (once a cardsharp shows up) and encourages him to quit while he's ahead (and free of debt). 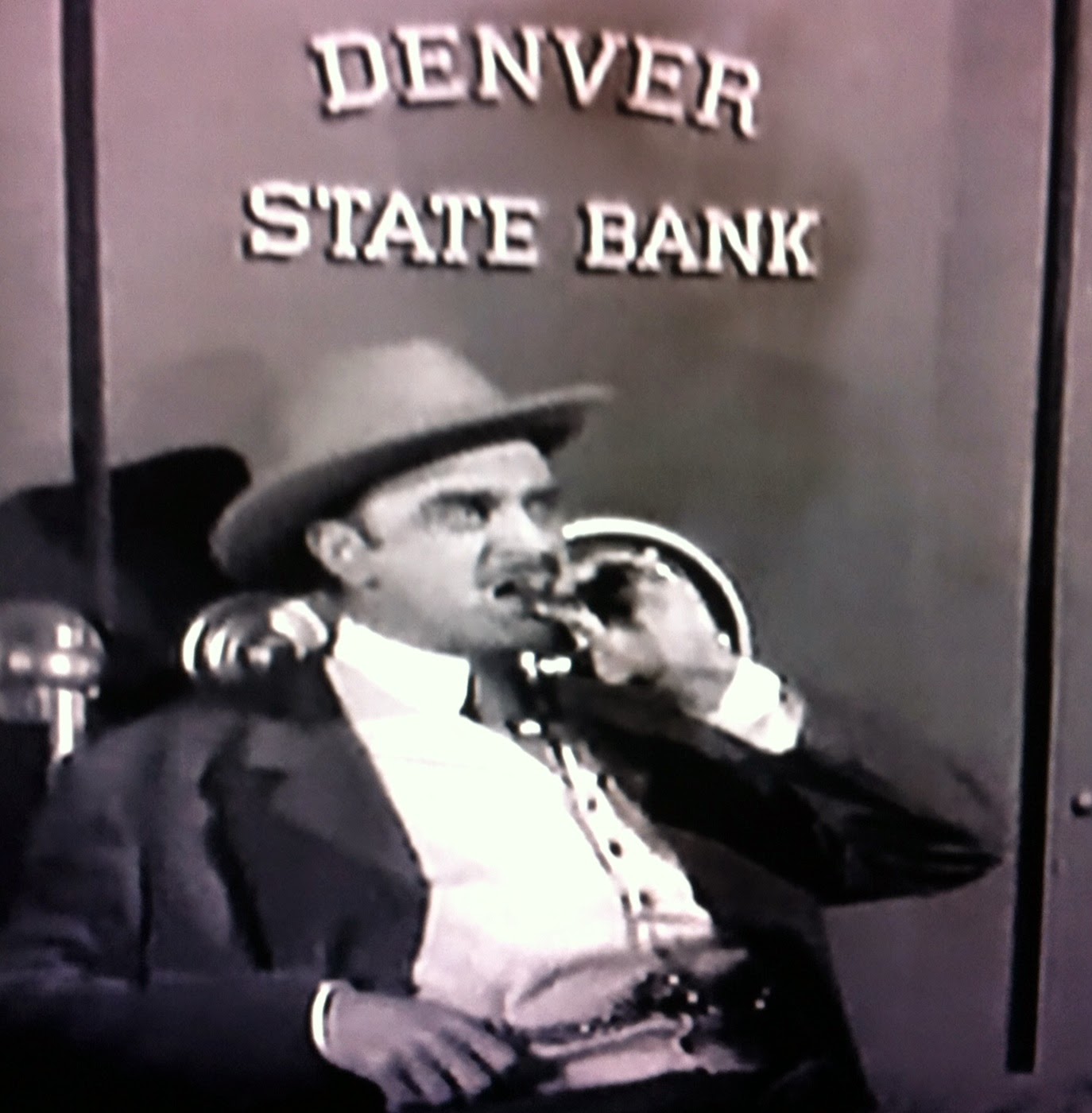 Legendary character actor John Dehner returns for a second con after Shady Deal at Sunny Acres, and gets a justifiably memorable entrance in an inspired moment from Lubin.  Dehner has several priceless reactions to the constantly moving millions that he is helpless to corral.  His Murphy resourcefully moves from robbery, to blackmail, to robbery again, and finally seeking a reward--but he's one step behind Bret at every turn. 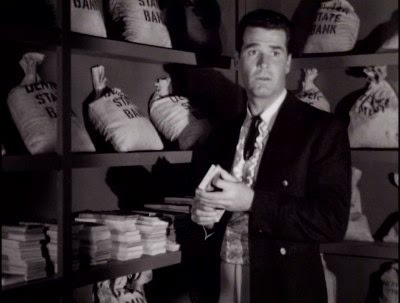 Frequently side-splittingly funny, Greenbacks, Unlimited nevertheless leaves a bittersweet taste if you're familiar with the fireworks that were transpiring off-screen at the time.  Three days before this third season finale aired (on March 13, 1960), Garner informed Warner Brothers that he was treating his contract as terminated after Warner refused to pay Garner's salary during a "causality period" during the 1960 WGA strike (which began January 16).  Garner refused to return to MAVERICK while the case was pending, and the 1959-1960 season would be the show's last in the Nielsen Top Twenty. 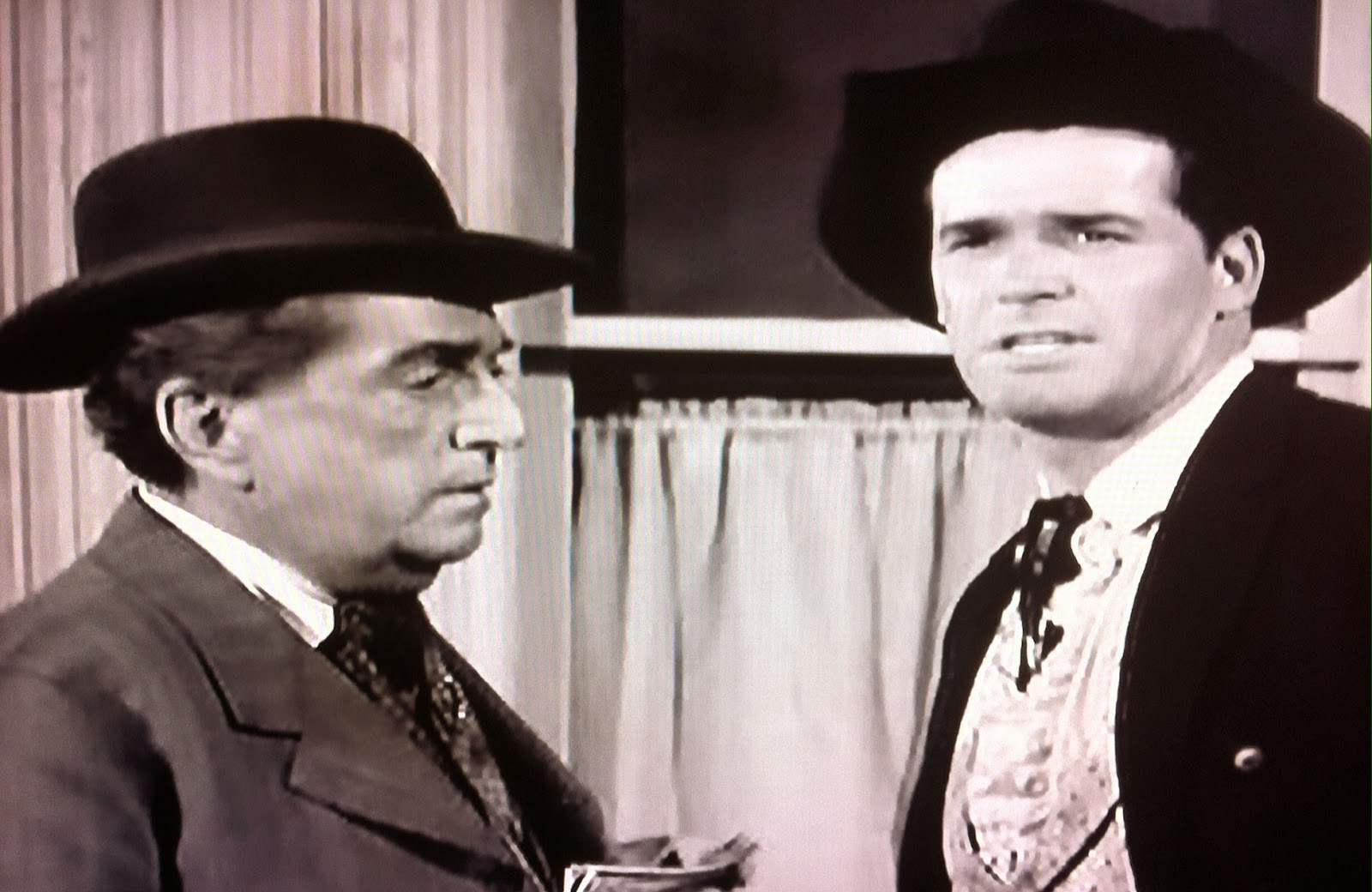 Warner Bros. Inc vs. Bumgarner was resolved in the actor's favor in November 1961, terminating his contact retroactively to March 10, 1960.  One last Garner episode remained (The Maverick Line had been held back as the intended fourth season opener), but it seems best to treat the sublime Greenbacks, Unlimited as the more suitable sendoff--it's by far the better installment.

Bret loses a dime--literally ten cents--playing penny-ante as he waits for his horse, and that's it.  Even though he's looking for a poker player, this opening hand ends up being the only one we see him play.  His planned game in Denver doesn't materialize as Big Ed leaves the table as soon as Maverick arrives. 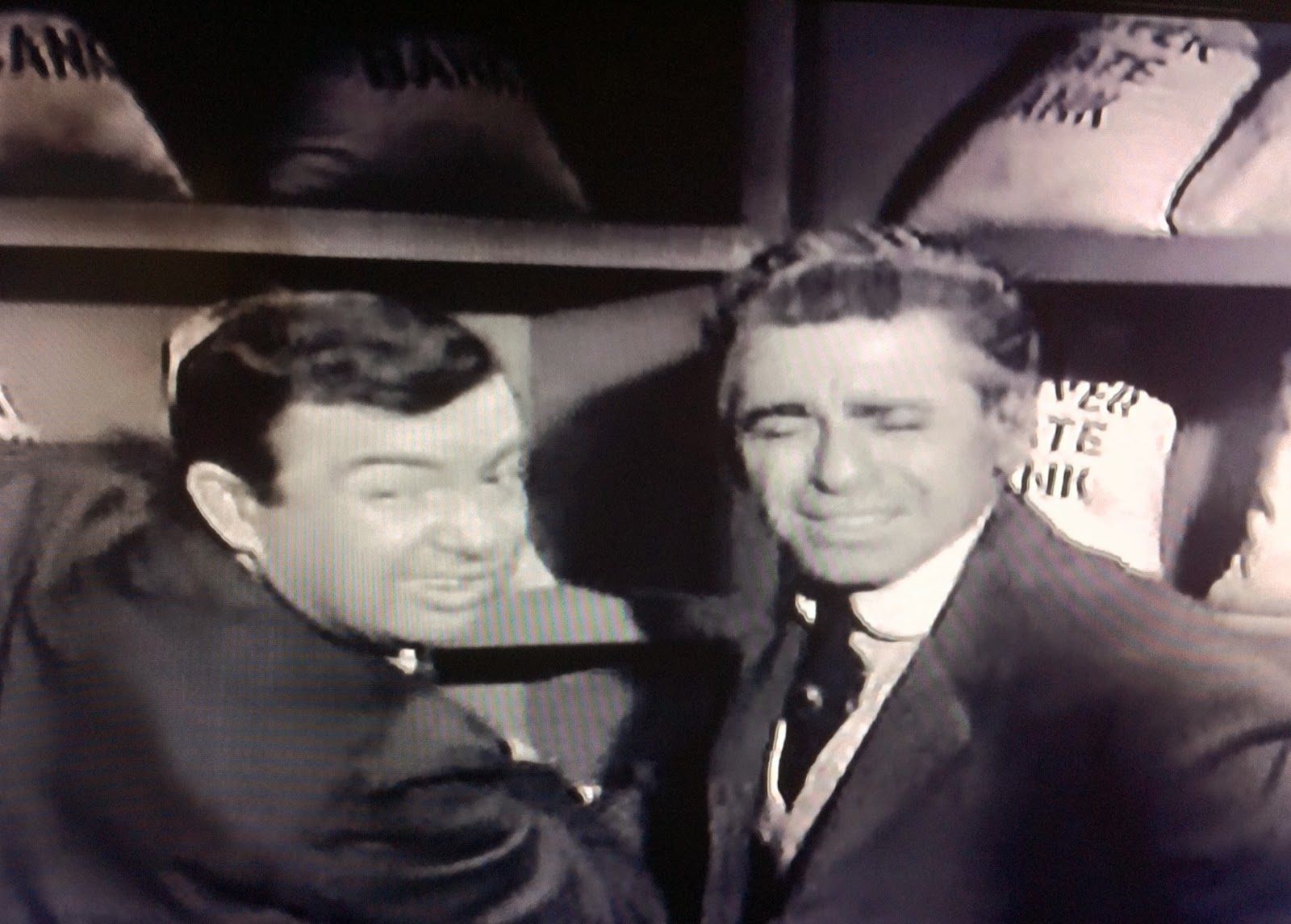 "He who fights and runs away will live to run away another day."  F Troop's Corporal Randolph Agarn would later co-opt this one, actually improving the wording (changing "fights" to "quits") but the Maverick original gets Pappy's point across effectively.

TIME IS OF THE ESSENCE:

This episode takes place no earlier than 1885.  Why?  Because both volumes of The Personal Memoirs of Ulysses S. Grant can be clearly seen in Farley's bookcase.

Robert Vincent Wright was probably the best writer to join the series after Roy Huggins' departure; he's certainly one of the few to come up with outstanding vehicles for Bret, Bart and Beau (The Bold Fenian Men).  While the settling of Bret's score with Tamblyn is a little rushed, Greenbacks, Unlimited is still a smoothly executed farce.  Lubin (his series finale) mines some terrific laughs from the constant movement of millions and a very smart foil who is still thwarted throughout.   (***1/2 out of four)

MAVERICK currently airs Monday through Friday at 1 PM Central/2 PM Eastern without commercial interruption on Encore Westerns, and every Sunday at 10 AM Central/11 AM Eastern on COZI TV.
Posted by Hal at 4:59 AM

Very entertaining episode. Notice that there were wooden sidewalks everywhere, but one place. During the run-around chase scene, there were concrete sidewalks. The first appearance was when Farley moved to the gutter to pick up a metal pipe to clonk one of the crooks with. Great show. Unique, really in its style. Arthur Lubin did not disappoint.