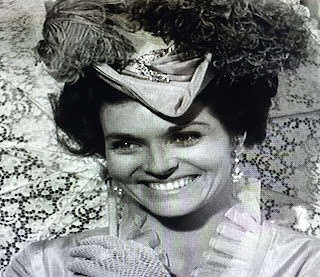 On a sunny day in Fort Courage, Sergeant O'Rourke and Corporal Agarn are hard at work inside their saloon with bartender Pete.  No, the thriving cornerstone business of O'Rourke Enterprises isn't open for the day just yet--before they can, there's whiskey that still needs to be watered down. 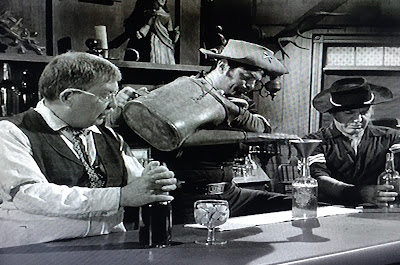 The slightest noise from outside makes good old Pete nervous, with some good reason: "Nobody knows you own this saloon!  Everybody thinks I own it!"  Corporal Agarn reassures the public face of the Fort Courage Saloon that they're doing nothing wrong--just "puttin' the chaser in the bottle!"  Easy to get away with, when your business is unchallenged for a hot and thirsty 109-mile radius.  Oh, and that ruckus outside?   The noon stage from Dodge City just arrived with pretty young newcomer Lily O'Reilly. 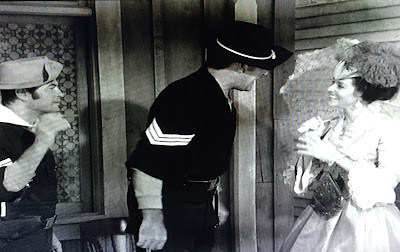 Agarn's reaction to her is fair representative of every other lovesick horndog Fort Courage male, but the more reserved O'Rourke proves to be as sharp an operator outside the saloon as in it, immediately catchin' on that she's a "daughter of the old sod".  Aye, but shrewd Miss O'Reilly pegs him as a "chip off the old blarney stone".  A promisin' beginnin', mind ya, but there's soon troublin' signs.... 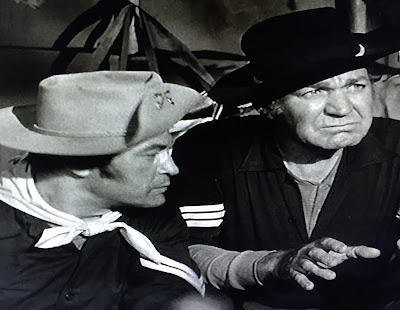 Lily plans to give the town a second female entrepreneur to go with general store proprietor Wrangler Jane.  And a rather progressive one, since she plans to open up a competing saloon to share that 109 mile radius with O'Rourke's.  That is, until she learns that a soldier on active duty is her competitor: a revelation that has her taking over the Sarge's lease with nary a struggle.   With 99 years (and an option for 99 more) secured, O'Reilly begins making successful changes, while seething O'Rourke watches helplessly as his business contacts and partners desert him one by one for the enchanting "new management" his saloon is under. 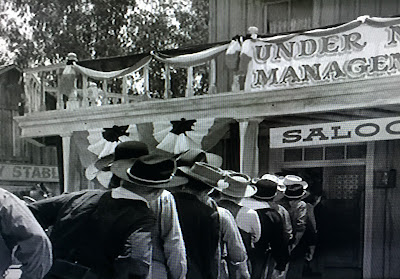 For the second week in a row after Honest Injun, well established O'Rourke Enterprises faces a challenge to the old master's throne.   For all of the Sarge's business sense, Ms. O'Reilly can match him in that category.  It's Lily's feminine wiles that give her a leg up, allowing her to simply blast through every roadblock the Sergeant can throw out: a lease, a liquor permit from the military governor (watch out, Jane!)...

..and even O'Rourke's heretofore iron-clad agreement with the area's only whiskey producer.  No one can look into her smilin' Irish eyes and say no.

The last of five installments helmed by comedy veteran Leslie Goodwins (the MEXICAN SPITFIRE series, countless Leon Errol RKO shorts), O'Rourke vs. O'Reilly moves merrily along while you're watching it.  By this time only two years from retiring (he died in 1969), Goodwins remains a maestro of visual gags, milking props (a cookie jar, the Captain's portrait of General Grant) for all they're worth and getting just enough mileage out of the distraction created by Lily.  Goodwins also knows when to quit, ending that recurring slapstick gag (featuring men falling off roofs and into water troughs) early in the second act.  One quibble, though: the director should have allowed this show-stopping visual to be the closer: 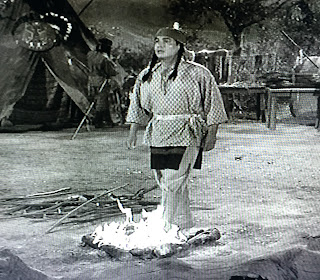 The underlying subtext in O'Rourke vs. O'Reilly: complacency created by O'Rourke's monopoly left him vulnerable to a hostile takeover.  After being served whiskey that is watered down and subpar (with "just a touch of moccasin"), the Sarge's customers wildly approve of the new owner's changes, creating a nine hour wait for entrance.  (To be fair, it's only six hours to get to the bar once you're in.)  A lesson is learned once everything is back to normal: for the grand re-opening, O'Rourke declares that they will "serve whiskey in our whiskey'"! 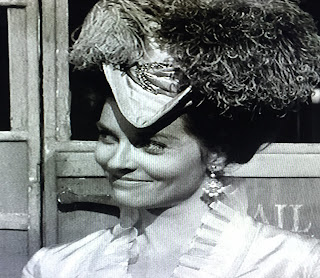 1955's Miss America, Meriwether is solid casting for the eye-pleasing business rival who causes even the Vice President of O'Rourke Enterprises to consider shifting loyalty ("I was a spy, Sarge!" he insists).  Speaking of Agarn, Larry Storch gets his usual chance to shine here, reprising his drunk act from CAR 54 in an effort to keep Fort Courage a "one sin town" and providing the outpost's new Temperance League with its tambourine as well as the urgency that drives this installment to its climax. 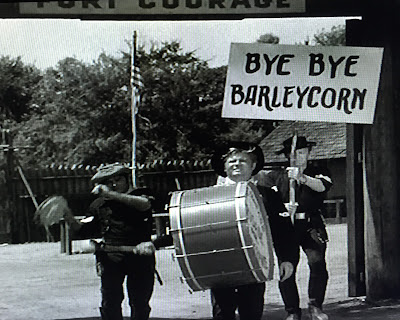 Said finale is the biggest flaw with O'Rourke vs. O'Reilly.  The donnybrook inadvertently started by preachy Agarn is "the Battle of Bull Run all over again", resulting in the demolition of the saloon and Lily O'Reilly's abrupt decision to go back to Dodge. 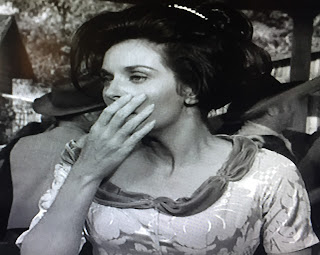 But it's a more awkward journey back to the status quo than usual.  Lily O'Reilly has every man in town wrapped around her finger (sans O'Rourke, that is), so why shouldn't she just move her saloon back to its original, unharmed building across the street?  The Sergeant is in no position to stop her, since she still has plenty of blackmail material to hang over his head.  (Strangely she only mentions his saloon ownership while on active duty, bypassing the much more serious infraction: a business partnership with the Hekawis!).  When she shows a romantic interest in her rival in the end--and that does make sense, as he's the only man who challenges her--she still seems to give up her budding empire way too easily. 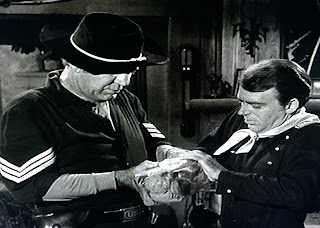 Wrangler Jane has only a cameo--strangely, no fireworks from Wilton's lovesick reaction to the new gal in town.  Crazy Cat and Trooper Vanderbilt are both missing from O'Rourke vs. O'Reilly, but Benny Baker makes the second of his five appearances as bartender/frontman Pete. 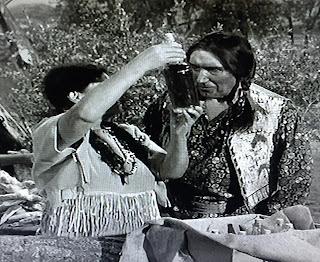 Clem Witherspoon is Fort Courage's never-seen man to see for building permit, and the first of many to disappoint the town's most prominent businessman.

There isn't a rattlesnake within fifty miles of the Fort--according to O'Rourke, it's because the clever creatures know there's a saloon there.

This segment must have taken place after 1874, when Bringing in the Sheaves was written.

Dobbs is pretty hopeless on the bugle, but he's Don Brewer-level competent on that drum.   He would later prove to be a talented flutist in That's Show Biz and would reprise his drumming on What Are You Doing After the Massacre?  Enough to make you think the army should consider a switch from brass instrument to woodwind, just this once. 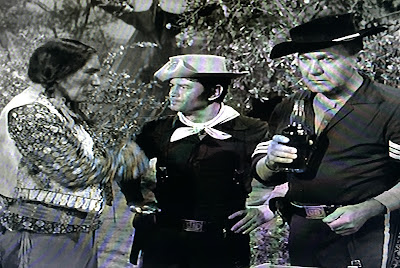 Once. As mentioned above, Lily O'Reilly certainly could have hung that business agreement with Wild Eagle over his head had she wanted to.  She must have really taken a shine to the Sarge.  Maybe she heard the rumors....

The ever-cheap studio found a way to re-use the barroom brawl footage from DODGE CITY (1939) yet again.  While the fit isn't seamless, it works better here than in A Fort's Best Friend is Not a Mother. 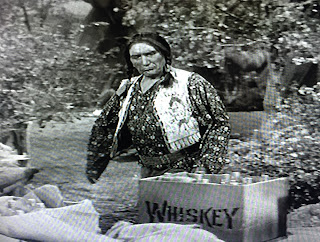 One string of comments to offend everyone, with Wild Eagle giving us the most sexist words of all--before he's face to face with Lily O'Reilly--that is.  The Chief laughs off warnings with the cringe-worthy declaration that "squaw is squaw"!  She quickly renders him speechless, so we get no words of wisdom from the wise one this time. 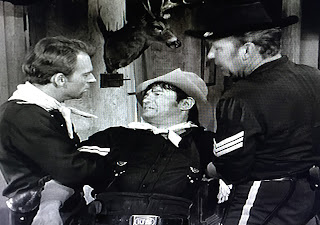 I overrated this one a little bit initially: the ending is way too pat and some comic potential goes unrealized.  That said, I don't want to knock it down too far.  Until that shakier-than-usual journey back to Fort Courage's existing state of affairs, O'Rourke vs. O'Reilly provides plenty of great laughs and one of the titular Sergeant's most formidable foes.  It's too bad Meriwether never reprised her role: Lily O'Reilly could have been to F TROOP what Samantha Crawford was to MAVERICK.  (*** out of four)

What was the name of O'Rourke's saloon?