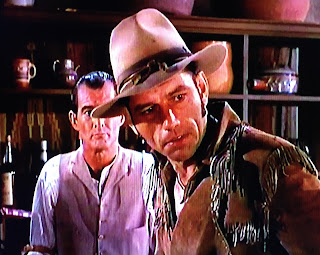 
Perpetual poker loser Corporal Barton is out on patrol with Mills, who is a frequent beneficiary of his fellow non-com's ineptitude at the tables.  The two soldiers are hunting for rabid animals amid reports of a hydrophobia outbreak.   After Mills rebuffs Barton's request for a loan, the Corporal commits robbery and murder, not knowing his crime is being witnessed by Hondo Lane's dog Sam.  After realizing he's being watched, Barton tries to eliminate Sam but fails to do so before Hondo's best friend escapes and rejoins the scout. 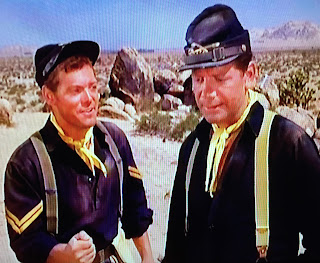 Back at Fort Lowell, Mills' horse turns up without him and Barton informs Captain Richards that he suspects his partner deserted.  Meanwhile, leery Fort Lowell residents are giving Sam a wide berth in the aftermath of the hydrophobia scare, and tensions intensify once Sam makes a growling lunge at his would-be killer in the cantina.  Corporal Barton slyly suggests that Lane's dog has gone mad, and then Johnny Dow is bitten by a white wolf that is driven away by Sam--with Hondo as the only witness.  With no human corroboration of Lane's version--that the child was bitten by a white wolf--outcry increases to destroy the canine, led by Barton and stern, dog-hating Liebel.  Sam is quarantined with Hondo given 20 hours to find the wolf before his pal will be destroyed. 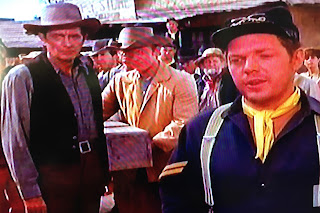 The independence that comes from "belonging to nobody but himself" and hunting his own dinner turns from asset to liability in the wake of a rabies scare.  Innocent Sam is shunned by Fort Lowell's populace on nothing more than rumors, then pursued by a bloodthirsty lynch mob on admittedly compelling, but circumstantial evidence.  Lane, Buffalo and little Johnny Dow remain loyal, and neutral Captain Richards resists any lawlessness, but man's best friend is otherwise surrounded by enemies in Hondo and the Mad Dog. 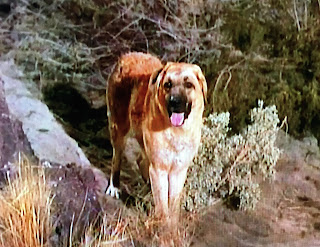 Fortunately for our dynamic duo, the much more enlightened Dr. Paul is at Fort Lowell to assist with the hydrophobia scare.  Back from studies overseas with Pasteur, the Doctor is available to treat Johnny Dow--and to see Hondo's reasoning, namely that infection would have Sam biting "anyone and everyone" instead of a select few.   His credibility buys Hondo a little time to find the white wolf, but not much--and even the good Doctor thinks that Hondo may be after a "phantom". 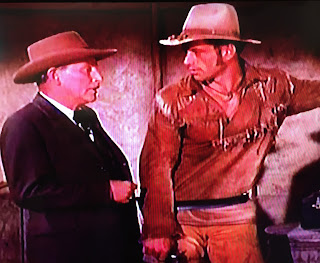 As a rule, genre takes on frontier justice are pretty grim affairs (witness the later Hondo and the Hanging Town), even a novel one such as this.  But writer Nat Tanchuck (well-suited for animal-centric westerns, with numerous episodes of FURY and MY FRIEND FLICKA behind him) provides a fair amount of levity.   Barton's laughably bad "system" (standing pat on middle pairs in a draw game!) makes the source of his "losing streak" obvious and Hondo gets to deliver several deadpanned zingers at stone-faced Liebel (well played by the always sonorous Royal Dano). 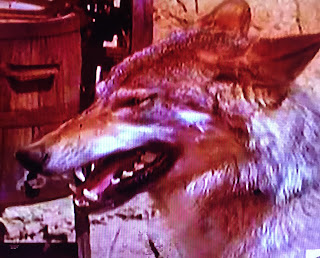 Director Arthur H. Nadel established his western bonafides with multiple episodes of THE RIFLEMAN to his credit, and went on to helm a couple of two part LASSIEs.  He handles the challenge of staging more extended animal sequences than usual for the series, with Sam, the guest wolf, and even a chicken figuring prominently into the plot. 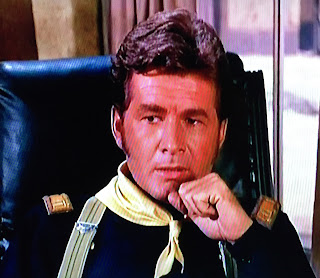 During its short run, two of the seventeen HONDO segments featured a main storyline exploring the bond between the titular character and his faithful canine, with Hondo and the Mad Dog being the less sentimental of the Sam-centric episodes.  Hondo might disavow ownership of Sam, but Lane's loyalty to his best friend is never under question.  Lane proves it again here, standing alone between Sam and the throng "foaming at the mouth" to destroy the dog.  (Given his zest for the duty, it's questionable that the "mad" pooch Liebel shot earlier was sick at all.) 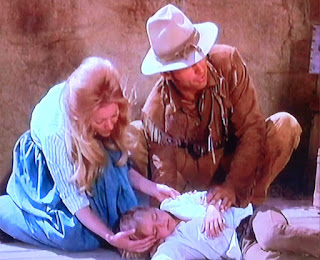 In fact, Hondo and Sam both come through in the clutch, rescuing each other by the time all is said and done, with extra kudos due the latter in my opinion.  Despite an entire town turning against him and wanting him destroyed, Sam bravely saves Johnny from a wolf and Lane from a killer who gets the drop on our human hero.  Does Sam's heroism get him any special consideration afterward?  Nope!  Ever the tough love advocate, Hondo goes off to have a steak dinner while sending Sam out to hunt yet another jackrabbit for his. 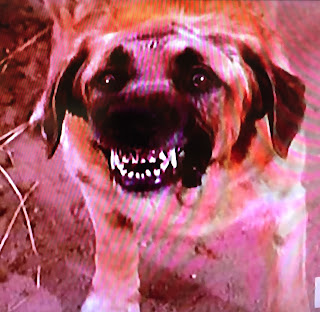 Uh, Hondo, you are aware that since the wolf didn't have hydrophobia, there might still be an infected animal out there, aren't you? 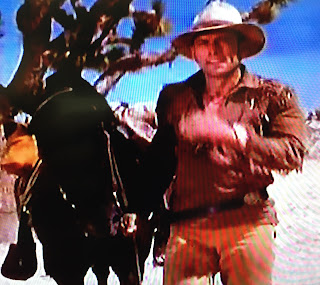 JUST A LITTLE AHEAD OF HIS TIME:

Dr. Paul mentions having had the opportunity to study rabies under Louis Pasteur, and specifically taking part in his successful discovery of a vaccine for humans.  However, HONDO is set five years after the Civil War (1870), some fifteen years before Pasteur's successful treatment of young Joseph Meister for the disease.


HOW MANY CANS OF WHOOPASS?

Self-righteous Liebel gets himself decked for making one too many threats to destroy Sam.  Later, Hondo needs a timely assist from his canine pal to subdue the guilty Corporal.  Sam actually does more scrapping than his human in Hondo and the Mad Dog, defending Johnny from the wolf and tangling with Barton twice before the climactic showdown. 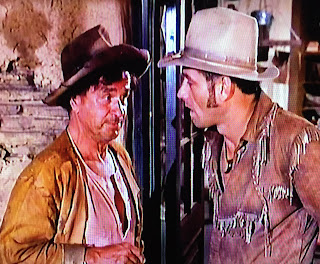 Lane stepped outside to do all his fightin' this time.  The only indoor skirmish was Sam's angry reaction to the man who attempted to stab him in the desert, and no furniture was harmed in the production of this television episode. 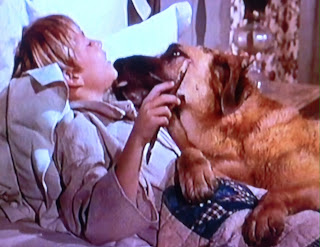 Hey, this one is all about Sam, what more can I say? 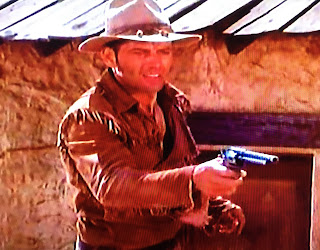 An episode focusing on Sam seems like a sure thing, and extra time with our four legged friend is always welcome.  While a statement against vigilante justice is far from novel for a western, this one is made in a unique fashion, with a surprisingly healthy dose of humor considering the subject matter.  Not quite as emotionally resonant as Hondo and the Gladiators but slightly better executed.   (***1/2 out of four)

HONDO airs every Sunday morning at 7:30 A.M. Eastern Time on getTV, and throughout the month of October getTV is airing a four episode HONDO marathon every Wednesday night starting at 8 P.M. Eastern.
Posted by Hal at 7:20 PM

Arthur Nadel had worked on The Rifleman, and presumably a few other Four Star Westerns, before Hondo, but is better known for his later work at Filmation during the 70's, at least as far as the Saturday morning crowd is concerned.