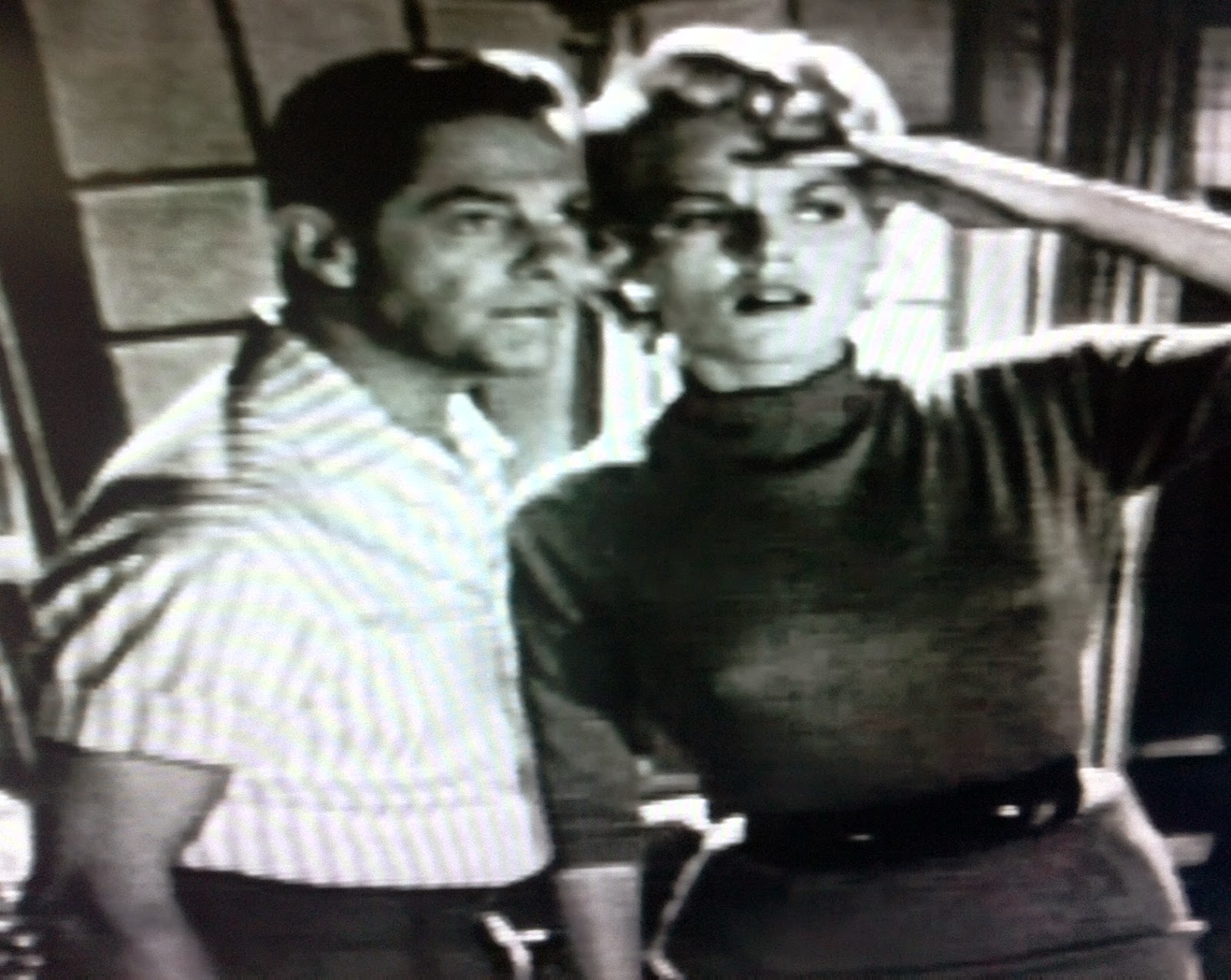 Arriving at home, Bob Collins finds himself getting the royal treatment from Schultzy, Margaret and Mrs. Niemeyer.  Oh, yes, they want something--Bob to play the lead in their charity play.  Uninterested in playing opposite one of the venerable ladies in the mahjong club, Bob successfully farms the starring role off on buddy Bill Lear and pats himself on the back for it.  Until he finds out that the leading lady is Tania Velia, recruited from outside the club's membership. 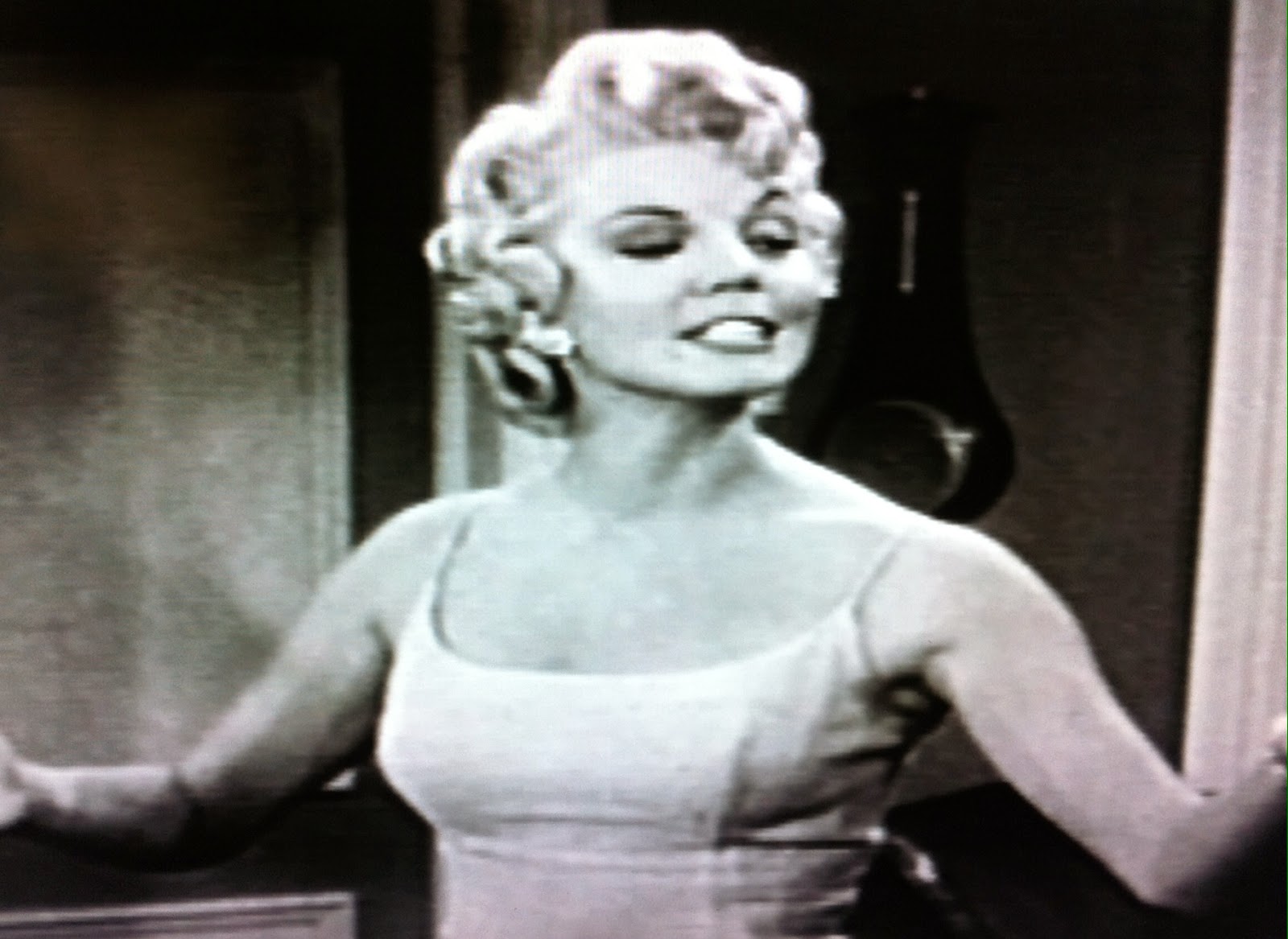 This discovery greatly increases Bob's enthusiasm for the cause.  In fact,  he feels so strongly about it he reconsiders taking on the starring role.  Unfortunately for him, Bill isn't willing to concede the stage (wonder why?) and the ladies in the club are unanimously in agreement to move forward with "Lover Lips" Lear.  So Bob graciously steps aside and offers sincere support to the actors by taking on the decidedly menial task of being stage manager. 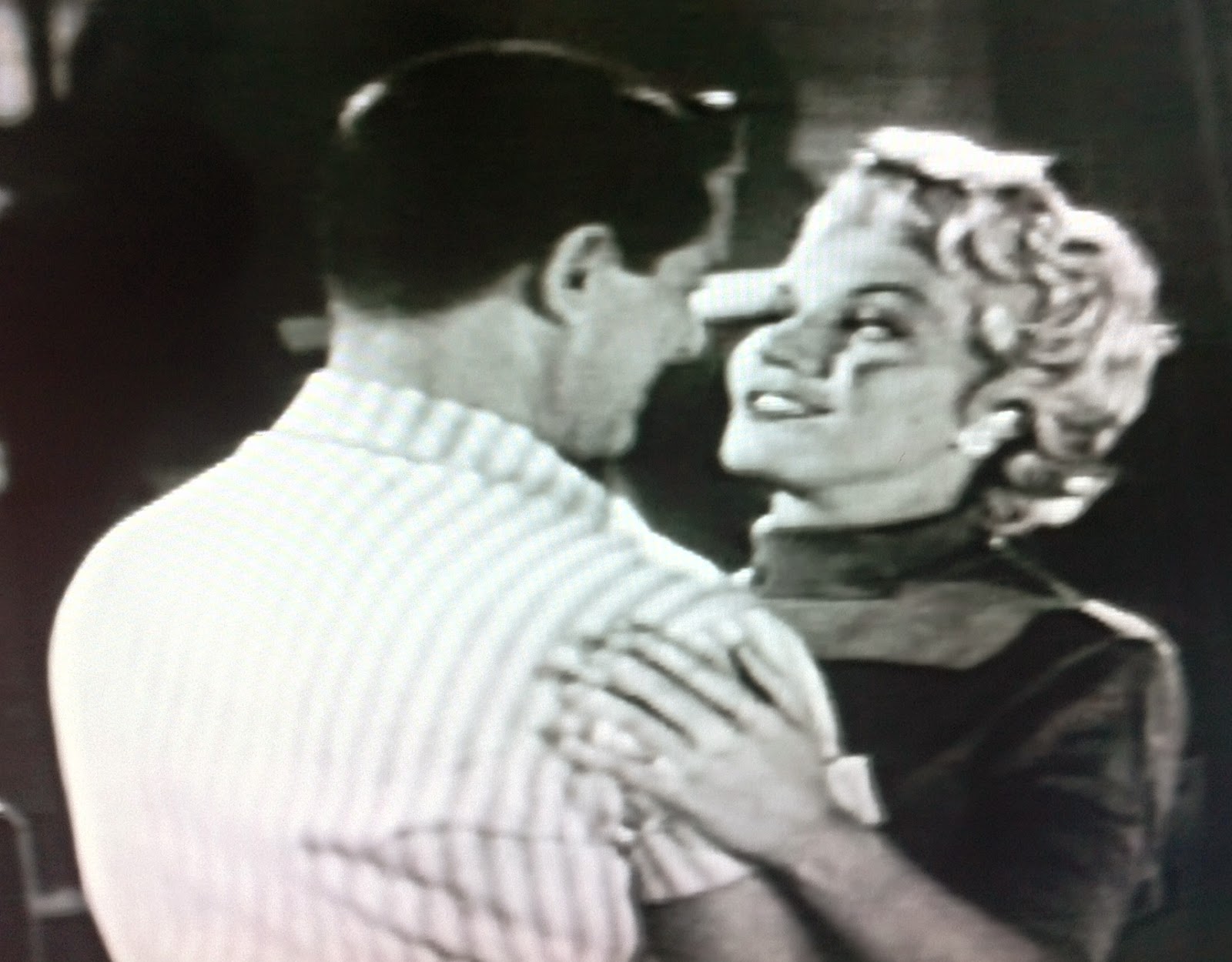 For all of his now-quaint pickup lines and theatrical mannerisms, Bob Collins might have been the edgiest sitcom character of his decade; Sergeant Ernest T. Bilko and George "Kingfish" Stevens provided his only real competition.  Bilko and Kingfish were money-hungry; Bob's appetite ran towards the carnal.  But what gave LOVE THAT BOB an extra bit of subversion was a creative team (led by Executive Producer George Burns and Producer Paul Henning) that allowed the protagonist to often succeed in his nocturnal quests--even as he's officially receiving his "comeuppance".  Matter of fact, in Bob Gives S.R.O. Performance, he isn't rebuked at all, if you ask me. 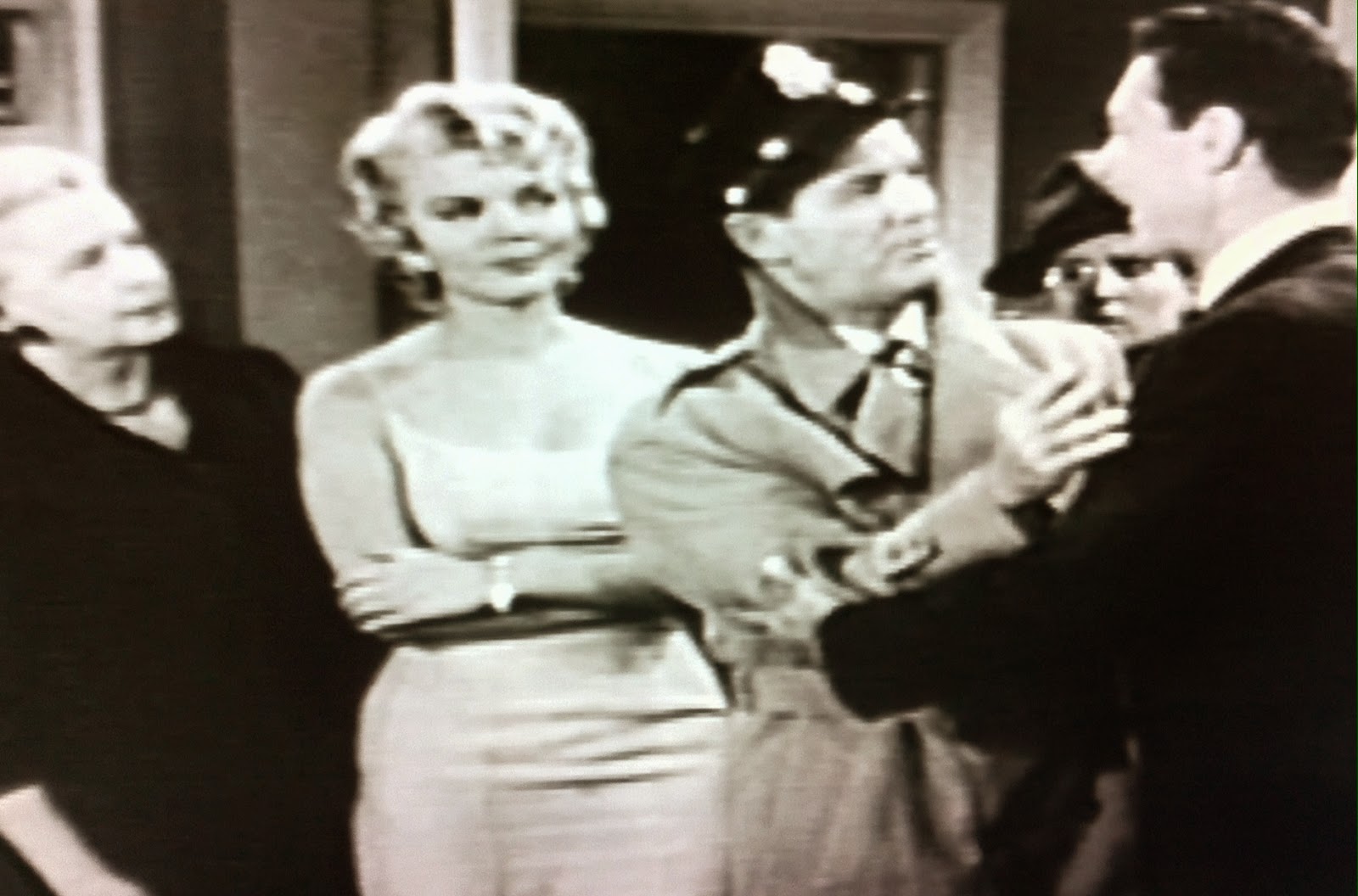 Collins manipulates the ladies into accepting boring non actor Bill Lear as a romantic lead, and friend Lear into giving up his evenings and taking a long cab ride out of his way to rehearsals.  When the gig turns out to have unanticipated fringe benefits, Bob tries to weasel his way back in with tricks and double talk.  He later resorts to ruining an entire night's rehearsal (for a charity performance, mind you) and blatantly misrepresenting himself to an aspiring starlet at least fifteen years his junior ("Oh, yes, I've literally made hundreds of pictures") while plying her with wine.  Bob's punishment for his transgressions?  The ladies and Lear decide not to interrupt Bob--instead they sell tickets to the real show in progress.  So Bob sweeps the blonde beauty off her feet in front of 260 paying customers, not only getting his heart's desire but looking like a bigger stud than ever to a large crowd.  Yeah---paybacks are Hell, huh?

LOVE THAT BOB offered a "who's who" of up and coming starlets like no other show of its era.  Within a single month in 1958, Angie Dickinson, Patricia Cutts, Joi Lansing, Lisa Gaye and Tania Velia all appeared as Bob's dates (fella gets around!).  Twenty-three year old Velia was making her television debut in Bob Gives S.R.O. Performance, eponymously playing a fictional version of herself (as Ingrid Goude and Anna Maria Alberghetti would in other episodes).

A Yugoslavian refugee, Velia was reported to be a member of the Olympic swimming team who refused to return to her native country after a competition in Austria in 1955.  Fluent in six languages, Velia (born Tanja Ivelja in 1935) sought asylum in the U.S., arriving in May 1956.  For Tania's introduction to American viewers, director Cummings gave her quite a showcase.  Starting with her legs, all that we saw of her as she stepped out of the shower to answer Schultzy's phone call.

That view didn't escape screen Bob's notice, either, and the director elicits a laugh out loud moment via the trusty old "dream balloon sight gag" later. 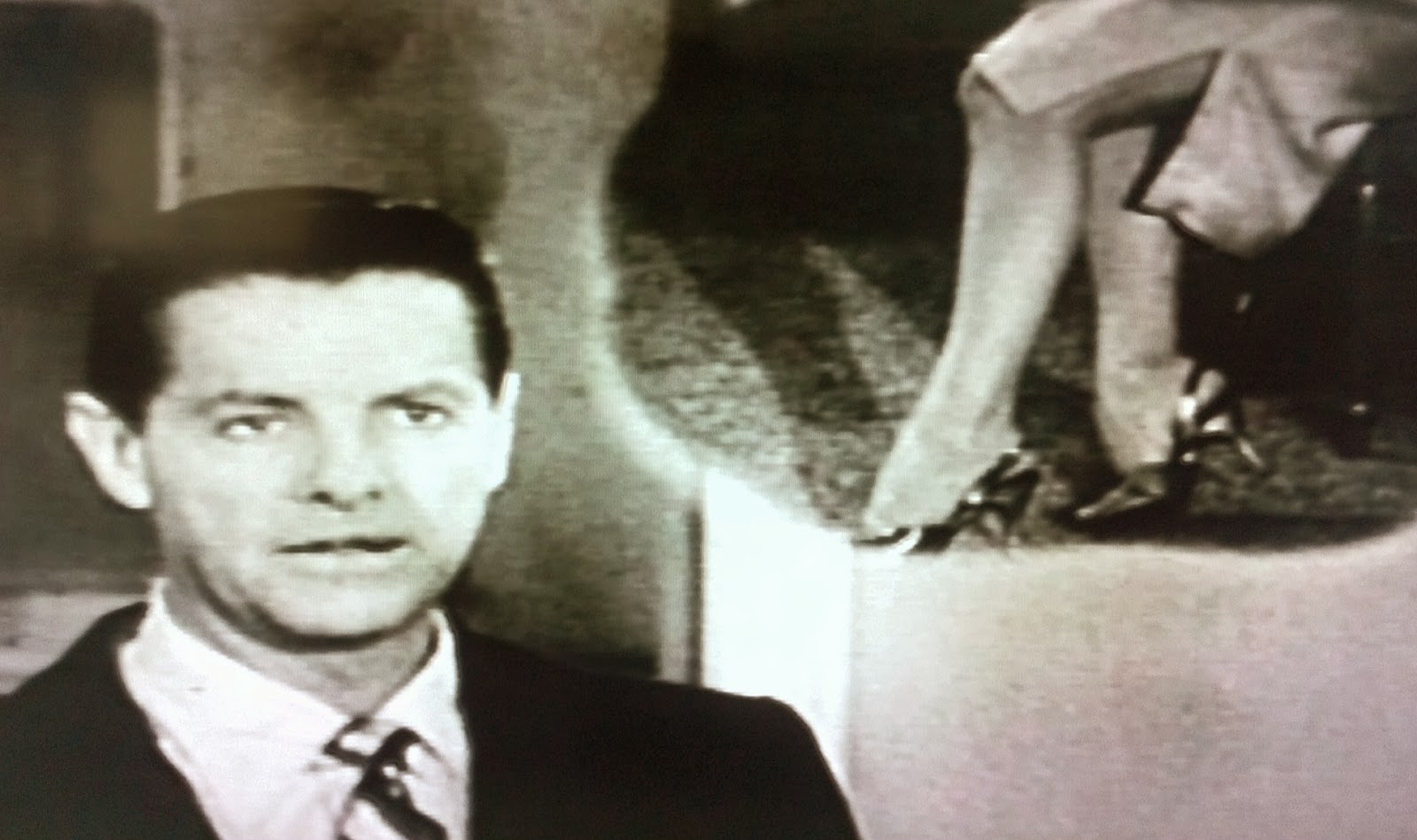 Focusing on her gams was understandable, but Velia gets equal time for her other attributes.  A sultry singer, Tania makes a spotlighted entrance singing "Tame Me" to a leering Lear, and also elicits laughs as she (initially) erects an iron curtain of resistance for our photographer turned stagehand.  Twice a Playboy Playmate, Tania Velia later starred in THE FIEND OF DOPE ISLAND, toured the U.S. as a singer and recorded several Spanish language LP's during the Sixties.

Schultzy, for her usual reasons.  We learn from her that Tania caught Bob's eye a couple of weeks before the play, and Schultzy knew this--but didn't tell him that she lives across the hall from Tania, since even after 125 episodes she's still pining for the boss.  Later, Bob tries to maneuver his way into driving Tania home from rehearsal--but guess who gets her in the car first? 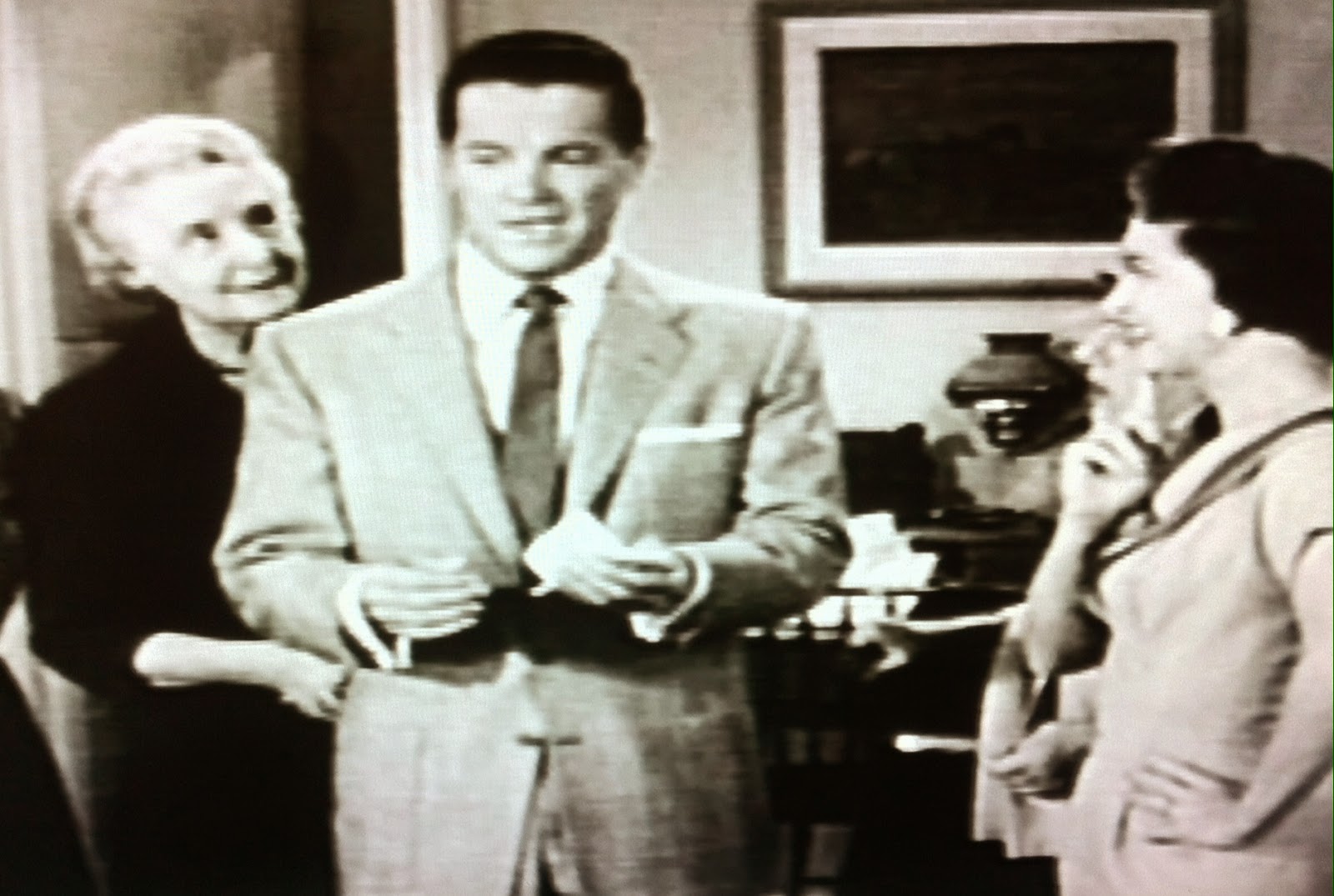 I'd say a resounding "yes" this time, after a slow start.  The last we saw of his titular performance, Bob appeared to be as big a hit with Ms. Velia as he was at the box office.  Not bad for a weeknight, and Bob says we shoulda caught him on the weekend before! 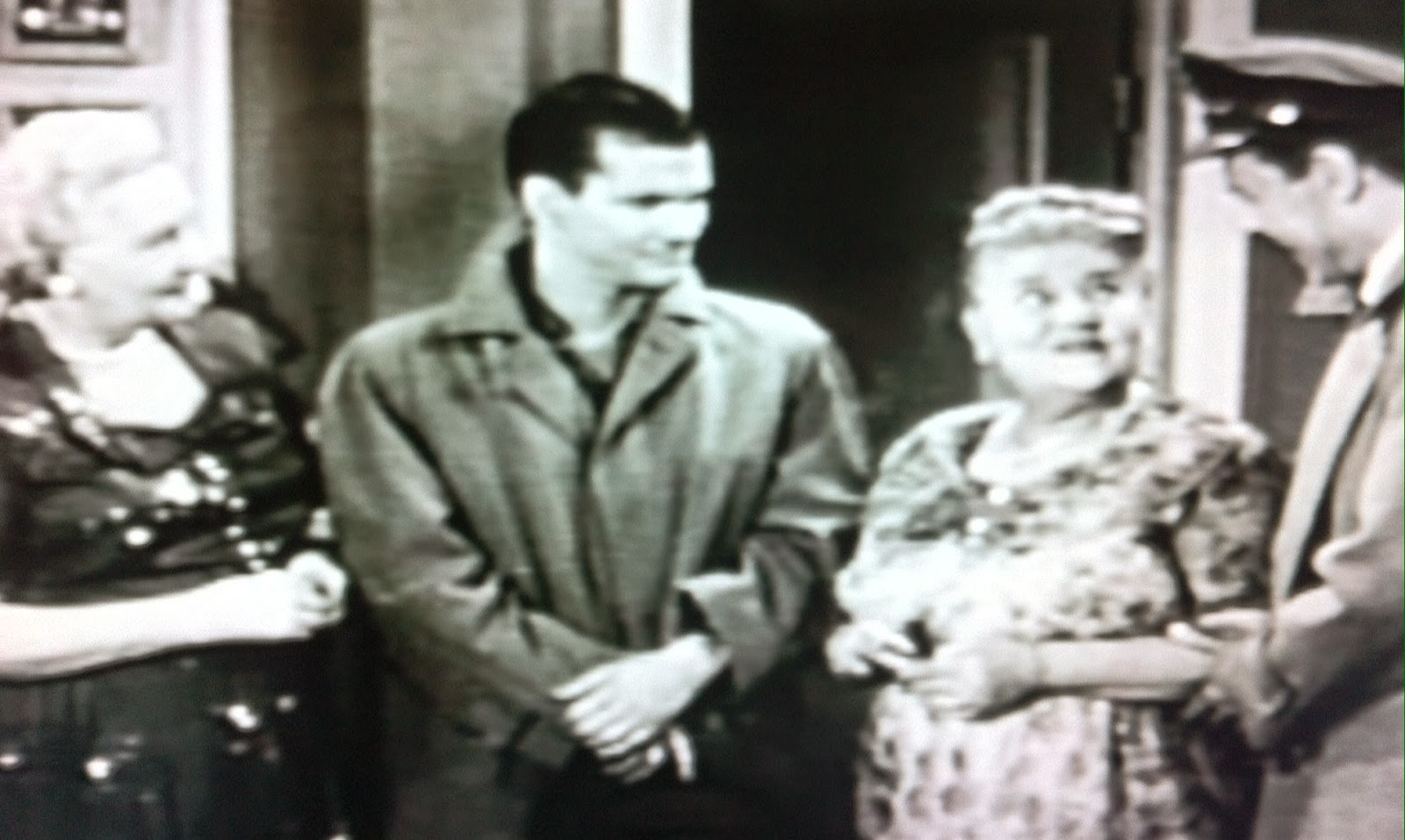 As I've noted previously, actor Bob Cummings was surprisingly assured behind the camera, and in Bob Gives S.R.O. Performance he again displays his knack for sight gags and his considerable skill in directing inexperienced actors.  The Henning/Gordon/Wesson team was a well-oiled machine throughout this fourth season, remarkably consistent at churning out laughs--particularly guilty ones.  Bob Gives S.R.O. Performance is yet another example of just how far producer Henning and director Cummings could go within the bounds of the obligatory circa 1958.  (**** out of four)

Bob Gives S.R.O. Performance is available, along with 39 other episodes (4 per DVD) at Shokus Home Video.