Television's Greatest Moments: (Some of) The Best of Larry Storch 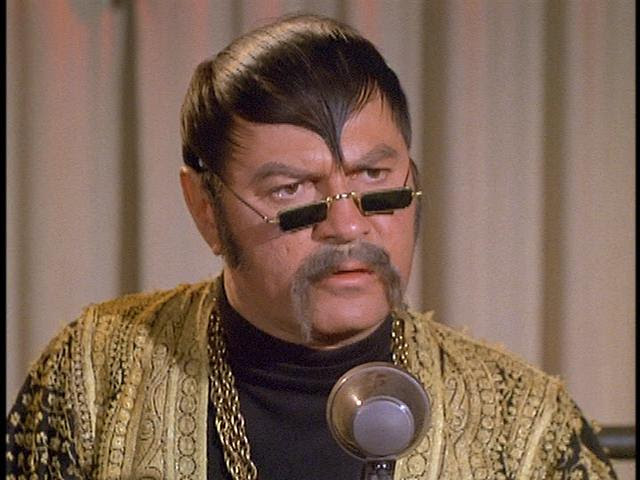 The great Larry Storch turns 96 years young today!  While he has his own saloon in New Jersey, a star on the Palm Springs Walk of Fame, and (according to MARRIED...WITH CHILDREN) the world's premier School of Acting, it just doesn't seem to be enough to properly honor him.  There definitely needs to be a statue of this man somewhere.  Preferably one at least as tall as the one of Sam Houston outside Huntsville, Texas along I-45.

Until some wise person makes that happen, we'll just have to celebrate by remembering just why Larry Storch is a national treasure.  Let's take at look at some of his classic television moments apart from his best and most famous television role, that of the incomparable Corporal Randolph Agarn on F TROOP.

It's hard to believe that Storch played Charlie the drunk on CAR 54 only three times; like Ernest T. Bass, it seems like he was there a lot more often.  His drinking might have been overstated, since he could actually get drunk without drinking a drop.  You don't believe me?

Sticking with Nat Hiken-land, Larry made two appearances on Hiken's 1950's classic, giving us a preview of the crying act that would become much more prominent in the next decade:

Introduced by host Janet Leigh, Storch treats the prime time audience to some of his standup act.  Forrest Tucker and Ken Berry joined in the fun, but Storch got this bit to himself:

A dramatic role, with Edd "Kookie" Byrnes co-starring, and Storch bringing plenty of humor of his role in this tale that has echoes of OCEAN'S ELEVEN:

Like his frequent co-star Forrest Tucker, Larry made only one COLUMBO appearance, but what a scene it was!  Storch has the misfortune of being Columbo's driving instructor, and also has a field day with it:

There's many, many more classic Storch moments, but I don't want to spend the whole night on YouTube.  Suffice to say, happy birthday, Larry Storch!  Hopefully there's more television magic to come in the near future from the Storch---he is, after all, only semi-retired.
Posted by Hal at 6:15 PM

What? Nothing from "Kolchak: The Night Stalker"? "I Dream of Jeannie"?
"Grizzly Adams"? "Ghost Busters"?

I agree the Jeannie episode rocks. And the Grizzly Adams reunion with Forrest Tucker is cool too.

Check out "An Out For Oscar" on The Alfred Hitchcock Hour.
Larry plays a meek bank teller who's getting "set up" by a femme fatale and her rotten real guy (played by Henry Silva, naturally); their plan doesn't go as expected …


Also, an early episode of Mannix called "Another Final Exit", where he's an ex-con who stumbles into someone else's criminal plot.


There are probably a bunch of others, but these are the ones that sprung to mind.


I also can call to mind Larry Storch on talk shows (mainly Merv Griffin) wherein he would recreate Late Show movies, playing all the parts: Larry could imitate just about every character actor there ever was.

Mike, hobbyfan, thanks! With a half century of appearances to choose from, it was hard to narrow it down to just six. Mike: thanks for those two mentions; I like both MANNIX episodes that Larry appears in. He returned during the show's final season if memory serves. And yes, the HITCHCOCK episode is also outstanding.

A good dramatic appearance is in the made for TV movie "Hunters are for Killing", with Burt Reynolds in 1970. Good case in it, including Melvyn Douglas and Suzanne Pleshette. Would love to review the film here but I haven't seen it in decades.

I almost posted a scene from his memorable ALL IN THE FAMILY appearance in 1973, or a Jackson Farrell scene from GILLIGAN, etc.

Hell, I could have made this a week of posts.

Great clips all! Storch's Charlie on CAR 54 is a favorite. The man did so much. Consider his voice work: Phineas J. Whoopee on TENNESSEE TUXEDO, GROOVIE GHOULIES and a bunch of voices on Filmation's BRADY KIDS cartoon. And someone already mentioned his reteaming with Forrest Tucker for THE GHOST BUSTERS, a woefully underrated and underappreciated series.

Also underappreciated is Storch's dramatic talents. Not mentioned yet that I see was an appearance as an old friend of Archie Bunker's on ALL IN THE FAMILY and--my personal favorite of his dramatic roles--as Angie, a childhood friend of Danny Wilder's, on THE PERSUADERS. He was so good and held his own playing opposite Tony Curtis and Roger Moore. Must see TV for Storch aficionados!